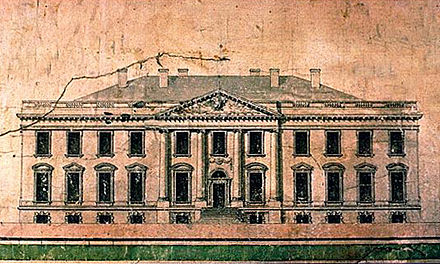 One of Hoban’s amended versions of The White House. Photocredit: Wikipedia

As you can imagine, when George Washington became the president of the United States he had a lot on his plate. So tasks like designing a new capitol building were a little, well, beyond him. He asked Thomas Jefferson to announce a very important competition, with very simple guidelines: design the capitol building, and you get $500 and a plot of land in Philadelphia.

Washington had a vision, despite not being able to design the building himself. He knew that the structure had to be more than a place to live; it had to be a symbol of our fledgeling nation. Independence was first on the list. Washington could not live in a palace, since America is a republic, after all. However, one must keep in mind that the massive stone structure was to be a “futuristic” building, and the largest one in America.

The designs came in, and none caught his eye like that of James Hoban’s design.  George Washington himself laid the cornerstone on October 13th, 1792, which was promptly stolen by freemasons. They had the best intentions when they inscribed the stone with the date of construction- and they also had the best intentions when they drank too much. They forgot to document where the stone ended up. 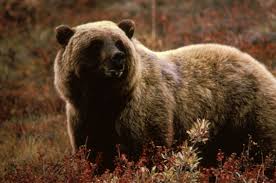 Imagine THIS guy on the North Lawn. Photocredit: Wikipedia

And Mister Edwards wasn’t the only one!

Captain Zebulon Pike sent President Thomas Jefferson a letter- and two bears- in October of 1807. He bought the grizzlies from a Native American man and the bears were carried by horseback hundreds of miles back to the capitol. Jefferson had no intention of keeping them; the ferocious reputation of grizzly bears preceded the cubs.

Until Jefferson had them sent to Peale’s Museum, a collection of natural history, the bears had a two month stay on his front lawn. This earned it a nickname: The Bear Garden. Jefferson’s bears didn’t fare so well while caged in the museum. They busted out and roamed the halls freely before going from “live exhibits” to…well, just exhibits.

By the time Jonathan Edwards arrived on the scene with Teddy Roosevelt, 1901 was a time to be alive for a whole array of Roosevelt’s pets. In addition to the third bear to live in The White House, the Roosevelts owned countless snakes, dogs, Maude the pig, Baron Spreckle the hen, a one-legged rooster…the list goes on. 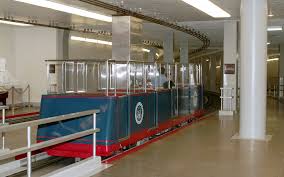 The original line was built in 1909 and connected The Russell Senate Building to The White House. The “electric bus” was replaced with a monorail in 1912. In 1960, trolleys were installed. They are still used on the shortest lines from the Senate to The Russell Senate Office. They don’t have sides, or a roof or that matter. I would guess that even though these are like subway convertibles, they aren’t quite as popular.

The newest editions are completely updated. They are efficient and are fully automated to get congressmen and officials from one place to another in a secretive and safe fashion. Don’t get excited- you need special ID’s to hop on these trains.

4. There’s A Way To Live In The White House… Sorta. 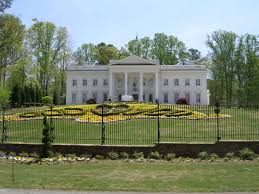 Your own White House on your own Capitol Hill in Decatur, GA. Photo credit: Wikipedia

There are replicas of The White House located in Decatur, GE, McLean, Virginia, Hanzhou, China, And Carlsbad California. Each has their own special twist: some have meticulously copied the furniture, the drapes, everything possible. Some are more modest, or  are more poignant, examples of patriotism.

Possibly the most endearing of these replicas could be the one in McLean, Virginia. An immigrant from Vietnam built this using blueprints of The Whitehouse as a way to honor his adopted country.

In the meantime, the U.S. government is on the prowl for new training grounds. They offered a mere $8 million for the replica in Decatur; only time will tell if they win, considering it’s nearly two million shy of its original market price.

Better strike while the iron is hot! Why not celebrate Independence Day with your new White House?

5. The Statue of Freedom Went Through Hell and High-Water 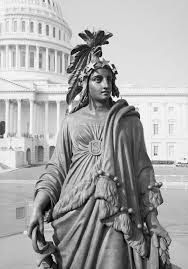 No, not the Statue of Liberty. The Statue of Freedom sits atop The White House and crowns the capitol as a symbol of the importance of our independence. Crowned with a helmet and bearing a sword, the woman is more reminiscent of Roman goddesses of war.

Thomas Crawford was in charge of the design and construction of the statue. Born in New York, he worked on several projects with U.S. officials before heading to his studio in Rome to create this lovely lady. He began making small sample sculptures before the third and final sculpture was approved in 1856.

After his sudden death in 1857, his widow took responsibility of shipping his completed sculpture. The sculpture, now packaged in six separate crates, began its journey in 1858. Shortly after leaving port, the ship sprung a few pesky leaks that persisted after a brief stop in Gibraltar for repairs. The crates were stored in Bermuda until half made it to New York that December. All the pieces finally made it to Washington DC in March of 1859.

The statue was then further honed and crafted- a process that extended all the way until its official installation on December 2nd of 1863.