If you happen to be in Cleveland, Ohio and want to check out something a little different, just turn at the end of Rowley Avenue and head for the “soft glow of electric sex” in the window. I’m talking, of course, about Raphie’s home, the one that was used in the holiday classic, A Christmas Story. It is now A Christmas Story House and Museum and every detail from the film has been preserved for you to enjoy…all the way down to the infamous leg lamp in the window. 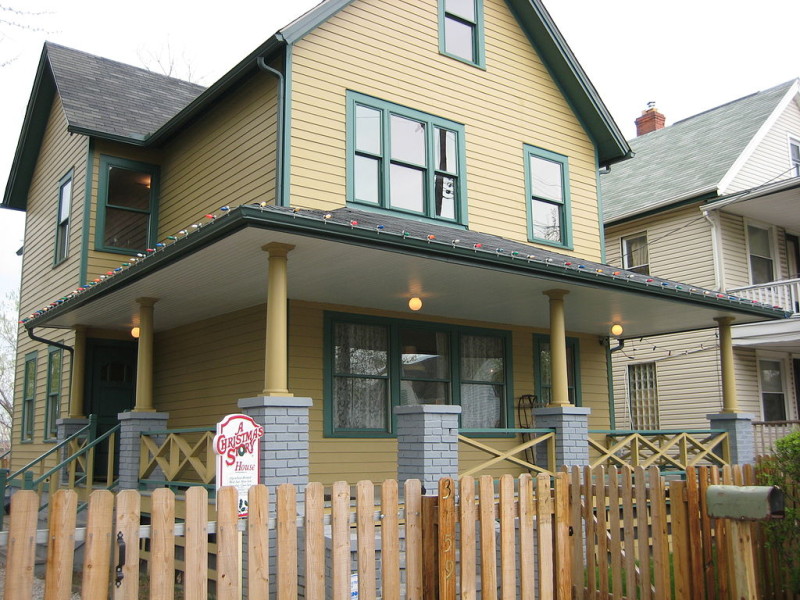 The museum is the brain-child of Brian Jones, a fan of the film since first watching it in the 80’s as a child. After getting out of the Navy, Brian began a lucrative online business from his condo – building and selling the iconic symbol of this cult classic; the glowing leg lamp. Then in 2004, he decided to take his love of the film, and his entrepreneurial enterprise, a step further and purchase the Parker family home from the film at auction for $150,000. He put in $240,000 in renovation costs and opened the home as a museum.

A Christmas Story House is open year round to the public for tours. The interior of the home has been remodeled to match the film – the actual interiors for the film were shot on a sound stage in Canada. Although not an exact match, if you’re a casual fan you will feel like you have been transported into the movie you remember as a child. If you’re an uber-fan, we can’t really help you…no one can.

Replicas from the film are placed throughout the house; the red bar of Lifebuoy soap in the bathroom, Ralphie’s “pink nightmare” pajamas are hanging from a coat rack and of course there’s the Red Ryder BB gun – just waiting for you to shoot your eye out.

Across the street from the house is the official A Christmas Story House Museum. The museum features original props, costumes and memorabilia from the film, as well as hundreds of rare behind-the-scenes photos. Here you’ll find Randy’s toy Zeppelin and his overstuffed snowsuit. As well as the coonskin cap worn by the bully Scut Farkus. They also have the original Parker family

This year marks the thirtieth anniversary of the release of the film “A Christmas Story,” and in preparation, A Christmas Story House and Museum has several events planned.

Admission is $10 for adults and $6 for children 7 – 12. Tickets include access to both A Christmas Story House and the accompanying museum. It’s definitely a must-do if you’re a fan of this classic holiday film.