Albany has been an incubator of American culture since the very beginnings of the New World. Established by the Dongan Charter nearly 330 years ago, the city was a capitol of the trade market before becoming a rebel capitol during the American Revolutionary War. Albany’s ideal location allowed revolutionary forces to breathe and establish allegiances; 330 years later it is still a place to catch your breath, observing history and culture meander between one another on its historic streets. 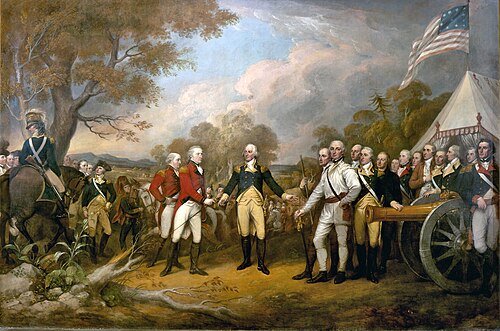 Revolutionary forces regrouped in Saratoga before an epic battle. With the help of the French, we can call this portrait “Surrender of General Burgoyne” … #winning. Photocredit: Wikipedia.com

Just beyond the streets of Albany you can find the legendary Saratoga Springs. While Saratoga itself has a history of battle and bloodshed, Saratoga Springs exists in a world of its own. Over a hundred years ago, businessmen stumbled upon the beautiful waters and decided to build spas— maybe they wanted to bring back the Beverwijk entrepreneurial spunk. Saratoga Springs is nestled in the quiet, lush foothills of the Adirondacks— the pattering of the spouting water accompanies the view in a way that makes it easy to believe in the mythical healing powers of this area. The entire Saratoga region now embodies peace with green living, active lifestyles, and a killer— well, an awe-inspiring view.

Within Saratoga there are even public springs for city-folk to enjoy. Talk about refreshing! Photocredit: Wikipedia.com

If you’re craving a more high-speed environment, the good news is that the valley feel of Saratoga extends into Albany. In downtown, generations collide at farmer’s markets and shops. The farm-fresh ingredients find themselves in professional kitchens and kitchens at home, making Albany’s local produce movement a true success. To top it all off, Albany has a yearly Tulip Festival to honor its Dutch roots. Visitors can take part in traditions crowning the Tulip Queen and the Royal Tulip Ball while admiring over 100,00 blooming bulbs. If that sounds too frilly, you can always find something to do! The family-friendly event has an abundance of entertainment for kids and grown- ups alike. Local craft vendors display their work, the aroma of fresh food is everywhere and musicians from all over come to perform at the festival.

Health, history— and what’s the third “H” of Albany? Horses. Check out this article about The Saratoga Museum of Horse Racing, a tradition that is celebrating 150 years of roaring crowds, beating hooves, and crowning champions!