On January 1st, 1914, Tony Jannus made aviation history by completing the first commercial airline flight from St. Petersburg, FL to Tampa. The flight only took about twenty minutes, but it became one of the most important events in aviation history – ushering in the modern era of commercial aviation. 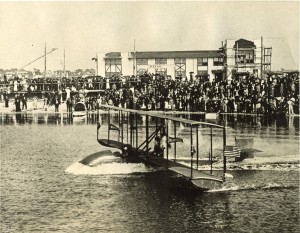 Why was this so important? Until then, the same trip took roughly seven hours by train…five hours by car (on some very rough roads)…or a three hours by boat with enough stops along the way to drive you insane. This flight changed the city of St. Petersburg and aviation forever.

In commemoration of this historic event, Kermit Weeks, creator and founder of Fantasy of Flight, has decided  re-create this ground-breaking flight. The original aircraft, a Benoist XIV flying boat, doesn’t exist anymore – there are only replicas hanging in museums. So to be true to the event and history, The team at Fantasy of Flight, have been busy re-creating the aircraft from scratch. Without original plans, the team had to research, design and build not only the aircraft but the engine as well.

The planning phase has entailed months of research and travel to obtain original plans and photographs, which we are analyzing to the tiniest detail. Since no Roberts 6X engines exist anymore, we are manufacturing one from scratch—with absolute authenticity as the standard. – Kermit Weeks

The Tony Jannus Distinguished Aviation Society held a banquet and honored Kermit this month with a special award for his dedication and contributions to recreate aviation history in such an outstanding way.

“I’m awed,” said Will Michaels, co-chair of the Tony Jannus Distinguished Aviation Society, “Kermit and Fantasy of Flight, they are doing a tremendous public service to the Tampa Bay area,” Michaels said. “He’s helping to put Tampa Bay on the map as the avant garde of commercial aviation.”

The commemorative flight is set to take place on January 1, 2014 – almost exactly 100 years to the minute of the original flight. At this point Weeks and his team are confident that they will be able to take off from St. Petersburg, weather being the only true determining factor.

UPDATE:  Kermit and his team were not able to make the January 1st deadline due to some safety risks. We’ll keep you posted on the flight details.