In my last year of grade school, my family lived in a neighborhood with an architectural oddity – an enamel-coated steel tile house. One of the last remaining bastions of an experiment in pre-fabricated housing, it was a Lustron.

Lustron homes were a bizarre development – one built with large steel tiles, coated with enameled porcelain in dove gray, desert tan, surf blue, maize yellow, and some Lustron historians and hobbyists claim, rare shades of canary pink or green. All of these colors were in keeping with post-war fashion. Several models offered comfortable floor plans with a refreshing open design. The homes featured allergy-friendly radiant heat, a combination clothes washer/dishwasher, and airtight plastic sealing between panels to keep the elements out. They were safe, modern, and ideal for the post-war era.

The perfect home for post-WW2 America, Lustrons were a sure hit. Built to be indestructible, historians believe between 2,498 and 2,680 of these maintenance-free, porcelain-clad stainless steel homes were built before 1953. They were even fire, rodent, and lightning proof. All steel walls made games with magnets fun and unending, hanging pictures a breeze, and cleaning even easier. A little window cleaner and your walls were shiny as new. Built-in cabinets saved coveted floor space and made storage a breeze, too.

Lustron homes could be built within two weeks, as long as you had a place to put one. They were low cost, running between $7,000-12,000 each. In short, they seemed like the perfect answer to America’s housing crisis. And then they weren’t. The company’s demise came despite orders for more up to 45,000 Lustron Homes and $37.5-50 million in federal subsidies and loans. 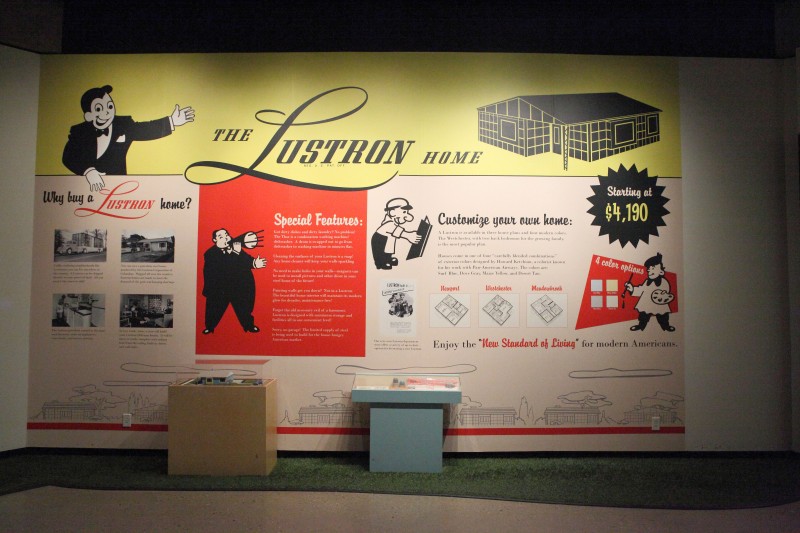 A museum exhibit on Lustron houses. Photo by Sam Howzit.

Built outside Columbus Ohio, the Lustron assembly line was 9 miles long and used more power than the rest of the city combined.  The factory was built at the city’s airport in a facility that once manufactured planes for WWII.

Carl Strandlund, a Swedish-born inventor who grew up in the US, invented these homes, along with rubber tractor tires and 150 patents for various farm implements. He worked for the Chicago Vitreous Enamel Product Company (CVE) before designing Lustron homes. CVE manufactured steel panels for Standard Oil fuel stations and White Castle restaurants, but the war brought changes. Wikipedia claims that Strandlund “was hired …  to transform the factory for defense production. Strandlund invented manufacturing techniques to build non-warping metal plates for tanks during World War II, created air conditioning systems for movie theaters, and invented a wallpaper-removing machine. The company rewarded him with a promotion to vice president and general manager in September 1943.”

During the war, CVE’s production was tightly controlled due to the government’s need for steel; the government suggested that it would instead be interested in seeing houses produced with the same steel system. At the end of WWII, 2 million GIs returned home and the nation was faced with the most acute housing shortage in its history…and as the boomer generation can attest to, housing needs were growing. Strandlund seized the opportunity and the Lustron Co. was born.

Strandlund built a prototype for his Lustron homes in 1946 in southwest suburban Hinsdale, IL. The first ten houses built by the company were in major cities, including New York City, Washington, Des Moines, and Milwaukee.  Demand was high. People lined up for blocks to see the Lustron houses, and orders poured in.

According to Lustron historian Tom Fetters, “There was a man in Cedar Rapids who went to the model house. He saw it on a Sunday, he ordered one on Sunday – this was very unusual – he already owned property, they put the slab in on Tuesday. The house was up by Saturday. He was in it on Sunday. So, from bare ground to living in the house – in one week.” It’s easy to see why Lustron homes appeared to really be what their one of their mottos claimed: “The House America’s Been Waiting For.”

Lustron houses were delivered to 36 states, complete with more than 3,300 parts and something any homeowner could claim was unique, modern, and exciting; a plaque in the utility room that proudly boasted “Lustron Steel Home Made in Columbus, OH” with their very own Lustron’s serial number and model number. After following 207 pages of instructions, their roughly 13-ton steel home was ready to use. 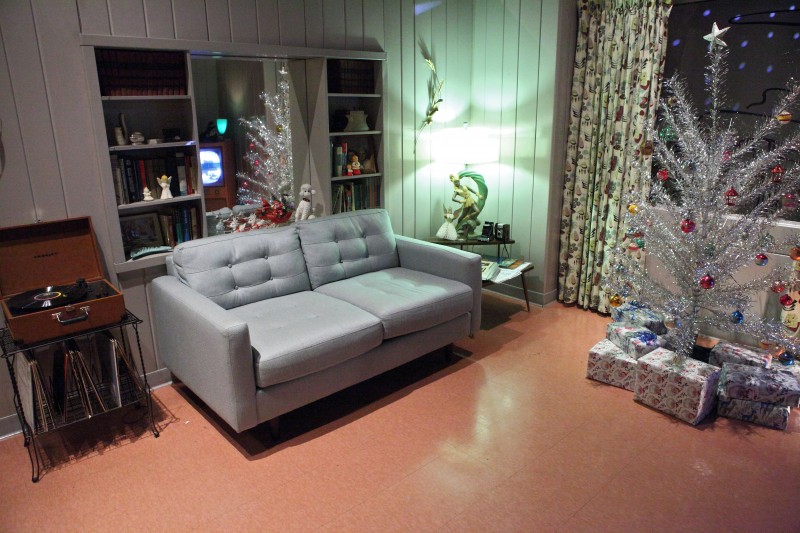 Interior of a Lustron home in a museum exhibit. Photo by Sam Howzit.

The End of Lustron

By 1949, the company had 234 dealers in 35 states. Park Forest, IL planned a development of 2,000 Lustron homes. None were built. The company had claimed they could manufacture enough parts for between 100 and 450 houses per day, but deliveries were delayed and production was well behind schedule.  The facility was only capable of manufacturing 26 Lustron houses each day.

Paul Lukas, reporting for CNN Money and Fortune Small Business in 2001 wrote “Although demand was high, production was trickier than Strandlund had anticipated. Instead of turning out 100 Lustrons a day–or even the 50 a day needed to break even–he had a daily high of 26. As buyers faced increasing delays, Strandlund’s Washington advocates grew antsy.” Demand far outpaced supply, and that wasn’t the only problem. Production costs were higher than the company had projected. Labor unions were upset, since the homes could be built quickly and without their help. Zoning boards weren’t thrilled over some of the house’s features.

Lustron, despite popularity and plenty of orders, was in big trouble. In front of a congressional committee, Strandlund admitted his failure. He told the committee that Lustron was losing millions of dollars a month. Government funding was cut. The company became the laughing stock of the press and investors were warned to stay far, far away. The U.S. Senate banking subcommittee investigation revealed corruption within the company, as well.

The government body that had made the loans and provided subsidies, Reconstruction Finance Corporation, foreclosed on Lustron. As for Strandlund, great ideas don’t make a fortune if you can’t make the numbers work – he filed for bankruptcy at the same time as Lustron went bust.

By 1952, the factory that had once made Lustron homes was making jet airplanes for the Korean War. Only 2,500 of more than 45,000 ordered homes were ever built. In 1974, Carl Strandlund died in Minneapolis at 75 years of age. He never got over the Lustron homes fiasco, and with good reason.

If Lustron had stayed in production for just a few more years and had managed to meet delivery deadlines, Lustron homes could have revolutionized American architecture. The public loved them, they were much cheaper to build and buy than most homes, and the majority that weren’t demolished to make room for new development are still in good condition. They’ve become a hobby for the curious, a passion for architectural historians, and some might say – a source of inspiration for tiny home dwellers and people who are interested in affordable, comfortable housing. 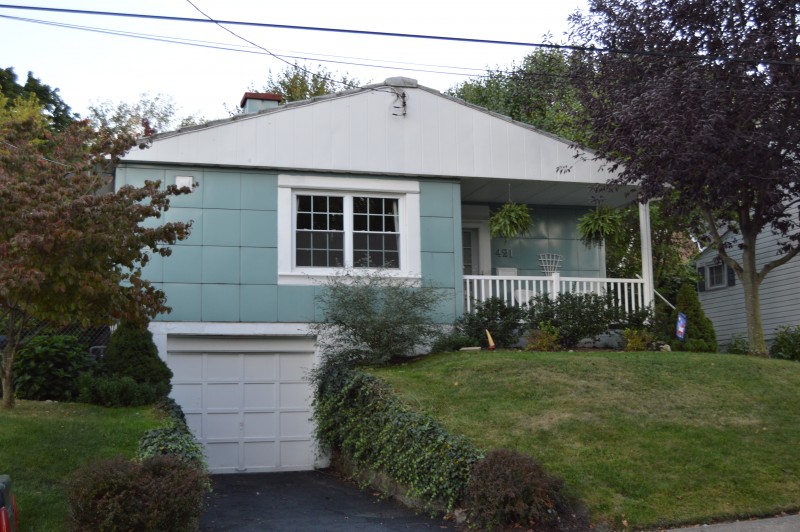 Lustron houses weren’t typically built on top of garages, but this California, PA Lustron is an obvious exception.

Are Any Lustron Homes Still Standing?

Lombard, IL has the highest concentration of Lustrons ever built, but the design’s popularity is clear in the number of Lustron homes that show up in several areas. Sixty were built at the Marine Corps base in Quantico, VA in 1948, following the construction of the Pentagon. Unfortunately, they were demolished recently. The DC area was a hot spot for Lustrons, however. 11 more were built in Arlington County, VA in 1949, where five remain standing.

All of the Arlington, VA Lustrons were built in 1949 and are Lustron’s most popular of its eight home designs – the Westchester Deluxe 02 model – which offered a two-bedroom layout with a single bathroom and 1,093 square feet of living space. One of the Arlington Lustrons that was taken down is in the county’s possession where, “for now it is boxed, relegated once more to “kit” status, awaiting rebirth, once again the ‘house of tomorrow.’”

Many Lustron houses around the country still boast the original Gasomatic furnace units as their heat source, but the unique combination clothes and dishwasher is a rare find in the remaining Lustron houses.

Fetters, and Lustron hobbyists like him, are passionate about Lustron homes. As of 2004, Fetters had visited roughly 1,800 of the original 2,500 Lustron homes, and planned to visit more. He also authored a book on these homes. In 2008, a regional Emmy winning documentary on Lustron homes was filmed, and numerous television specials have aired on this unique post-WWII housing trend.

If you’re fascinated by the Lustron Home, check out the Ohio History Connection. The site offers plenty of info for anyone who’s into solid steel housing.

I'm a fan of honest words, clarity, and impact. A writer, editor, and translator, I spend my days guzzling coffee like a champ, living the expat dream, and being mom to world's sweetest preschooler. I’m co-owner and copywriting head at Rusmexus Writers, a history buff, and have a background in international relations.
0 POST COMMENT
NEXT ARTICLE
Alice? Alice. Who the heck was Alice Paul?
April 7, 2016 - 5:52 pm
PREVIOUS ARTICLE
Vancouver, Canada: Ancient settlement with a modern vibe
March 27, 2016 - 11:47 pm