/ Attractions / Exploring the depths of the Mel Fisher Museum in Key West, FL

In season one, we got a look at one the most visited museums in the Florida Keys, the Mel Fisher Maritime Museum.  It’s truly a great way to learn about the life of one of the world’s greatest treasure hunters, plus see some of the amazing treasures Mel and his team were able to recover from the waters just off of the Florida Keys.

Mel is most famous for his quest to find  the 1622 wreck of the  Spanish galleon, Nuestra Señora de Atocha. Mel did eventually find the wreck, and recovered an estimated $450,000,000 worth of the treasure from the sea floor including Spanish “pieces of eight,” gold coins, silver artifacts and the finest Colombian emeralds the world has ever seen, originating from the Muzo mines.  The site of the wreck is called “the Spanish Bank” and is still worked on today.  Despite the huge find, it is not even half the entire galleon’s haul.  The stern castle of the ship is still missing.

Mel and his team also found the Atocha’s sister ship the Santa Margarita, lost that same year, as well as, a slave ship called the Henrietta Marie. Mel paid a great price for his treasures though.  Tragically, both his son, daughter in-law, and another diver, Rick Gage were killed in the search for the Atocha when their boat capsized in 1975.

At the museum, you’ll find a plethora of wrecking history. The Keys were ripe for shipwrecks due to the shallow waters, reefs, and unpredictable hurricanes.

In 2010, in a brazen smash and grab, a 74oz gold ingot from the Santa Margarita, that was a centerpiece exhibit at the museum was stolen.  Patrons were encouraged to pick up and hold the gold bar, which was encased in bullet proof glass. Below is a video of the suspects.

Mel Fisher with his findings

The stolen gold ingot from the Santa Margarita

Exterior of the museum

Slave shackles from the Henrietta Marie 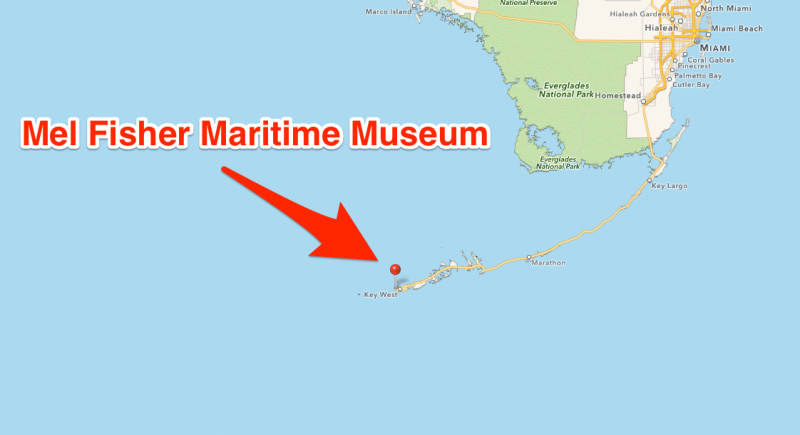