/ Attractions / (Not So) Hidden Gems of New Haven, Connecticut

New Haven, Connecticut is a modest, low-key city with a small town feel and many interesting landmarks. Home to tasty pizza, delightful ice cream and haunted dolls, this quirky town shows off its character in a most unique way.
Brandon Speakman on June 12, 2017 - 12:51 pm in Attractions, Places to visit

New England is always such a treat to explore. If you were born and raised in California, as I was, you’ll find that the northeast is a completely different world with lots of scenic cities to visit that are only a bus ride away. Most of these cities showcase their own distinctive features in ways you can’t even imagine. In my opinion, this is what defines the east coast, as it’s hard to compare this kind of originality to any other part of the United States.

Things to do in New Haven, Connecticut

New Haven, Connecticut is a great place to visit, especially if you’re looking to have a relaxing vacation in a town that is slower-paced than what you are used to. Whether it’s just for the night or a few days, New Haven makes for a fun adventure for those visiting New England. 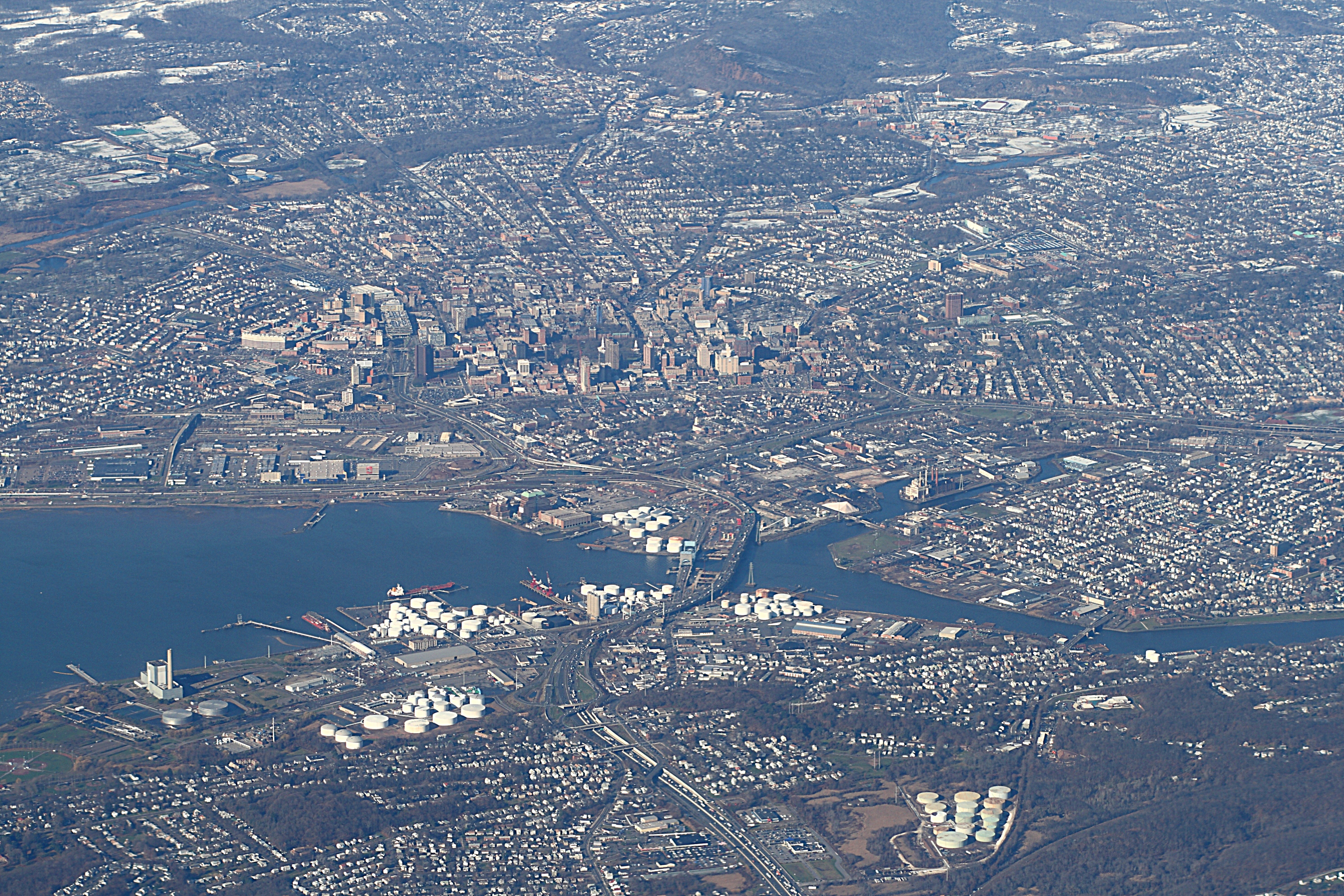 New Haven is the second largest city in Connecticut.  Founded in 1638 by English Puritans, New Haven is home to Yale University. New Haven is rich with American Revolutionary history. In fact, Roger Sherman, a signer of the Declaration of Independence, was once the mayor of New Haven.

Located in the neighborhood of Wooster Square near Downtown New Haven is one of the oldest and most well known pizzerias in the United States, The Original Frank Pepe Pizzeria Napoletana. Ranked as the 2nd best restaurant in New Haven by Trip Advisor, this sit down pizzeria almost always has a line out the door, which is mixed with both locals and visitors that just can’t get enough of Frank Pepe’s pizza. 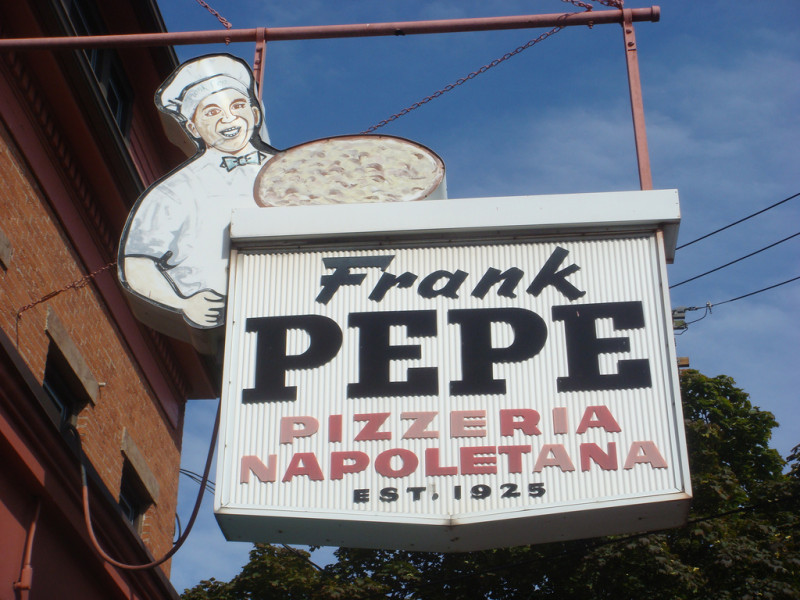 The idea for this exceptional pizzeria started with Frank Pepe himself. In 1925 Pepe came to the understanding that a coal fire would be the only way to give his tomato pies that crisp, charred, chewy crust that the restaurant is now famous for. His famous thin crust pizza started a tradition that will live on in Connecticut forever; New Haven-style thin crust pizza. Even after 90 years, Frank Pepe’s pies are a staple in New Haven and can hardly be compared to any other type of pizza in the U.S. 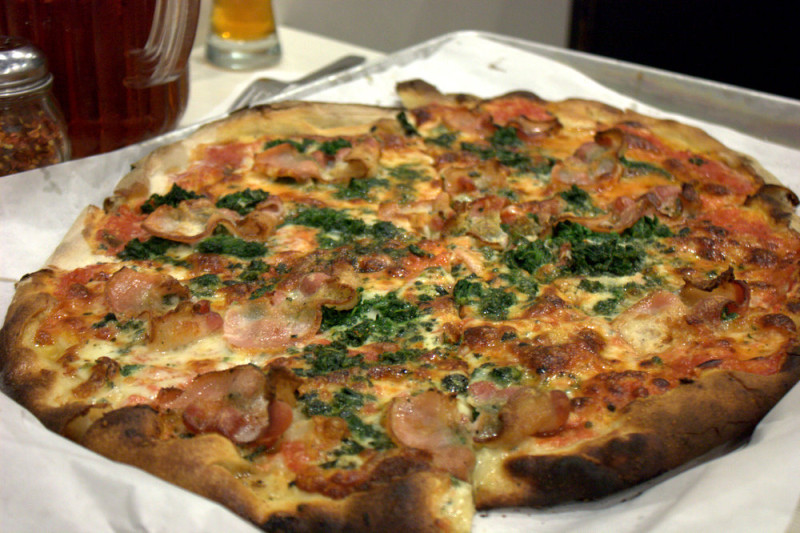 Bacon and Spinach Pie at Frank Pepe’s Photo via Wikipedia

Frank and his wife Filomena started their business off with 2 simple types of pizza. The Original Tomato pie, which was topped with grated cheese, tomatoes, garlic, oregano and olive oil and a pizza with just anchovy as the alternative. The Original Tomato pie is still available to order at Frank Pepe’s and is one of their most popular pizzas. 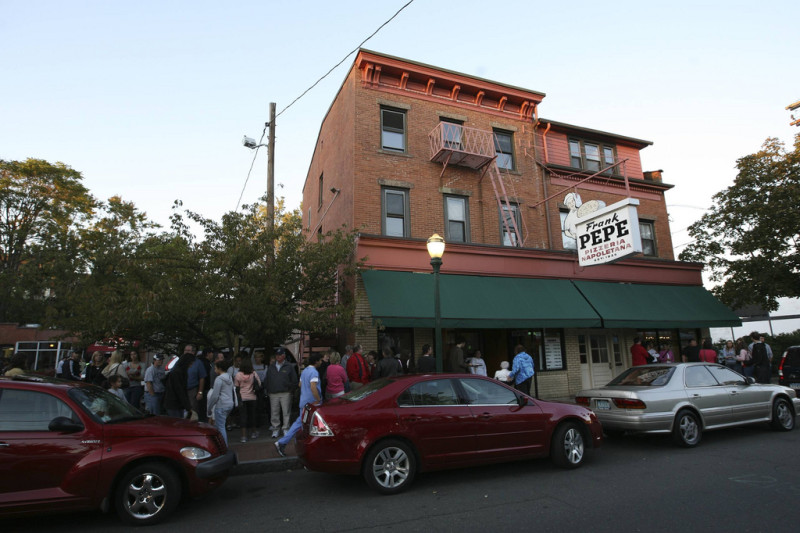 Finding some excellent dessert in Downtown New Haven isn’t the most difficult task, but if you want some quality ice cream that is described as being made with “all natural and fresh ingredients”, Ashleys Ice Cream is the place to go. Named after Ashley Whippet, the well-known frisbee catching job, Ashleys Ice Cream is decked out with multiple frisbees that management has collected since the opening of this scrumptious ice cream parlor.

Ashleys Ice Cream was founded on College Street in New Haven, Connecticut in 1979, right across from Yale University and has since become a popular hangout for the future Alumni of Yale. Due to the close proximity to campus, Ashleys stellar reputation skyrocketed amongst students and it wasn’t long until a second location opened up on the other side of campus on York Street.

Ashleys owes most of its popularity to the interesting flavors that are served up daily including Nutella Chip, Bourbon Brown Sugar, and GrapeNut, which is sweet cream ice cream and grape nut cereal. Okay, so maybe try some of the flavors before you commit to a full cone. Your visit to Ashleys will be a memorable and tasty experience.

If you are familiar with the films The Conjuring and Annabelle, you may be familiar with the Warren’s Occult Museum. The museum is located 25 miles east of New Haven and houses many of the items that have been involved in cases regarding possession, voodoo and other satanic rituals. Lorraine and her late husband Ed Warren are real life ghost hunters that have been involved in many haunting cases. Some of the cases have even been turned into blockbuster films, including The Amityville Horror, A Haunting in Connecticut and Annabelle. 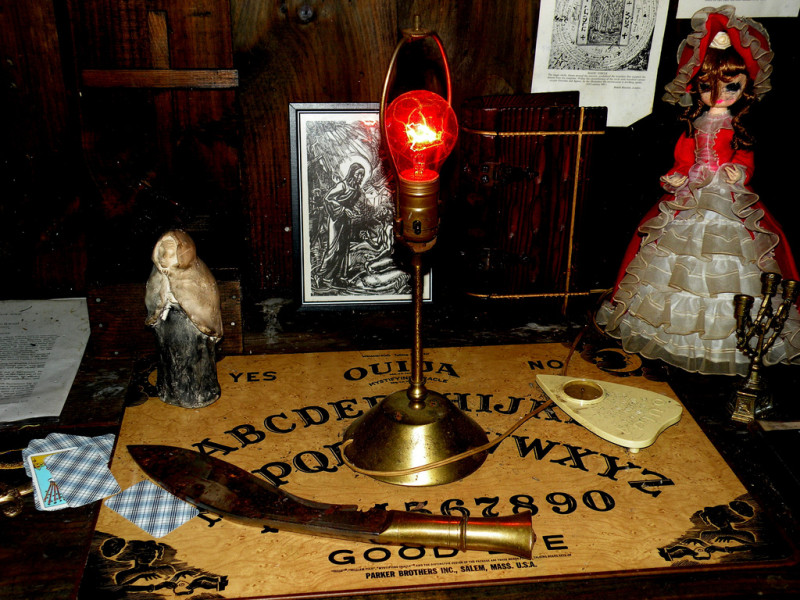 While the “real” Annabelle doll is just an innocent looking Raggedy Ann doll, the story goes that this doll isn’t so pure after all and has been the cause of different tragic events. The late Ed Warren used to tell the story of a young man that came to the Occult Museum and mocked the Annabelle doll. Ed asked the man to stop taunting the doll and eventually asked him to leave the premises of the museum. Later that day, the man was riding on his motorcycle with his girlfriend and hit a slippery spot, which caused the man to loose control of his bike. That accident led to the young mans death and kept his girlfriend in the hospital for a year. To this day Lorraine Warren believes that man’s death was caused by the spirit of Annabelle Higgins.

The Warrens Occult Museum is currently closed, due to zoning regulations. Every so often events sponsored by The New England Society of Paranormal Research are held in Monroe, including an event called “An Evening with Annabelle.” “An Evening with Annabelle” is a special occasion where those attending get to see the “real” Annabelle doll in person. The event includes an all you can eat buffet dinner and different videos that were taken by Ed and Lorraine Warren during the time they were active ghost hunters. Attendees get to hear stories of the “real” Annabelle doll and can take a picture with the doll. Annabelle is housed in a glass box that reads “WARNING! POSITIVELY DO NOT OPEN!” 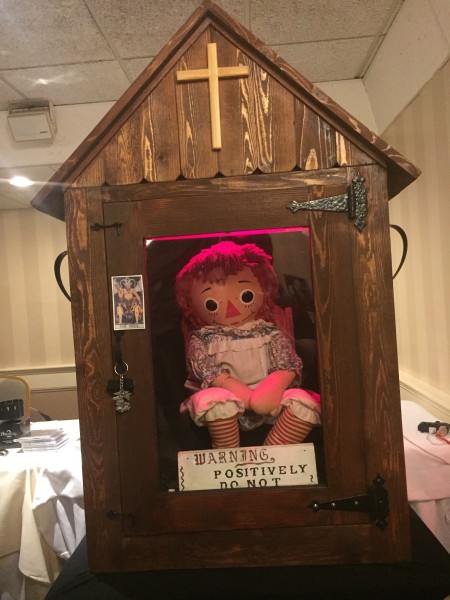 The events have more of a fun atmosphere, rather than a creepy one. The New England Society of Paranormal Research provides different haunted artifacts at each event. The artifacts aren’t publicly announced and add a special surprise to those that attend “An Evening with Annabelle.” These events are definitely worth a visit for the paranormal, supernatural lover.

For more information things to do in New Haven, Connecticut check out the official tourism board website.