New York City is one of the most exciting places in the world and is home to some of the most unique restaurants in the world. Many New York restaurants have become famous for their appearance in certain films and television shows. Many of these eateries are open to the public and attract many visitors each day that want to take in the history that each restaurant has to offer.
Brandon Speakman on July 13, 2017 - 9:16 pm in Attractions, Historical, Places to visit

New York City is one of the most exciting places in the world. One of the aspects that makes it so exciting is that it is often the setting of numerous television shows and movies. Many of the TV shows and movies that have been filmed in New York City have put certain locations on the map from just one scene, including an array of restaurants. A plus for tourists and television/movie buffs is that many of these restaurants are open to the public, so you can relive your favorite movie scene or television episode during your next trip to The Big Apple. 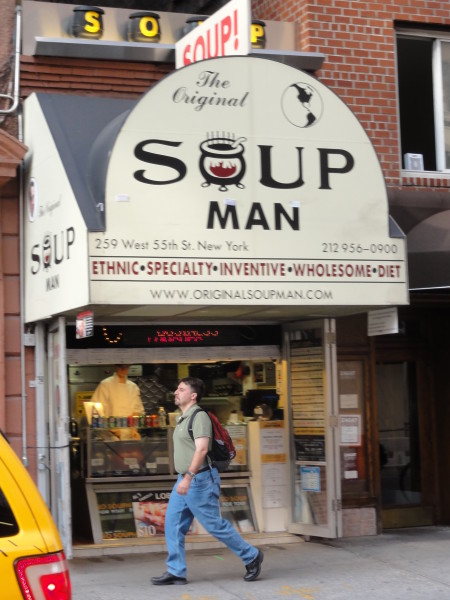 With 2 locations in Manhattan and one in Staten Island, The Original Soup Man isn’t your typical soup stand. The Original Soup Man became one of the most well known restaurants in New York City after Seinfeld writer Spike Feresten told Jerry Seinfeld and Larry David about soup vendor Al Yaganeh, who gained the nickname “The Soup Nazi” from the way he treated his customers. This set off a creative spark in Jerry Seinfeld and Larry David and led them to write one of the most well known television episodes in history, “The Soup Nazi.”

The Soup Nazi’s name in Seinfeld was Yev Kassem and was portrayed as a tyrant who made his customers follow a strict set of rules before being allowed to enjoy a bowl of one of his highly desired soups.

Weeks after “The Soup Nazi” aired, Jerry Seinfeld, Spike Feresten and several other Seinfeld writers went to The Original Soup Man, which was at that time called Soup Kitchen International, only to be thrown out by Yaganeh. Yaganeh cursed out Jerry Seinfeld, yelled “No soup for you!” and forced Seinfeld’s party out of the restaurant.

While Yaganeh was clearly offended by the character that was based off of him, he has definitely used “The Soup Nazi” as a way to promote his restaurant, including having the phrase “Soup for you!” and a blurb about “Seinfeld” on the back of his premade soup packages that are sold in grocery stores around the country.

While there may have been a line out the door when The Original Soup Man first opened, you’ll be pleased to hear that you don’t have to wait more than 5 minutes when ordering a bowl of one of Yaganeh’s outstanding soups. Yaganeh offers a wide variety of soups including, Crab & Corn Chowder, Jambalaya and the famous Lobster Bisque. Unfortunately you won’t find any mulligatawny or turkey chili, but the soups that are sold are all hearty and stunning in their own way. To quote Jerry Seinfeld from “The Soup Nazi,” “You can’t eat this soup standing up, your knees buckle.” 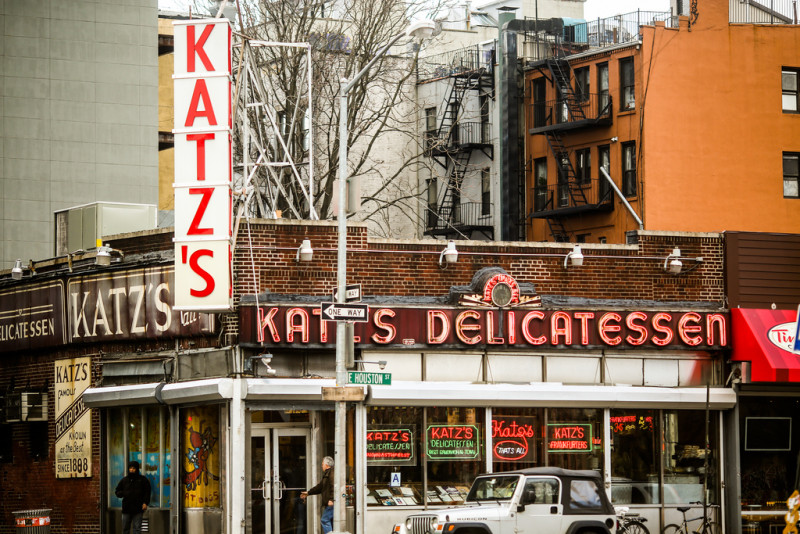 When customers enter Katz’s Deli they are given a ticket that acts as a bill, totaling the cost of all items purchased at the deli counter. If that ticket is lost, an additional $50 is added to the bill as an incentive for patrons to not lose their ticket and to prevent theft.

Katz’s Delicatessen has been featured in many different television shows and films including The Jim Gaffigan Show, Impractical Jokers and of course, When Harry Met Sally…. There is even a sign that points to the table that Billy Crystal and Meg Ryan sat at during filming. 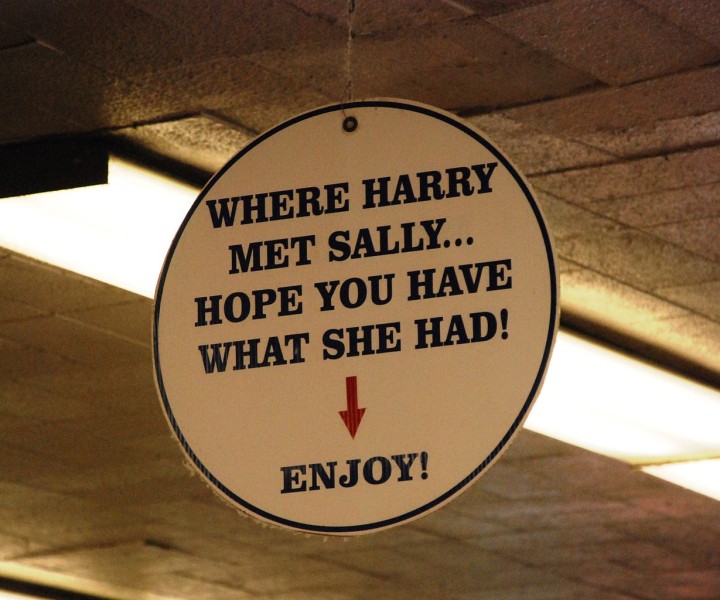 Katz’s Delicatessen has attracted hundreds of tourists each day, so that they can sit at the spot where Billy Crystal and Meg Ryan sat at during filming and have what she had. 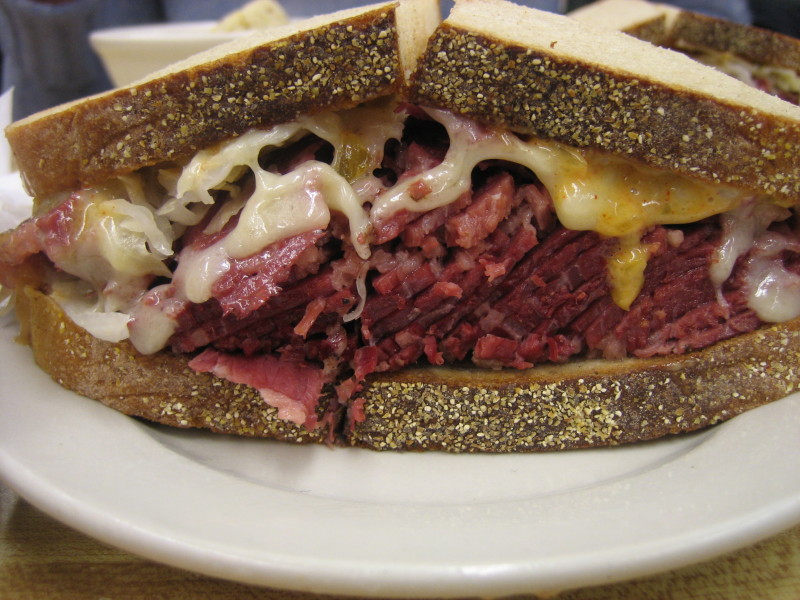 The Pastrami Sandwich at Katz’s Delicatessen Photo via Wikimedia Commons

Photo still of Meg Ryan and Billy Crystal during the filming of “When Harry Met Sally…” via Peter K. Levy-Flickr

Mr. Popper’s Penguins-Tavern on the Green 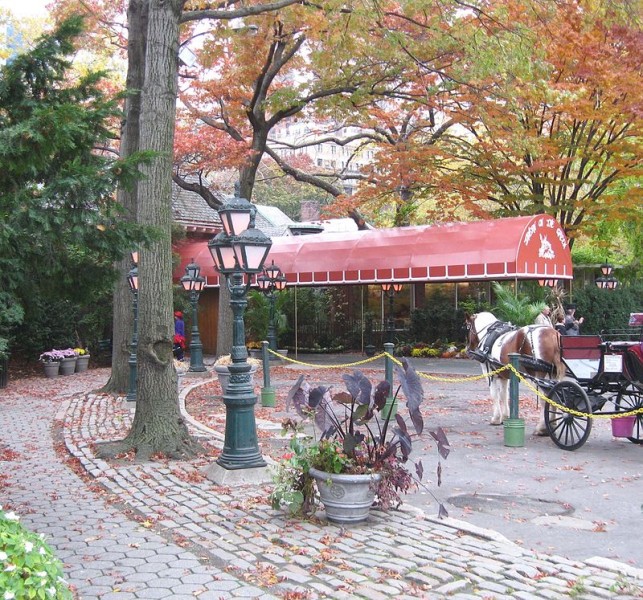 Tavern on the Green Entrance Photo via Wikipedia

Located in the middle of Central Park sits one of the most unique restaurants in all of New York City, Tavern on the Green. This iconic restaurant was once a sheepfold in the 1800’s to house the sheep that would gaze in Central Park’s Sheep Meadow. While Tavern on the Green has gone through many different owners over the years, the location, views and décor of the restaurant is what keeps actors, public figures, New York City residents and tourists coming back year after year.

On December 31, 2009, Tavern on the Green had its last seating before closing its doors and filing for bankruptcy. Tavern on the Green reopened on October 15, 2010, but only as a museum. It wasn’t until April 24, 2014 that the restaurant was opened again by its new owners. 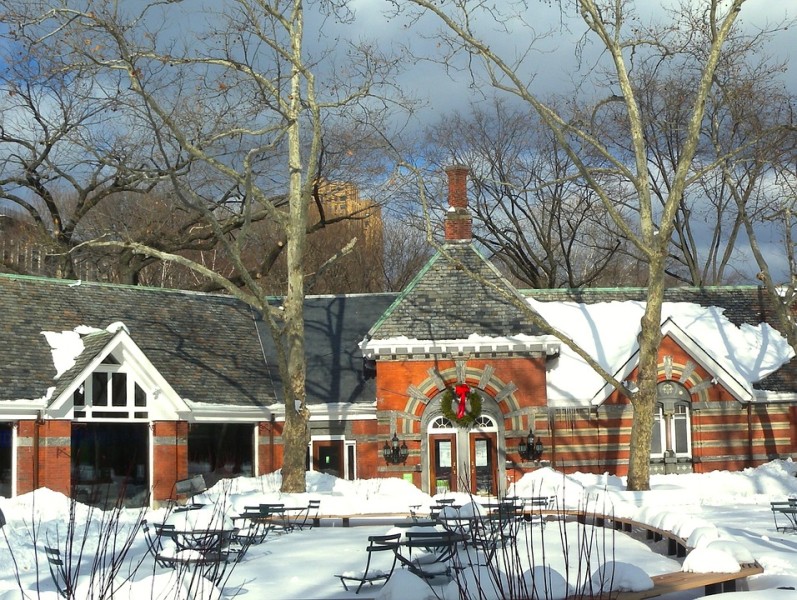 Tavern on the Green Photo via Pixabay

Next time you find yourself in New York City check out these popular eateries and take in the history that each restaurant has to offer, as well as a cool photo for your Instagram feed.