Attention all beer lovers: Oktoberfest in Munich is probably the biggest beer festival you could ever attend in the world! In a word-Awesome.  My husband and I decided to tick this off of our bucket list and take a 3 day trip to explore some of the sights in Munich, Germany. 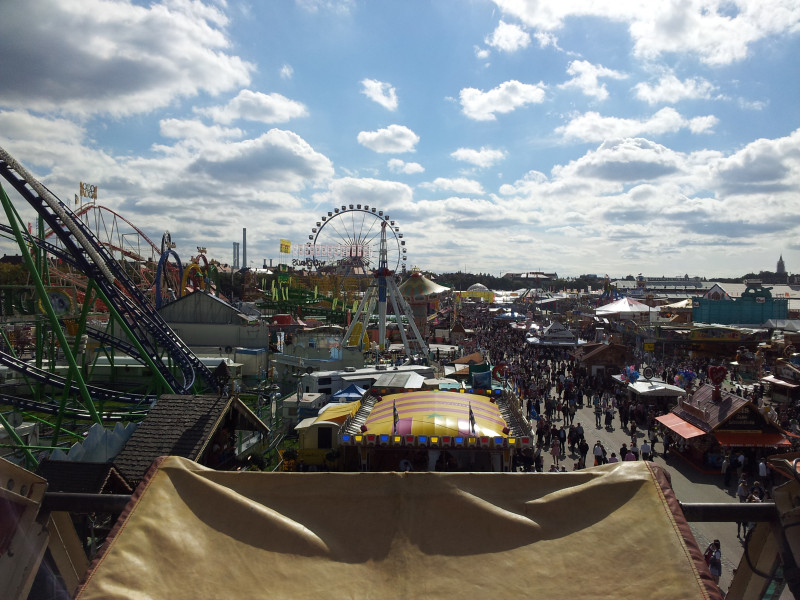 This is the first time we flew Lufthansa and it was a great in-flight experience. The crew was so friendly and accommodating, not to mention the free beer and wine that was offered to us in coach. We arrived in Munich and headed to the train to get to our hotel. I did some research on ticket prices ahead of time and found that we should purchase a 3 day inner zone ticket for 25,90 EUR which is good on all intercity transportation. I am a planner by nature, but didn’t plan that the ticketing machines are all in German. After asking someone for help, we were patiently guided through the transaction process, and boarded our first train for a 35 minute ride into the city.

We booked the Munich Hilton Park which was near the English Gardens. The hotel is in close proximity to all modes of transportation as well as walking distance to the Marienplatz – Munich’s most famous square. After a few hours of sleeping to get over the jetlag, this was our first destination. The sense you get when you arrive to this square is it’s the place to be. The air is full of fresh food aromas from bustling restaurants catering to the locals and curious tourists. Everyone is wearing the famous Lederhosen, and there is an abundance of street vendors and artists filling the main square. In a split second, a group of locals started the chants and singing German songs as they lifted and swayed their beer steins to the beat.

Then you see it. 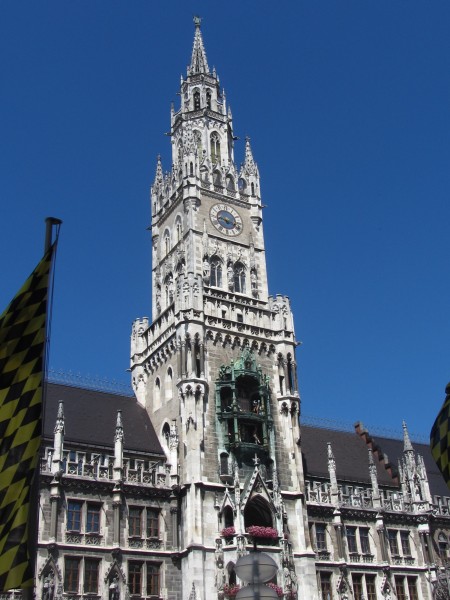 The crowd is staring at the New Town Hall that houses the Glockenspiel. We stared along with them. All of a sudden, the chimes started ringing and the figures appeared to put on the show. It was truly an amazing sight. After the chimes, it was time to eat, and found a restaurant called The Augustiner Restaurant serving many Bavarian delicacies. The menu was in German, so our kind waitress muddled through to translate using her broken English and helped us order our meal which was a variety of delicious local meats, vegetables and breads. We finally said “beer” and she brought 2 huge beer steins full of the best beer we have ever tasted. It was a good night.

We started out with directions from the front desk and made it to the Oktoberfest grounds around 10:00am. I was told from locals that the place fills up quickly so it was nice to enjoy looking around before the large crowds appeared. Looking around the grounds, it is something you can’t imagine unless you see it with your own eyes.  The festival grounds are filled with colorful beer tents, souvenirs, games and rides. The beer tents are amazing in themselves. Each one is bigger than life with animatronics, smoke, flags, and all the pomp and circumstance of a royal parade. Getting into them is another task. Reservations are made a year in advance, and mostly by invitation only. We were happy to hear the beer chants from outside while we enjoyed out pretzel and over-sized hotdog with the rest of the tourists.

Beer halls that serve the general public are available without reservations and you can drink throughout the grounds. I recommend Lowenbrau and getting there early! We lucked out in the evening as a friend was able to get us into the Lowenbrau after party. I have never seen so many tables and trays of beer in my life. The music played loud and into the wee hours of the night. It was a great experience.

Off to Castle Neuschwanstein 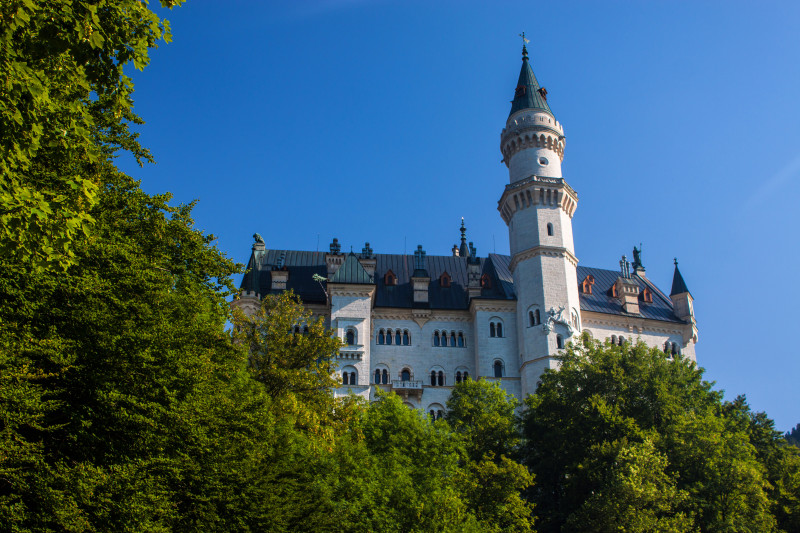 The Neuschwanstein Castle in southwest Bavaria was something that was on our list for the last day. We rented a car by the train station for $70 US. We had a map and GPS to navigate the 2 hour drive as well as a thrilling 20 minutes spent on the Autobahn. The castle has been described as the inspiration for Walt Disney’s Cinderella Castle in the Magic Kingdom and it didn’t disappoint. Arriving to the ticket counter it’s a 12 EUR entrance fee into the castle. We took a bus ride up the winding road which was another 6 EUR round trip per person. Once the bus stops you have to walk a path to get to the main gate- so wear comfortable shoes. The views from the castle looking over the German countryside are breathtaking. Once inside, the castle has many beautiful rooms that you will tour with a guide. No pictures are allowed in many areas, but there are some spots that have been designated picture friendly. We took 2 hours to see the castle but we are in Germany, and headed out to end our day with more local food and beer.

In Germany, people are friendly and willing to help you get around. It is a beautiful country and Munich as well as Oktoberfest needs to be put on any travel lovers bucket list as a definite must do.

To read more from Elaine, check out her blog at thedesignatedtraveler.com 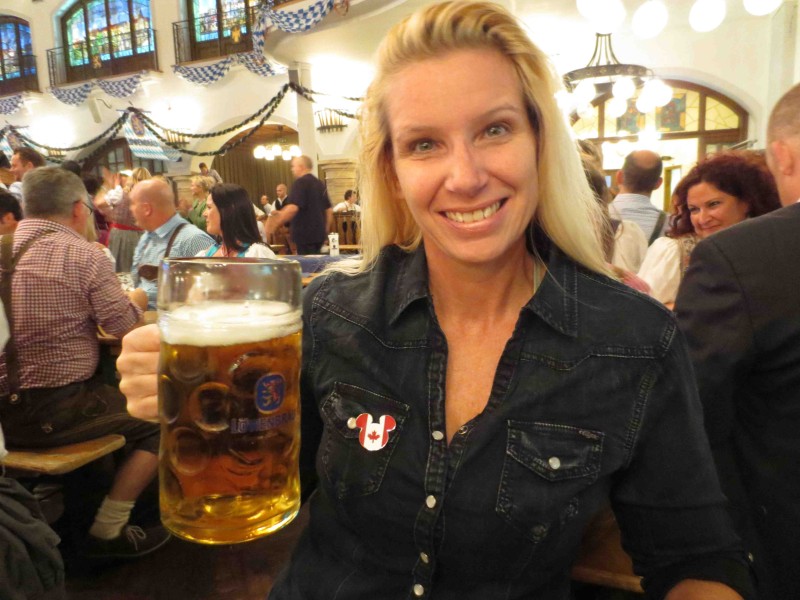 Me and my beer stein 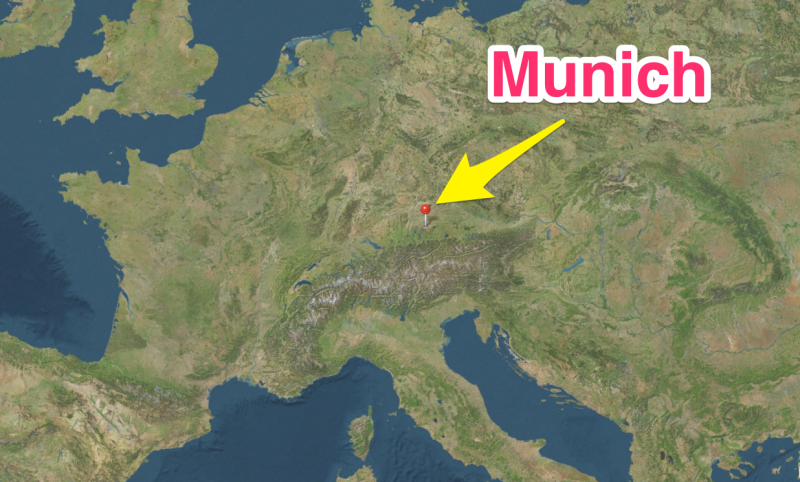 For more information on a trip to Munich visit www.muenchen.de