Skopje, Macedonia is a city whose name we usually hear tied to international news. Located in the heart of the Balkans, the conflicts and turmoil this city has suffered don’t do its beauty, spirit, and history justice. It’s time to go beyond the headlines and look at what makes this striking metropolis tick.

Where to Visit in Skopje, Macedonia

There’s no shortage of history and adventure to explore in Skopje, from its settlement more than 2500 years ago to the 527-year-long Ottoman reign and the more recent exploits of Zorba the Greek or the revolutionary efforts of Goce Delchev, it’s an incredible place.

Skopje’s not a big place – with an estimated 700,000 inhabitants, it’s the biggest city in Macedonia (and home to roughly one third of the nation’s population, it’s still a small city by international standards. That’s a good thing. In addition to being small, it’s walkable, designed for the pedestrian, and its streets are lined with linden and Japanese cherry trees, monuments, and sculptures.

To get a decent understanding of Skopje, you have to see the natural wonders that surround it, and the mix of architectural styles and historical periods that it holds. 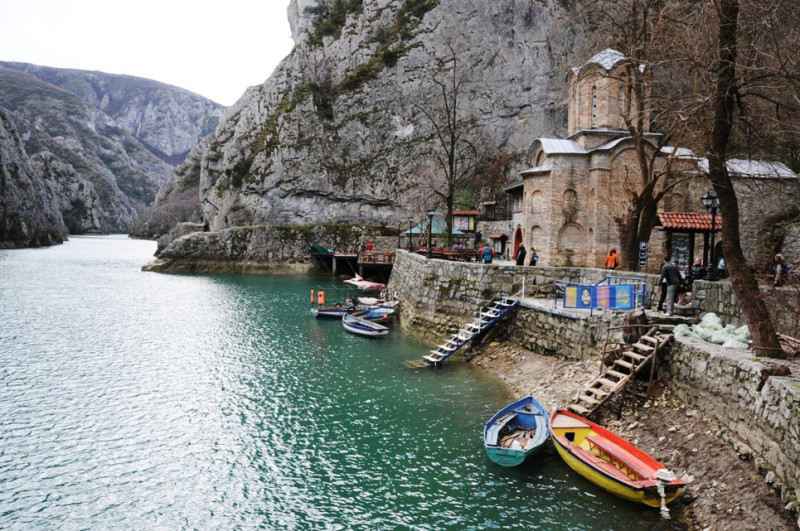 Formed by a dam on the Treska River, Matka Lake and the surrounding canyon is one of the most popular day trips for visitors to and locals from Skopje. It’s the first man-made lake in Macedonia, and we’re happy it exists. Less than an hour outside the city striking rock walls rise out of pristine mountain water. Caves and karstic formations dot the surrounding landscape, and several unique animal species live here. It’s a peaceful place, but there is plenty to see and do.

One of the caves in the canyon is Vrelo. It’s a fascinating stop for tourists, and was named one of the top 77 natural wonders of the world. The cave itself holds two lakes and extends both below and above the water. But Vrelo isn’t the only ancient and beautiful place to explore when you visit Matka. St. Andrew’s Monastery is another great stop. Built in 1389, it’s a stunning piece of artwork unto itself, Matka Monastery is nearly as old and equally stunning, and St. Nicholas Monastery dates at least to the 1600s, but is more known for the impressive views it offers of the canyon below.

For a relaxing adventure, try kayaking, fishing, or swimming on the river. Looking for an adventure on dry land? The hiking is incredible. 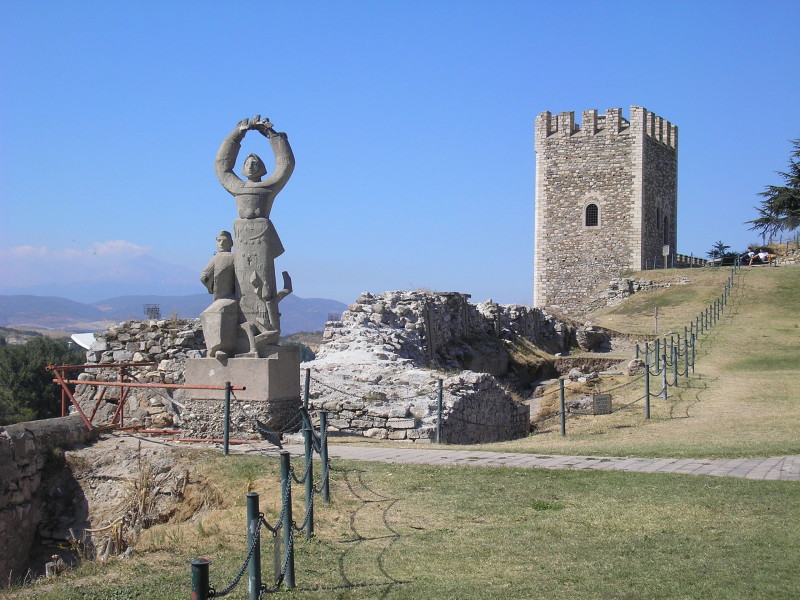 Situated above the modern city of Skopje, the Kale Fortress (a bit redundant, since “kale” is Turkish for fortress…) demonstrates something history will drum into your head in time. Once a good fort, always a good fort. First inhabited by prehistoric peoples, Skopje’s impressive stone fortress was first used as a fort under the ancient Romans. They had the brilliant idea to create a reinforced structure after an earthquake destroyed most of the city of “Skupi” in 518. Then came the Ottoman empire. They remodeled, reinforced, and expanded the fort in the 10th and 11th centuries.

And then, the massive earthquake of 1963 struck Kale, crumbling many of the walls, and leaving the site a bigger ruin than it already was. Although occasionally closed for repairs and renovations, the fortress is a welcoming place and guides are on hand to explain its history – good thing, because it’s a fascinating place, although there are no museums on site.

If you’re a camera junkie, make sure to check out the views from Kale. There’s no better place to capture panorama shots of Skopje (except, perhaps, the Millennium Cross).

Speaking of crosses…Sveti Spas is the oldest church in Skopje. It predates Ottoman rule, and rumor has it that at one point it was shrunk in order to stay in line with an Ottoman rule that dictated no church could be bigger than a mosque.

Outside, it’s a modest and quaint setting that you’d love to grab a bite of baklava by and just sit and enjoy the view. It’s topped with a wooden belltower, and a well-maintained garden. Inside, you’ll find the church is a bit more – revolutionary – than most. Literally. This house of worship holds one of Orthodoxy’s most stunning and intricate icons, carved in the 1600s and restored in the 1800s. It’s also the final resting place of national hero Goce Delchev, and is home to a small museum of Macedonian revolutionary history. You decide – military museum or religious house of worship. Either way, it’s worth the visit.

Kursumli An, Daut Pasha Hammam, and the Old Bazaar 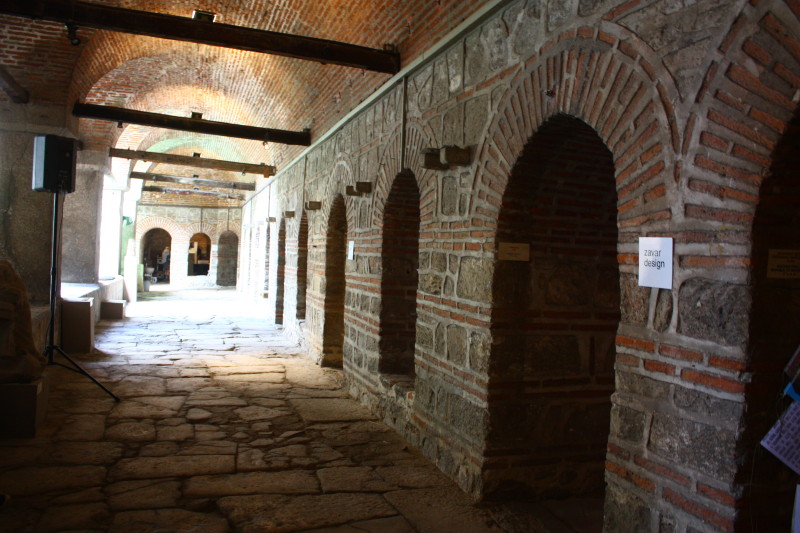 Kursumli An in Skopje is a fascinating ruin, but not an abandoned one… Photo by Darko Nikolovski.

From hosting weary travelers to bathing harems and selling wares, the Muslim architecture of Skopje, Macedonia has played a colorful role in the city’s history. Kursumli An is one of the oldest Ottoman structures in the city, and was once topped by a large dome. Like the other ancient Ans in the city, it was designed to provide shelter and security to traveling merchants, traders, and visitors. As a result, few windows were included in the structure.

Today, the main courtyard is open to the air, and you can feel the history of traders, travelers, and explorers who passed through its walls when you stop for a visit. It’s rarely open, but when it is, watch for the exhibits of grave stones from the Museum of Macedonia – although they may seem a tad spooky, they offer a unique window into the blend of cultures that once lived in this area.

Daut Pasha Hammam was once the bath house for a full harem. Today, it is a stunning architectural remnant of a bygone era. The ceiling is dotted with stars, and the building itself hosts the work of famous artists as a part of the National Gallery of Macedonia. From the outside, it’s a metal-roofed stone structure that looks humble, although impressive in size. Inside, the star-shaped skylights and art-bedecked walls will put your imagination in charge.

The Old Bazaar is the oldest Ottoman bazaar in the Balkans, and its streets are still lined with shops where old men sit drinking strong coffee and eating honey cakes as the day wears on. You’ll find a captivating mix of goods here, although little (if anything) is made onsite anymore. Some of the bazaar’s streets are covered, and the postcard-like setting of this area is a favorite tourist spot.

Macedonian Square, the Stone Bridge, and the Museum of the Macedonian Struggle 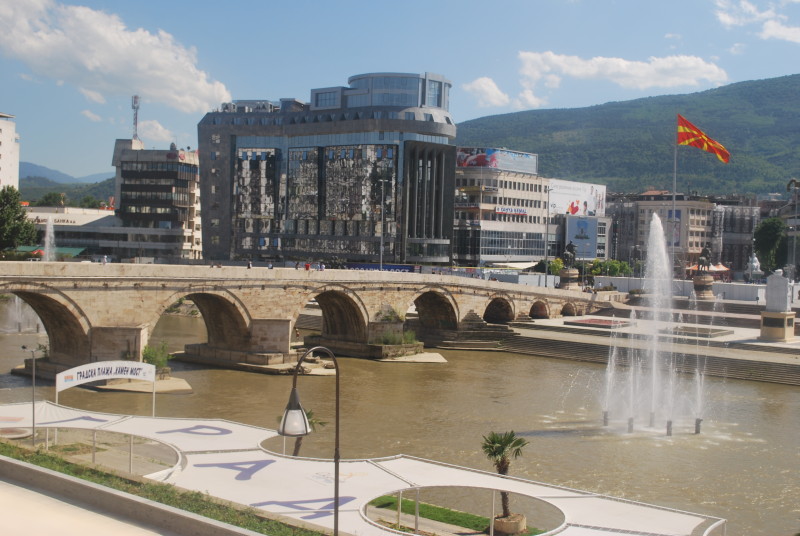 Kameni Most, or “The Stone Bridge” was once a bloody symbol, but today is a bridge between two worlds. Photo by Rašo.

Macedonian Square is a strange intersection of new and old, East and West, Christian and Muslim. The Stone Bridge, once the site of Ottoman executions, is now the bridge between two worlds. It connects new Skopje with the old town, and leads into the heart of the modern Macedonian Square, a center for activity, culture, and education. Just a few blocks away, the Old Railway Station is now home to the Skopje City Museum, and provides a permanent reminder of the January 26, 1963 earthquake that turned this city into a heap of stone rubble.

At 5:17 in the morning, the clock on the railway station’s wall stopped. More than 1,000 people died, and Skopje would never look the same. Much of the surrounding city owes its current appearance to an architecture contest held to help the city recover. Japanese architect Kenzo Tange’s whimsical, futuristic vision came to life here shortly after the quake, but was never fully implemented.

Closer to the Stone Bridge, and surrounding Macedonian Square, a mix of architectural styles is still visible. Recent projects here have stirred criticism regarding the government’s frivolous spending and kitschy taste, but one thing is certain – the square itself draws tourists and photographers in droves.

Across the Vardar River, there are some interesting pieces of architecture, including the Palace of the Youth Center Karposh and the Museum of the Macedonian Struggle. Providing a visual record of Macedonia’s history, its collections are unique and intriguing, and the grounds of the museum are also worth walking through.

Built in 2009, this unique structure is whimsical in its design. Paying homage to one of Skopje’s most famous natives, it commemorates the life of Gonxha Bojaxhiu – known to most of the world as the Nobel Prize Winning nun from the ghettos of Calcutta, Mother Theresa. It’s worth the stop, regardless of your religious leanings (or lack of).

Where to Eat in Skopje, Macedonia

Hungry? The traditional cuisine in Skopje, Macedonia is the perfect mix of East and West. If you’re up for a taste of the local cuisine, head over to Stara Kuka. Looking for something a little more…fresh? Check out Canyon Matka. Here’s why we think you’ll love them:

Built in 1836, this restaurant housed six generations of the Jovanovich family before it became a dining facility. It claims to be the oldest traditional house in Macedonia, and offers a small museum on the grounds for true history buffs. The restaurant’s modern kitchen includes a traditional wood stove, and Macedonian folk music can often be heard here, as well.

As for the food, try the Shopska salad and the Turli Tava or the traditional Pastrmajilija for a taste of old Macedonia. Don’t leave without trying dessert, though! Call me a chocoholic, but I’d opt for the hot chocolate cake. It may not be as traditional, but come on. It’s chocolate!

Do you like fresh food? Like trout that’s just been caught? There’s nothing better after a long day on the water than Canyon Matka’s trout. The Canyon Matka Hotel & Restaurant is a stunningly beautiful place to dine, with incredible views of Matka Canyon. But the trout…yum! If fish isn’t your thing, I hear the duck breast with cherry jam is good, and rumor has it that the filet mignon isn’t bad, either.

Word to the wise – check your bill. The waiters here have a bad rap for tip scrounging, and the service isn’t always the best. The food and the views are unbeatable, though.

Ever been to Skopje? Tell us all about your trip. Loved the article? Share it! If you haven’t been there yet, contact Explore Macedonia to plan your trip. 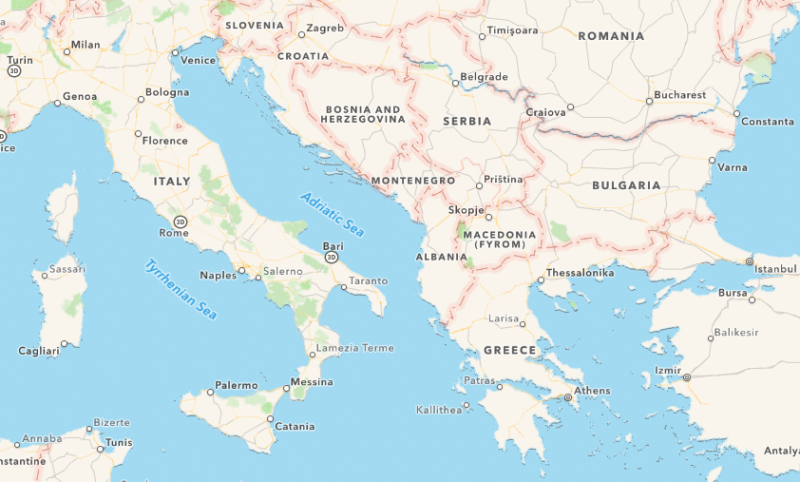 I'm a fan of honest words, clarity, and impact. A writer, editor, and translator, I spend my days guzzling coffee like a champ, living the expat dream, and being mom to world's sweetest preschooler. I’m co-owner and copywriting head at Rusmexus Writers, a history buff, and have a background in international relations.
2 POST COMMENT
NEXT ARTICLE
5 Titanic Coincidences that Prove Reality is Stranger than Fiction
May 27, 2015 - 3:15 pm
PREVIOUS ARTICLE
Vilnius, Lithuania - A Baltic Beauty
May 18, 2015 - 7:39 pm