If you're interested in history, art or the Cuban culture, travel to Cuba is as easy as booking a tour.
John DeMaio on February 28, 2014 - 6:53 pm in Historical, Places to visit

For as long as I can remember, the island of Cuba has had a mystique attached to it that is unlike any other country in the Caribbean.  The rich history of this small island that sits just ninety miles off the coast of Florida, evaporated into cloudy mystery shortly after the Cuban Revolution and the rise of Fidel Castro. Federal sanctions imposed by the United States Government after Castro gained control of Cuba, made travel and trade with this beautiful island next to impossible for American Tourists.

Previously, only religious, educational, and cultural groups could legally travel to Cuba with specific permission from the U.S. State Department.  Over the last few years, however, some of the restrictions have been relaxed – making travel to Cuba possible under a few heavily regulated guidelines. Now, American travelers can book through a Cuban travel organization that has an official license from the U.S. State Department.

First and foremost, if you’re NOT an American citizen, you can skip ahead. Traveling to Cuba from any country outside of the US is as easy as booking a flight.

If you are a US citizen, the Federal government licensing initiative titled “people-to-people travel” has opened travel to Cuba as part of a campaign to discover the cultural aspects of the country and its people. There is a catch, however. You will have to book a group tour with an officially licensed Cuba travel organization in order to make the trip.

You’ll have to fly from one of the limited airports that fly directly from the US to Cuba.  Those include O’Hare International Airport, Baltimore, Dallas/Fort Worth, New Orleans, Pittsburgh, Tampa, Atlanta and San Juan, Puerto Rico, Los Angeles, Miami and New York.

An average tour may include stops at museums, historic sites and interaction with local citizens. However purely recreational activities, like visiting the beach or scuba diving are “discouraged” under the federal mandates. Luckily, there are plenty of cultural activities in this beautiful country to help keep you occupied. Here are just a few examples.

The city of Havana has an architectural heritage spanning more than five centuries.  Some of the most interesting places to visit in La Habana Vieja (old Havana) are:

The Malecón is the avenue that runs along the seawall at the northern shore of Havana, from Habana Vieja to the Almendares River. In late July and early August, El Malecón de Cuba comes alive with the sights and sounds of one of Cuba’s biggest festivals, the Havana carnival.

Zapata Peninsula and the Bay of Pigs

One of the most talked about events in Cuban/American history is known as the Bay of Pigs invasion. In 1961, a CIA-sponsored paramilitary group, under orders from the US Government, attempted to overthrow the revolutionary left-wing government that was controlled by Fidel Castro. The result was an embarrassing failure to the United States and its president John F. Kennedy. The aftermath of the Bay of Pigs disaster helped strengthen Castro’s relationship with the Soviet Union and eventually led to the Cuban Missile Crisis of 1962.

Today there is little to see at the Bay of Pigs (Bahía de Cochinos) that has to do with the air and sea attack. There are monuments on the roadside marking the fallen and a museum about the invasion. For history lovers, the museum is well worth the trip.

The Castillo del Morro is picturesque fortress guarding the entrance to Havana bay.  It first saw action in 1762, during the Seven Years’ War. The Castillo was built by the Spanish to protect from attacks by sea, however it was not as effective when faced with a land attack. The British exploited this fault and captured the Castillo a year later.  After the British handed over the Castillo in 1763, the fortress at La Cabaña was built to prevent this from happening again.

Catedral de San Cristóbal is the most prominent building on the Plaza de la Catedral. The cathedral was built after 1748 by order of the bishop from Salamanca, Jose Felipe de Trespalacios. The Cathedral is said to be the only example of a Baroque facade that was designed with asymmetrical features – one of the towers is wider than the other. This particular feature was conceived in order to allow the water that tended to accumulate on the plaza to freely flow through the streets during the colonial period, when it was built.

El Capitolio, or National Capitol Building in Havana, Cuba, was the seat of government in Cuba until after the Cuban Revolution in 1959, and is now home to the Cuban Academy of Sciences. Its design and name are similar to the United States Capitol in Washington, D.C. Completed in 1929, it was the tallest building in Havana until the 1950s. 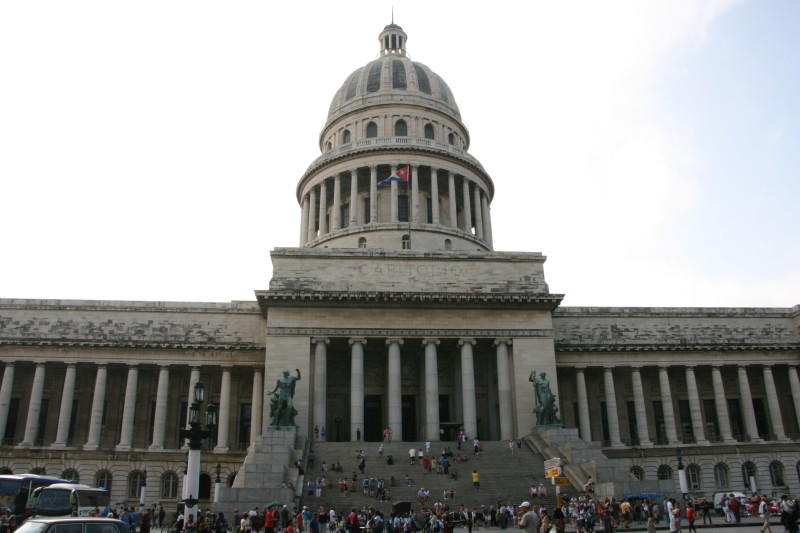 The Castillo de la Real Fuerza (Castle of the Royal Force) is a star fort on the western side of the harbor in Havana, Cuba.  It was originally built to defend against attack by pirates, but it suffered from a poor strategic position, being too far inside the bay. The fort is considered to be the oldest stone fort in the Americas, and was listed in 1982 as part of the UNESCO World Heritage site of “Old Havana and its Fortifications.” 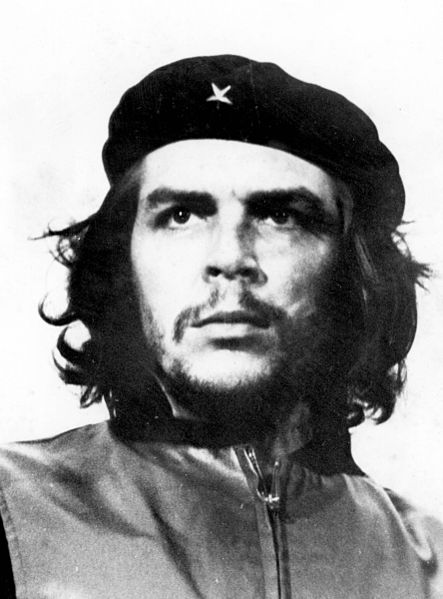 No doubt you’ve seen this picture of Che.

The Che Guevara Mausoleum (Mausoleo Che Guevara) is a memorial in Santa Clara, Cuba. It houses the remains of executed Marxist revolutionary Ernesto “Che” Guevara and twenty-nine of his fellow combatants killed in 1967 during Guevara’s attempt to spur an armed uprising in Bolivia. The full area which contains a bronze 22-foot statue of Che is referred to as the Ernesto Guevara Sculptural Complex. Che and Castro worked together during the Cuban revolution, which is why he is memorialized here.

Unlike some latin foods like Mexican, traditional Cuban food is seasoned – but not spicy – and is rather mild to taste. Dishes were developed from native crops as well as produce and meat that were introduced from Spain. Of course a main staple to any Cuban dish is rice and beans… and if you haven’t had Arroz con pollo, you have probably never visited South Florida.  Plantains and yucca (a root) are other famous Cuban ingredients.

When you travel to Cuba, you will find that many people have opened their homes to tourists.  These privately owned restaurants known as paladares, started in the mid 1990s, as part of the government’s introduction of limited private enterprise.

La Guarida, one of the most famous of these paladares,  is a hugely popular restaurant located in the heart of central Havana. “La Guarida” means the shelter, the refuge, the hideout.

Channel the spirit of Hemingway at two of his favorite local bars, La Bodeguita del Medio and El Floridita.

Both are considered “tourist traps” by the locals, but will still provide a beautiful photo opportunity and a nice place to unwind while sipping a mojito… or two. These spots are usually more pricey than some of the less-famous local bars.

There are plenty of real Cuban bars in the city that will serve well to do some “cultural discovery.” Bar Monserrate and Lluvia de Oro both have great reputations for providing some local flavor.

Havana’s most famous hotel, the National first opened its doors in 1930 and has been a playground for the rich and famous ever since. For an outstanding view visit the hotel bar La Terraza to enjoy a cocktail and take in the breathtaking view of the Malecon, the walkway that stretches along Havana harbor.

Traveling to Cuba through a third country

If you’re more of an adventurous person and would rather see the country on your own, many US citizens have traveled to Cuba through a third country, like Mexico or Canada.

You can get a Cuban tourist card at airports in these countries, good for up to 30 days visiting Cuba, to be able to book a flight into and out of Cuba – as long as you don’t return to the US first. The Cuban government welcomes Americans to visit and Cuban customs and immigration officials know to not stamp the passports of Americans entering the country.

Varadero is a resort town in the province of Matanzas, Cuba, and one of the largest resort areas in the Caribbean. It is a favorite to European and Canadian tourists, but still considered a recreational resort and therefore discouraged as a stop on the “people to people” initiative by the US State department. If you decide to travel to Varadero, plan to stay within the resort area. It is a peninsula with a toll road and can be rather difficult to get in and out. There are bus tours that travel through the resort but they can be restrictive. Renting a car is a good option, but not quite as easy for American tourists.

Cayo Coco is an island in central Cuba, known for its all inclusive resorts. It lies within the Ciego de Ávila Province and is part of a chain of islands called Jardines del Rey (“the King’s Gardens”). Just like the other resorts in Cuba, you will get a taste of the island’s culture but nothing like traveling into the mainland. Plan to take a tour into Old Havana at least one of the days of your stay.

Dangers of traveling to Cuba without US permission

Of course there are risks associated with illegal travel to Cuba. If you are caught traveling illegally to Cuba, you could face very large federal fines. Also, clearing US customs could be a very lengthy and miserable experience. Expect to be detained and questioned.

Also, Cuba is ruled by an unpredictable, Communist, government so if you run into any sort of trouble on Cuban soil, there is no US embassy available to help you out.

Tips and tricks for travelers

The Cuban attitude toward tourists is generally positive. Crime against travelers is very low. Most times, the locals will try to get you to buy their drinks or their cheap cigars. So be aware of little “scams” like that. 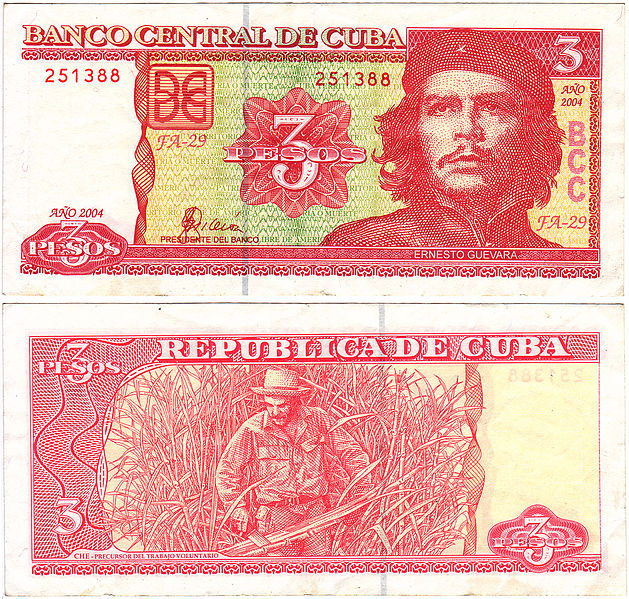 Bring cash.  You can exchange the US dollar into the Cuban peso or CUP, just make sure that you are getting the proper rate. You can check websites for the current rate. That being said, the US dollar is generally accepted in most places. Credit and debit cards issued by US banks will not work in Cuba – so keep that in mind when planning your trip.

Some travelers like to bring items to trade with the locals. Obviously, tipping with cash is best but many have been successful bringing small items to trade like pens, small toys, books, candy, cookies. Remember, it is a very poor country.

Last tip…just go. Cuba is a wonderful place to visit whether you are interested in history or not. With the new regulations, travel to Cuba is legal and safe these days. 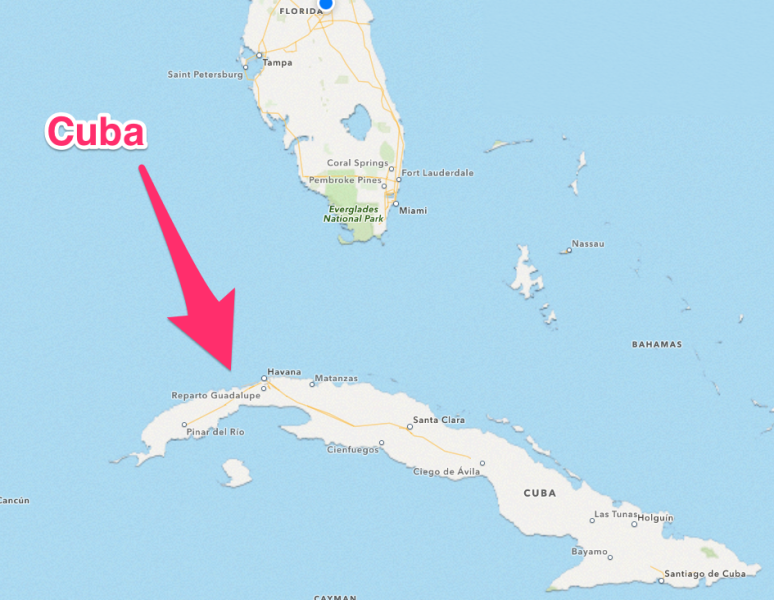 Producer and co-creator of the Travel Thru History television series.
1 POST COMMENT
NEXT ARTICLE
What Do You Know About Cuban History?
March 4, 2014 - 4:51 pm
PREVIOUS ARTICLE
Will Ancient Wonders Ever Cease at the Acropolis in Greece?
February 24, 2014 - 9:00 am