Modern luxury travelers know that a trip to Dubai can be a thrilling experience. The city is home to manmade islands, an underwater hotel, and several of the world’s tallest buildings. Attractions include a massive indoor downhill ski course and the city-within-a-city, Madinat Jumeirah. But Dubai hasn’t always been a thriving city where oil wealth and imagination made almost anything possible. Travel to Dubai picked up in the 1980s with the help of the royal family, and tourism is now one of the city’s biggest priorities.

A Brief Look at Dubai History, Culture, and Geography

The tiny fishing village that once occupied this land can no longer be seen – Dubai has grown exponentially beyond its humble roots. In the 1890s, the city developed a reputation as a pearl fishing center, and wealth first entered the region. By the 1930s, a recession, royal squabbles, and social pressures squashed the pearl industry and the Emirate returned to a relatively poor status. By 1968, however, oil was discovered. Although the oil price fluctuations have greatly affected Dubai’s economy and culture over the years, the city has grown larger and richer. In 1985, increased focus was placed on tourism, and by 2003, the IMF recognized the city’s financial importance worldwide.

Dubai’s origins as a fishing town in an Arab country are absent from its economy and landscape, but present in its people. Emiratis are welcoming to foreigners, but there is an expectation that guests follow (or at least respect in public) local customs. Pork and alcohol cannot be consumed in public, although they are served in some restaurants, bars, and hotels. Women are expected to wear skirts or dresses that extend below the knee, and while Emirati men prefer to wear traditional dress (a long white shirt-dress and belt, with an accompanying headdress), foreign men can wear trousers or slacks. Travel to Dubai can be an expensive proposition, so plan carefully.

Don’t expect it to rain while you are in Dubai. This coastal city is water-scarce, and although there are an abundance of water parks and fountains, they aren’t supplied by groundwater. Dubai depends heavily on desalination plants. Interesting fact: The first environmentally friendly mosque in the Muslim World, the Khalifa al Tajer, was opened in Dubai in July, 2014.

When You Travel to Dubai, UAE…

The sky is the limit in this Emirati city – literally. You can go hot air ballooning if you like, or head out on a Desert Safari. Try sandboarding, shopping, or check out one of the numerous art galleries and museums in the city. Dubai offers no shortage of entertainment for Western guests – although you may be hard-pressed to find many locals at the city’s most popular attractions. Oil wealth, tourism, and the now-extinct pearl industry made Dubai what it is: a city where Arab culture and Western wealth mingle with imagination, and high-priced luxury and opulence are the norm.

Decreasing oil wealth in 2001 led to the idea for Dubai’s Palm Islands, Jumeirah and Jebel Ali. The two islands are intended to serve as tourist destinations, residential living, and to serve as a holiday destination that would help the Emirate accommodate the loss in oil revenue. These massive earth-moving projects created an environmental impact that has thrown the ecosystem in the area into chaos. Still, the size and scope of the projects makes them worth the visit. If you’d like to stay on the islands, Dubai’s Atlantis hotel is a five star resort that caters to couples and families, and is located on Palm Jumeirah. The Palm Jumeira as seen from the International Space Station. Photo via wikipedia.

Check Out the Dubai History Museum

Located inside the Al Fahidi Fort, the Dubai Museum opened its doors to the public in 1971. The museum includes artifacts from 3000 BC to the present, and receives more than 1 million visitors annually. The fort that houses the museum is Dubai’s oldest structure, and was built to protect the local population from nearby tribes. You’ll find information on Arabic culture and the influence of traders from Europe, Africa, and Asia here, as well as archeological discoveries from the surrounding area. Dubai was under British influence for quite some time, and English is commonly spoken in the city. The existence of the UAE is largely the result of British creation of the Trucial States in the 1820. That strong influence can still be felt in Dubai, and is obvious in the museum, as well. One place you won’t find it is on the road, however – Dubai switched from driving on the left to driving on the right at 5 AM on September 1st, 1966. If the city’s insane traffic leaves you a little stressed, just think how drivers must have felt then!

Walk Through the Historic Shindagha and Bastakiya Districts

Built by Iranian pearl and textile traders at the end of the 19th century, Bastakiya is one of Dubai’s most charming and recognized districts. The architecture here is captivating. Visitors often feel like they’ve stepped back in time, to an earlier Dubai. The buildings here feature wind towers, a unique feature that was used to naturally cool homes in parts of southern Iran, and works by pulling cool air into the home. Buildings here are made from limestone, coral, and gypsum. They feature intricate wooden lattice shutters, and the occasional hanging oil lamp can also be spotted. Bastakiya offers many art galleries, cafes, and even a cultural center, giving visitors the chance to experience a more traditional, less flashy, Dubai.

Nearby Bastakiya, you’ll find the Shindagha district. Also populated by wind-tower topped homes, this area is famous for something else – it once housed the ruling elite, the Maktoum family of Dubai. Today, museums, a copy of old Dubai, and Shindagha Tower number among the attractions in this part of town.

This impressive architectural feat is world-famous for its architecture and engineering. Towering 828m, it is the world’s tallest building. If you love Armani, consider staying here – the Armani Hotel is located in this huge structure, along with a mix of offices and apartments. An observation deck on the 124th floor offers views of the surrounding area that will literally take your breath away – especially after the rapid ride to the top at 10 meters/second on the elevator. You’re not at the top on this deck, however. The building has more than 160 stories. It also boasts the highest occupied floor in the world, the elevator with the longest travel distance in the world, and the highest outdoor observation deck in the world, among several other records. The tallest building in the world. The Burj Khalifa, Dubai. Photo via wikipedia.

Often criticized as an excess, this impressive structure took more than 12,000 laborers from 100 countries around the world 6 years to build. 380 engineers participated in the building’s construction, and more than 31,400 metric tons of rebar was used to reinforce the structure.

While you try to wrap your mind around the sheer height of this building, remember that Tom Cruise scaled the side of it, without the help of a stunt double. I bet your travel to Dubai will be a little more exciting with that idea in mind…

Dubai is a bustling metropolis, and there is plenty for kids to do while here. If you are bringing the little ones along, consider stopping by Dubai Creek Side Park – from Dubai Children’s City to the Dubai Dolphinarium, Creek Side Park cable cars and the creek dhow tours, there is something here for all ages. Wonderland is nearby, as well. The Dubai Mall also offers quite a few kids’ attractions, including Sega Republic and the Dubai Ice Rink.

Next to the Burj al Arab, you’ll find Wild Wadi – a water park that children love. The Dubai aquarium and Ski Dubai are also kid-friendly and lots of fun. For the 12 and under set, two attractions outside the city are worth the trip – the Al Ain Zoo (better and more humane than the Dubai Zoo) and Ice Land Water Park. Older kids may not enjoy these as much, so bear that in mind when planning your trip.

The Souks (or Souqs) in Dubai are famous for their bartering, beauty, and wonder. They capture the feel of ancient trading markets, but offer products from around the world. Expect to spend hours wandering them – it’s worth it, even if you aren’t planning on buying anything. From gold and textiles to leather and perfume, you’ll find a wide variety of local and international goods, including the world’s largest gold ring (Guinness Book verified).

Don’t miss the Meena Bazaar for a look at the multicultural aspect of Dubai. You’ll find the Hindi community thriving here, and perhaps even catch of glimpse of the two Hindi temples in the area. Due to the high number of Indians living here, the majority of the goods in the bazaar are Indian in origin, and include everything from furniture to spices.

The Old Souk is another must-see. From fabulous silks to intricately crafted slippers, there’s no shortage of wow factor in this textile market. Buildings here are traditional in style, and incorporate the wind tower design to keep them cool. There are three names for this souk, so tell your taxi driver that you are heading to Cosmo Souk, Textile Souk, or Old Souk.

Note: If you visit the Karama Market (one of the ten souks), keep a tight grip on your purse or wallet – although it’s a fun and exciting environment, it’s also home to many pickpockets and thieves.

This world-famous tower is more than one of the city of Dubai’s most notable attractions. Inside, you’ll find nine restaurants, each amazingly decorated and tantalizingly different. If you’re traveling solo or as a couple, head to the Skyview Bar for sunset, to take in a view that you won’t find in any other dining facility in Dubai. Bringing the kids along on your trip to Dubai? Al Muntaha (Arabic for “the Top”) offers a similarly stunning view, paired with a kid’s menu. The atmosphere in all of the Burj al Arab restaurants is fine dining – even in Al Montaha (“the Oyster Shell”), a restaurant with an aquarium at its core that will captivate your kids’ imagination.

Located in the Grand Hyatt Dubai, this Lebanese restaurant is one of the city’s top spots for locals and visitors alike. The exciting atmosphere includes everything from belly dancers to a Bedouin-tent décor that contrasts sharply with much of Dubai’s modern feel. Like many of the restaurants in the tourist part of the city, it’s a fine dining atmosphere. 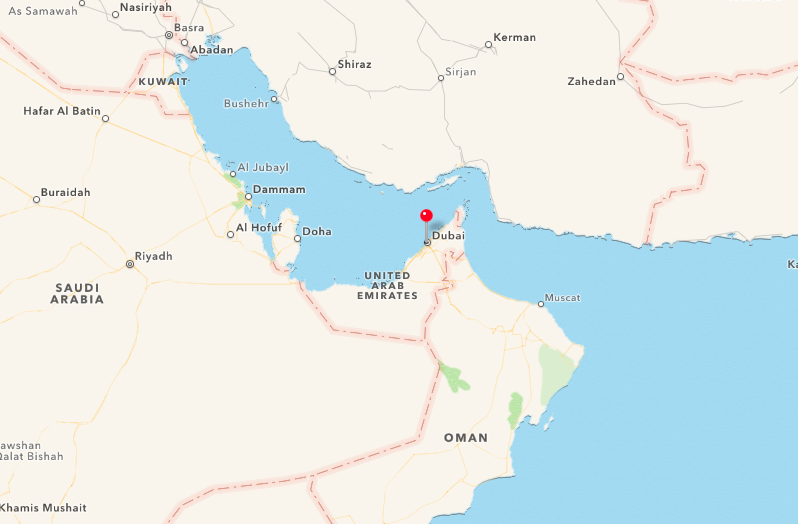 What is AirBNB and is it the Future of Travel?

Behind The Scenes Video – Travel Thru History

I'm a fan of honest words, clarity, and impact. A writer, editor, and translator, I spend my days guzzling coffee like a champ, living the expat dream, and being mom to world's sweetest preschooler. I’m co-owner and copywriting head at Rusmexus Writers, a history buff, and have a background in international relations.
0 POST COMMENT
NEXT ARTICLE
The Essex: The True Story of Moby Dick
January 29, 2015 - 2:40 pm
PREVIOUS ARTICLE
Antarctica: Cruises to a Scientific Utopia
January 22, 2015 - 2:30 pm