You’ve heard about the wreck of the Titanic, but there’s more to this ship’s story than popular history wants to tell you. We’ve dug up the information on some interesting and strange coincidences that surround this ship. Call them mysteries if you will, they gave us the chills.  We already visited the ultimate Titanic museum, Titanic Belfast, on the Belfast episode, but these Titanic coincidences surprised us… read on for more!

1. The Titan and the Titanic

Imagine a huge ship – the largest of its day – crossing the ocean between the United States and the United Kingdom, striking an iceberg, and sinking. We’re not talking about the RMS Titanic, although the story is eerily similar. Fourteen years before the Titanic hit the water, Morgan Robertson wrote a compelling sea yarn about the Titan. This fictitious ship shares scarily similar specs with the Titanic, and faced the same fate as the now famous and ill-fated seafaring giant. Some passages come frighteningly close to describing the Titanic:

From the bridge, engine-room, and a dozen places on her deck the ninety-two doors of nineteen water-tight compartments could be closed in half a minute by turning a lever. These doors would also close automatically in the presence of water. With nine compartments flooded the ship would still float, and as no known accident of the sea could possibly fill this many, the steamship Titan was considered practically unsinkable.

But Robertson’s descriptions of the wreck itself were even more disturbing. You can read the full text on the Project Gutenberg Library online.

A photo of the iceberg that most likely hit the Titanic.

Robertson claimed that the story had been “given” to him in a psychic vision. His book, Futility (retitled The Wreck of the Titan), went out of print before the Titanic was made, but was re-released shortly after the tragedy, with a few minor details altered (some say, to reduce the similarities). Robertson’s tale condemned humanity’s hubris in creating an “unsinkable” ship. His work of fiction was adapted to film and stage, but fame couldn’t save Robertson, who died of an overdose of a once commonly-prescribed medicine. His warning to humankind went unheeded, and his life ended just three years after the Titanic sank.

2. William T. Stead and the Titanic

A prominent newspaper man in the United Kingdom, and often considered the father of the modern tabloid, William T. Stead died aboard the Titanic. Although little is known about his final hours, he was generally recognized as a good guy with a soft spot for the psychic and spiritual. That wasn’t too uncommon in his day, though – Spiritualism was a fad, and plenty of Europeans and Americans spent time and money on séances, psychic visits, and the like.
Two articles he wrote are considered by a few folks to be psychic. I don’t know about the whole concept of premonitions, but I will say this – he got a few details scarily correct. It’s one titanic coincidence I won’t soon forget!

A 1912 illustration of the Titanic’s sinking entitled “The Sad Parting.”

On March 22, 1886, Stead published an article about a ship that sank when it collided with another ship, killing most of the people on board. The reason for the deaths wasn’t the collision, though – there were too few lifeboats on board. He wrote the fictional account as a warning of potential consequences if ships went to sea with too few lifeboats.

Later, in 1892, he published an article about the rescue of passengers whose boat sank when it collided with an iceberg. Taken separately, the two stories don’t really seem that creepy. Combine them, and it makes you wonder a bit about Mr. Stead, and the times he lived in. 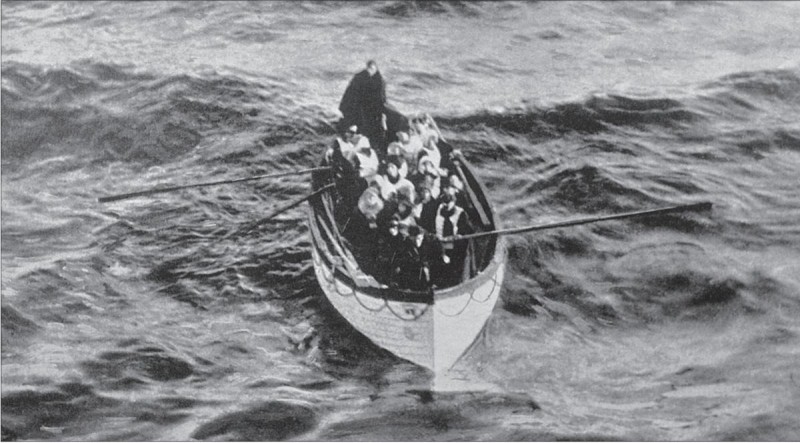 This photo shows the Titanic’s lifeboat number 6, loaded with survivors.

3. The Titanic and the Poseidon Adventure

When the Titanic sailed, motion pictures were just getting started. They weren’t popular among the wealthy, who viewed them as a passing fad. But the Titanic was showing a few…and on the night it sank, the feature was The Poseidon Adventure. Curious what it was about? If you guessed a sinking ocean liner and a group of passengers that struggled to survive, you were right. The film was so popular that it was screened twice that night.
Timing was everything – in a titanic coincidence, the first showing began at 11PM, just before the Titanic struck the iceberg that sank it. The second showing began after the ship started sinking, and many passengers likely stayed in their seats until the film concluded at 1AM – too late to be saved.

4. The Titanian and the Titanic

In 1935, sailor William Reeves was aboard a ship named the Titanian that was crossing the Atlantic. Reeves, according to legend, had a bad feeling about the voyage and sounded the alarm to prevent the ship from hitting an iceberg before ice was seen. Sure enough, Reeves was right – the ship was in an ice field and required the assistance of an icebreaker in order to reach London safely.

It appears that Reeves embellished his own story of the events in a few articles written after the fact, claiming that the ship was at the same geographic location as the Titan from Morgan Robertson’s book. In reality, they were very far from that site. What is true, however, is that Reeves was born on either April 14th or 15th (sources disagree), 1912 – either the day that the Titanic had its fatal collision or the day it sank. Now that is an odd coincidence…

Strangely enough, also in 1935, the British passenger ship Titan collided with the German ship Uruguay’s floating dock in Hamburg on the 15th of November.

5. The Moon, the Sun, and the Sinking of the Titanic: Coincidences discovered only recently…

There were a few crazy coincidences in the sky before the Titanic hit the infamous iceberg. And they had nothing to do with psychics or spiritualists. Science actually has a pretty compelling explanation…

You don’t just wind up with icebergs blocking a common shipping lane. A natural phenomenon was at work. The moon was closer to the Earth than it had been in 1,400 years, and the Earth was also closer to the sun. Combined with a spring tide, these events dislodged several icebergs and set them afloat in the Titanic’s way.

No matter what caused the fatal accident, the number of strange coincidences speak more about the mindset of the time when the Titanic sunk than they do about the wreck itself. People were worried about the low number of lifeboats on passenger ships of the day, and with good reason. Engineering pushed the limits of possibility, but the space and weight saved by reducing the number of lifeboats also cost hundreds of lives.

Even the name of the ships involved says quite a bit – the Titans, for whom the ships were named, were the second generation of Greek deities, and although they overthrew their parents, they were also overthrown shortly afterwards. The reign of Titans, both ships and gods, was short-lived.

I'm a fan of honest words, clarity, and impact. A writer, editor, and translator, I spend my days guzzling coffee like a champ, living the expat dream, and being mom to world's sweetest preschooler. I’m co-owner and copywriting head at Rusmexus Writers, a history buff, and have a background in international relations.
0 POST COMMENT
NEXT ARTICLE
7 Historical “Facts” That Might Be Fiction
June 17, 2015 - 12:59 pm
PREVIOUS ARTICLE
Skopje, Macedonia: The city that bridges two worlds
May 19, 2015 - 12:52 pm