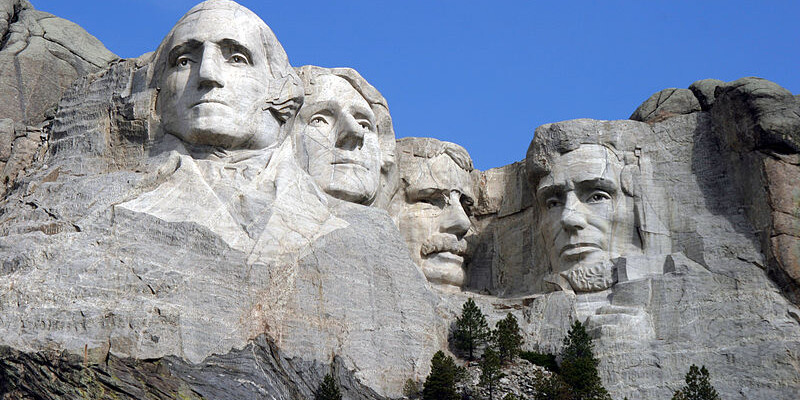 Keystone, South Dakota is an exciting town to stop at on your next cross-country road trip and is packed with plenty of family oriented activities and attractions to take part in.
Brandon Speakman on February 17, 2021 - 2:17 pm in City Spotlight, Historical

Things to do in Keystone, South Dakota

Keystone is a nifty town in the Black Hills region of Pennington County, South Dakota. Keystone is home to Mount Rushmore National Monument, Crazy Horse Memorial, Black Hills National Forrest, and many more interesting attractions. Keystone is a one-of-a-kind town that will leave you breathless with its monuments and beautiful scenery.

Keystone saw a population boom (of mostly prospectors) after placer gold was found on Battle Creek in 1875, which was one of the “first strikes in the Black Hills Gold Rush.” The first white man to settle in the area was Fred Cross, who built a cabin in Buckeye Gulch in 1877 (near the site of the present-day Powder House Lodge), as well as a stamp mill for crushing ore. Eventually, 300 miners moved to the area, and that helped establish the settlement of Harney City, which included stores, saloons, and a sawmill. Most of the miners were heading to Deadwood Gulch in the northern Black Hills, as significant amounts of gold were being discovered in that area. Eventually, the placer mines in Harney City started to dwindle, and miners shifted their focus to mica and tin. The Etta Mine became a popular mine to find high amounts of tin ore, which influenced a group of American and British stockholders to form the Harney Peak Tin Mining, Milling, and Manufacturing Company. While the Harney Peak Tin Mining, Milling, and Manufacturing Company received 1,100 mining claims over 5,000 acres, the Etta Mine was unable to make a profit and closed down in 1886. 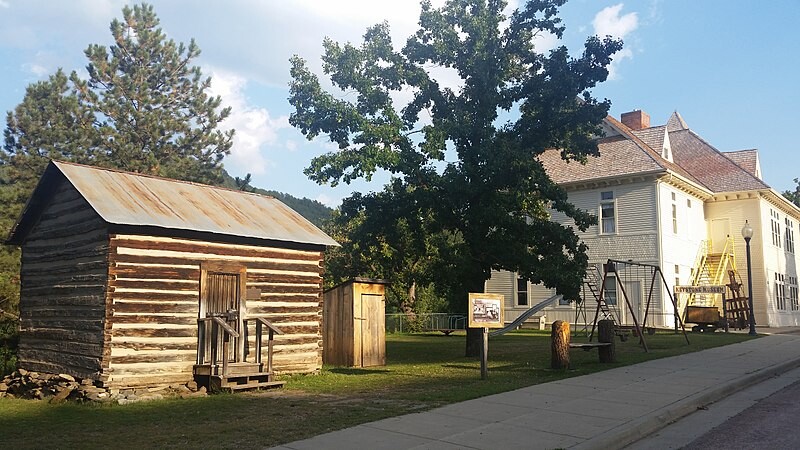 In 1891, William Franklin, Thomas Blair, and Jacob Reed discovered the Keystone Mine and opened a stamp mill. The Keystone Mine was a huge success financially, which prompted the townspeople to name the town after it. The event that made a huge impact in the town’s history was when Franklin came across a larger strike at the base of Mount Atnea in 1894 (eventually named the Holy Terror Mine, after Franklin’s wife.) After the Holy Terror Mine produced over $40,000 in gold in the first year, and between $10,000 and $70,000 a week after the first year, Keystone’s population started to boom, with most of the new townspeople being prospectors, merchants, and businessmen. Keystone started building more houses, hotels, saloons, churches, and a school, in order to meet the needs of the influx of citizens that were moving to the area. 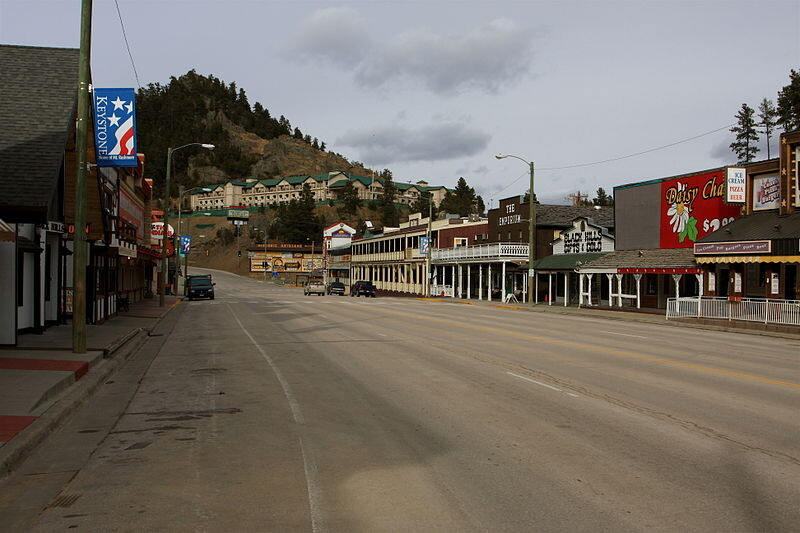 Over the next decades, the town of Keystone went through a lot of boom-and-bust periods and the mines saw a number of fires and mining accidents. The Holy Terror Mine closed in 1903, which led Keystone into an economic depression. Keystone’s depression led to a population decline of only 250 people (one-tenth the population of when Keystone was a booming town.) Workers were still mining in Keystone sporadically and the town was about to go under, until South Dakota’s State Historian, Doane Robinson, pitched the idea to promote tourism in the Black Hills “through mountain carvings of historical figures in the granite outcroppings.” While the town of Keystone will never see the boom it saw in the early 1900s, it has become an extremely popular town for travelers to pass through to view Mount Rushmore National Monument and the Black Hills. Today, Keystone is a fascinating town to explore, filled with beautiful landmarks and outdoor scenery. 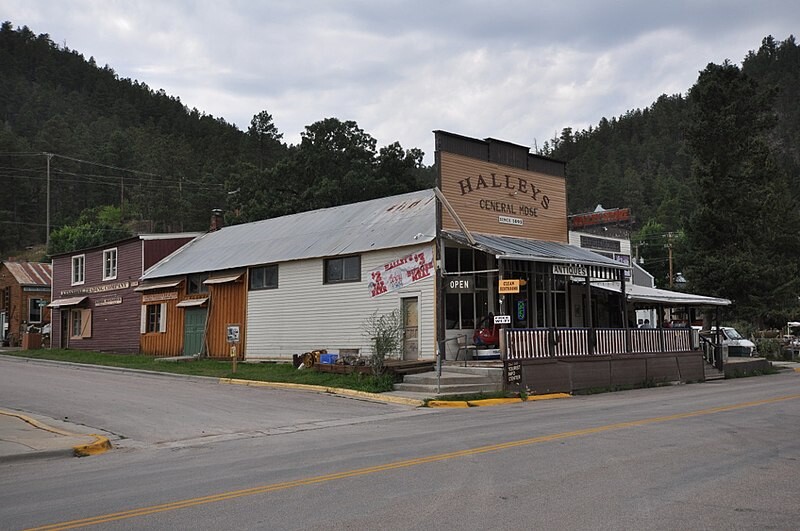 Mount Rushmore National Monument first became an idea because Doane Robinson, of the South Dakota Historical Society, wanted to boost the economy of South Dakota by building something that would attract tourists. In 1923, Robinson suggested that the monument be built from the granite cliffs in the Black Hills of South Dakota. After Robinson’s proposal was approved and received federal funding, Gutzon Borglum was asked to sculpt and design the monument. Borglum chose Mount Rushmore as the permanent home for the monument, as the cliffs seemed to be the most stable in the area.

The Lakota knew this rock formation as “The Six Grandfathers” before the name was changed to Mount Rushmore, and before the rock carving began. The rock formation was named after New York City attorney, Charles E. Rushmore. Photo Courtesy National Park Service/Wikipedia 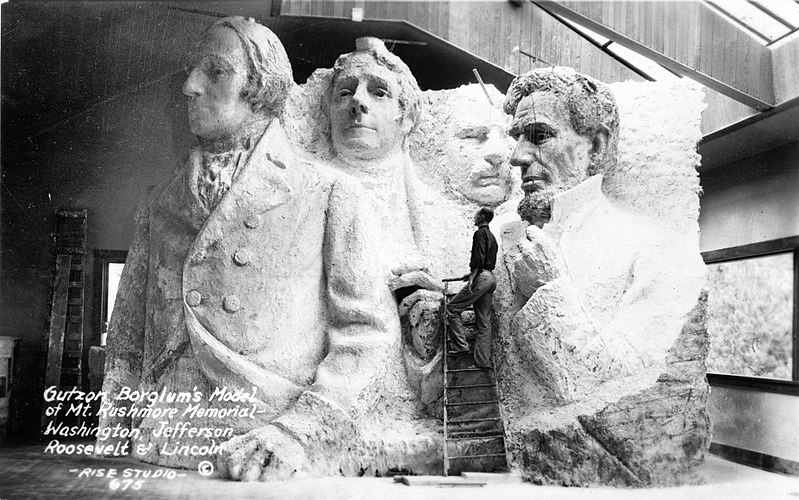 Gutzon Borglum’s model on his vision of the completed Mount Rushmore, after Jefferson was moved and “before funding ran out.” Photo Courtesy Library of Congress’s Prints and Photographs division/Wikimedia Commons

Borglum then decided he wanted to make the monument represent four former U.S. presidents. Borglum chose George Washington and Abraham Lincoln to be part of the monument because they are two of the most famous presidents the United States has had. Borglum also wanted Thomas Jefferson to be part of the monument, since Jefferson is responsible for doubling the size of the United States, due to his involvement in the 1803 Louisiana Purchase (“which included land that became South Dakota.”) The final president that Borglum chose to be on the monument was Theodore Roosevelt, at the suggestion of President Calvin Coolidge, due to Theodore Roosevelt’s introduction of the National Park Service. Borglum initially wanted to create a sculpture of each president that would go down to the waist, but due to a limit on time and funding, Borglum only sculpted out the heads of the presidents. 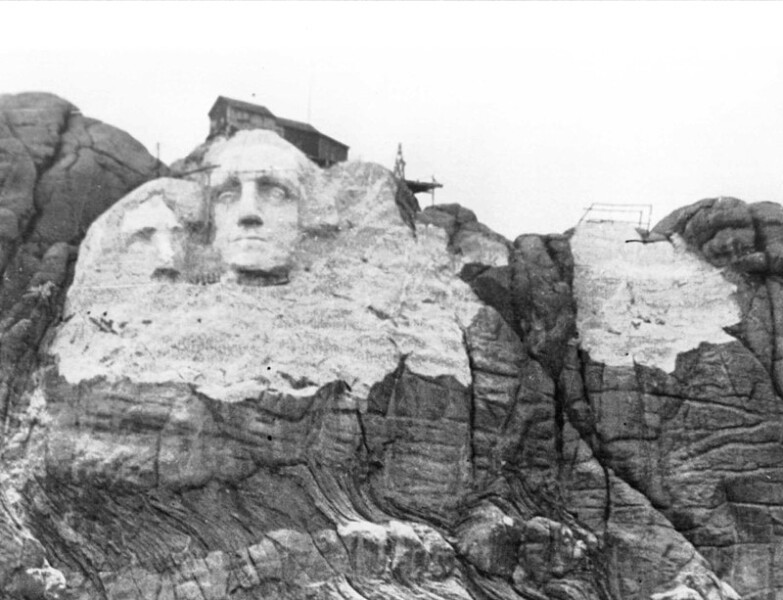 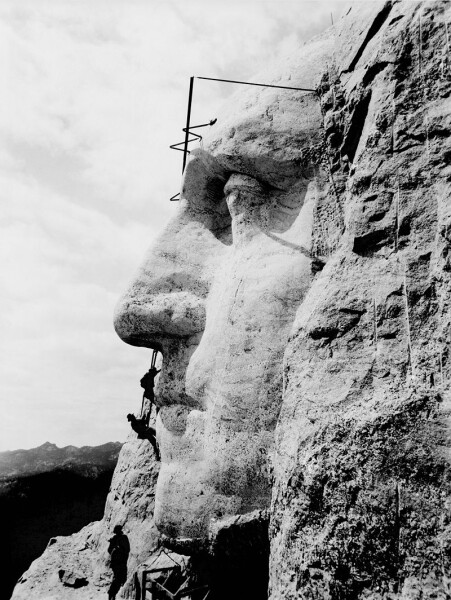 Most of the people who were hired to construct Mount Rushmore had backgrounds as miners, sculptors, or rock climbers. The workers “used dynamite, jackhammers, and chisels to remove material from the mountain.” The workers used a stairway that was built to meet the top of the mountain, as well as ropes and harnesses that secured them while they sculpted. Construction on Mount Rushmore began on October 4, 1927. In 1935, Borglum assigned an Italian immigrant by the name of Luigi Del Bianco, to be the chief carver on Mount Rushmore. 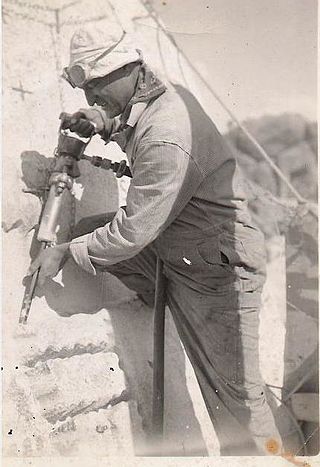 The likeness of George Washington was the first to be sculpted, but it took seven years to reach completion, due to the Great Depression. The George Washington portion of Mount Rushmore was dedicated to the public on July 4, 1934. “A large American Flag was placed over George Washington’s head before it was revealed, which became a tradition for each of the president’s heads that were revealed.” 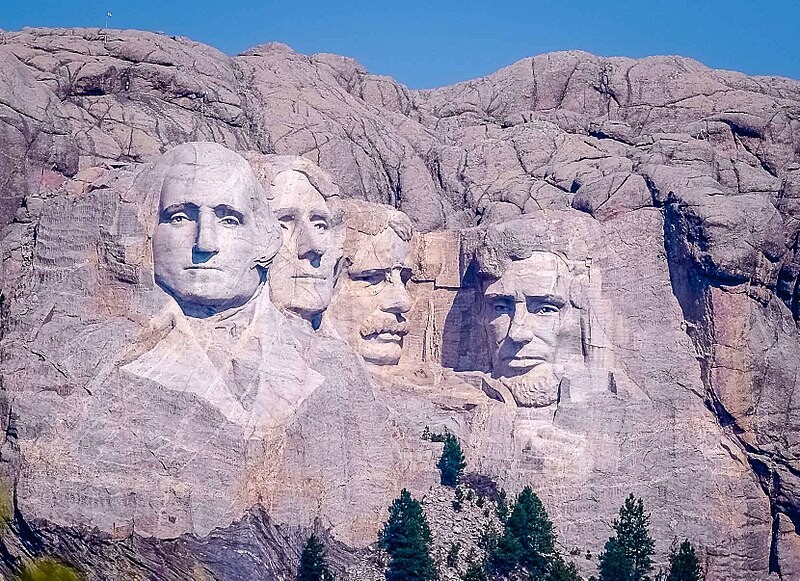 The next head to be carved into Mount Rushmore was Thomas Jefferson. Thomas Jefferson’s likeness was carved to the right of George Washington, but was blasted off at the request of Borglum, because he thought the quality was poor. Jefferson’s head was then carved into the rock to the left of George Washington. Thomas Jefferson’s head was dedicated in 1936. Carving Abraham Lincoln’s head into the rock proved to be difficult, due to Lincoln’s beard. Abraham Lincoln’s head was carved to the far right of the cliff. Lincoln’s face was dedicated on September 17, 1937, which was the 150th anniversary of the signing of the Constitution of the United States in 1787. When Theodore Roosevelt’s head was being carved, accommodations for tourists were underway including plumbing, lighting, and a visitor center. The sculptors were unable to find a rock to carve Roosevelt’s head into, so they cut further back into the mountain, which caused concern that they were cutting too far back. Theodore Roosevelt’s head was dedicated on July 2, 1939. 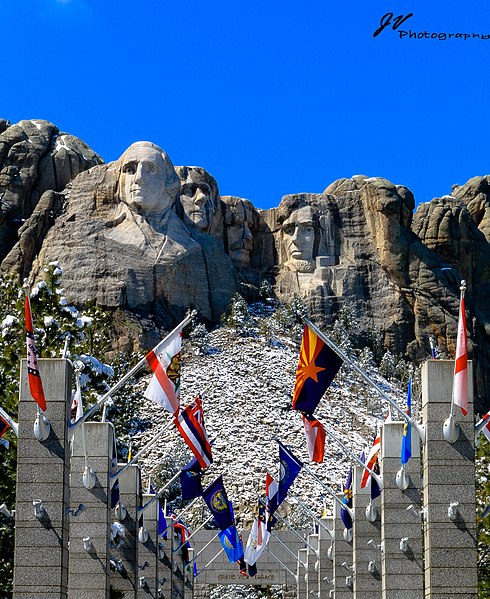 Along with the Mount Rushmore Monument, the National Park includes the Presidential Trail, a walking trail and boardwalk, and a museum that provides guests with information regarding the construction of the monument and the tools used by the workers. Mount Rushmore National Monument is Trip Advisor’s #1 recommended attraction to visit in Keystone. 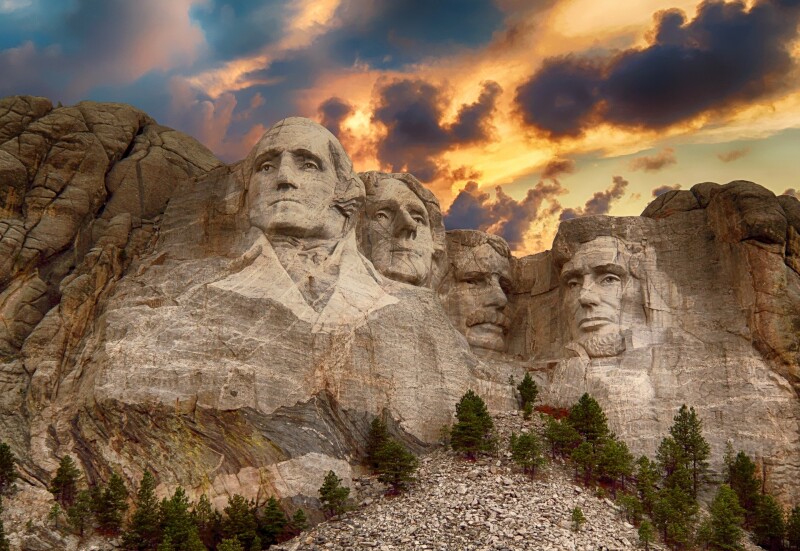 The Arikara arrived to the Black Hills by AD 1500, and were followed by the Cheyenne, Crow, Kiowa, and Arapaho. The Lakota (also known as the Sioux) arrived to the area from Minnesota during the 18th century and forced out the tribes that were already living in the Black Hills. The tribes that were forced out, moved west. The Lakota claimed the land and named it Ȟe Sápa (Black Mountains). The mountains eventually became known as the Black Hills. For many decades, there were rumors that there was plenty of gold to be found in the Black Hills, but it wasn’t until 1874 that gold was discovered in French Creek by Brevet Major General George Armstrong Custer of the 7th US Calvary. Thousands of miners traveled to the Black Hills during the 1875-1878 gold rush. 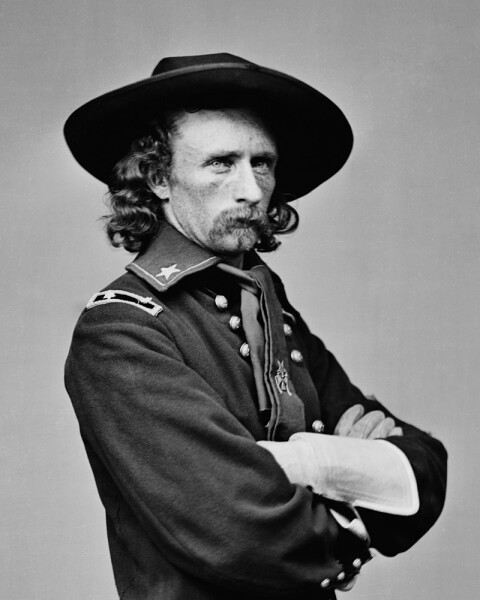 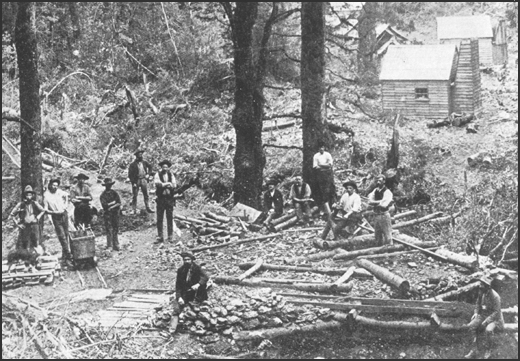 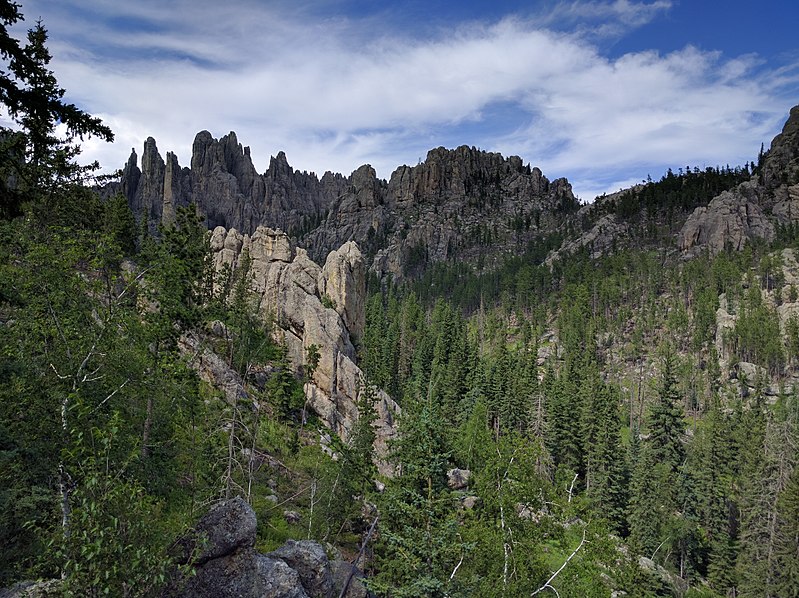 Crazy Horse was a Native American war leader of the Oglala Lakota, who is known for fighting back against the U.S. Federal government, who were intruding on Native American soil and disrupting the lifestyle of the Lakota people. The most famous protests against the U.S. military included Fetterman Fight (21 December 1866) and the Battle of the Little Bighorn (25-26 June 1876). “Crazy Horse surrendered to U.S. troops under General Crook in May 1877 and was fatally wounded by a military guard, allegedly while resisting imprisonment at Camp Robinson in present-day Nebraska.” Today, Crazy Horse “ranks among the most notable and iconic Native American tribal members and was honored by the U.S. Postal Service in 1982 with a 13 cent postage stamp that is part of the Great Americans series.” 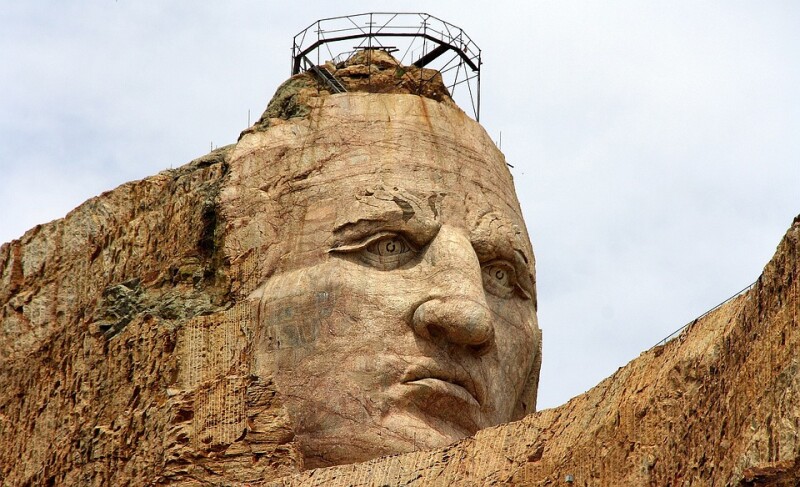 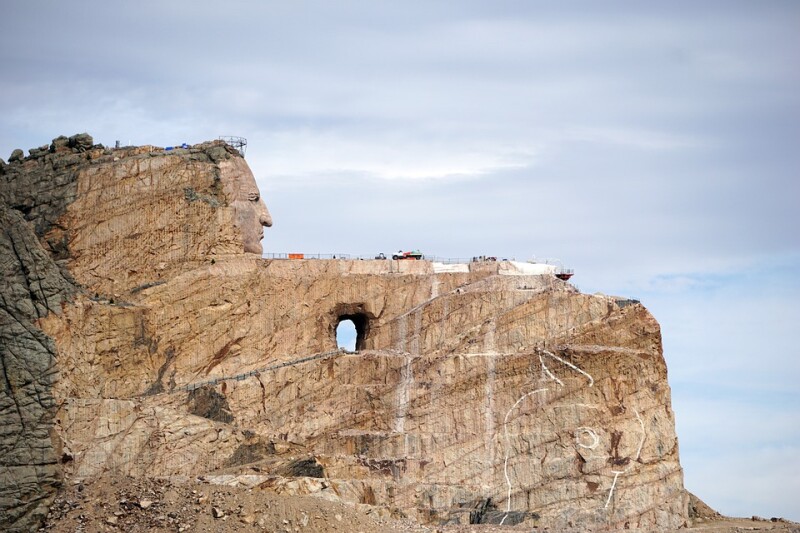 Korczak Ziolkowski agreed to take on the project, although he died in 1982 at the age of 74, before the memorial was completed. Korczak’s wife Ruth took charge of the memorial after Korczak died and oversaw operations from the 1980s to the 1990s. In 1998, the head and face of the Crazy Horse Memorial were completed and dedicated. The Crazy Horse Monument has been in progress since 1948 and is still far from being completed, as the completed vision was to have Crazy Horse riding his horse. While the Crazy Horse Memorial is still under construction, it can still be viewed in the Black Hills of South Dakota.

Keystone, South Dakota is a spectacular town to visit and should be a priority on your travel bucket list. For more information on Keystone, check out the official visitor’s guide. 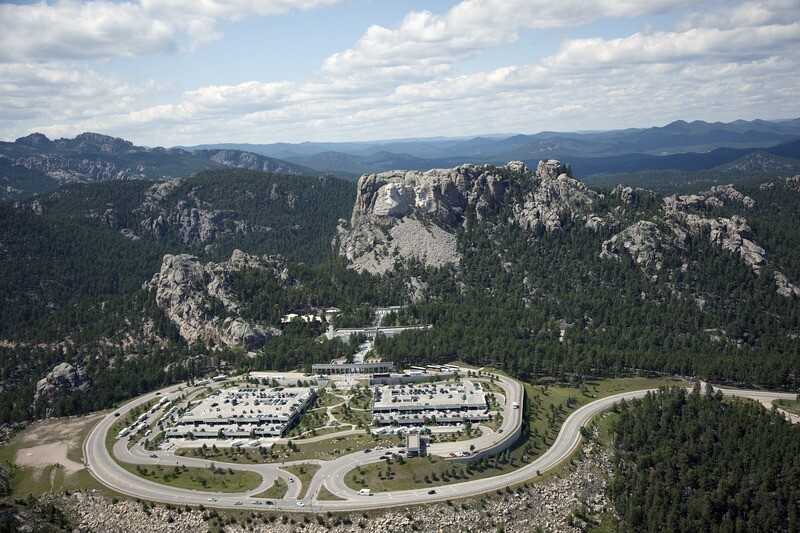