/ Historical / Port Isabel and South Padre Island, Texas: A little history and a lot of fun

Anyone who knows about Spring Break knows about Port Isabel and South Padre Island, but there’s more to these popular destinations than partying, nightlife, and great beaches.

The definition of small town, South Padre Island has a population of roughly 2,500, and offers more than 100 businesses – obviously, tourism is a factor here. The area played an important role in the days of Spanish exploration, and nearby shipwrecks date from as early as 1554. Named for a Spanish priest who was the first known settler in the area, Padre Nicolas Balli, most of Padre Island has been left in its natural state as a part of the Padre Island National Seashore. The island, despite its peaceful appearance, has been a part of four countries over its short history:

Although Fr. Balli was the first permanent resident, many Native American peoples used the area for fishing and hunting, and one of the islands historic names references this past (Isla de las Malaguitas). During the days of the Spanish empire, troops and ships would stop here, and in 1554, after three Spanish ships sank off the coast of the island, their crews lived here awaiting rescue. During World War II, the island housed an American Navy bombing range, which closed in 1960. Padres Island National Seashore opened in 1962, preserving much of the northern part of this island for future generations. The Padre Island area is home to rich oil and gas deposits which spurred some of the initial development in South Padre Island, on lands where ranching had previously been one of the most profitable activities.

In 1954, a bridge was constructed to join South Padre Island with nearby Port Isabel, on the Texas coast just 16 miles northeast of Brownsville. Although settlement in the area began in 1788, no official land claims were made until 1828. In 1849, missionaries arrived and built a seaside church. That same year, a cholera outbreak swept through the area. By 1850, Brazos Santiago, the name of the settlement at that time, was the largest cotton exporter of the region. More than $10 million of cotton left the port in 1859. The Port Isabel lighthouse was constructed in 1853, and today remains part of a Texas State History Park on the island.

In 1881, honoring the original name of the first land grant in the area, the name of the settlement was changed from Brazos Santiago to Isabel. In 1915, it changed again, becoming Point Isabel. As the importance of shrimping and port activities in the area has grown, the shipping channel has been repeatedly dredged and widened. Hurricanes affect the area occasionally. Today, the population of the area remains rather small – approximately 5,000 residents inhabit the area – but the port’s importance continues to grow, as does its function as a tourist destination.

Things to Do in Port Isabel and South Padre Island, Texas

Despite their reputations as Spring Break destinations, South Padre Island and Port Isabel, Texas offer a wide variety of activities and fun for the whole family. From museums that explore the history of this fascinating seaside settlement to a birding center and a pirate ship that you can ride, you’re sure to find at least one activity that thrills you on a trip to these seaside towns.

A 3300 foot boardwalk, five birding blinds, and a five-story tower designed to give birders great views of the surrounding area are just a few of the features of the South Padre Island Birding and Nature Center. The center also caters to geocachers and families with young children, offering opportunities for interactive adventure, as well as birding. Learn about local species and conservation efforts, explore the natural history of this fascinating location, and enjoy a quiet day surrounded by wild birds and animals indigenous to the area. One of the most popular cruises on South Padre Island is the Black Dragon Pirate Ship. This modern replica of a 17th century galleon is the perfect venue for bringing naval history to life. The Black Dragon has four masts and the ability to execute a 360 degree turn, and offers visitors all the thrill of a high seas pirate battle with none of the danger, thanks to her ten computerized “cannons.” 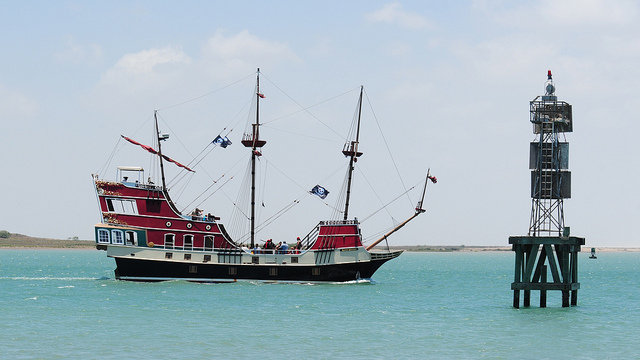 The cruises are a great trip for all ages, and include everything from pirate face painting and storytelling to treasure hunts, sword fights, and even dolphin watching. The cruises tend to stick close to land, but even in deep water, the Black Dragon is equipped with everything she needs to keep guests safe and on course, including modern radar, sonar, and GPS. Up top, however, she offers four decks of pirate adventure that create the true feel of a working pirate ship in the 1700s.

The three museums included in this group are all part of the organization Museums of Port Isabel (MOPI). Learn about three Spanish shipwrecks located 30 miles north of Port Isabel, explore artifacts from the Mexican-American War, and visit the only lighthouse that is open to the public on the Texas Gulf coast when you swing by the three museums that are part of MOPI.  A community organization with a strong commitment to providing state-of-the-art museum facilities with interactive and educational exhibits, MOPI’s museums are worth the visit, and their accessible pricing doesn’t hurt.

The Schlitterbahn family of waterparks and resorts is popular across Texas, and South Padre Island is no exception. Although it’s Spring Break mania for part of the year, Schlitterbahn is a lot of fun for the whole season, and a great destination for all ages. Enjoy indoor and outdoor attractions, resort facilities, pools, and a beachfront location. Spoil yourself and the kids a bit. You deserve it.

Ila Fox Loetscher was a fascinating woman. When she opened Sea Turtle, Inc. on South Padre Island, she already had a reputation as the “Turtle Lady of South Padre Island.” Before that, she earned her pilot’s license in her home state of Iowa, and also in Illinois. In both states, she was the first licensed female pilot. And who was on her list of pen pals? None other than Amelia Earhart.

Ila’s passion for turtles took her to new heights, and away from the world of aviation. In 1955, her husband of 32 years passed away, and Ila was left looking for new passions to pursue. She began her work with Texas’s turtle population in 1963, and found visitors so curious and interested in learning about these animals that she opened Sea Turtle, Inc. in 1977 to educate, assist in conservation, and rehabilitate sea turtles. The center was based in her home until 1999, when it moved to its present location. On January 4, 2000, Ila died.

Where to Dine in Port Isabel and South Padre Island, Texas

With prime seafront locations, there’s no shortage of great seafood on South Padre Island or in Port Isabel, Texas. If you aren’t a fan of seafood, you’re in the clear, too. Some of the state’s best Italian food is found on the island, and there are tasty, healthy options for all tastes.

Rated one of the best stops in South Padre and Port Isabel, Joe’s isn’t a restaurant. It’s an institution. Low prices, great fresh seafood, and better grilled plates than fried ones, this place is popular for spring break tourists, locals, and families on vacation. It’s been in business for years, and is far from pretentious. You’ll get flavor but no frills when you eat at Joe’s. And did I mention the oysters? Incredible.

Looking for something other than fish on the island? Start here. Gabriella’s is one of the top Italian restaurants in Texas, and although their specialty is pizza, you’ll find Italian dishes like your grandmother used to make on the menu. Don’t tell her, but Gabriella’s flavor might just outdo Nonna’s.

Fresh, light fare and great coffee are hallmarks of Yummies Bistro. When you’re tired of fried and grilled seafood, and Italian dishes just seem a bit too heavy, head over to Yummies for refreshing salads, great pies, and a dash of whimsy on your plate. Be warned that the calories you save on your meal, you’ll find in your cup. The beverage menu is amazing, but a few of the drinks could be a meal by themselves.

For more information on a historical trip to South Padre Island visit their website.