/ Attractions / Galapagos: The bizarre history of a Pacific island chain

Forget Darwin. These islands offer more than a biodiverse ecosystem that’s relatively untouched by man. They include stories of mysterious deaths, pirate ships, and whaling vessels, and a giant tortoise named Lonesome George.

Poor Lonesome George, pictured in this photo by putneymark on Flickr, died alone on June 24, 2012. He was the last Giant Pinta Tortoise.

Fresh water might be scarce here, but there’s plenty of excitement to go around. Hug a blue-footed booby and find out what it’s all about. We’re off on an island adventure this week…

A Spot on the Map

In the 1530s, cartographers in Europe were probably wondering whose lunch dripped off the coast of South America. A splotch of island popped up, but it wasn’t sandwich drippings. Fray Tomas de Bergana found the Galapagos Islands. Mother Nature had played a great game of hide and seek – 5-10 million years long. That’s got to be some sort of record…but this Spanish clergyman stumbled across the island chain and game over.

The Galapagos Islands were a wildly different place when Fray Tomas stopped by for a visit. Covered in grasses and ferns, they were populated by lots of reptiles and bird species, but free of amphibians and only a few mammals hung out here. It was the opposite of Europe, and although the Inca may have seen the island chain first, it was Fray Tomas who made it famous. 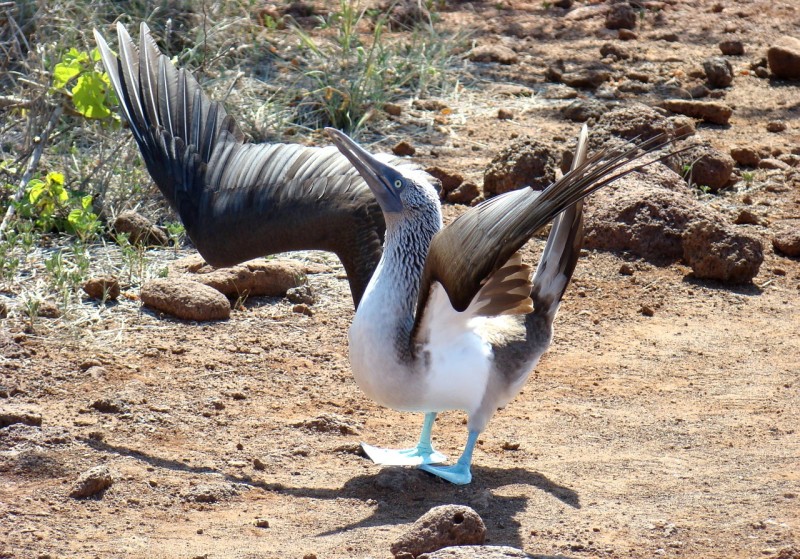 Blue-footed boobies aren’t as exciting as their name.

You’d think the first visitors to a place discovered by clergy would be blessed by God or some jazz. Not quite…unless you count their ability to stay alive as a life skill. The Galapagos Islands went from a pristine land to a pirate hangout before the ink on the first maps had time to dry. Ok…so it took a little longer than that. But not much.

By 1578, Sir Francis Drake discovered just how easy it was to plunder the Spanish from here, and made a nice living doing it. He was followed by other French, Dutch, and British “privateers” (that’s the polite term for a pirate who’s actually the hired gun of his home empire). While making themselves and their home countries rich, pirates needed to eat. So they did. The meal of choice on the islands was Giant Tortoise. Other than ruining Lonesome George’s chances of having a huge family, the pirates didn’t have much of an impact on the islands themselves. They did, however, alter human history a bit.

William Dampier was on one of the pirate vessels that swung by the Galapagos for some R&R and a little turtle feast. He even mentioned the delectable (?) butter that was made with turtle oil. And here you thought turtles were only for soup*… Dampier wasn’t just eating when he visited, though. He was writing, and what he wrote added roughly 1,000 words to the English language and gave us the term “sea lion.” 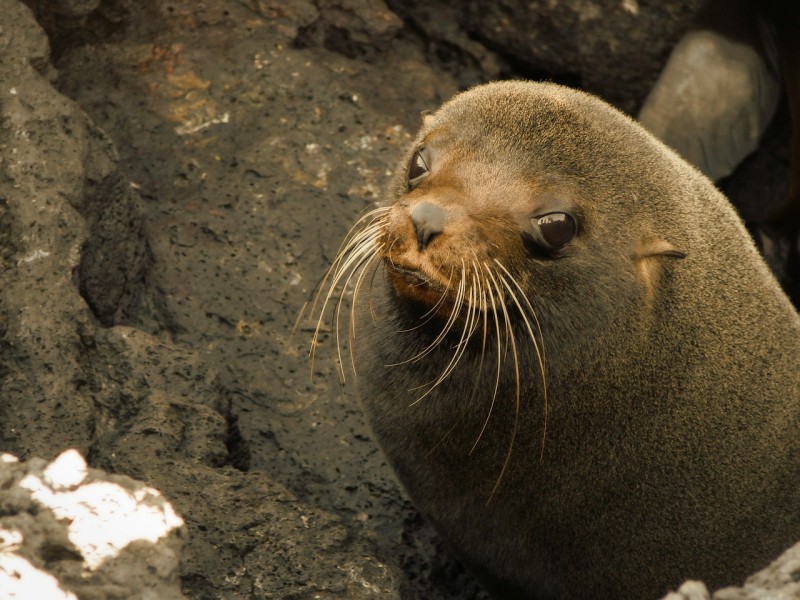 A baby sea lion in the Galapagos Islands.

Not bad for a buccaneer.

The pirate era died off, and the Galapagos Islands were almost back to normal – minus the occasional invasive species – then the whalers came. They found the infamous offshore breeding grounds where the story that inspired Moby Dick took place with a ship named the Essex at the heart of that drama.

The British once again led the pack. They brought down huge sperm whales for their blubber, chased fur seals for pelts, and ate copious amounts of giant tortoise. When it looked like there wouldn’t be enough protein for all the men, goats and pigs were brought to Santiago and Floreana islands.

Once the Brits had their fun, they went to war with America. Hello, War of 1812. And that’s how the Americans became whalers in the Galapagos Islands. Lucky for the whales, petroleum kerosene was discovered in 1840, so whale oil fell out of fashion.

The Galapagos Islands were settled a few times, starting with a drunk Irishman named Patrick Watkins. Irish Pat gained fame – or rather, infamy – among sailors after spending 4 years marooned on Floreana Island and then leaving on the Black Prince with others, but arriving alone in Guayaquil. Stories of him were so familiar that they inspired the name of a landing on Floreana Island, as well as a chapter in a novella by Herman Melville.

Irish Pat might have been the most famous inhabitant of Galapagos in the 1800s, but the islands were a popular place for short-lived homesteads. An oasis in the Sahara probably had a longer lifespan than most Galapagos colonies. The Ecuadorans, Germans, and Norwegians all gave it a go. When they couldn’t hack life on the islands, it had a short life as a penal colony, too. Even that closed by 1957. Today 21,154 people make their home on the islands, but the human population is confined to 3% of the land mass.

Scarce fresh water, little available food, and a lonely island life just aren’t for most people. And looking back at that German colony, there was that thing with the Baroness…

The Bizarre End of the Baroness

Up to this point, the Galapagos Islands sound almost normal, right? You know, minus the extreme biodiversity, sparse human contact, and bizarre lack of amphibians, large flowers, or plants with big seeds…

All that was missing was a little modern mummification, food poisoning, some self-proclaimed royalty, crazy love affairs, and a few missing colonists. In 1934, the Galapagos Islands added a crazy mystery to its history when a Bohemian German woman and her lovers moved in, along with some friends. Because, you know, every island should have a little love story to spice things up.

In 1929, Eloise Bosquet de Wagner Wehrhorn, known by her dreams as the “Empress of the Galapagos” and by her companions as “The Baroness,” arrived with her two lovers on Charles Island. The trio soon made their home and plans to open a resort which would be called the “Hacienda Paradise.” Free love in the 1930s wasn’t a great subject for public discourse, however.

The Baroness’s neighbors, the Ritters, were a quiet German couple. Only they also weren’t quite normal…they’d left their respective spouses behind in Germany and adopted a raw food, nudist lifestyle (talk about the ultimate hipsters – they beat that trend by decades…).

Rounding out the population of Charles Island, the Wittmer family’s stone home was a rarely-visited stop for tour groups, and a quiet retreat, safe from the economic hardships of modern Germany. The Wittmers kept largely to themselves, but the Ritters and the Baroness soon disliked each other.

In 1934, an expedition to the islands turned up a strange set of circumstances. One of the Baroness’s lovers had moved in with the Wittmers after she’d spurned him but was now missing, Mr. Ritter turned up dead from apparent food poisoning or an aneurism – the cause was unclear, and The Baroness and her remaining lover were also missing.

Eventually, a small ship and its crew were discovered, dead from dehydration and mummified on the beach of a nearby island. One of the two men found was The Baroness’s former lover, the other was a local captain who frequently traveled between the islands, ferrying colonists about and making deliveries.

As for the Baroness, she’s still missing, along with her other lover.

What to Do When You Visit the Galapagos Islands

A tour bus slows for a tortoise in the Galapagos.

Heading to the Galapagos Islands sometime soon? Don’t worry. Turtle won’t be on the menu. Don’t get your hopes up about moving in, though – Ecuador’s government keeps firm control over who can settle here. The government of Ecuador is working hard to preserve the biodiversity of this fascinating place. Conservation groups and ecotourists are welcomed here year-round. The photography opportunities are stunning, and the scenery is unbeatable.

You may not find pirate treasure, but a quick trip to Post Office Bay might tell you something about how they got their mail. Look carefully to spot baby iguanas, penguins, and a vast assortment of wildlife. Turn towards the ocean to imagine the history. And while you’re there, be careful not to trip over any undiscovered treasure. Oh, and if you happen upon The Baroness, tell her I’d love to cover her story.

*I would never eat a turtle. Just sayin’…

Corrections: A special thanks to Alicia Rudnicki, who pointed out that the Galapagos Islands are currently inhabited. The article originally listed them as uninhabited.

I'm a fan of honest words, clarity, and impact. A writer, editor, and translator, I spend my days guzzling coffee like a champ, living the expat dream, and being mom to world's sweetest preschooler. I’m co-owner and copywriting head at Rusmexus Writers, a history buff, and have a background in international relations.
0 POST COMMENT
NEXT ARTICLE
Hilton Head Island: A top vacation destination with a fascinating past
August 24, 2015 - 2:58 pm
PREVIOUS ARTICLE
Visiting Chernobyl and Pripyat: A Trip For the Brave
August 6, 2015 - 6:05 pm