/ Attractions / Visiting Chernobyl and Pripyat: A Trip For the Brave 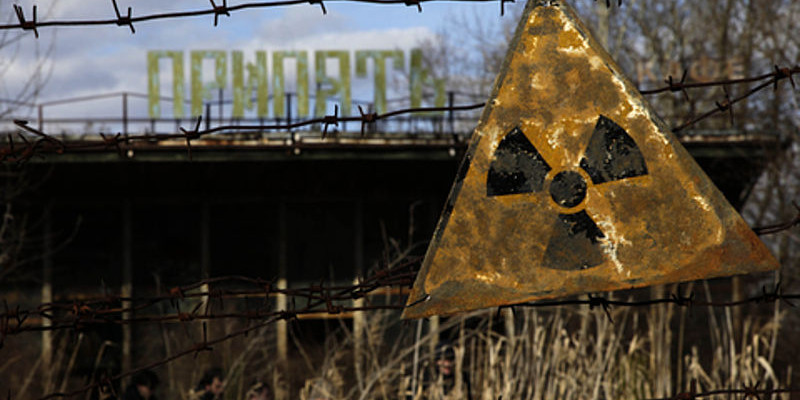 Tucked in the countryside near Kiev, a beautiful ghost town stands preserved, a monument to the risks of nuclear power. Chernobyl is more than the site of one of the world’s largest nuclear tragedies. It’s a place where people made the ultimate sacrifice and nature found ways to overcome a nightmare – even in the most unlikely setting.

I’ll admit, it’s never been my first choice for tourist destinations, but after taking a look at the history and the current natural wonder, I’m starting to rethink that perspective. Maybe Chernobyl deserves a spot on your bucket list. It’s quickly winning a place in the hearts of photographers, botanists, and travelers of all types. 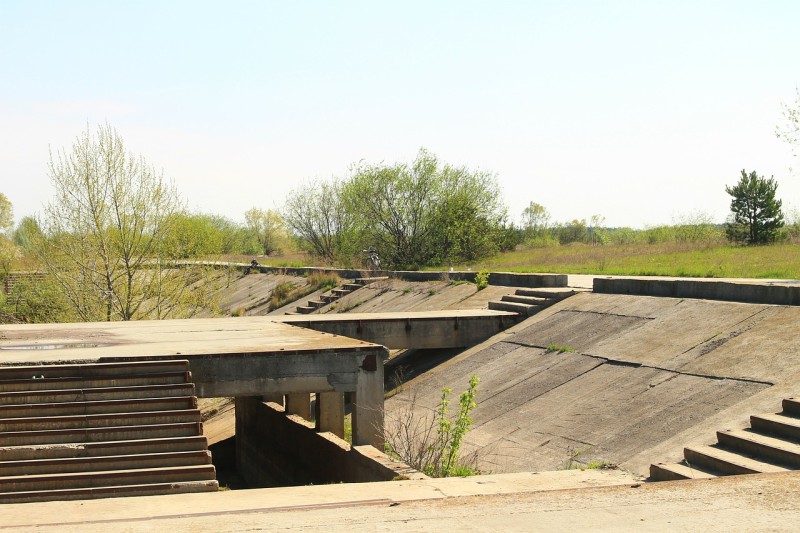 Abandoned structures like this one dot the landscape in Ukraine’s Exclusion Zone.

The race to be the most advanced nation drove the United States and the USSR to occasionally take dangerous shortcuts or hide the truth from the public. One of the most dangerous little white lies told during this era was that nuclear power in the Soviet Union was accident-free, safe, and easy to control. In reality, prior to Chernobyl 14 accidents had taken place – but none so dangerous. In Chernobyl, as in the other accidents, the reason nuclear power was a problem had everything to do with design. The graphite-tipped boron control rods allowed dangerous power surges to take place. One of those surges was too much for the system, and BOOM. Reactor No. 4 went bye-bye.

A false sense of security surrounded Chernobyl, and was designed into hardware itself. The Geiger counters could only reach 3.6, a safe reading for radiation, even when the real levels reached 15,000 (which they did after the accident).

On April 26, 1986, the reactor started to fail. Alexander Akimov and Leonid Tuptunov died from radiation poisoning after spending hours waist-deep in radioactive water, looking for a way to keep the reactor running smoothly. Soon, firefighters arrived on the scene, and battled flames that were escaping the turbine hall. They suffered from nausea, vomiting, and coughing, and many fainted. By this point, all myths of safety were gone. The top of the reactor had blown off and 2,500 tons of radioactive carbon was burning uncontrollably above a flooded chamber. 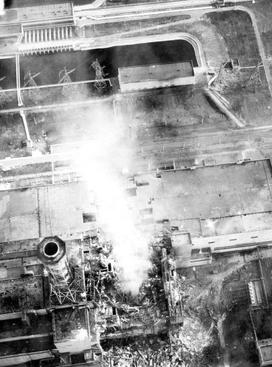 Aerial view of the damaged core. Photo via Wikipedia.

According to an article in The Scotsman, “The damaged reactor was sinking and burning through its strengthened floor and was in danger of collapsing into rooms flooded with water. This would trigger a nuclear explosion that, so Soviet physicists calculated, would vaporise the fuel in the three other reactors, level 200 square kilometres, destroy Kiev, contaminate the water supply used by 30 million people and render northern Ukraine uninhabitable for more than a century.”

Heroes were needed. Alexei Ananenko, Boris Baranov, and Valeri Bezpalov stepped forward to perform what the world knew was a suicide mission. Decked out in scuba gear, the trio made their way into the flooded chamber and opened the valves to let the radioactive water escape and prevent a thermonuclear explosion. By the time they left the reactor, all three were sick with severe radiation poisoning. They died shortly afterwards. These three heroes – two soldiers and an engineer – made the ultimate sacrifice. They saved Kiev, and most of Europe, from nuclear disaster. Final analysis of the accident reported that 237 people suffered from acute radiation sickness (ARS), of whom 31 died within the first three months. 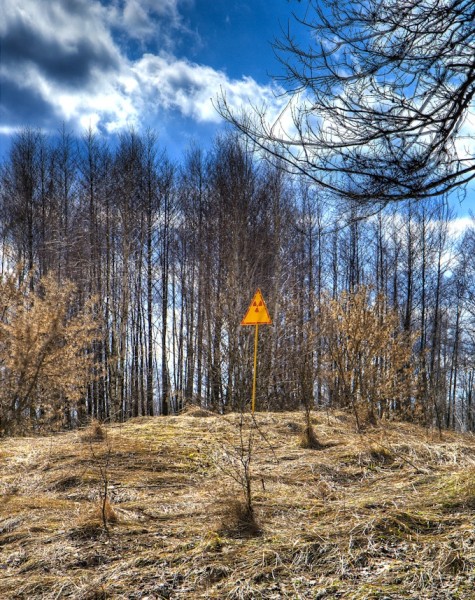 This photo, taken by Timm Suess on Flickr, shows an area of pine forest that died immediately after the Chernobyl disaster and turned reddish brown. Today, this section of forest is alive and thriving again.

After the reactor blew, the town of Pripyat and the surrounding area were viewed as dead zones. Scientists guessed that life would be slow to return, the area would be a biological wasteland, and it would be unsafe to inhabit for up to 20,000 years. Of course, Reactor No. 4’s destruction didn’t keep the rest of the plant from functioning. In fact, according to the U.S. Nuclear Regulatory Commission, Chernobyl still actively provided power to much of Ukraine until 2009, when the last reactor was shut down as a condition for joining the European Union.

The wildlife in the area is impressive. Although biologists report lower return rates for barn swallows that migrate from this region, there are hares living in the area around the damaged reactor and birds have built their nests throughout the Exclusion Zone. While wildlife biologists marvel at nature’s way of adapting to the nuclear disaster, epidemiologists have made an equally exciting discovery – solid cancers, leukemias, and other expected outcomes are lower than anticipated. The people who were exposed to radiation from Chernobyl show increased rates of thyroid cancer, but few other types. Still, millions of people were affected by the radiation.

There are grim reminders of the disaster, however. Hunters in Germany face the challenge of finding boar that aren’t radioactive, and mushroom harvesting, once a common pastime in many parts of Eastern Europe, now requires extra care – mushrooms appear to feast on the radiation, making them a dangerous meal for unsuspecting harvesters. Some species of mushroom adapted to the extreme conditions and now thrive on the radiation in the zone.

Other animals found in the zone include foxes, lynx, eagle owls, wild horses, and hares. A patch of pine forest that once appeared dead is now growing in vibrant shades of green, and there are trees and wildflowers across the zone.

Pripyat, the city where plant workers lived, is a haunting place. Abandoned in haste, it’s a walkable museum of the Soviet Union in the 1980s. And yes, it’s open for tourists. Wildflowers bloom around the sign that welcomes visitors to Pripyat. The town looks new and inviting from a distance, but up close you can see how the trees, shrubs, and grasses are taking over the buildings in the area.

Founded in 1970, Pripyat was still growing when it was evacuated. The town’s amusement park was set to open on May 1st, 1986, but evacuation came first. A carnival swing sits rusting into ruin, and bumper cars are abandoned, some overturned, but somehow they seem inviting and cheerful. Brightly painted murals are gradually chipping away as years pass, and the town Ferris wheel stands waiting for an opening day that will never come.

What is least expected in Pripyat is also what is most prevalent. Hope. Despite the derelict and crumbling appearance of old school rooms, one with a floor covered in gas masks, and the daunting structure being built to contain Reactor No. 4, the vibrant colors and plentiful wildlife make this a fascinating place to visit. 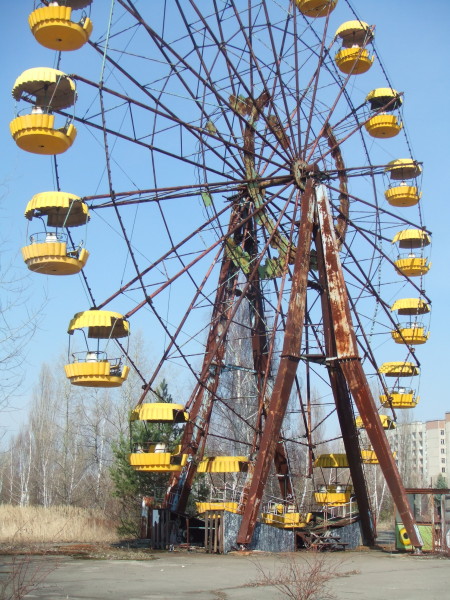 The Pripyat Ferris wheel is a favorite subject for photographers who visit the Exclusion Zone.

And don’t expect the Exclusion Zone to be truly empty of people. You’ll find graffiti in the city of Pripyat. It’s no surprise, as more than 200 people are known to still inhabit the area. St. Elijah’s church welcomes local devotees, and visitors to the Exclusion Zone often bring tokens to the people who live here.

The enchanting beauty and captivating history of Chernobyl are quickly earning Pripyat and the power plant itself a reputation as tourist attractions. More than 10,000 visitors entered the Exclusion Zone last year, passed through multiple security checkpoints, and signed waivers releasing tour operators and Ukraine from responsibility in case the develop cancer or other radiation-related illnesses.

They can’t touch anything inside or even sit on the ground, and can only eat food and drink they’ve brought in with them. The brave choose to stay overnight, and a few old hotels exist for tourists and workers. The government doesn’t plan to allow more to be built, however.

One of the most popular ‘dark tourism’ spots on the globe, Chernobyl and Pripyat are also bright symbols of sacrifice, hope, and adaptation.  For a ghost zone, this destination is surprisingly alive.

What Not to Forget on Your Trip Around the World

I'm a fan of honest words, clarity, and impact. A writer, editor, and translator, I spend my days guzzling coffee like a champ, living the expat dream, and being mom to world's sweetest preschooler. I’m co-owner and copywriting head at Rusmexus Writers, a history buff, and have a background in international relations.
0 POST COMMENT
NEXT ARTICLE
Galapagos: The bizarre history of a Pacific island chain
August 12, 2015 - 2:04 pm
PREVIOUS ARTICLE
The Biggest Empire You Never Knew Existed
August 2, 2015 - 1:02 pm