Chances are, you’ve heard of Silicon Valley. The city at the start of the tech revolution that swept the US in the 1990s, and continues today, is Palo Alto. It’s also home to Stanford University, a school that educates tomorrow’s tech geniuses.

But there is more to Palo Alto than computers and education…the city’s history is full of intrigue, war, and cultural clashes, not to mention growth, development, and green spaces.

In the late 1700s, California was part of Mexico. Palo Alto, marked by a tall tree named El Palo Alto and the San Francisquito Creek. The site of Palo Alto was chosen for its promise as a settlement by Leland Stanford. Shortly after, landowners began to arrive. These Spanish and Mexican settlers weren’t the first peoples to inhabit the area, however – the Ohlone peoples had lived in the area for generations, and a modern historical site commemorates their presence in the area, as well as the existence of numerous mounds built by this tribe.

Eventually, the Treaty of Guadalupe Hidalgo made California change hands and became a part of the United States in record time – having never even been a territory. Pioneers and wealthy families bought land grants in the area, and in 1855 formed the township of Mayfield. The history of the modern Palo Alto community is closely connected to that of the Stanford family and University. Leland Stanford purchased significant land grants in the area beginning in 1876. He added a train stop to the town, and contemplated building his university in Mayfield, but the town rejected his requirement that Mayfield become an alcohol-free settlement. As a result, Stanford went on to build his town adjacent to what was then Mayfield (and is now South Palo Alto), as well as Stanford University.

University Ave circa 1894. Photo via wikipedia.

Stanford’s settlement quickly grew to the size of Mayfield, and eventually overtook it. By mid-1925, Palo Alto annexed Mayfield, creating a town with two downtown areas – a unique and captivating feature of modern Palo Alto to this day.

This is one of California’s most beautiful natural areas, and the community itself is a delight to walk through on a nice day. More affordable than most places in the South Bay, and inherently friendly, you’ll find more to do here than you’d expect from a small city.

Before you step one foot into Palo Alto, visit El Palo Alto, the tree that gave the city its name and Stanford University its logo. El Palo Alto is over 1,000 years old, significantly taller than the surrounding trees, and still growing strong. Spanish explorers camped at its base in the mid-late 1700s. The tree’s health has faltered over the past 100 years as a result of pollution, and a significant portion of its top was removed to help keep it healthy. Although only 68% of its previous height, El Palo Alto is still a magnificent redwood. The tree is expected to live another 300 years, and is considered one of California’s most important historic landmarks.

El Palo Alto. The tree that gives the city its name. Photo via wikipedia.

I told you how Stanford came to be – the brainchild of Leland Stanford. What I didn’t mention was why. The Stanford family built the university to honor their son, who died of typhoid fever at a young age. What they created soon became one of the most influential universities in the United States, where studies of everything from earthquakes to business and computers changed the country permanently. Famous graduates of Stanford include Herbert Hoover, John F. Kennedy, John Steinbeck, Tiger Woods, Sally Ride and whole lot more. 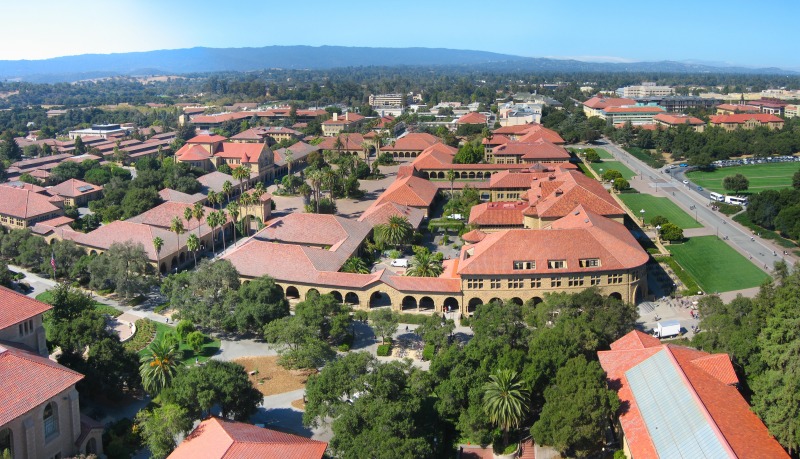 Built by President Herbert Hoover, and based on his wife’s design, the home is a recognized historic site and a part of the Stanford University campus. Don’t expect to go inside, however. The impressive architecture is currently used as housing for university professors. The home bears resemblance to North Algerian and early International home styles, but is truly unique in its form and character. Don’t miss a walk past the property – like much of Stanford’s campus, it’s worth the trip.

Another famous home on Stanford’s campus is this Frank Lloyd Wright masterpiece. Built by Wright for Stanford University professors Paul and Jean Hanna, the home as no right angles in its design. Based on hexagonal forms, it marked a significant turning point in Wright’s artistic career, and was one of his first works for middle class Americans. The Hannas donated the house to Stanford in 1975, and it subsequently housed four university provosts before the 1989 Loma Prieta earthquake, which caused significant damage to the building. After a complex restoration, it was opened to the public in 1999.

If you’d love the chance to look down on the Palo Alto area, take the tour to the top of the Hoover Tower. Inside, you’ll find 48 bells from Tournai, Blegium; the largest of which bears the inscription “For peace alone do I ring.” On clear days, you’ll see much farther than Palo Alto, out into the San Francisco Bay, and the guides will gladly point out recognizable landmarks to you. The Herbert Hoover Memorial Pavilion is adjacent to the tower, and you’ll find exhibits on both President Hoover and his wife, Lou Henry, in the lobby of the tower itself.

Are you a computer geek? Come on, admit it – these days, tech is a part of everyone’s life. This humble garage is where much of modern technology can trace its roots to, although it looks more like a place you’d see a band practicing. Built in 1905, the first floor once was the rented home of David and Lucile Packard, while the shed in the backyard was Bill Hewlett’s home. The garage was their workshop, and what many now see as the “birthplace of Silicon Valley.” Today, the house, garage, and shed are closed to the public, but have been restored with period furniture and décor. It’s a perfect tech-lover’s stop on a day trip to Palo Alto. 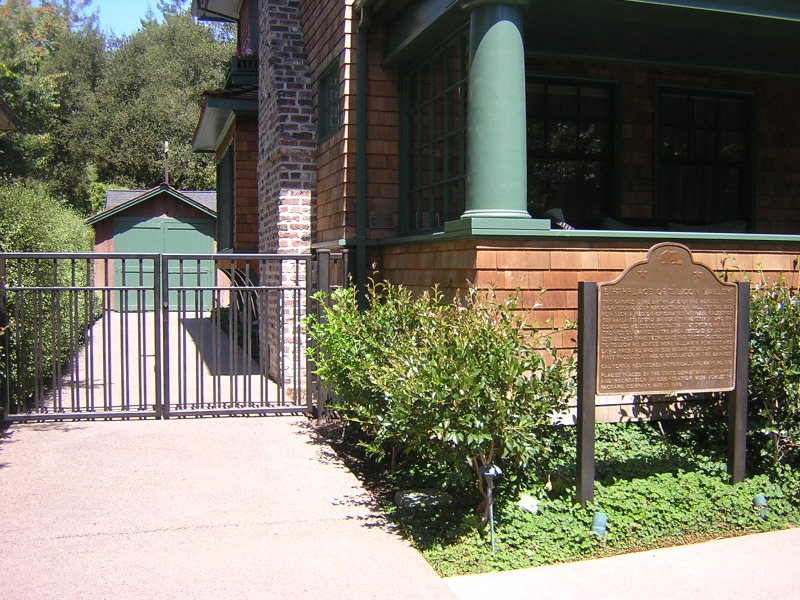 The garage startup that started Hewlett Packard. Photo via wikipedia.

For decades, this movie theater was the premier place to watch a movie in Palo Alto. Built in 1925, it operated continuously for decades before it was bought by the David and Lucile Packard Foundation. Now restored to its original glory, the movie house is operated by the Stanford Theatre Foundation and shows classic Hollywood movies. From Fred Astaire to Casablanca, old Hollywood is alive in this landmark. Movies are accompanied by the sound of a traditional pipe organ prior to 7:30 showings, and silent films also feature accompaniment by the Wurlitzer. Inside of the theater, the décor is truly glamourous. Don’t miss it!

Where to Eat on Your Trip to Palo Alto, CA

Palo Alto is a small city, and the dining choices are limited. That doesn’t mean you should skip them – from seafood to Italian, Palo Alto offers some of the best food in the South Bay. Two of my favorites are below…

This delightfully decorated 1950s-esque diner offers a filling meal for a good price, with creative flavor combinations and phenomenal milkshakes. Go hungry, leave stuffed. Just beware that the price can be a little steep if you don’t watch what you order. Rumor has it that the menu has changed recently, so I can’t vouch for the food. I will say, however, that the key lime pie is the best on Earth. Eat it. Give it as a gift. Mail it to me. Enjoy.

Looking for high-end Greek? This is the place for you. For an appetizer, order Kolokithokeftethes – fried zucchini with a phenomenal mint cucumber sauce. Try the lamb chops for an entrée, and if you’re there for a special occasion, mention it. They give a free dessert that you’ll go crazy for…I won’t give details, but I will say that it’s unbeatable.

For more information on a trip to Palo Alto visit Destination Palo Alto. 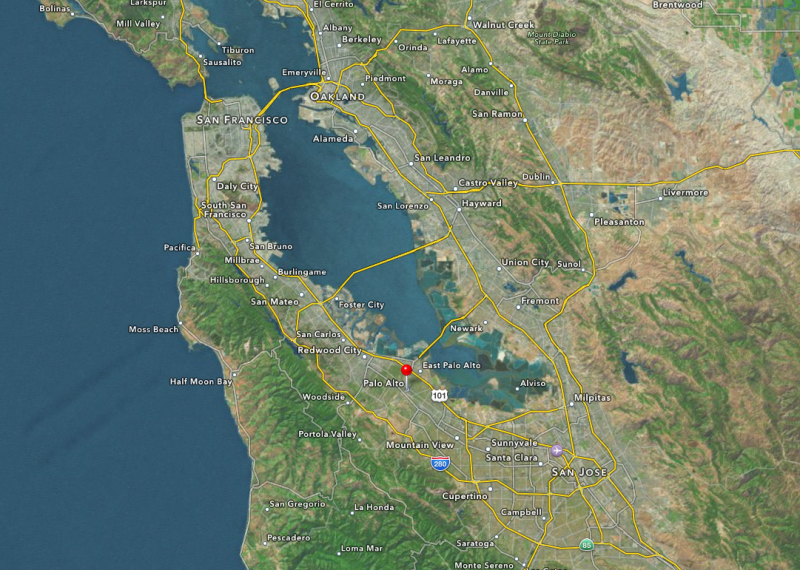 I'm a fan of honest words, clarity, and impact. A writer, editor, and translator, I spend my days guzzling coffee like a champ, living the expat dream, and being mom to world's sweetest preschooler. I’m co-owner and copywriting head at Rusmexus Writers, a history buff, and have a background in international relations.
0 POST COMMENT
NEXT ARTICLE
Behind The Scenes Video - Travel Thru History
December 30, 2014 - 9:32 pm
PREVIOUS ARTICLE
"Imitation Game" History - How Mathematician Alan Turing Helped Saved the World.
December 24, 2014 - 2:41 pm