We’ve changed our planet in some bizarre ways. One of the most obvious is where our furry friends are living around the globe. On ships, planes, and even wagon trains, our ancestors transported animals around by accident and on purpose. The most common include cats, rats, pigs, goats, and birds, but there are some shocking ones on this list, too. You won’t believe what turned up in Ireland.

Feral Horses in the United States

From Colorado to North Carolina, there are plenty of spots in the U.S. where wild horses roam free. Descendants of horses brought by Spanish conquistadors and later European colonists, these four-legged beauties are often called “mustangs” and are protected by legislation in some areas while considered a nuisance in others. 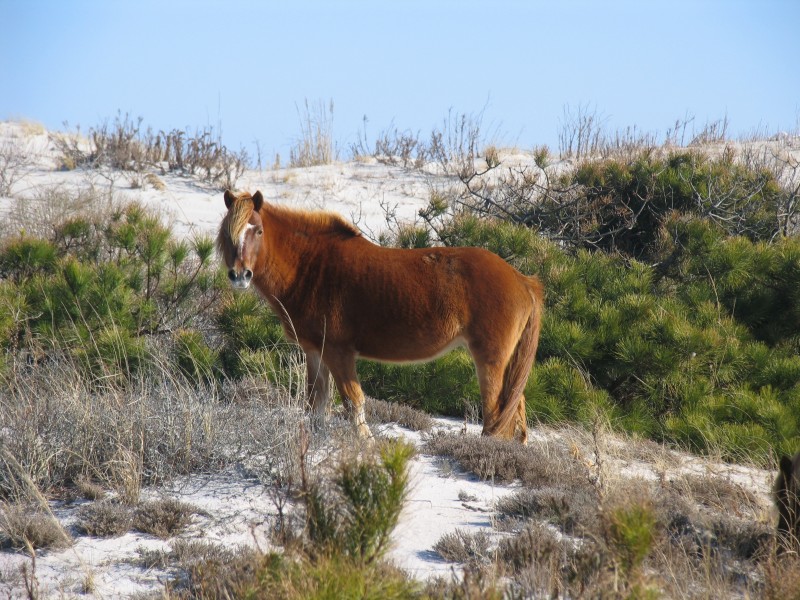 A wild horse on Assateague Island

Brought by Norwegian sailors as sport hunting game and a food source, the reindeer outlasted the whaling industry that brought the sailors to the island. There were so many that the reindeer split into two large herds and programs to eradicate them from the island have been set up.

Lumber is a huge industry in New Zealand, where coveted North American pine trees flourish. They were brought to the island nation to help boost the logging industry. The forests are growing beautifully and the industry is strong, but the trees have some unexpected inhabitants that bug the locals, however, including red and fallow deer that were introduced in the 1850s and 60s as game. 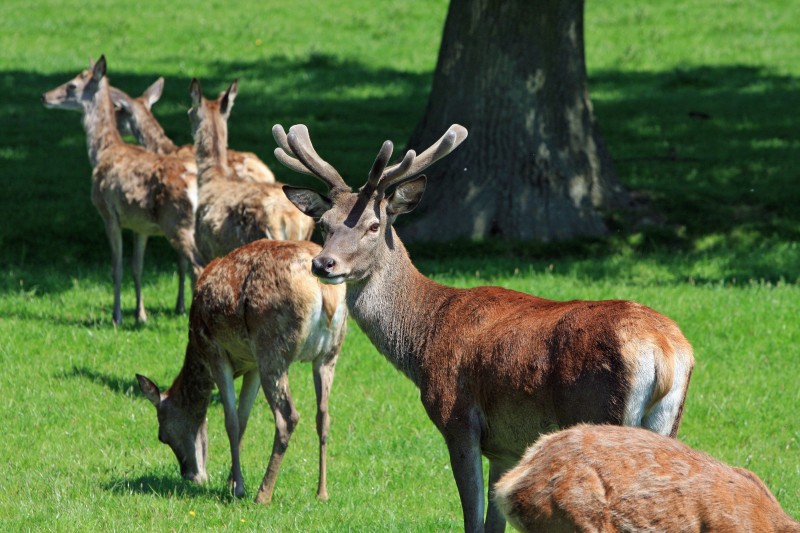 Pigs, Goats, and Cats in the Galapagos Islands

The Galapagos Islands are home to many non-native species, some of which have wreaked real havoc on the islands. Pigs and goats were introduced as food sources and cats were brought to the islands to kill rats and other small pests, but all three have prospered to the point of endangering local species. There are extermination programs in place to get rid of them.

Kitty’s been eating the local lizards in the Galapagos.

Swimming Pigs in the Bahamas

Pigs and islands are a fairly common combo. Humans like pork and brought their bacon-source with them on trips around the globe. One special group of feral piggies has a unique talent – although no one knows how they showed up in the first place, the wild pigs of Exuma archipelago in the Bahamas have learned to swim. It gets them to the tourist boats they know are bringing treats. 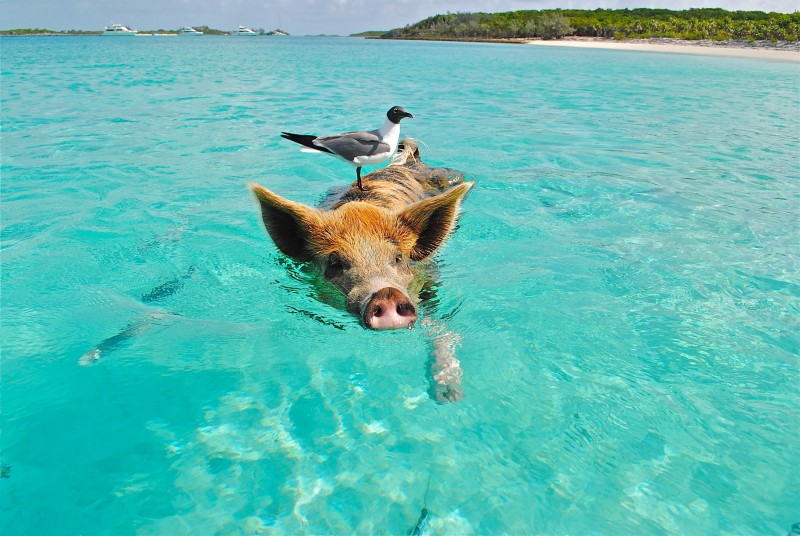 When you think wallabies and kangaroos, you probably think Australia, not the Emerald Isle. On Lambay Island, just a few miles off the Irish coast, the wealthy Barings family are the exclusive property owners. A penchant for exotic pets led them to introduce several species to the island in the 1950s and 60s, but only wallabies survived. In fact, they thrived so well that in the 1980s, Dublin Zoo asked the Barings if they could release a few extra wallabies from the zoo’s population on to the island. Today, the little red neck wallabies are quite at home on the tiny island. 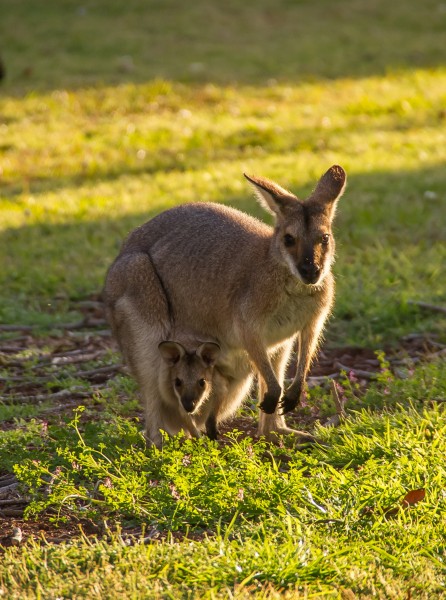 Not the local wildlife you’d expect in most of Ireland.

During Australia’s colonization, the Brits brought camels from Afghanistan and India to help with construction. Once they were no longer needed, the camels were released. Today, Australia has the world’s largest feral camel herd and they aren’t necessarily welcomed. In fact, they’re kind of a pain according to the locals. 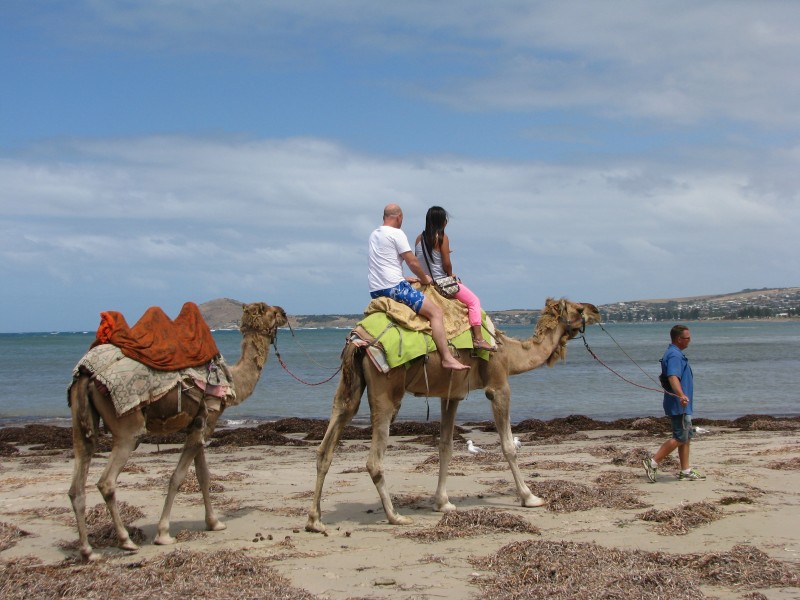 At least some of Australia’s camels are gainfully employed.

In Texas, zebras have taken over along with ibex, Himalayan tahr, and a host of other exotic wild game. Left on their own throughout the year, the animals were brought for sport hunting and are now residents of multiple rural ranches, covering an area of more than 100,000 acres. They aren’t tame and they aren’t tended – they roam wild on the vast properties, although they are fenced in. 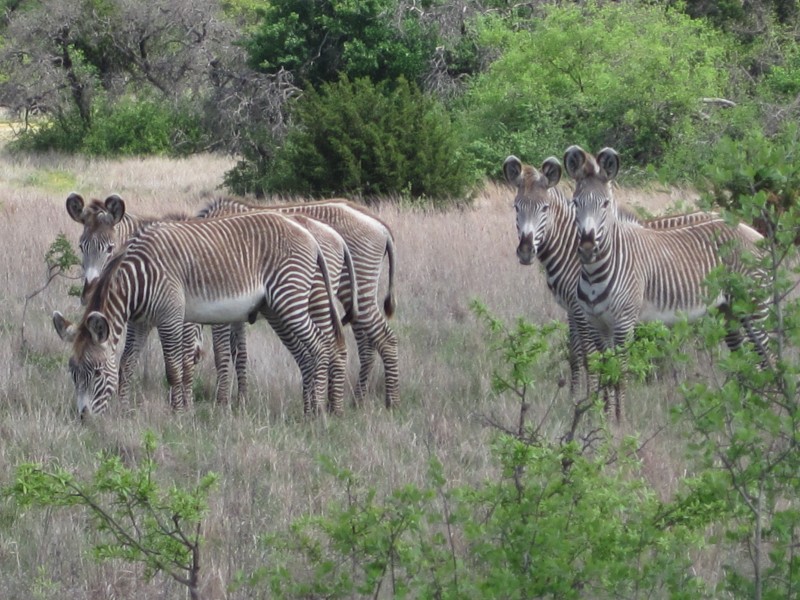 The prized pets of drug lord Pablo Escobar, Colombia’s hippos escaped when the cartel kingpin couldn’t hide from the law anymore. Today, you’ll find roughly 60 hippos roaming the area around Escobar’s old property – a problem not even the Colombian government know what to do about. The population is increasing, too. Roughly 6 hippos are added each year to the herd. 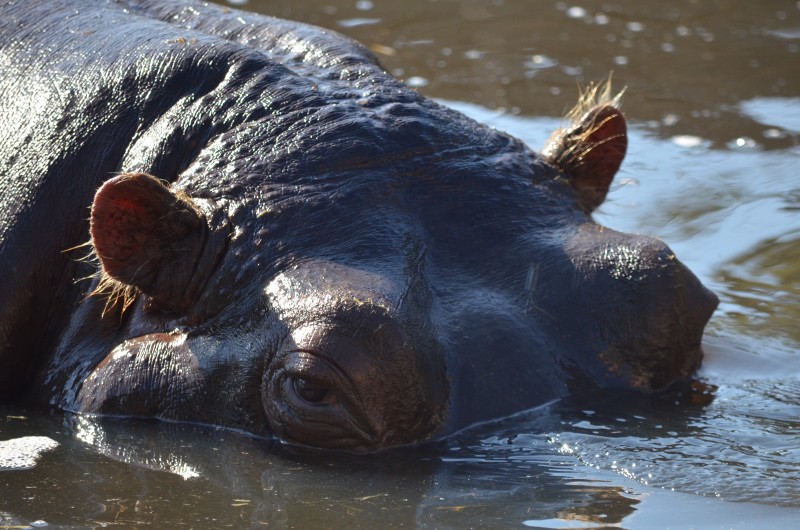 Pablo Escobar had a thing for hippos.

In San Francisco, a popular wild-caught pet has become a favorite resident of Telegraph Hill. Cherry-headed conure parrots were brought (often illegally) from South America to the U.S. and a large flock is thriving at this popular landmark. A female mitred conure interbred with the flock for a while and has a few grandkids flying around in the flock, too. 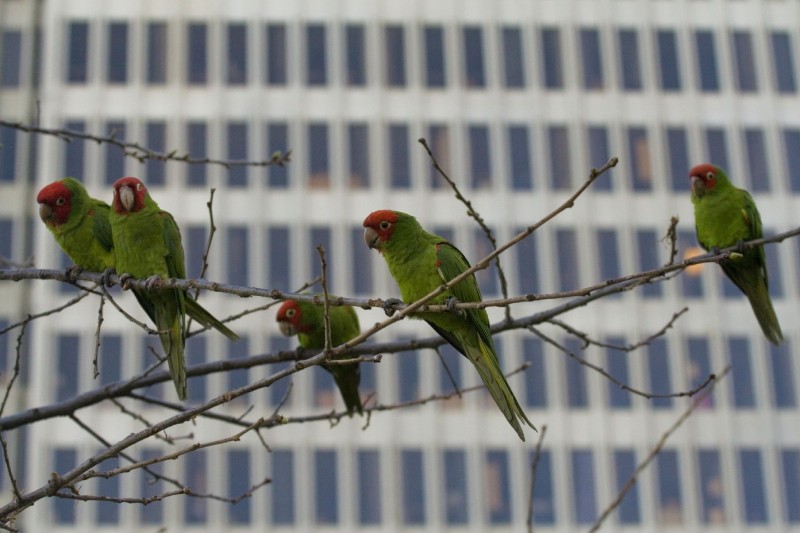 No one knows exactly how they got here, but the Silver River in Florida is home to a large Asian rhesus macaque population. These cute little monkeys are a load of trouble for local fish and wildlife officials, and love to woo tourists with their antics. Once thought to be surviving on handouts, researchers now know that the macaques are actually living largely off local food sources like the ash tree. Their impact on the ecology isn’t understood yet, though. 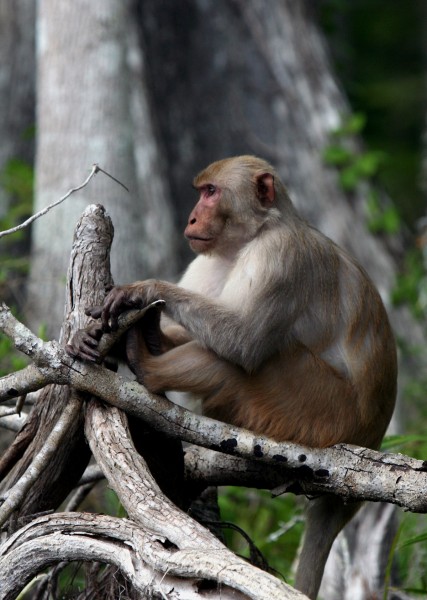 A feral macaque in Florida.

There are plenty of river shark species, but lake sharks? Only in Australia. Carried from rivers into land-locked water bodies during floods, bull sharks have thrived in some of Australia’s lakes, including one man-made spot that shocked the locals – a golf course in Brisbane. 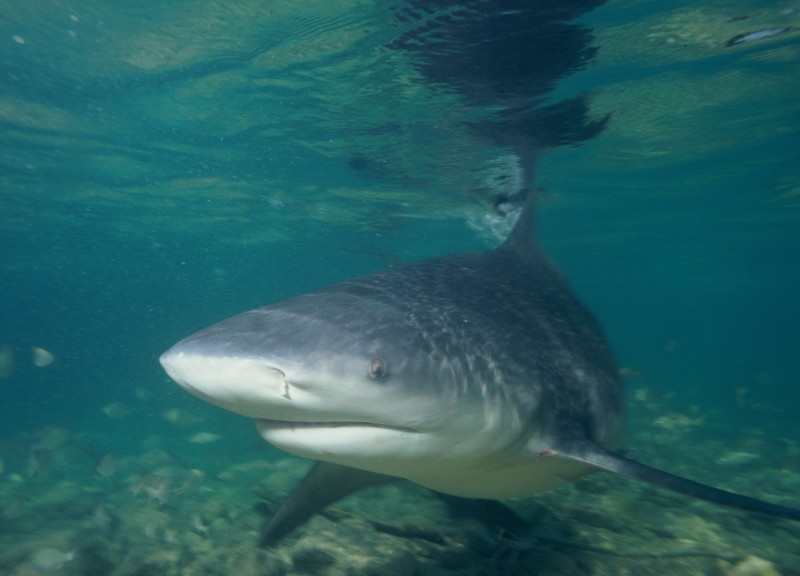 Imagine this guy in your golf course’s pond.

Big bird appetites and a diminishing public demand for emu meat inspired many Texas farmers to release their emus into the wild. That’s a problem for local cattle and authorities – the birds run at an impressive 30 mph and are capable of damaging fences, spooking cattle, and causing major car accidents. They’re big but not bright, and thanks to the havoc they can wreak, at least one Texas county has an official emu wrangler on staff. 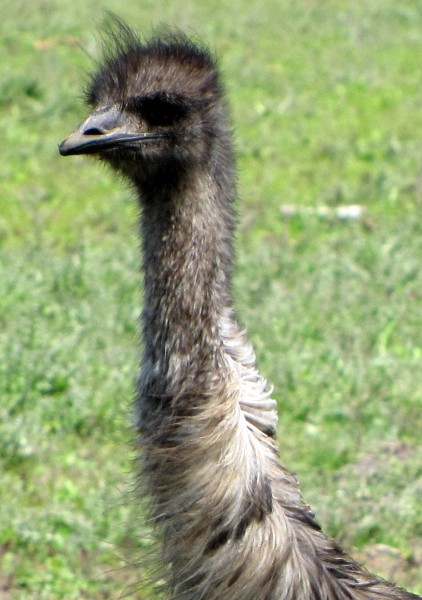 I’m arachnophobic so the idea of giant, hair-spitting, poisonous arachnids on the loose in England is a bit intimidating and all too real. At least two were discovered roaming free in Bolton, roughly 2 miles away from each other. They’re a popular collector’s pick, but no one knows exactly how these monsters escaped. England just became a nope. Well, at least Bolton did… 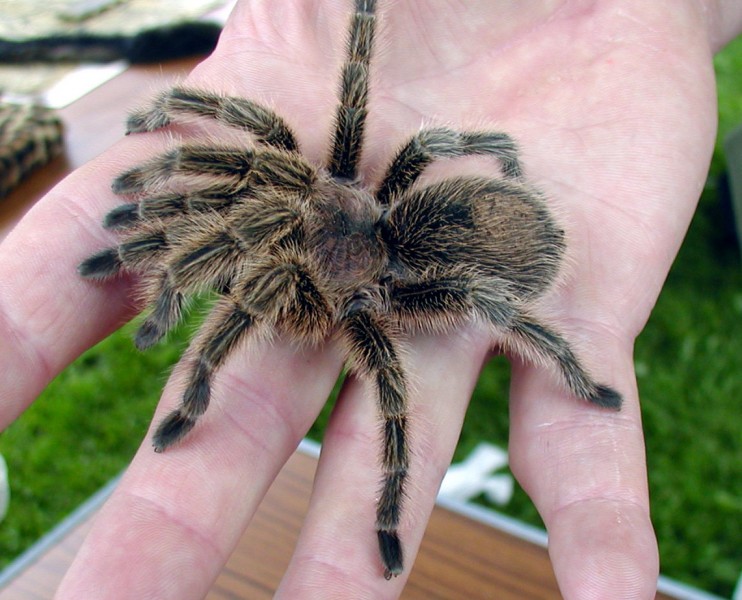 One heck of a mega NOPE. I don’t want to meet this furry critter. Not now, not ever.

An Island Overrun by Rabbits in Japan

Intentionally released onto an island that was once used for chemical weapons testing and creation, bunnies are a big tourist attraction. In Japan, people travel to bunny island to spend time with the cute critters, but rabbits breed like…rabbits. They’re everywhere. 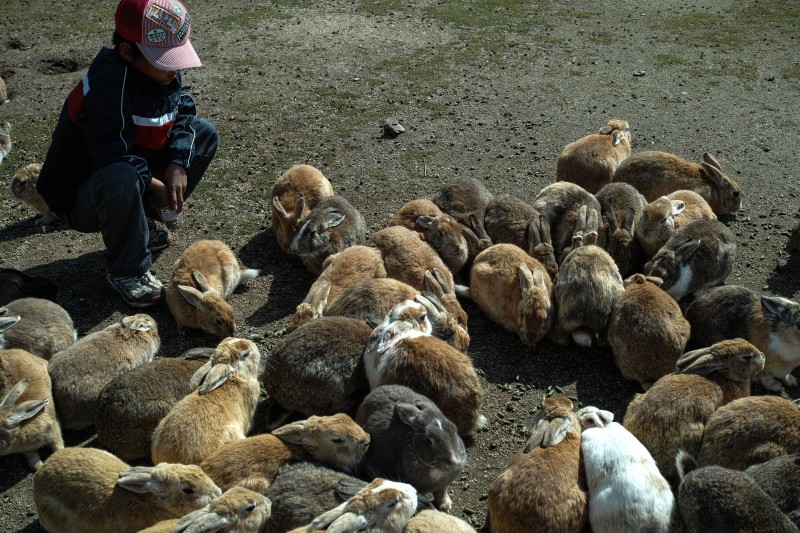 Thanks to local traditions that claim feeding stray cats will bring good luck and good fortune, there’s one island in Japan with a massive population of the furry critters. The cats first arrived as pest control to protect silkworms during the island’s silk trade boom, but today it’s a tiny fishing and tourist destination and the kitties remain. There’s also a cat shrine on the island.

More than 83% of the island’s population is elderly, so the stereotype of old cat ladies might just be true here…

I'm a fan of honest words, clarity, and impact. A writer, editor, and translator, I spend my days guzzling coffee like a champ, living the expat dream, and being mom to world's sweetest preschooler. I’m co-owner and copywriting head at Rusmexus Writers, a history buff, and have a background in international relations.
0 POST COMMENT
NEXT ARTICLE
Robert Smalls: From slave to congressman
June 6, 2016 - 4:26 pm
PREVIOUS ARTICLE
Chrome Dome: Nothing says we’re pals like a nuclear bomb
May 14, 2016 - 9:28 pm