/ Attractions / The Nashville Parthenon – The Athens of the South – Episode 109

On our trip to Nashville we discovered something that you would not expect to find in the middle of Tennessee, the Parthenon. Turns out, Nashville has a full scale replica of the Parthenon, originally found at the Acropolis in Athens, Greece. It looks spectacular, and the Nashville Parthenon is a must see if you are traveling through “Music City.”

Why is there a Parthenon in Nashville?

First and foremost, why is this thing here? Originally constructed in wood, it was built as a temporary structure in 1897 as part of the Tennessee Centennial Exposition, a city sponsored shin-dig. Nashville’s moniker “The Athens of the South” inspired the theme for the show. It’s important to know that this is a replica. The original Parthenon is in ruins, and is built with marble. Nashville’s version was redone in concrete.

The pediment atop the Parthenon tells the myth of Athena. That’s where it gets crazy, because inside – staying true to the original – they built a 42 foot tall statue of Athena covered in gold leaf. In her hand, she holds a six foot tall statue of the goddess Nike. It really is a site to see. 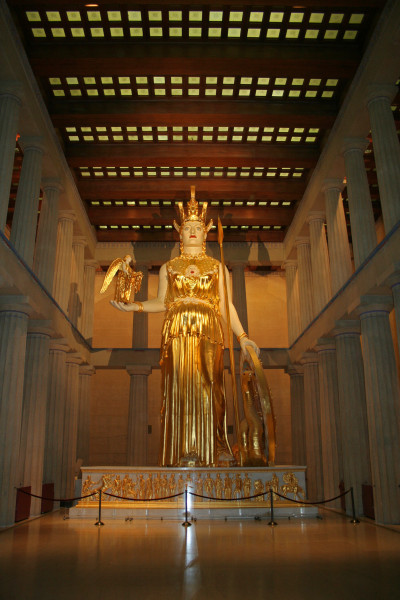 Inside the Parthenon is an art museum featuring works from American artist, Winslow Homer.

You’ll find the citizens of Nashville casually strolling the grounds of Centennial Park, picnicking and bike riding. Take my advice and spend a couple hours in the park, and don’t forget to see the gigantic structure in the middle of it.

For more information on a trip to Nashville to see the Parthenon head to www.visitmusiccity.com

Co-creator of the Travel Thru History television series. Executive Producer at Infrared Creative.
0 POST COMMENT
NEXT ARTICLE
Why Did These Ladies Want to Kill President Gerald Ford?
June 3, 2014 - 7:22 pm
PREVIOUS ARTICLE
Joining the fight with Battleship North Carolina in Wilmington, NC
May 21, 2014 - 3:04 pm