Key West’s balmy climate, historic structures and anything-goes ambiance have long provided a refuge for writers, artists and free spirits seeking a place to soothe and satisfy the mind, body and soul.
Ernest Hemingway, Tennessee Williams, Elizabeth Bishop, Robert Frost and Jimmy Buffett are just a few of the famous who discovered solace and inspiration in the island city. So too did Bahamian wreckers, commercial fishermen, spongers and Cuban cigar makers.
Residents and visitors to the island actively participate in sightseeing, outdoor and maritime activities, and shopping by day, and then become part of the sunset celebration held each evening at Mallory Square, when tightrope walkers, jugglers and animal acts strive to top a more captivating performer — the fiery sun settling into the Gulf of Mexico.
Key West also can be reached by flying into Miami International Airport and driving from the mainland down the Overseas Highway — designated an All-American Road under the National Scenic Byways program — or by ferry from points on Florida’s west coast. 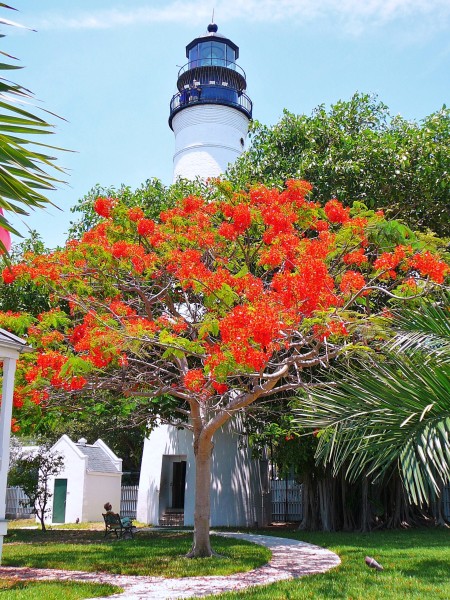 Things to see and do in Key West

This restored historic home contains original Audubon engravings commemorating the artist and ornithologist’s 1832 visit to Key West, when he sketched 18 new species for his “Birds of America” folio.

This historic military fort is filled with unique artifacts and memorabilia including Robert the Haunted Doll, along with the works of renowned local artists Mario Sanchez and Stanley Papio.

The late author’s home and second-story writing studio offer a glimpse into American literary history. While living here, Hemingway wrote some of his most notable works including “To Have and Have Not,” which is set in Key West.

This Civil War–era fort is the largest masonry structure in the Western Hemisphere. Its most famous prisoner was Dr. Samuel Mudd, incarcerated for providing medical assistance to President Abraham Lincoln’s assassin. Fort Jefferson is accessible via the Dry Tortugas National Park Ferry and by seaplane.

Constructed between 1845 and 1866, the fort remained in Union hands throughout the Civil War and was later used during the Spanish-American War. The fort’s collection of Civil War–era seacoast cannons is the largest in America. The state park features a popular beach, picnic tables, snorkeling and fishing.

Look for creative headstones that read, “I Told You I Was Sick” and “Devoted Fan of Singer Julio Iglesias.” The cemetery also contains the resting place of Hemingway’s friend and fishing captain, “Sloppy Joe” Russell, and sparring partner Kermit “Shine” Forbes. Another plot pays homage to sailors killed in the explosion of the U.S.S. Maine.

Erected in 1847, the lighthouse guided mariners until it was decommissioned in 1969. Both the keeper’s quarters and the lighthouse have been restored. Visitors can walk 88 steps to the top for a wonderful view of the city.

This museum showcases the richest single collection of 17th-century maritime and shipwreck antiquities in the Western Hemisphere, including the treasure of the Nuestra Señora de Atocha.