Buena Park, California is an exciting city in Orange County. Buena Park is home to Knott's Berry Farm and the always tasty, Mrs. Knott's Chicken Dinner Restaurant. Buena Park is a great destination for families that want to spend their vacation riding high speed roller coasters, while soaking up the California sun.
Brandon Speakman on April 21, 2020 - 6:02 am in Featured Cities, Historical

Things to do in Buena Park, California

Buena Park, California is a quirky and interesting Orange County city. The city of Buena Park is filled with many family-friendly attractions and is a great area in Southern California, perfect for your next family vacation.

Early on, Buena Park consisted of large ranchos by land grants that The King of Spain had created. The King of Spain gave one of the land grants away to a Spanish explorer; Manuel Nieto of the Portolà expeditions. Manuel Nieto received his land grant in 1783. In 1834, Manuel Nieto split the land into five separate ranchos, so he could leave it as inheritance to his heirs. One of the land grants included Rancho Los Coyotes, which included the area California knows today as Buena Park. In 1822, the land was “transferred from Spanish authority to Mexican rule and then ceded to the United States in 1848,” after the Mexican-American War ended. Shortly after, California was granted statehood in 1850.

Once the transcontinental railroad was completed in 1869, more Americans started to move to Buena Park. In 1885, a wholesale grocer from Chicago, named James A. Whitaker, purchased 690 acres of the land. In 1887, Whitaker “founded the city of Buena Park in conjunction with the railway development of Orange County.” While it is unknown how exactly the city settled on the name Buena Park, there is a theory that James A. Whitaker got the name from the Chicago suburb; Buena Park, Chicago, Illinois. There is another theory that the name Buena Park came from the park like grounds that were once located at today’s intersection of Artesia and Beach Boulevard. The local settlers would refer to this area as “Plaza Buena,” which translates to English as “Good Park.”

The city of Buena Park was incorporated on January 27, 1953. Today, Buena Park has a local history park located on Beach Boulevard. Some of the “preserved historic buildings” in the history park include The Whitaker-Jaynes House (Buena Parks’ local history museum and possibly one of the oldest structure in the city,) The Stage Shop Hotel (home to the California Welcome Center-Orange County) and The Tice House. Buena Park, California is a fun city to explore, with plenty of family activities to take part in.

Knott’s Berry Farm started out as a roadside berry stand located alongside State Route 39 in California during the mid-1920s, which Walter Knott and his family operated. The Knott Family would sell berries, berry preserves and pies from the stand. After Mrs. Knott’s Chicken Dinner Restaurant opened in 1934, the area saw a increase in tourists and local visitors. This led to the Knott family building more shops and attractions, to entertain their guests while they waited to be seated inside Mrs. Knott’s Chicken Dinner Restaurant. 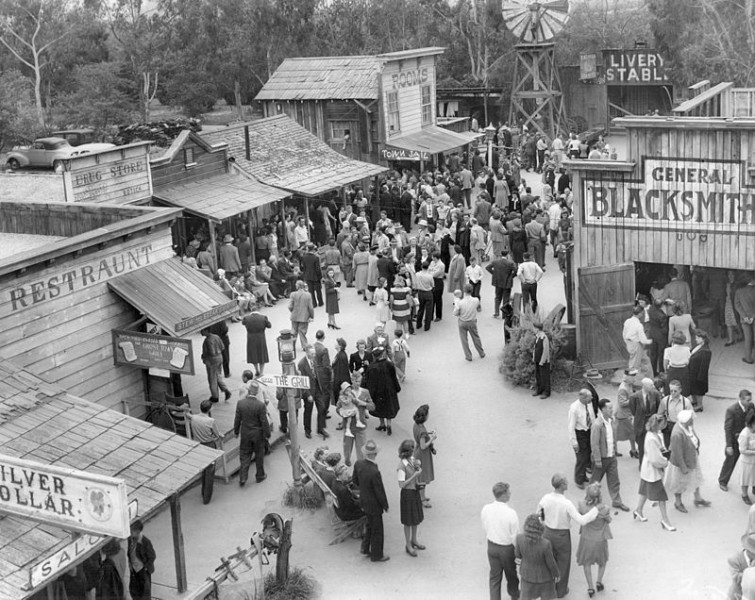 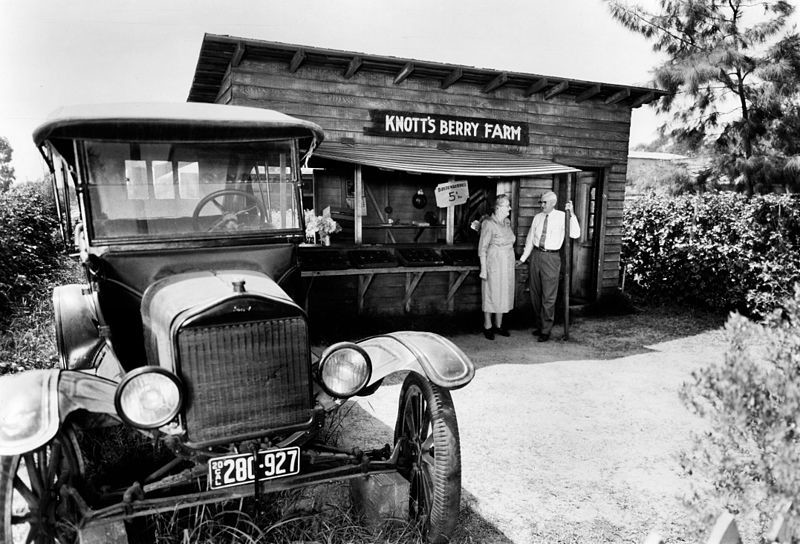 Walter and Cordelia Knott in front of their “original” berry stand, which was on display at Knott’s Berry Farm. Photo Courtesy Wikipedia 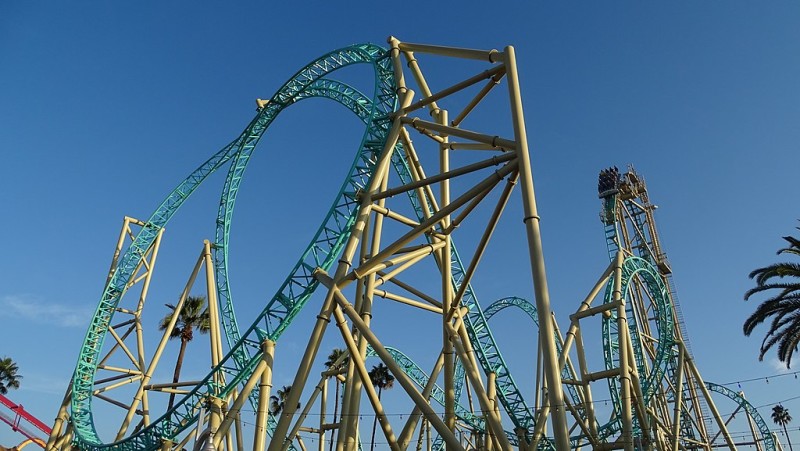 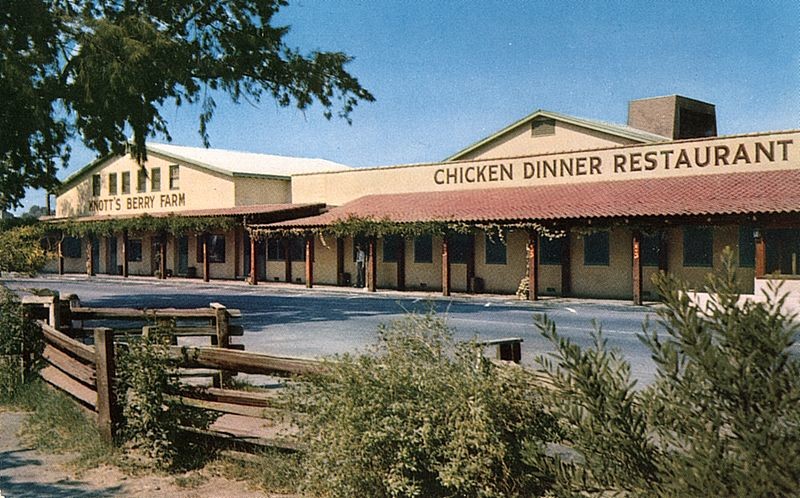 The interior design is a tribute to the restaurant that was established in the same location prior to the Chicken Dinner Restaurant, the Garden Dining Room. The restaurant also features another dining room, which resembles a barn. The barn dining area was “inspired by a western farmhouse.” Recently, Mrs. Knott’s Chicken Dinner Restaurant added an outdoor dining area that features stunning views of the California Marketplace fountain and the GhostRider roller coaster.

Connected to the Knott’s Berry Farm Hotel is the Amber Waves Restaurant and Bar, which “specializes in All-American Family Fare.” Amber Waves is proud to offer a buffet breakfast every morning, as well as a full service meal for breakfast, lunch and dinner throughout the day. Amber Waves is proud to offer “made to order burgers, handmade fresh pizza, pasta, New York steak and a selection of homemade desserts such as Boysenberry Pie a la mode and Warm Apple Bomb.” 2 customer favorites at Amber Waves include the Berry Farm Burger and the new Boysenberry Chicken Pizza, which features the Knott’s Berry Farm Boysenberry Chipotle BBQ Sauce. Amber Waves also has a full bar and full wine list. If you are lucky, you might catch Snoopy during your visit to Amber Waves, who makes appearances to the restaurant every day.

Medieval Times is a “family dinner theater” that features “staged medieval-style games, sword fighting, and jousting.” Medieval Times in Buena Park (the second location that was created) officially opened in 1986. Guests at Medieval Times are served a four-course meal that is timed with the on-going tournament. The meal includes garlic bread and tomato bisque soup, a half rotisserie chicken, sides of herb-roasted potato and buttered sweet corn, and a “castle dessert.” Medieval Times also offers vegan and allergy-friendly dining options. The tournament at Medieval Times includes 6 knights competing at different games that include; “catching rings on a lance, flag passing and javelin tossing.”

Ralph B. Clark Regional Park is shared by both the city of Buena Park and the city of Fullerton, California. Ralph B. Clark Regional Park includes many different amenities for guests who choose to spend the day at the park including an amphitheater, barbecues, baseball fields, fishing, hiking trails, horseshoe pits, playground equipment, tennis courts and volleyball courts. The park also has an interpretive center, which is a small museum that displays ice age fossils and showcases local geology exhibits. The museum is open Tuesday and Saturday from 10am-2pm. More than 130 species of birds have been seen around the park, as well as squirrels, rabbits, fish, lizards and turtles. Park goers have even spotted bats after sundown, feeding on insects. The pond at Ralph B. Clark is filled with catfish and trout; Largemouth bass and bluegill are also found in the pond. 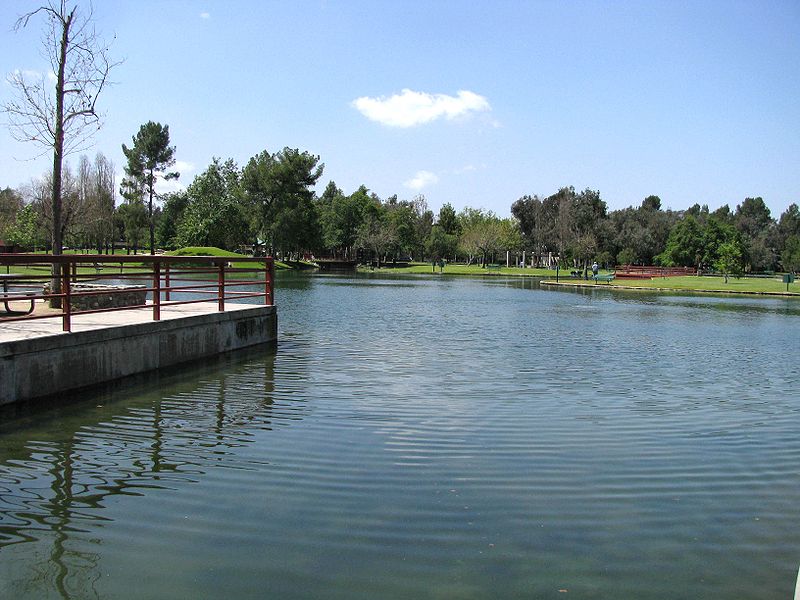 Buena Park, California is a unique city that is filled with endless activities to take part in as a family (especially in the spring). Between spending time riding some of the best rollercoasters in the west, taking part in western stunt shows, eating some of the best fried chicken in California, trying tasty boysenberry treats and spending the evening watching medieval jousting, what more could you ask for in a family vacation? For more information on Buena Park, check out the official tourism website.