/ Attractions / Chicago, IL: A History of Adaptation and Innovation

The history of Chicago stinks. Hear me out though: the name Chicago actually comes from the Native American word Shikaakwa, meaning garlic— or “skunk place.” While the smell probably kept away the vampires, it thankfully did not keep away people and progress.

Jean Baptiste Pointe du Sable, a freeman, moved to this region from Haiti, becoming the first permanent settler of Chicago in the 1780’s. While he married a Pawatan woman and coexisted with the Native Americans in the area, American settlers who came later did not. Following the Treaty of Chicago in 1883, Native Americans were forcibly removed and immigrants continued to flow into the city to take their place. While Chicago’s beginnings are less than diplomatic, social movements blossomed over the decades ranging from violent bombings like the Haymarket Massacre to the enlightenment of the Chicago Renaissance. And, of course, you can’t think of Chicago without the gangsters.

Amidst the social change came technological change as well. Chicago’s railroads allowed the city to grow and become a transportation capitol of the nation. With the resources they had, Chicagoans kept developing the city, adding museums, developing the infrastructure, and exploring social movements. This fiercely innovative spirit helped Chicago rebuild after the devastating Great Fire of 1871, not only switching Chicago’s architectural standard but the standard of the entire world to steel framing. After all that, Chicago became the home of the first skyscraper in 1885. From the magnificent Adler Planetarium to the humble Hull House Museum, visitors get a taste of the vast amount of history, culture, and class that ChiTown has to offer. 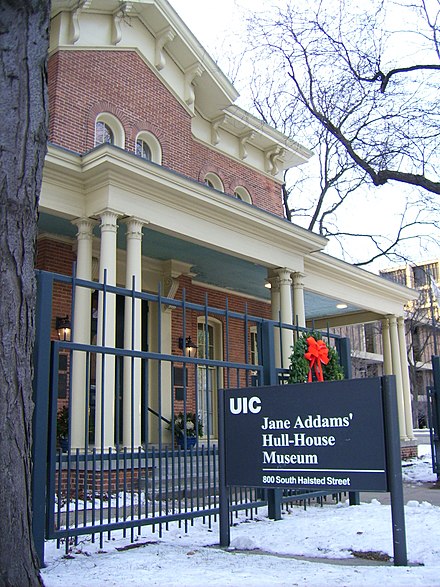 Jane Addams had a keen eye for what social reform meant, and she knew that America needed it. Immigrants that came to work on the railroads were furious and desperate; they were overworked, underpaid and underfed. After The Haymarket Massacre, it was clear that someone had to do something.

Jane Addams was that person. She created The Hull House in the 1890s as a place for immigrants of all backgrounds to find refuge. By the 1920’s it had grown to offer day-care and Kindergarten, English and citizenship classes, libraries and even classes in the arts. The formidable residents of the Hull House were empowered women ready to reform America, pioneering movements to give rights to immigrants to create child labor laws.

A visit to the museum pays homage Jane Addam’s tireless work to change local, national and international public policy. Exhibitions explore everything from a day in the life of children in the factories at the turn of the century to current artist collaborations that explore current cultural contexts. And, of course, take a peek at Jane Addam’s Nobel Peace Prize. 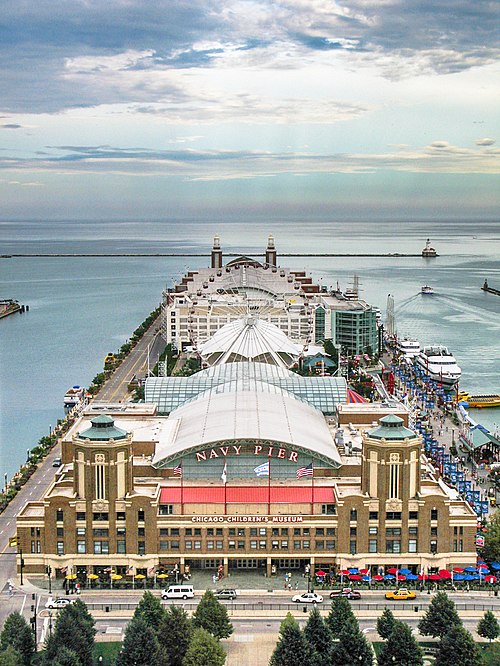 When architects began working on Navy Pier, they probably had no idea exactly how many uses this hot spot would offer over the course of its lifetime. It was built in 1916 as a place for people to hang out. It even had its own streetcar, emergency room and theatre by the 1920s. However, the playgrounds, dance hall and overall “fun” era drew to a temporary close when the Navy claimed it as technical training grounds in 1941. After World War II it became an extension of the University of Illinois that catered specifically to veterans until the campus moved. The pier was a ghost of its former glory until 1989 when commerce began to breathe life into the pier once more.

Just like in the old days, theaters and entertainment dot the pier. Huge public art sculptures are on display throughout the parks and gardens. You can also embark on several kinds of entertainment and sightseeing cruises. If water is not your thing, brave the winds of the windy city atop a towering Ferris Wheel, the Chicago Children’s Museum waiting for you below.

This guy looks like he has some bones to pick with someone. Photo credit: Wikipedia.com

What do you do when schools face cutbacks? Founders of the Chicago Children’s Museum decided to celebrate children that educational cutbacks would negatively impact. After a modest opening that spanned two hallways in the Chicago Public Library, the Museum picked up speed and support before moving to Navy Pier in 1995.

The museum fosters an interactive learning environment that families can’t resist— it is the second-most-visited children’s museum in the country. Exhibits range from authentic archaeological dinosaur fossil digs to an exhibits that invites kids into a realistic firehouse to learn about fire safety. 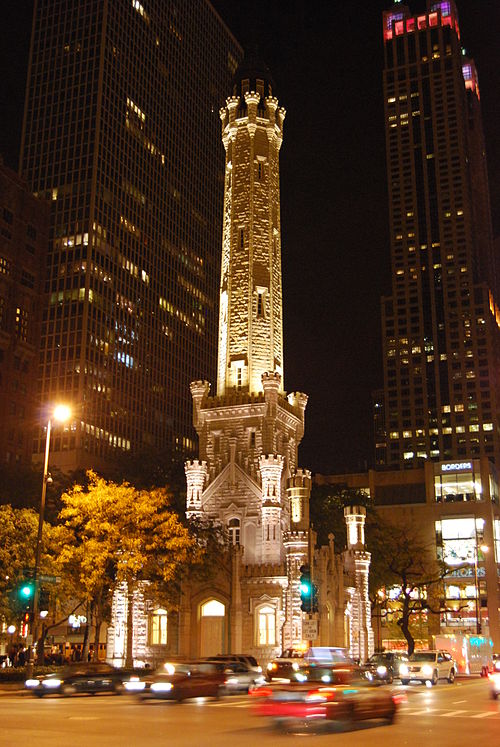 After The Great Fire of 1871, it’s no wonder that fire safety is still on peoples’ minds. Although the exact cause of the fire is unknown, history claims that it began in a small shed and became a roaring mess before anyone could say, “hay.” Because structures at the time were completely made of wood, the damage was devastating. with 300 people dead and over 100,00 homeless, it was declared one of the biggest disasters in U.S. history.

The Chicago Water Tower is one of the few buildings to survive the fire, and one of the fewer to still stand today. Inside, visitors can see an exhibition of local artists’ photography and visual art. On the outside, you can admire the architecture of the second oldest water tower in America. And if you hate it, you are not alone: another famous hater of the “castellated monstrosity” was Oscar Wilde. 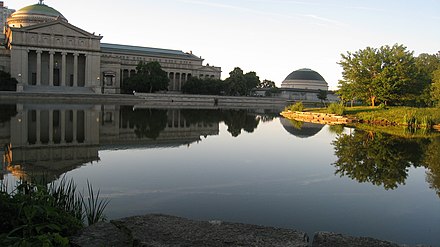 The Adler Planetarium seems like one of the prettiest places on Earth. Photo credit: Wikipedia.com

You might be a little star-struck when you first get to the Adler Planetarium. The first planetarium in the Western Hemisphere, Max Adler opened it with the idea of it serving as a “class room under the heavens.” In the socially pioneering spirit of Chicago, it is also speculated that Maude Bennot became the first woman to lead a major science museum when she took over in 1937. In 1964, inclusive efforts expanded when the museum launched the Astro-Science Workshop for high schoolers— just in the “Sputnik” of time, as the space race kicked into full gear. By the 1970’s, its facilities included incredible amounts of mixed-mode learning tools from theatrical shows to the addition of The Doane Observatory.

The museum is practically its own little universe today, with upgrades to its strong foundation and new additions that continue its growth. This past year, the planetarium celebrated the 45th anniversary of America’s first steps to the moon with the exhibition “Mission Moon.” There are even contemporary, interactive exhibitions like a Community Design Lab and “The Universe: A Walk Through Space and Time.” Take a unique glimpse at how we observe the sky in “Telescopes: Through The Looking Glass” and, of course, The Historic Atwood Sphere. The Sphere itself shows Chicago’s night sky, or perhaps how it looked without the light pollution it faces today. 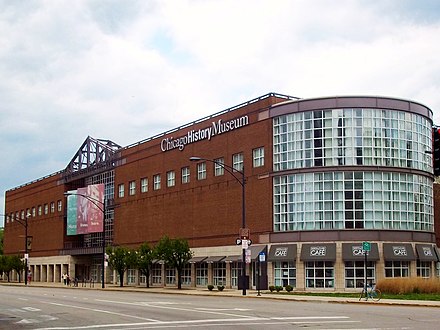 Without a doubt, the Chicago History Museum has survived it all. Photo credit: Wikipedia.

See the oldest historical artifacts of Chicago in the oldest cultural institution in the city. A true phoenix, the original building burned to the ground not one, but twice in both The Great Fire and then in a second fire that happened shortly after. The flames consumed both of the fledgeling collections, but efforts continued to pursue their dream that the institution could become all that it is now.

In the same location as the original museum, the stunning architecture of the Chicago History Museum is only a precursor to the extensive and uniquely American collections within. Two special exhibitions are Chicago: Crossroads of America and Sensing Chicago portray how Chicago’s ability to adapt to rapidly changing times resulted in the city it is today.

The museum also has two exhibitions that pay homage to President Abraham Lincoln. Chicago was his second home while his political campaign surged forward with the developing city, and visitors get a unique glimpse into what Chicago was like through his eyes in Lincoln’s Chicago. The second exhibition, Abraham Lincoln, is all about Honest Abe’s life and legacy. Other exhibitions are drenched in the history of social movements in Chicago, with several exhibits that use both written word and photography to tell compelling stories of life and all its facets. 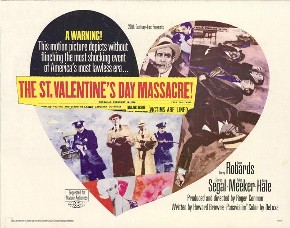 If you like pizza and perilous history, you can get both of those at Chicago Pizza and Over Grinders! Photo credit: Wikipedia.com

What’s Chicago without pizza– and gangsters? While the restaurant serves some mean pizza, it also has a pretty mean “pizza” history. The house was once a lookout post for gangs in the twenties, and the notorious gunmen of the Saint Valentine’s Day Massacre hid out here before committing dastardly crimes right across the street. As you can probably imagine, this wasn’t the hottest place for decades after, passing from unsavory character to another. After another, yes… another, devastating fire in the ’70’s, Oven Grinder’s harnessed those flames to bake up the best pizza in town!

So what makes their pizza special? It’s all the Chicago passion for pizza in a neat pot pie. With fresh, homemade ingredients and recipes your Italian grandma would recognize, you’ll never want to eat other pizza again. If that’s not your deal, you can cop out and grab a grinder. Their sandwiches and salads are also to die for! (Too soon?)

This iconic bar and tavern has been a Chicago staple for 125 years. It’s the place to go to celebrate politics, sports and beer: also known as ChiTown’s Holy Trinity. Politicians and Sox fans all come together to enjoy the down-to-earth atmosphere, a good cheeseburger, and great conversations. This former speakeasy is the place to be if you’re prepping for a Sox game! 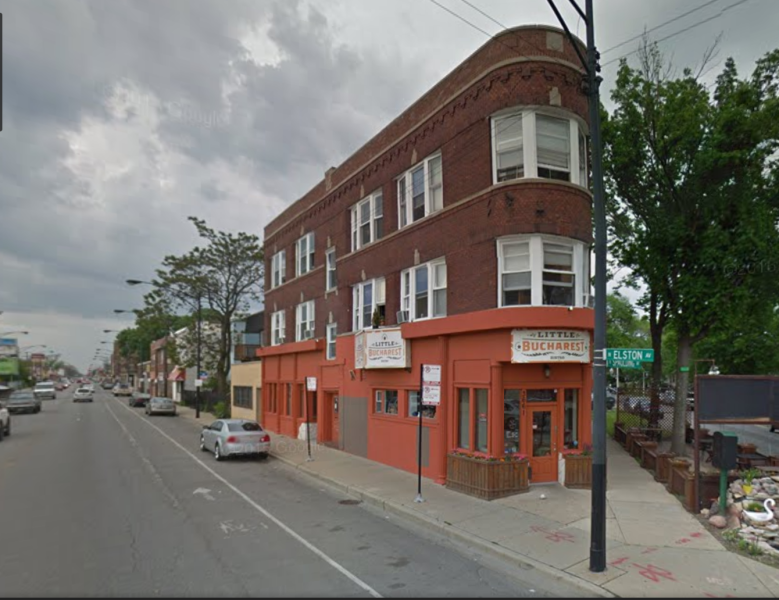 Why not celebrate Chicago’s roots with a beet salad? This European restaurant serves up Romanian dishes with a Chicago flair, bringing the two cultures together in a way only this city can. Home-owned and welcoming, Little Bucharest is sure to delight you and your family. Rumor has it, there’s a flair if you’re feeling festive. Ask about the Holy Water for a Little Bucharest treat.

Chicago is a metropolitan wonder with history packed into all sorts of nooks and crannies. A visit here is an intimate glimpse into the meaning of progress and perseverance in America, from gangsters to goulash. Have any favorites that we missed in this post? Share your favorite historical hot spot in the comments below!