There’s more to Ireland than just emerald hills and Blarney stones. For hundreds of years, the Irish fought against British rule, and for a people known for their luck, we found very little of it in their history. From the potato famine that saw the island lose 25% of its population – to their bitter war for independence –  Ireland has had their share of rough times. The island split along religious lines, with the Catholic “green” battling the Protestant “orange” well into the 1900s. A memory of this fight, the Irish flag places peace between two warring parties with its green, white, and orange pattern.

The Travel Thru History crew got a chance to visit both the Republic of Ireland and Northern Ireland (controlled by the British). For this article, we’ll feature the attractions of Ireland’s capital city, Dublin. A vibrant, bustling, modern metropolis with an old school vibe.

The streets of Dublin are a mix of historical and modern architecture. Sculptures, libraries, and famous jails number among the places you need to see while here. They’re more closely related than you think…

On Easter in 1916, Ireland changed irrevocably. Joseph Mary Plunkett, a poet, and some of his friends had spent the previous months planning an event that would shake the British crown from the island – and Dublin was at the heart of the action.

Plunkett was my great-grandmother’s first cousin, and my father blames him to this day for my rebellious nature and love of literature. Most of Ireland knows him for something else – he signed the Irish constitution and was one of the freedom fighters behind the Irish revolution. My cousin was executed hours after marrying the love of his life, Grace Gifford, in the chapel at the prison.

He didn’t die alone. 13 of his companions were killed within nine days of his execution, and one more was hung in August. Shortly after, a pardon was granted to many of the participants of the 1916 Easter Rising, and politics in Ireland took a radical shift in favor of their fight for freedom from the British crown.

Patrick Pearse, Joseph Mary Plunkett, Thomas MacDonagh, Thomas J. Clarke, John MacBride, Eamonn Ceant, and many other members of the uprising were held in Kilmainham Gaol before their execution. Although they number among its most famous former residents, the jail served as an active prison from the 1790s to the 1920s.

Many of the prisoners it held were Irish who opposed British rule, but during the famine of 1845-1850, the cells filled with women and children who were accused of begging and stealing food. The prison held men and women until 1881, when it was converted to an all-male facility.

Defunct since the 1920s, tours are first come, first serve. Kilmainham is now one of the largest empty, historical prisons in Europe today. Abandoned in 1960, it was eventually restored and opened to the public as a museum of Irish nationalism.

First built to solidify Tudor (i.e. British) rule in Ireland, Trinity College is the only college of the University of Dublin. Once exclusively Protestant, it began to allow Catholic students admittance in 1793 – although the Catholic Church didn’t agree with that policy until 1970. Housed in the buildings of a former Augustinian priory, Trinity College is a beautiful part of Dublin’s center. Sculptures dot the campus, haphazardly mixing classic and modern styles. Bram Stoker went here.  That’s pretty cool, right? The real treasures are found in the university’s library, however. Trinity College is unique. It’s Ireland’s largest library, but size isn’t all it has going for it. Unlike most libraries, this one gets its books for free – as long as they are copyrighted in Ireland or the United Kingdom. Designed by Thomas Burgh, the Old Library of Trinity College functions as the main library for the campus, and is…huge. Looking like something right out of Harry Potter, the collection is monstrous, with books arranged floor-to-ceiling on shelves that require ladders to access. It’s an impressive sight, and one any book lover could easily get lost in. 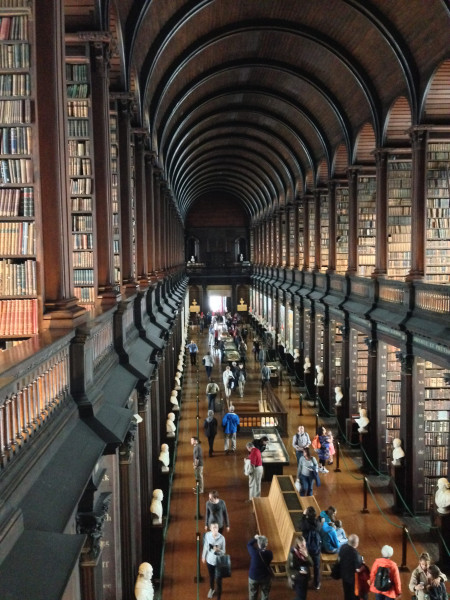 In addition to books, ancient texts, and stunning architecture, you’ll find a harp in here, too. Because it’s Ireland. And because this one in particular is of historic significant. The Brian Boru harp is one of three surviving medieval Irish-made Gaelic harps of this style, and is also a symbol of the nation.

Forget size – if you love ancient texts or art history, don’t miss the Book of Kells. That’s right, the historic illuminated manuscript that gives calligraphy students nightmares and makes art students go gaga is part of Trinity College Library’s collections. Intricate, fascinating, and truly a masterpiece, it was produced in the 9th century. All four volumes give preference to beauty over usefulness, and the artwork is sometimes so overwhelming that the text is almost illegible. But it’s pretty. Don’t get upset if you can’t recreate it in a few short hours – no one knows who started crafting it, but whoever they were, they never finished the job. They don’t allow photography of the book as we found out. So, I definitely didn’t see dozens of people taking pictures of it with their phones. I’m not bitter about it though.

Oh, and book is a bit of a misnomer…there are four volumes in the Book of Kells. A page from the Book of Kells, Photo via wikipedia

Built more than 800 years ago, this is more than a Church – although it is the National Cathedral for the Church of Ireland. Archeologists have a field day here, and just recently, six stone slabs from the 10th century were discovered here. Rumor has it that a well under one of them might have been used by St. Patrick himself in the 5th century.

Inside the cathedral you’ll find military history, a door that made peace between two fighting families, palace intrigue, and even the grave of Jonathan Swift – the writer of Gulliver’s Travels. 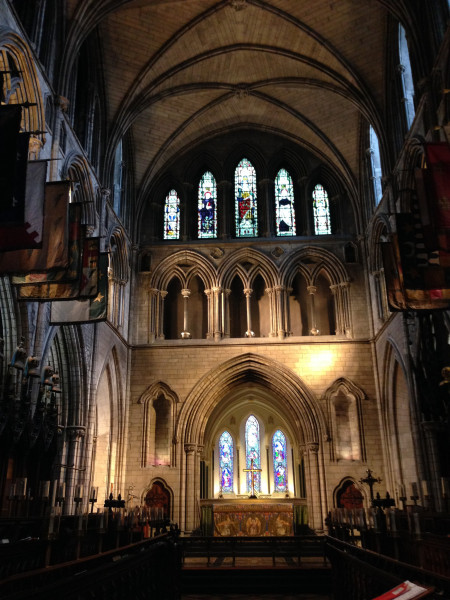 Cemeteries aren’t the first place most people think of taking day trips to see, but in Ireland, you’re never far from one with serious history. Glasnevin is much more than a burial ground. More than 1 million people are buried here, including many notable Irish writers and freedom fighters, as well as some Americans who fought in the US Civil War and for Irish independence.

Glasnevin is noted for its museum, botanical gardens, and O’Connell’s Tower, built in 1860 to honor Daniel O’Connell, an Irish politician who is sometimes called “The Liberator” for desegregating the cemetery and allowing for Catholic burial there. O’Connell is buried beneath the tower and you can visit his crypt. 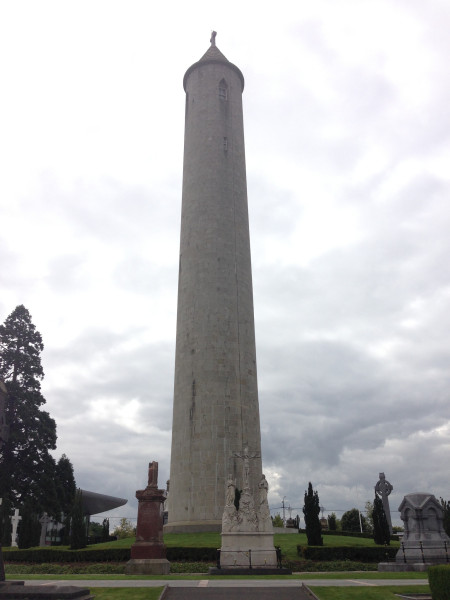 O’Connell Tower at Glasnevin. Daniel is interred at the bottom. Photo by Joe Dorsey

By now, you probably understand that the Irish weren’t exactly fans of British rule. It should come as no surprise that, when given the opportunity, the British stuck a landmark in Dublin honoring the military victories of one of the UK’s most famous generals – Nelson. And it should come as less of a surprise that, when given the opportunity and the resources, the Irish Republican Army (IRA) destroyed it.

Nelson’s Pillar – what used to be where the Spire is now. Photo via wikipedia.

As part of Ireland’s coming to terms with a new identity, O’Connell Street (that same O’Connell as above, no doubt), where Nelson’s Tower once stood, was given a facelift. Fountains and sculptures, including one that was nicknamed “The Floozie in the Jacuzzi” by the public – including the sculptor – were installed, and shops were ordered to clean up their facades. Eventually, the street was made into one of Dublin’s most beautiful spots to stroll, and the Floozie (actually named Anna Livia Plurabellle) was sent to bathe in Croppies Memorial Park.

Where the Floozie used to bathe and Nelson’s Tower stood prior to being bombed, a new spire now reaches for the sky. Completed in 2003, this incredibly thin spire towers over Dublin at a height of 397.6 ft., this stainless steel sculpture lights up Dublin’s skyline at night, and was nominated for three international awards due to its unique design. The spire’s stability is assisted by a tuned mass damper in the interior. 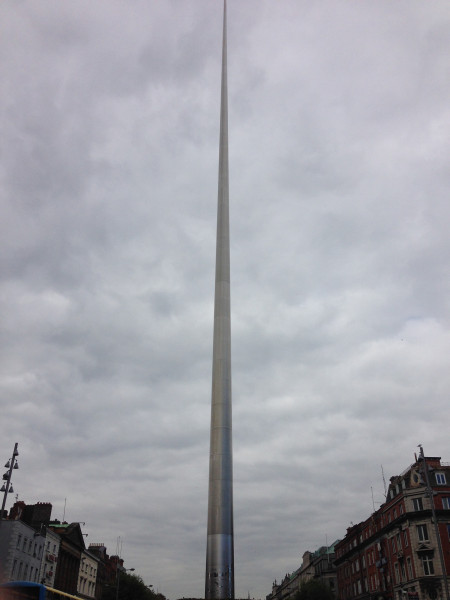 The thing is huge. Photo by Joe Dorsey.

Hungry? The Best Food in Dublin is Waiting for You Here…

After a day of traipsing around downtown Dublin, your stomach will be rumbling. We’ve tracked down the city’s best eats, close to where the action is. Bon Appetit!

Sleek, modern design coupled with beautiful plating and delightfully fresh flavors are what you’ll find in The Kitchen. This restaurant knows how to hit all the right notes in a meal, and the deserts are perfect for all ages. If you love knowing where your food comes from, check out their website. The Kitchen tells you who their suppliers are, so there’s no guesswork on your part.

Gluten free, dairy free, and vegetarian options are available. The menu is also clearly marked with allergy warnings – this is one family-friendly spot where you can dress up or take it easy, but rest assured that the food is phenomenal. 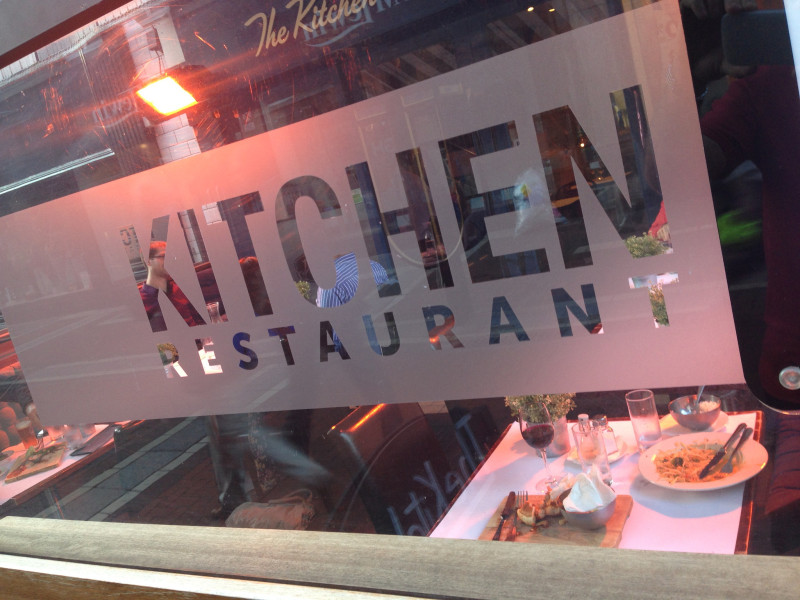 Affordable, delicious, and healthy is on the menu at Canal Bank Café. The atmosphere is relaxed, but the food is upscale. We recommend the Spinach, Tomato, Cheddar, and Fine Herb Omelette – no matter what time you dine. We went for lunch, and really liked the place.

The food is fancy enough to feel like a date night treat, but it’s prepared in a way that even the youngest members of the family will enjoy digging in.

Every trip to Dublin has to have a pub experience, and although we’re an educational show, we’d be doing you a disservice to not mention Dublin’s amazing pub culture, centered around the stout known as Guinness.

If the kids are elsewhere, check out Kehoe’s. We wanted a non-touristy, classic pub. So, our driver Frank recommended Kehoe’s. Opened in 1803, it’s one of the last heritage pubs still in service in Dublin, and the interior has been preserved since the end of the 19th century. A few famous Dublin writers hung out here at Kehoe’s, including Kavanagh and Behan. That literary spirit is still present in the pub today, as scholars, writers, and tourists sip their brews of choice and debate the world.

History, literature, and some unique built-in features that were common in older pubs but are largely absent in today’s are among the finds at Kehoe’s. The pub itself feels like a trip into history, and even if you skip the alcohol, you’ll enjoy the ambiance.

For more information on a trip to Dublin visit DiscoverIreland.ie. 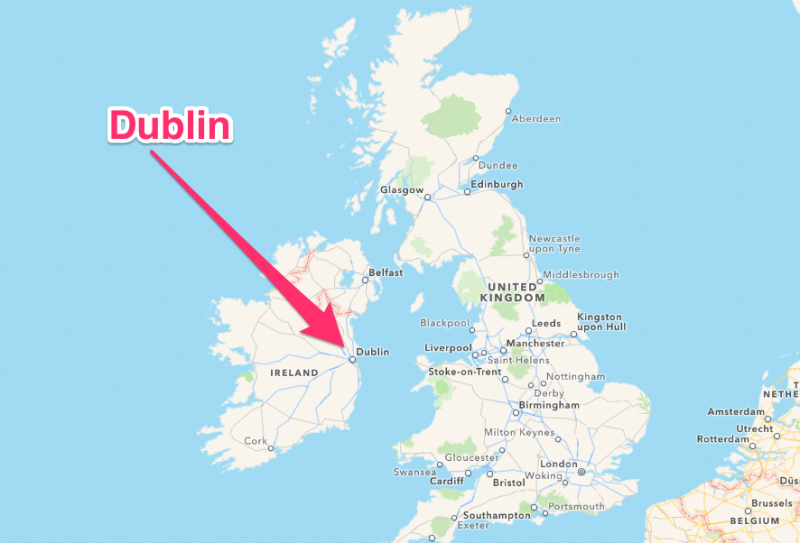 I'm a fan of honest words, clarity, and impact. A writer, editor, and translator, I spend my days guzzling coffee like a champ, living the expat dream, and being mom to world's sweetest preschooler. I’m co-owner and copywriting head at Rusmexus Writers, a history buff, and have a background in international relations.
0 POST COMMENT
NEXT ARTICLE
Belfast, Northern Ireland - Titanic Sized History
December 15, 2014 - 7:09 pm
PREVIOUS ARTICLE
Buffalo and Niagara Falls: Come for the Food. Stay for the Beauty.
November 20, 2014 - 3:26 pm