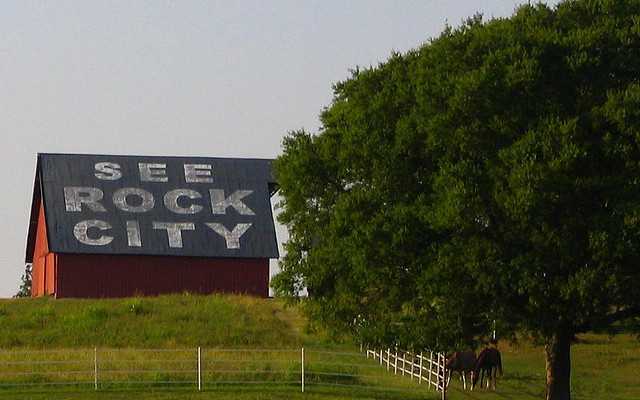 Merfolk, a giant blue ox, and a billionaire’s playground of the bizarre, top our list of kitsch stop-overs for the first post in our five-part series on American roadside attractions. Apart from being odd and memorable, these sights are standing monuments to an era when family road trips were the favored vacation, and the bizarre rest stop broke the monotony of long and winding drives.

The heyday of Route 66 is long-over, but the adventure of the open road is still an attractive lure for many families, and with gas at $2.00/gallon, maybe you should hit the road. 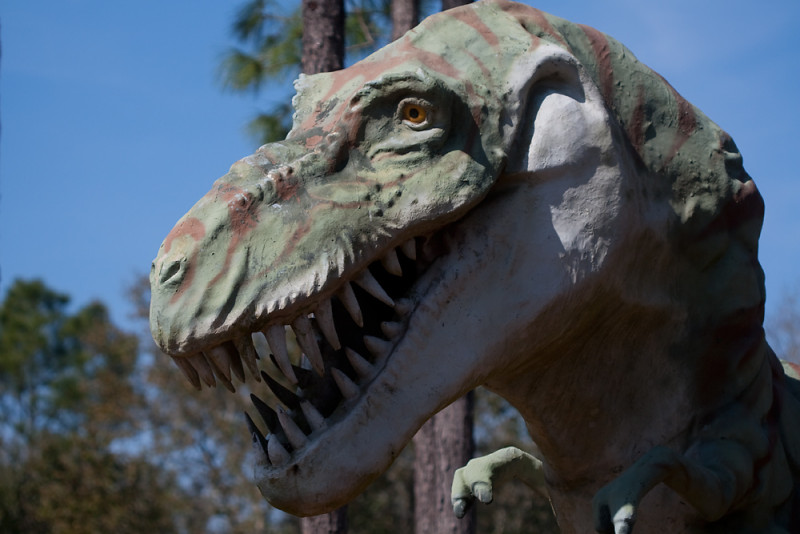 The Barber Marina in Elberta, AL is a unique roadside attraction, to say the least. A 50 ft. woman swimming in a lake, giant dinosaur statues, and even a foam-crete replica of Stonehenge can be found here. All are the work of artist Mark Clines, and were commissioned by billionaire George Barber. According to Roadside America, the project started by chance when Barber’s brother-in-law spotted Mark Cline creating some dinosaurs in 1991 at his studio in Natural Bridge, VA. Barber ordered numerous sculptures from Cline over the following years, but it took the two a little over a decade to meet. Today, their friendship and creativity continues to make Barber Marina in Elberta, AL a memorable roadside attraction for visitors of all ages.

The world’s largest Santa Claus calls the Santa Claus House store in North Pole, AK his home. Towering over 50 feet tall, this impressive Christmas-themed monument is a classic. In addition to Santa himself, there are live reindeer, sweets, Santa’s sleigh, and some comforting espresso (that’s right, Santa’s got a secret coffee habit.) Opened in 1952, the store has operated continuously. It serves as a hospitable and  welcome stop in this oil refining town, and is a popular roadside attraction for visitors traveling across the state.

Arizona – The Thing (outside Tucson, AZ) If you’ve ever gone for a drive on Arizona’s highways, chances are that you’ve seen at least one add for “The Thing.” The definition of bizarre, this unique roadside attraction is located outside of Tucson, AZ, and at first appears to be nothing other than an over-advertised rest stop. The signs leading up to it are tantalizing – a copywriter’s dream example of fascination. You can’t help but imagine the possibilities.

When you get there, “The Thing” is nothing like you ever expected. Inside a convenience store that offers great milkshakes and a refreshing break from Arizona heat, you’ll find a papier-mâché mock-up of a mummified pygmy woman and child. It’s odd, to say the least, but the history behind it is even stranger…

Rumor has it that Homer Tate, a salesman who peddled homemade creations like “The Thing” as side show props or as a roadside attraction from the 1940s-1960s, sold one of his creations to the owner of the rest stop that later became famous for “The Thing.” Despite prolific work on Tate’s part, it may also be the last place that one of his creations can be seen – apart from the occasional museum.

If you thought mermen weren’t real, think again. And be prepared to be terrified (in a good way). Among the many attractions you’ll find at the Arkansas Alligator Farm are a petting zoo, a mummified corpse of a “merman,” and a small museum. Don’t be shocked by the gravestone in the main alligator pit – it belongs to a fox terrier that was once someone’s pet, but became a gator’s dinner.

This privately owned zoo has been in operation since 1902, and has passed between three families during that time. In the early days of the farm, alligators were raised for their pelt here. The museum and petting zoo came later at this roadside attraction, but you could purchase your own baby alligator to take home with you. Today, you can still pet the alligators here, but you won’t be able to make them your pets. Babe the Blue Ox at Trees of Mystery, Klamath, California. Photo via wikipedia.

Where would you expect to find the mythical Babe the Blue Ox and his giant friend, Paul Bunyan? If you said in California’s redwoods you’d be right. One of several Babe and Paul kitsch roadside attractions in the US, this is the only one where you can drive through trees on your visit, ride in a suspended cable car above the forest floor, and learn about the cultures that inhabited the US before Europeans arrived.

An excellent stop on any trip, the Trees of Mystery has operated for over 65 years, and apart from its kitsch and camp, does teach a few valuable lessons, too. What do cliff-diving gorillas, Mexican food, South Park, and a strip mall have in common? Casa Bonita. This insane stop is located in Denver, CO, and offers guests the chance to play, dine, and have a good time. There’s a haunted cave, historic costumes and photos, a marionette show for the kids, and all forms of imagination (or insanity) made real in this multi-story restaurant. Food portions are ample, and served cafeteria style. The sopapillas are amazing, and the gorilla, luckily, is a costumed performer. South Park fans will recognize the restaurant from its cartoon portrayal, which is actually a tame rendition of this popular roadside attraction.

The dream of every devout and wealthy man might be what Holy Land once was – an amusement park for the faithful. Today, all that remains are ruins that are gradually growing more dangerous. For years, the property was kept in decent shape by the nuns who received the property in the original owner’s will in the 1980s. They did a decent job, but graffiti and mess soon escaped their ability to keep the place clean. In 2010, a murder took place in the park. During the day, however, this roadside attraction is a relatively safe and popular place to stop and take photos of the bizarre architecture and surrealistic features. There’s another fully-functioning Holy Land Experience in Orlando, FL if that interests you.

Ponce de Leon went to Florida looking for the fountain of youth. He should have traveled further north, instead. In Delaware, the Dutch have been sipping it for years! Town folklore has it that Dutch settlers discovered the fountain of youth in Lewes, Delaware in 1631. In 1937, the town government built a gazebo over the site. Today, the fountain is a bit on the dry side, with just a trickle of mud on the surface where it once flowed…so eternal youth may not be in your reach, although the fountain is still a roadside attraction that’s worth a quick side trip.

Weeki Wachee mermaid (not in costume) 1947. Photo via wikimedia commons.

The nine-person city of Weeki Wachee offers more than a stunningly small population – it’s the city of live mermaids. The roadside attraction the spurred the existence of this town is the Weeki Wachee Springs mermaid show. Performing at a depth of 16-20 feet, and doing everything from drinking grape drink and eating bananas to performing an underwater ballet, the original mermaids turned this site into one of the most popular tourist stops in the 1950s and 1960s. Today, the attraction is a part of the Florida State Park system, and continues to host camps, mermaid performances, and boat rides.

The first time I stopped here, my imagination ran wild. Stunning views (of 7 states on a clear day [or so Rock City claims…]), wild animals, enchanted walkways with fairies, stained glass, and hidden caves and crevices, this is one stunning stop. You can hike, let your imagination wander, and enjoy the show. It’s a great place to stretch your legs after a long car ride, and is located on Lookout Mountain in Georgia, just a few mile outside of Chattanooga, TN. Between 1935 and 1969, more than 900 barn roofs were painted with advertisements for this fascinating roadside attraction. 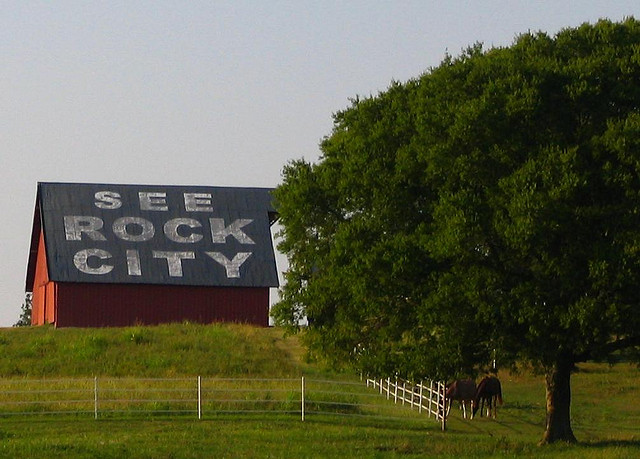 “See Rock City” was painted on barn roofs all over the South.

Rock City was home to the first miniature golf course, then named Tom Thumb Golf. The mini golf course was a part of Fairyland, built by Garnet Carter in honor of his wife Freida. Freida planted flowers and imported figurines of gnomes and fairies to decorate the space. Her thumb was so green that it inspired Garnet to charge visitors for entrance to the rock garden. The site opened to the public in 1932, and to this day is a popular roadside attraction for travelers passing through the Chattanooga area, as well as for locals.

I'm a fan of honest words, clarity, and impact. A writer, editor, and translator, I spend my days guzzling coffee like a champ, living the expat dream, and being mom to world's sweetest preschooler. I’m co-owner and copywriting head at Rusmexus Writers, a history buff, and have a background in international relations.
0 POST COMMENT
NEXT ARTICLE
The Best Kitsch Roadside Attraction in Every State (Part 2)
February 16, 2015 - 2:33 pm
PREVIOUS ARTICLE
The Essex: The True Story of Moby Dick
January 29, 2015 - 2:40 pm