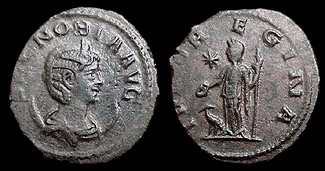 In the heart of the desert in Syria, an oasis has endured for more than 2,000 years. At its heart, a set of captivating ruins has outlasted desert winds, abandonment, and even terrorist attacks. Palmyra, a literal crossroad of civilization is at it’s own crossroad. Destroyed by war and terrorism, it now returns – restored by the archaeologists and history lovers that couldn’t bare to see it go.

The city of Palmyra was a great place to be in the 2nd – 6th centuries. The streets were filled with carts from all parts of the world, hauling goods to trade.  Under Roman rule, it was a prized gem in the Syrian province. Free, it was a power to fear, and under Muslim rule, it remained a powerful center of trade for centuries. Today, Palmyra still stands. Its people live in the nearby of village of Tadmur, and the ancient city itself is a UNESCO World Heritage site.

What’s in a Name? 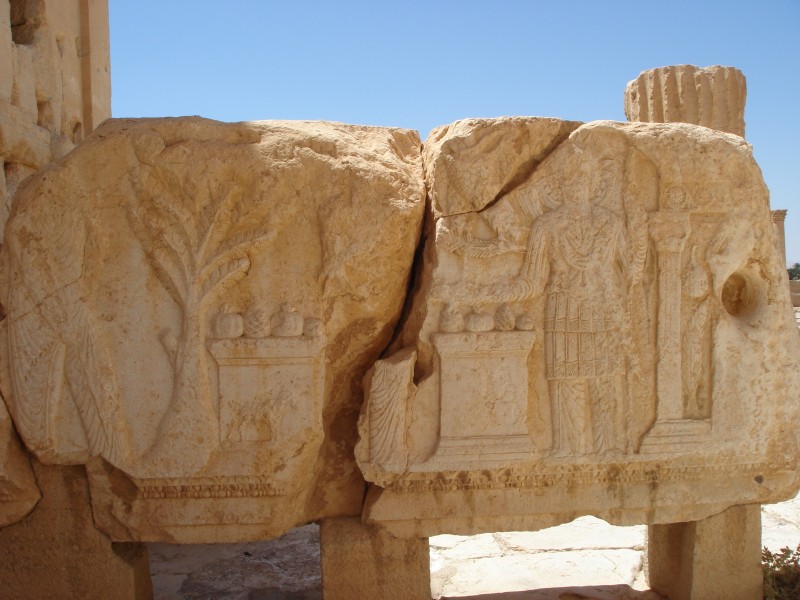 Gorgeous stone carvings are just part of the wonder at Palmyra. And look – it shows a palm tree. Surprise, surprise.

The city of Palmyra is named for the palms that once surrounded it. In Aramaic, the language that was spoken there when the city was a thriving metropolis, it’s called Tadmur which, as you can probably guess, also means “palm tree.” A green spot in the desert draws a lot of attention, so this was a very popular place to be in the 2nd century. Greeks, Romans, Egyptians, and people from all parts of the ancient western world were here.

Muslims, Jews, Christians, multi-theists; they shared the city in peace. The ruler of Palmyra at that time traced her roots to almost as many religions and cultures as crossed the city’s streets on any given day. Fluent in at least four languages, a skilled warrior and horsewoman, a philosopher, and supposedly more beautiful than Cleopatra – who she claimed to be related to. Her name was Zenobia.

That’s why it’s ironic that in a city once ruled by a female warrior and built on a crossroads of ideas, religions, and cultures, ISIS took over in 2015.

A Quick History of Palmyra 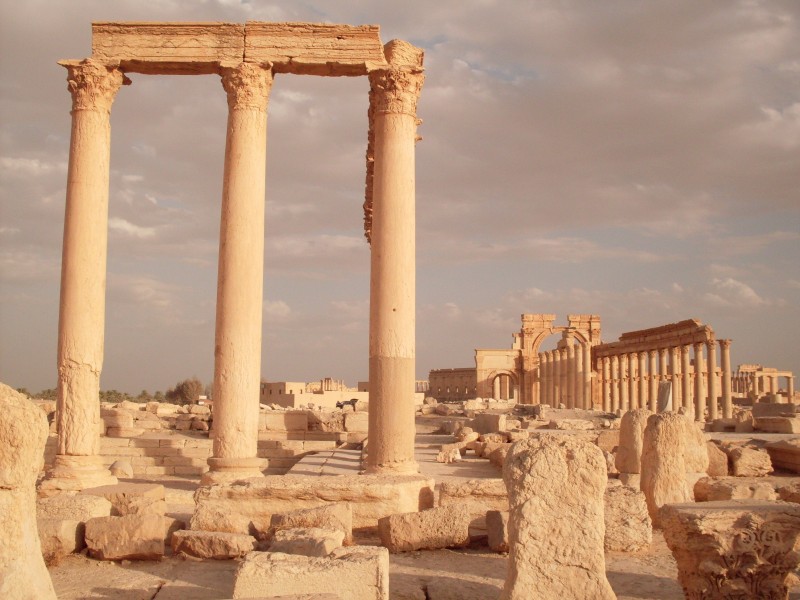 Massive stone columns were commonplace in Palmyra. Imagine what this city looked like in the 2nd or 3rd century.

Palmyra is an ancient city, and was a vital stop on caravan routes across the vast Syrian desert. Rumor has it that the city was originally fortified by King Solomon (yup, that King Solomon). Due to its strategic location, Arameans, Babylonians, Mesopotamians, Romans, Egyptians, and Greeks knew the city well and many resided within it. It was likely one of the most metropolitan cities in the ancient world.

Halfway between the Euphrates River to the east and the Mediterranean Sea to the west, Palmyra was perfectly positioned to become a rich and important destination for ancient travelers and merchants. In 323 BC, the Seleucids took over all of Syria, with the exception of the small kingdom of Palmyra and its capital city. Wealth buys strong defenses, as does a diverse and happy population.

Palmyra’s strength and independence lasted for centuries. Even the famed Marc Antony couldn’t conquer it in 41 BC, although that might be because the population heard he was coming and fled, leaving him with no one to conquer. Nomads by nature, the residents just took their belongings and got out of the way of the Roman leader.

By 14 AD, Tiberius succeeded where Marc Antony failed. That actually worked in the Palmyrenes favor, though. Trade boomed under Roman rule, extending into India and China. Hadrian visited in 129 AD and loved the city so much he made it a free city and renamed it after himself, Palmyra Hadriana.

That didn’t last long. In 217 AD, Emperor Caracalla visited and made Palmyra a Roman colony, exempting it from taxes. A favored city, Palmyra benefited from an even greater increase in trade. It had its own rulers, was largely independent, and even the local language wasn’t dictated by Rome. Aramaic was the lingua franca of this bustling city.

Then trade began to drop. Persian Sessanids blocked trade to Palmyra from the mouth of the Tigris and Euphrates rivers in 227 AD. Rome needed a strong leader to take the helm in Syria. In 255 AD, Septimus   Odaenathus was made governor of Syria, the capital of which was Palmyra. Odaenthus was a powerful ruler and a military force to be reckoned with, and quickly expanded the reach of his territories.

He was married and had an heir, but decided to take a second wife – a half-Greek, half-Arab (and potentially Jewish) beauty with a reputation for intelligence and strength. Zenobia. They soon had a son. Shortly after, while returning from battle Odeanathus and his elder son were assassinated.

Zenobia’s son Vaballathus was in line for the throne, but he was still a child. The job fell to Zenobia.

Naturally ambitious, within a few short years Zenobia greatly expanded the territory under her control. Her court included philosophers, theologians, and scholars. She was just as home there as she was on the battlefield, where she regularly walked for miles with her soldiers, fought beside them, and rode her horse into battle alongside them.

Unparalleled on the battlefield, her armies quickly conquered Asia Minor, and Rome began to get a little nervous. Zenobia was an enigma. A powerful one.

Zenobia was a powerful ruler. She was charismatic, capable, and an excellent military strategist. In a few short years, she expanded her small kingdom on the edge of the Roman Empire into a powerful one. As its borders expanded, so did her vision.

Familiar with and supposedly able to speak ancient Egyptian, Zenobia decided she wanted the land that had once been ruled by her ancestor. She decided to take over Egypt. Zenobia also decided to declare Palmyra’s independence from Rome.

Oops. But to be fair, she wasn’t first. Her husband had declared himself emperor of the city and Rome didn’t bat an eye. Only Zenobia had gone a little farther than her husband who had called himself King of Kings. She took the title “Augusta” and gave her son the title “Augustus” (empress and emperor). Only the Roman emperor was supposed to use that title…

Emperor Aurelian had enough of the wild female warrior queen. He conquered Palmyra and took Zenobia and her young son Vaballathus prisoner in 272 AD. Although how he died isn’t known, Vaballathus passed away on the road to Rome. Zenobia, on the other hand, was taken to the city as a prized prisoner, bedecked in golden chains.

History isn’t clear on what happened to Zenobia in Rome. Some stories claim she married a Roman senator, had several daughters, and that her descendants lived well into the 5th century, potentially including St. Zenobius. Other stories talk of her going on a hunger strike that eventually killed her. Other accounts mention living comfortably in a Roman villa as a prisoner and guest of the Emperor, while yet another version of her fate claims she died at Emperor Aurelian’s hand or poisoned herself.

What is known is the fate of Palmyra.  One year after Zenobia’s arrest, the city was destroyed and its inhabitants were slaughtered. Rome and mercy didn’t exactly mix. Shortly after, a garrison was stationed there to protect trade. 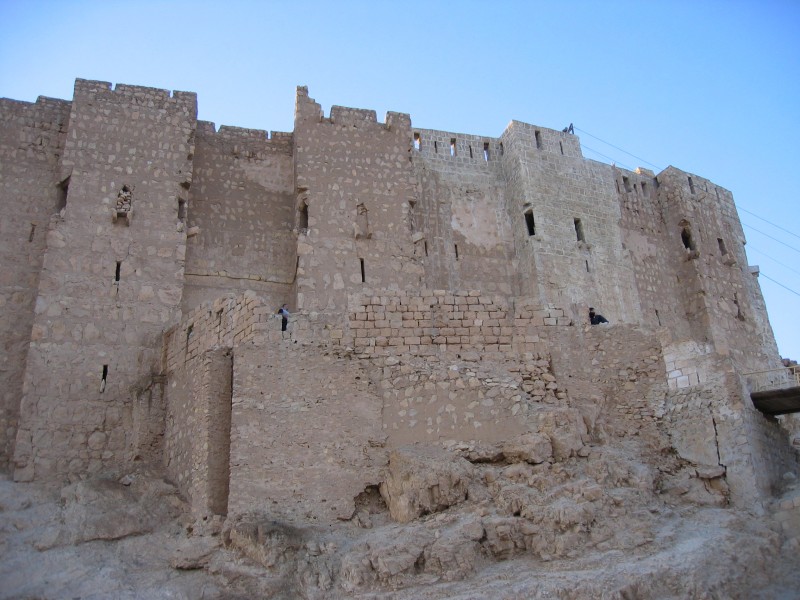 Rome destroyed Palmyra, but didn’t forget the city. In the 6th century, Emperor Justinian rebuilt the city’s defenses to protect the Roman empire, but left much of the city in ruins. Under his rule, the city experienced a brief revival and Byzantine churches were built within its walls, but a new power was on the horizon.

By 634, Palmyra fell under Muslim control. Khalid ibn Walid took control of the city in the name of the first caliph, Abu Bakr.

Conquered and fortified, Palmyra became an important city in the Umayyad Caliphate. The Temple of Bol, the principle deity of the Palmyrenes, was partially converted into a mosque. A large market was built in the city, and trade resumed. Fighting between regional powers led to the city’s walls being destroyed in 745.

The city changed hands frequently over the next few centuries. A fortress was built on a hill nearby with a clear vantage point of the city, a deep moat, and a single entry into the castle via drawbridge. A Kasbah was also built (another fortress). The city was fortified and refortified.

Earthquakes damaged the area twice in the 11th century, but Palmyra remained an inhabited settlement. In fact, although it never regained the prominence it experienced in the 2nd-6th centuries, a village remained inhabited at the site through 1932, when villagers were relocated to the new village of Tadmur so archeological excavations could explore the site’s rich history. 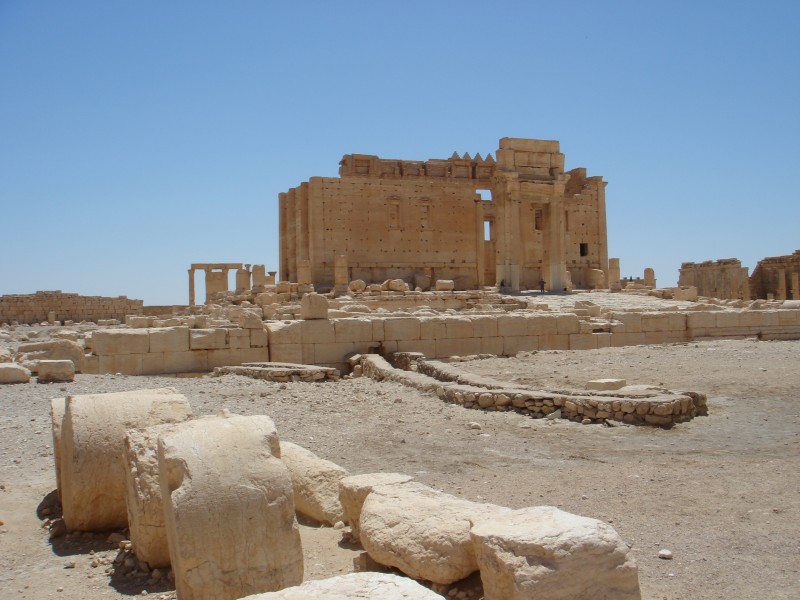 ISIS blew up most of this building, but the doorway arch is still standing.

Although the village of Tadmur still exists near the ruins today, the modern palm city isn’t nearly as vital as its predecessor. Modern Tadmur has a small population of only 36,000 and is largely built on the tourist trade, thanks to Palmyra’s role as the most important tourist destination in Syria.

In 2014 and 2015, the ancient city of Palmyra fell under ISIS’ control. The ancient city was occupied by militants and many of the city’s most important historic sites were completely or partially destroyed. The village was also captured. ISIS really lashed out against temples and figures of deities in ancient Palmyra – many of which were well-preserved before the attacks.

When the Syrian army recaptured the site with the help of the Russian army and other international forces on March 27, 2016, no one was sure what to expect at the ancient site. Russian teams removed numerous mines from the area, but archeologists were happily surprised. More of the site remained intact than they expected.

Still, much was lost.

Palmyra’s ancient theatre gained a new and gruesome history as a site where ISIS enemies were publicly executed. Museum artifacts from ancient Palmyra are still showing up on the international market. Many of the building that were best preserved are now destroyed.

International collaborations are reviving ancient Palmyra as I type. In defiance of ISIS, a detailed replica of an important arch that was destroyed in Palmyra has been built to scale in London and will be taken to cities around the world on tour. The choice of this particular arch has gotten a lot of conspiracy theorists excited – it’s the gate of the Temple of Baal. It’s not a portal to some other dimension or a gateway for demons as the most popular conspiracies would like to have you believe, though.

The replicated arch is a simple and powerful symbol of solidarity with Syria and against ISIS.

Palmyra is a UNESCO World Heritage Site and was named so well before ISIS’ occupation of the site.  As a result, international organizations and governments are helping to rebuild the historic location.

Palmyra remains impressive, despite the centuries of conflict that surround it. The ISIS occupation adds one more set of battle scars to these stone ruins, but it wasn’t the first conflict they witnessed and most likely won’t be the last.

I'm a fan of honest words, clarity, and impact. A writer, editor, and translator, I spend my days guzzling coffee like a champ, living the expat dream, and being mom to world's sweetest preschooler. I’m co-owner and copywriting head at Rusmexus Writers, a history buff, and have a background in international relations.
0 POST COMMENT
NEXT ARTICLE
Episode 308 - Dublin Podcast
May 6, 2016 - 2:31 pm
PREVIOUS ARTICLE
Boise: An Urban Treasure in the Gem State
April 28, 2016 - 3:25 pm