Does the word “swashbucklin’” inspire you? Are you yearning for the sea? Is your husband constantly asking you, “Why is all the rum gone?” for no apparent reason? If the answer to any of those questions is yes, it may be time for you and your family to learn the “Aye”- B- C’s of being a pirate! St. Augustine has a long history of being the prime place for treasure hunting and pillaging— although I would hope that that is not on your family’s itinerary this time around.

In its hey-day, the ports of St. Augustine attracted all sorts of seafaring-people; merchants and miscreants collided here time and time again for a grab at the riches on Spanish treasure ships. Unfortunately for the people of St. Augustine, Mayor Pedro Melendez de Aviles was not prepared for the first of several major pirate attacks on the city. Sir Francis Drake was considered a pirate to the Spanish, but to the English he was a talented explorer and captain that helped to affirm British presence in America. The people of St. Augustine were warned of his impending raid, but merely 100 militiamen stood between Drake and his prize. He burned the entire city to the ground, returning to England as a hero and leaving the Spanish scrambling to maintain their place in the New World. To add insult to injury, Robert Searle, known in the pirate world as John Davis, nearly mirrored the attack only seventy-two years later. Talk about a burn.

Now that St. Augustine has had a break from being ransacked, The Pirate & Treasure Museum in St. Augustine’s historic district celebrates the democracy, freedom and intrigue of buccaneers and pirates around the world. You can check out one of only three remaining Jolly Roger pirate flags and the only true-blue pirate treasure chest in the world. For the adventurous pirates-in-training, there is even a canon that your kids can fire— even if you might be too lily-livered to go near it. Another option might be to check out their newest exhibition. A 17th century Khanjarli Dagger gleams next to an 18th century trade sword, all amidst pottery and other booty discovered in a shipwreck at the bottom of The Red Sea. 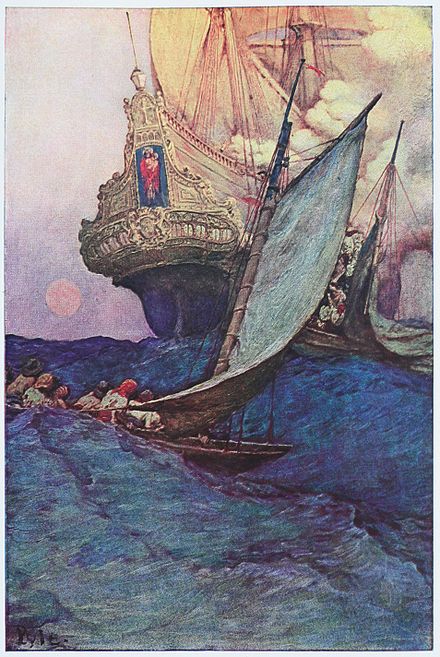 This depiction of buccaneers attacking a Spanish galleon would not be far off from what Robert Searle did to his victim ships. Photo credit: Wikipedia.com

Tickets cost roughly 4,080 doubloons— or $12.99 for the landlubbin’ adults. Tickets for your pirates-in-training between the ages of five and twelve cost $6.99, and yer wee ones four and younger get in free.