Tradition At Its Finest: Tokyo, Japan 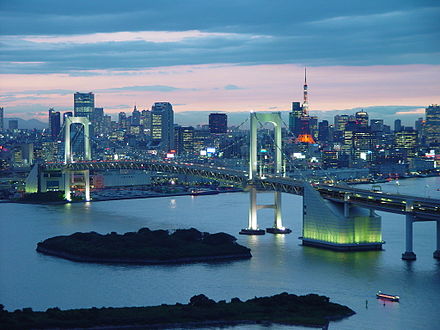 Tradition: the single most important word in the history of Tokyo. Japan’s ability to uphold its tradition and solidarity allowed it to sustain and nurture the country separately from most of the world. A unique culture emerged, one of respect, spiritualism, honor and art.  This era of peace ended when World War II reduced the country to a shadow of its former pride, bombing the city mercilessly until Japan’s surrender.

Now ranked as one of the easiest places to live despite its high cost of living, Tokyo finds a way to balance its traditions with incredible innovations; new found nationalism and one of the most tourist-friendly cities in the world.

Things To Check Out In Tokyo 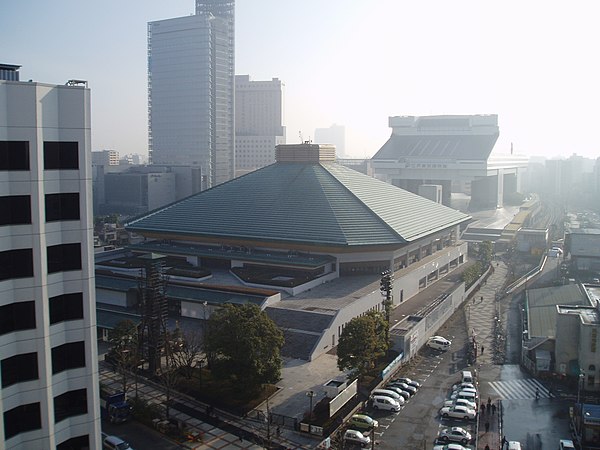 Sumo, one of the primary forms of martial arts in Japan, is characterized largely by its— well— large competitors and their lack of clothing. However, this tradition goes way back. Its roots reach as deeply as Shinto, the ethnic religion in Japan. Because of this, Sumo was a way to represent the Japanese culture widely after World War II and the decline in Japanese nationalism that followed. While some one sumo match was permitted in Tokyo at the former Ryōgoku Kokugikan in 1945, it was promptly converted to an ice skating rink. The current Ryōgoku Kokugikan was built in 1985, made complete with a museum dedicated to the history of sumo wrestling.

Tournaments are hosted at Ryōgoku Kokugikan throughout the year. Wrestlers with the least fanfare go first, with matches getting more and more intense throughout the day. Seating, much like other sporting events, is cheaper the farther you are from the action. The cheapest tickets could cost about 3800 yen, or about 32 dollars, for an entire day of matches. To go all in, you could pay 14,800 yen (or 124 dollars per ticket) and have an up-close and personal view of the best martial artists in Tokyo, if not the world. If you come the day of, however, you could even get free seating. Your best bet would be to avoid the busiest days in beginning and ends of the season and get in line early. 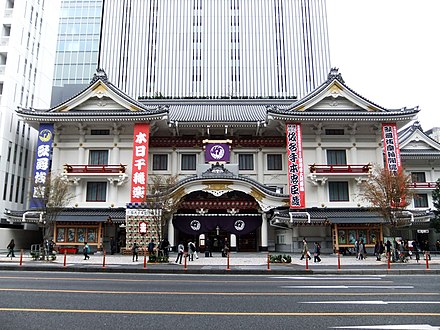 The Kabuki-Za Theatre in all of its glory. Photo credit to Wikipedia.com.

If you’re a fan of spectacle, Kabuki is a form of Japanese theatre that goes all the way back to 1603. A woman named Izumo no Okuni performed this groundbreaking art in the least probable place: a riverbed. In its earliest days, Kabuki was one of the only forms of theatre that allowed women to act! Conservative ideals banned this practice in 1652 and currently only men are permitted to play both male and female roles.  Refined over centuries to include specific props and archetypes, Kabuki has three main elements: song, dance and skill. Performers often train their entire lives to perfect very specific characters and poses. The mind and body are honed to perfectly execute their roles to preserve the discipline and pride of performance that has survived all kinds of persecution.

The Kabuki-za was first built in 1889 and has suffered all sorts of catastrophes since. An electrical fire burned the first building to the ground, then an earthquake destroyed it, and its final battle was during World War II. Unfortunately, it was destroyed once again during one of many times Allies bombed Tokyo. After its restoration in 1950, the theater found itself in a more stable era. Its elegant architecture pays tribute to the former theaters with apparent care. Performances are held almost every day and can occupy an entire afternoon or evening. There are several acts per performance with ample time to stretch your legs and grab a snack in between. 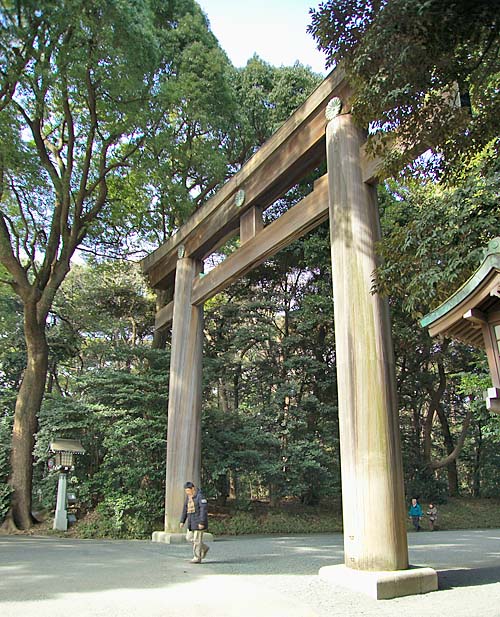 One of many traditional archways throughout the Meiji Shrine. Photo credit to Wikipedia.com

This forest is a Shinto shrine comprised of trees from all over Japan—and all over the world!  The forest is in remembrance Emperor Meiji and Empress Shoken, known for transforming Japan from a feudal state into a powerful force in the early 1900’s. People wanted to venerate the souls of the emperor and empress, believing that they became kami, or divine spirits, after their deaths. The people of Japan hand-planted hundreds of thousands of trees to establish the forest in 1920 as a place for the kami to walk peacefully for eternity. The forest has taken up a life of its own and is home to countless endangered plants and animals.

If Shinto seems entirely alien to you, have no fear. There is a list that provides visitors with shrine etiquette, allowing everyone to respect each of the holy aspects of the park. Visitors from Tokyo and around the world can walk to shrine archways, fonts and main shrine buildings to experience ancient Japanese religious practices in their purest form. You can be a part of everything from food offerings and prayers to the Sumo grand champion “ring entering” ceremony, or check out yearly festivals to honor the seasons. You can even swing by Meiji Kinenkan, The Meiji Memorial Hall, to see where the constitution of the Empire of Japan was drafted. The ways that Meiji Jingu honors Japanese culture are seemingly endless. 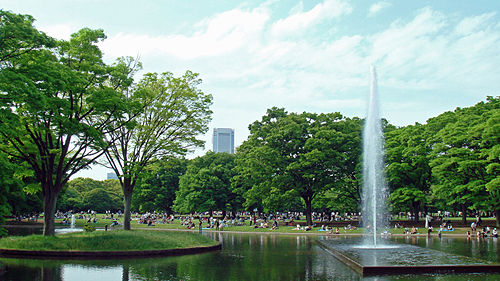 People relax during a beautiful day in Yoyogi Park. Photo credit to Wikipedia.com

Yoyogi Park is a place where serenity and cacophony combine for a cultural experience like no other. In the early 1900’s, Yoyogi Park is where the first Japanese aircraft took flight, the site of a former army parade ground, and in 1945 is was the site of “Washington Heights”: the military barracks of U.S. officers and Ally Occupation post World War II. After World War II, Tokyo began to breathe once again while hosting the 1964 Olympics. It served as the main athletes village and the site of the Yoyogi National Gymnasium.

The park was re-purposed again in 1967 and is now a place bustling with Japanese pop culture. Japanese rockers pile into the park on Sundays, people come together to practice sports, to rehearse, to perform, to dance— it’s not unlike Central Park’s outrageous, zany energy.  The softer side of this park presents itself at peaceful ponds, fountains and cherry trees. The park is famous for its cherry trees, whose blossoms draw visitors all over the world to celebrate spring. 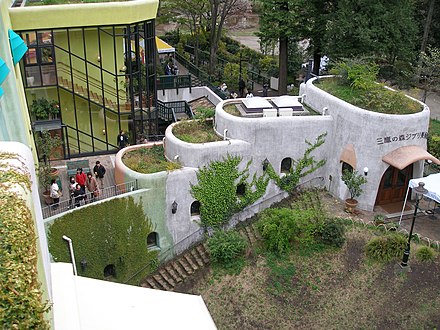 Studio Ghibli, one of the most successful anime film studios, touts such famous movies as Spirited Away, Princess Mononoke and Ponyo. Although these Japanese films are animated, many of their messages encompass adults situations and messages from environmental conservation to historical events as well as kid-friendly content.

The museum itself salutes Japanese pop culture and animation. Visitors are greeted by a gigantic Totoro before stepping into the “Wonderland” of Tokyo, according to their website. Beautiful Ghibli-themed frescos and stained glass decorate the museum’s several rooms. One room is the only place in the world to see new studio Ghibli short films. Down the hall, the cat bus from Totoro is a popular destination for younger kids. For some down time, there is even a library full of Ghibli-recommended books.

If this sounds wonderfully appealing, know that, well, it is. Tickets can be reserved up to three months in advance, and things get even trickier when you want to reserve them outside of Japan. Get a head start if you want a day of anime.

If you are a sushi fanatic, the Tsukiji Fish Market will feel like a dream come true. The market opened in 1935 and has grown to be the largest fish market in the world.  Fishermen haggle with locals, business owners bid for the biggest tuna they can afford at the tuna auction, and chefs whip up the freshest fish in Tokyo! The biggest challenge: navigating the chaos. That, and probably the fish smell. It’s risk and reward: is smelling fish all morning worth the best sushi you’ll ever have? That’s for you to decide.

If the fish market was a little too fishy, you can consider yourself a lucky traveler— or Fuunji! This restaurant serves up the best ramen in Japan. And, no, I don’t mean that desperate, go-to dinner that you enjoyed so many times in college. This shop uses some of the most savory broth in town, opting for chicken broth instead of the super-hearty beef broth you might typically find. Because of its reputation, the line typically goes out the door. It does, however, give you plenty of time to decide what you want. The good news is that the food is amazing, the better news is that all portion sizes cost the same! So if you’re in the mood for a little or a lot, you’ll get a savory meal and bang for your buck. Be prepared to grab your ticket, because after all that waiting your food will come out faster than you can say Tokyo.

Tonkatsu Suzuki At the station

If you’re hanging out at Tsukiji Station, this little hole-in-the-wall on Kitchen Street serves up some mean Japanese-style comfort food. Think fried chicken, except with a lighter, flakier kind of breading called panko. Dip this deep fried goodness in mayo or any array of sauces— you just might ditch the breadcrumbs you grew up with after tasting how great this stuff is. Tonkatsu Suzuki has a way of balancing the stick-to-your-ribs heartiness and the lightness of panko that will blow your mind. While this crowded basement-level dive deters some people from checking it out, it’s apparent that the food makes it worth it.