This week on Travel Thru History, we take a look at the Olympic city of Vancouver, British Columbia. First settled nearly 10,000 years ago, Vancouver still manages to capture the atmosphere of a young metropolis. Europeans arrived in the late 1700s, and the city is named after British Captain George Vancouver, who was the second European captain to set foot here (the first was a Spaniard named Jose Maria Narvaez). Under British rule, the city was a popular stop on the All-Red Route, a trading route that combined steamship and train transport to carry goods from Asia to the British Isles. Due to its location on the Pacific Coast and its connections to trade routes, the city also has large Chinese, Japanese, and Indian communities. Modern Vancouver has played host to multiple international events, including the 86 Expo, the 2010 Winter Olympics, and the famous international conference for “ideas worth spreading,” TED.

What to See in Vancouver, Canada

The natural beauty of Vancouver is partially the work of its coastal climate, and partially the result of the dedicated efforts of expert gardeners in the area. Two of the most beautiful gardens in the city are built in traditional Asian styles. Their focus, in addition to adding beauty to the city, is healing old wounds and creating understanding between Eastern and Western cultures.

This traditional Japanese tea and stroll garden is a part of the University of British Columbia’s stunning botanical garden, and is counted among the top five Japanese gardens outside of Japan. Among the garden’s features are a traditional Japanese tea house and an authentic Tea Garden. The Emperor of Japan (then Crown Prince) once visited the garden and proclaimed “I am in Japan.” With more than 2.5 stunning acres of garden, carefully designed and created by a team of gardeners suggested by the government of Japan, it’s a place where harmony can be found. Masculine and feminine elements blend together, and koi ponds, stone lanterns, and a range of native Japanese plants add to the ambiance. This garden is a healing place, and is named after Inazo Nitobe, who aimed “to become a bridge across the Pacific.”

Built to look like a Ming Dynasty scholar’s garden, this nonprofit space is entering its 30th year. It was the first Classical Chinese Garden constructed outside of China, and original funding came from the Chinese and Canadian governments, private donors, and corporations. The impressive buildings and structures were made by a team of fifty-two master craftsmen from Sunzhou China, without the help of nails, screws, or glue. Every joint is precisely fitted, and the result is stunningly beautiful.

You might be wondering what is so special about a suspension bridge or two….in Vancouver, a lot. This city offers a few stunning treetop adventures on bridges that are sure to make your heart race. But there’s more to these stops than treetop canopy thrills.

One of Vancouver’s most popular tourist stops, the Capilano Suspension Bridge is more than a single, rickety wooden bridge. Originally built in 1889, the Capilano Suspension Bridge offers a breathtaking view of First Nation totem poles, enchanting gardens, and the surrounding coastal rainforest. It isn’t alone, either. Also located at this attraction, you’ll find the newly built and ecologically friendly Cliffwalk, a labyrinthine series of cantilevered bridges that are built along a granite precipice. Below, the Capilano river churns away, and the only thing keeping you above ground are 16 anchor points. Treetops Adventure is another feature at this destination – a series of 7 suspension bridges that weave their way through a forest that is more than 1300 years old. Open from 9-7 daily, it’s an adventure you won’t want to miss while in Vancouver. 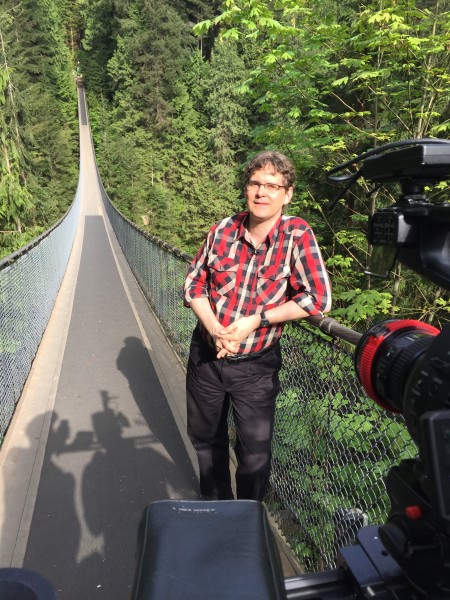 A behind the scenes look at our interview for the Travel Thru History Vancouver episode at the Capilano Suspension bridge.

If the thrilling and adventurous atmosphere of the Capilano Suspension Bridge is a bit too fast-paced for you, check out Lynn Canyon Park and Suspension Bridge. This relaxing park is a place where you can go on a family picnic, hike for a few hours on the trails, or cross the Lynn Canyon Suspension Bridge for a fascinating view of the forest canopy. Originally opened in 1912, this has been one of Vancouver’s most popular spots for more than a century.

Opened in 1959 as a Vancouver Centennial project, the museum is a non-profit that focuses on educating the public and sharing Vancouver’s history related to water. It’s an active research center, and harbors (no pun intended) a constantly growing collection. You’ll find the NASA undersea research vessel Ben Franklin here, along with the extensive Chung collection of materials with information and artifacts from Captain Cook to Canadian Pacific Steamships.

We loved the St. Roch. It’s a part of the museum’s extensive collection, and a huge part of North American maritime history. This ship was the first to make the Northwest Passage crossing from west to east. The museum also introduced us to Captain Vancouver and his impact on Canadian history.

Board the St. Roch at the Maritime museum. Photo via wikipedia.

This isn’t just another police museum – it’s the oldest in North America and houses a collection of more than 20,000 artifacts. From confiscated items you won’t believe exist to historical artifacts from the Vancouver Police Pipe Band and the Vancouver Police Dog Squad,  there’s plenty to see. The detailed morgue and autopsy area make it a perfect site for film crews. When you visit, you might recognize the set up. Rumor has it that the morgue has played a role in quite a few TV shows, movies, and even student films since it stopped working in 1980. The morgue at the Police Museum. Image via TripAdvisor.

Current exhibits worth seeing include c̓əsnaʔəm, the city before the city, an exhibit that explores the Musqueam nation identity, cosmology, and culture. If you’re in the mood for a more light-hearted adventure, check out Stefan Sagmeister’s The Happy Show or #makesmehappy. You’ll find some exciting art exhibits here, too – from the Neon Vancouver exhibit to The 50’s Gallery, the Museum of Vancouver was one of our favorite stops.

Started as the Art, Historical and Scientific Association on April 17, 1894, the museum changed names a few times. At first it was known as the City Museum. Later, it was rechristened the Centennial Museum, and in 2009, it was named the Museum of Vancouver. The year after, it won the Canada Museums Association award for Outstanding Achievement in Management. The museum’s hip, young vibe makes history, art, and science fun for everyone. Don’t miss it!

A massive inner city park, Stanley Park was the first public park in Vancouver Canada, and remains the largest. This 400-hectare space offers some of the most scenic views on the Canadian Pacific Coast. The park’s seawall is known for its beauty, too. Miles of trails and tons of historic landmarks make this the perfect place to spend a day. Check out the beaches, totem poles, and gardens while you’re here.

A bike ride to Lost Lagoon in Stanley Park is a must do. Photo via wikipedia.

Where to Eat in Vancouver, Canada

Hungry? You should be! Vancouver is a growing food destination, and the menu is limitless. Let your inner child out, and head for dessert first while you’re in town. Vancouver’s most famous food stop isn’t a restaurant…it’s an ice cream parlor. Once you’ve had dessert, it’s time to head off to a truly Canadian treat, where making the impossible happen is part of every day in the kitchen.

I don’t know anyone who doesn’t like ice cream, and gelato takes it to another level. If you’ve already tasted this delightful frozen confection, and even if you’re a gelato virgin, you’re going to love La Casa Gelato International. A Vancouver institution, this dessert shop sells 508+ flavors of gelato, including garlic, lychee, and Spanish coffee. While I’m not sure how I feel about garlic gelato, most of the flavors that Vince and his team create are scrumptious. A friend of mine has cousins in the area who insist on taking visitors here…it’s not an ice cream shop. It’s an institution.

Oh, and they also carry a wide selection of treats like almond nougat, chocolate dipped waffle sticks, and – of course – cannoli. Did I mention that their cones are made using an old family pizzelle recipe? Yum!

With three locations in Vancouver Canada and a growing reputation as one of the most hip and delicious eateries in the city, The Flying Pig is a major part of the city’s food scene. Unlike the name, the menu isn’t pork-based. Instead, the chefs here do a masterful job of making flavor combos work that you never would have imagined – something they have in common with La Casa Gelato International. From Bone Marrow Cheesy Bread to the Pan Seared BC Sablefish, I can promise you that most of the items on the menu offer a new twist on comfort foods you already love – with ingredients you’ve probably never tried (or heard of!). 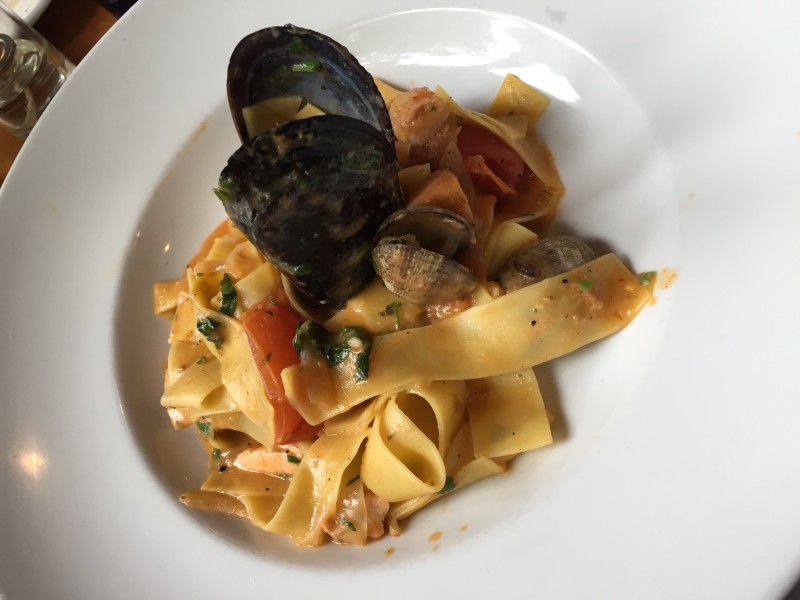 Pappardelle and mussels at Flying Pig. Photo via Joe Dorsey.

We’re not great salad eaters, but this place was amazing. Joe and the guys enjoyed some delish dishes at this cafeteria-style eatery. Made from locally-sourced and organic (when possible), seasonal ingredients, most of the menu is gluten-free and either vegan or vegetarian. There are a few meat and poultry dishes available, too. Their location near Canada Place and the Harbour Green Park makes Tractor a great pick before an evening stroll or as a mid-day break from sightseeing. We’d go back here in a heartbeat, especially for the Flank Steak Salad. 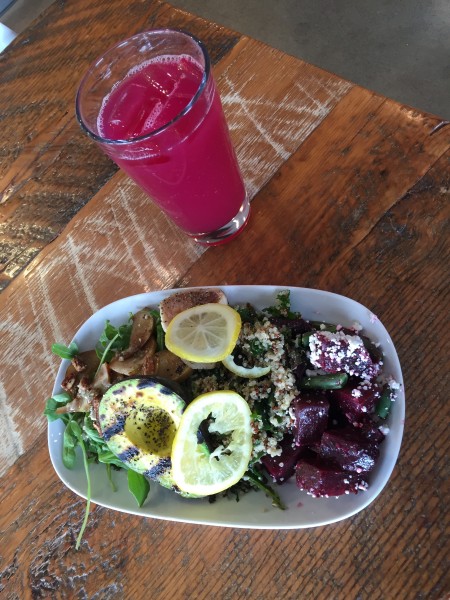 We were blown away by this grilled tuna, avocado and beet conconction. Photo by Joe Dorsey.

This place is hard to get into, but well worth the wait. Another great spot for local, seasonal food, the menu at Vij’s is Indian to the core, but the spice blends are uniquely Vancouver. Run by a husband and wife team, Vij’s opened in 1994, and the crowds haven’t stopped. The New York Times said it is “Easily among the finest Indian restaurants in the world.” In the mood for a curry? Check this place out.

Vancouver is a Canadian city with a hip vibe, great food, and a captivating history. If you’re heading here for vacation, head to their official website. We’d love to hear about your adventures in the comments. And remember, sharing is caring – so please share this article!

I'm a fan of honest words, clarity, and impact. A writer, editor, and translator, I spend my days guzzling coffee like a champ, living the expat dream, and being mom to world's sweetest preschooler. I’m co-owner and copywriting head at Rusmexus Writers, a history buff, and have a background in international relations.
0 POST COMMENT
NEXT ARTICLE
Lustron Homes: The post-war experiment that aimed to change housing forever
April 6, 2016 - 5:33 pm
PREVIOUS ARTICLE
9 Famous Landmarks That Aren’t What You Think They Are
March 2, 2016 - 12:08 am