U.S.S. Slater? More like U.S.S. See-Ya-Later. This innovative destroyer escort was the key in destroying German U-Boats during World War II, giving the Americans the upper hand in the Atlantic. The last of its fleet, the U.S.S. Slater now continues to serve America as museum and memorial to the men who served her. 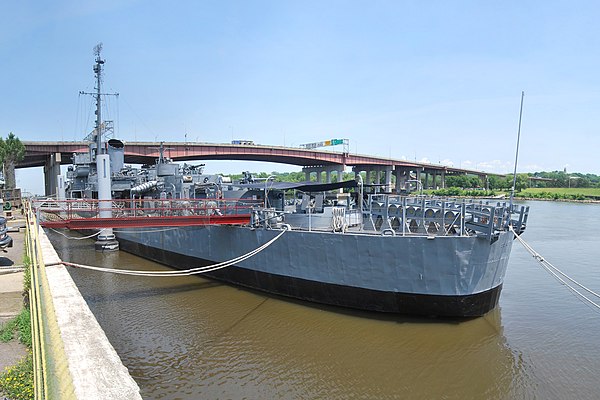 The U.S.S. Slater at its permanent residence. Photocredit: Wikipedia.com

German “Unterseeboots” were the bane of Allied forces at sea. Every bit as pesky as they were to pronounce (and twice as dangerous), the U-Boats were submarines that easily detected and demolished Allied destroyers. Between Japanese Kamikaze pilots above and U-boats below, America’s ability to combat Axis forces was crippled. We needed a solution, and that solution was the mass production of destroyer escorts like the U.S.S. Slater. Compact and lethal, these little buddies would eliminate U-Boats so that destroyers could keep their eyes to the skies. 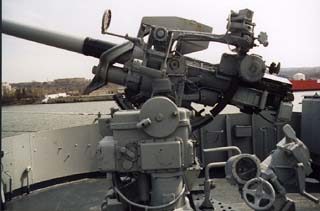 This is a 3″/50 caliber gun aboard the U.S.S. Slater. That spelled trouble for enemy forces. Photocredit: Wikipedia.com

The U.S.S. Slater was named after Frank O. Slater, a naval war hero. After its Christening, she then began her career as a lean, mean, U-Boat-killing machine in 1944. Accompanying destroyers through both the Pacific and Atlantic Theaters of World War II, she served her most important time in Greece. Its goal was to stop the threat of Communism spreading into Western Europe, the destroyer escort expertly performing its duties until its retirement in 1991.

Two destroyers and a carrier ship are under attack in this photo. See how the destroyers have wide turning radii? This might have looked differently with the maneuverability of a destroyer escort. Photcredit: Wikipedia.com

With massive responsibilities and the threat of death always accompanying her, it is no shock that sailors aboard destroyer escorts developed deep connections to them. The Destroyer Escort Sailors Association bought The U.S.S. Slater in 1993 to preserve her memory. The last of a fleet of 563 escorts of its class, the U.S.S. Slater experienced a seventeen-year facelift. Even after the U.S.S. Slater moved to Albany in 1997, countless volunteers lovingly worked to restore the ship to its peak condition. Not only is the U.S.S. Slater a labor of love, but it is a testament and museum to the service of men that served in the Navy. Many men who served her have donated their gear and personal belongings to allow her to serve now as a memorial to the men who lived and died for our freedom so many years ago.

Tours of the U.S.S. Slater happen rain or shine from early April to November. Admission is $7 for adults with other discounts for seniors and kids. Check it out for a “merry time” celebrating maritime accomplishments and honoring the U.S. Navy.