/ Featured Cities / Albany and Saratoga Springs, NY: Upstate is Where It’s At

In season 3, we got a chance to showcase a part of New York that’s less heralded, but no less rich in American lore and history. We headed upstate and visited the beautiful Saratoga Springs and the capital, Albany. Driving around upstate is a wonderful experience, made all-the-richer with the historical knowledge you can learn along the way.

What to do in Saratoga Springs

Since the 14th century, indigenous peoples have revered Saratoga Spring’s fresh springs and spouters. Their abundance and the benefit of the minerals they contain was quickly noted by settlers, as well. In a few short centuries, Saratoga Springs grew a reputation for its abundant, healing freshwater. Water from these springs is still popular among hikers, visitors, and natural health enthusiasts. If you’re up for a light hike, check out Spa State Park, home to many of the most famous springs and spouters in the area. Officially recognized in 1938-1939 and christened Geyser Park, Spa State Park has been an active source of local recreation and health since 1910. A spa was built on the site in 1935, and the classical architecture of the facility is part of the charm of the modern park. Two golf courses, several trails, outdoor pavilions, and numerous other amenities provide a day (or more) of fun activities for all ages. The Gideon Putnam hotel and spa sits inside the park and is named after the area’s founder.

You can’t talk about Saratoga without mentioning its famous race track, that’s older than Churchill Downs in Kentucky. Graced with the nickname “Graveyard of Champions” after two horses with terrible odds defeated reigning champions, Saratoga is the heart of America’s horse-racing history. The first track was built in 1863, and the following year, changed location to the opposite side of Union Avenue. Today, both courses are still in use.

The Saratoga Springs Racetrack is a symbol of the area’s defiance. While the country was at war, inhabitants of Saratoga raced their horses, ignored the outside world, and raced their thoroughbreds. In a 1913 race at Saratoga Springs, the word “upset,” meaning an unexpected win, was born when a horse named “Upset” beat the highly favored “Man O’War” (who was coming off a 21 win streak).

Stop by the park and see the history, watch the horses, or spend a little time relaxing in the casino. There are plenty of activities for children as well. And the springs that make Saratoga famous are here, too…Big Red Spring bubbles up on the racetrack’s grounds.

A few decades before horses dominated the racetracks in Saratoga Springs, they could be found nearby in a prominent role on the battlefield. Saratoga National Historic Park is more than just a park, it’s the place where American history changed. Considered to be among the top 15 battles in the world by military historians, it was the Battle of Saratoga (or more appropriately, battles) that broke the Brit’s backs in the fight to keep the colonies.

Following the defeat of the British at Saratoga (who were supported by German mercenary troops), the Spanish, French, and Dutch also declared war on Britain. America now had allies, and the Battles of Saratoga started it all.

This 4 square mile field looks innocent today, with a gentle incline, trees, grasses, and weeds growing peacefully upon it. During the Battles of Saratoga, the fields were covered with tens of thousands of soldiers, fighting for home, for country, or for cash. British forces on the edge of starvation faced off against an ever-growing American army, proving once and for all that the Americans could fight and win the war against the British on their own terms. 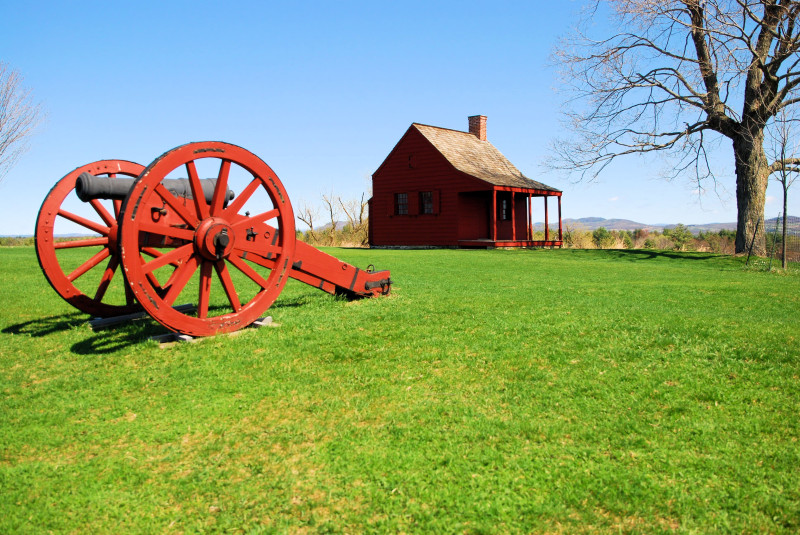 Today, you can tour the battlefield with an MP3 self-guided tour, contract a professional guide whose expertise is certified by the park, or simply walk around the field and feel the echo of the past. In winter, it makes a great course for snowshoe enthusiasts. The battlefield is open year-round to pedestrians during daylight hours. Sit and have lunch overlooking the hills. That’s what we did.

Erected 155 feet above the surrounding land, this obelisk-shaped monument commemorates the surrender of British General Burgoyne. The monument is really stunning. Not enough people even know it exists. It’s a town just up the road from the battlefield called, what else, Victory. It offers a unique vista of the battlefield and countryside below. The tower features 4 niches, each with a statue of an American General who fought at the battle.  One of the four slots is vacant though – a slight to Major General Benedict Arnold who fought for the Americans at the Battle of Saratoga and switched sides shortly after. 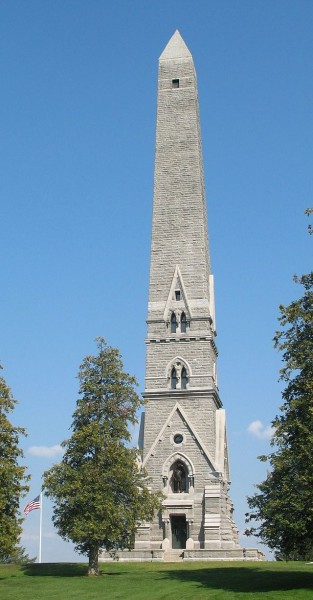 Take note that this site is only open to visitors from Friday through Sunday during the summer season, as well as on major holidays.

Places to Visit in Albany

Albany is a fascinating place, the seat of the state of New York, and a charming location unto its own. Albany’s history intersects with America’s national destiny at many points. From World War II ships to the Capitol building, known for its architectural beauty and complexity, the city of Albany has much to offer. And if you’re hungry, there’s something for you as well…

The last remaining Destroyer Escort with the original configuration from a fleet of 563, the USS Slater served in Pacific and Atlantic battles. It is one of only a dozen or so similar ships that were created to defend naval forces during World War II and to fight Nazi U-boats that still exists. The Slater utilized depth charges, hedgehogs, and torpedoes to corral and sink the U-boats, and they were amazingly effective. The boat was decommissioned and joined the Hellenic (Greek) Navy in 1951, where it remained in active use until 1991. 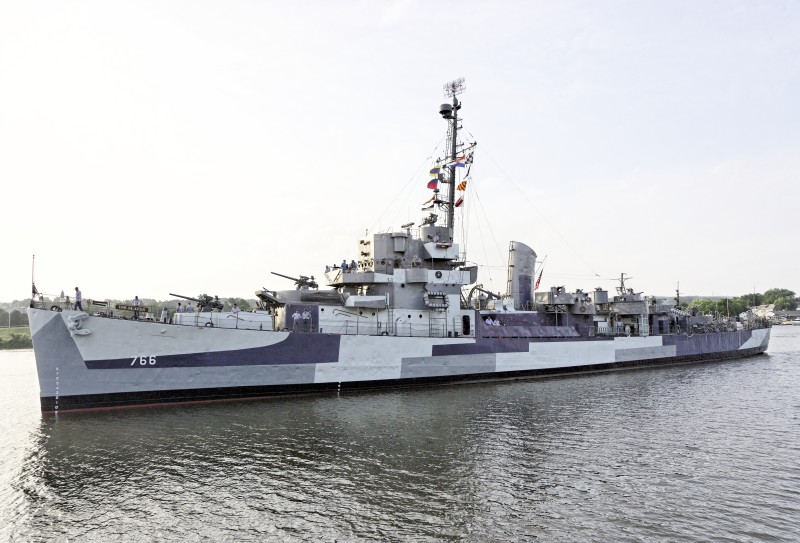 The USS Slater docked in Albany in “Dazzle Camouflage.” Photo via Albany CVB.

Today, the USS Slater is a museum. Painstakingly restored over a period of 15 years, this boat is open for tours from April to November, Wednesday through Sunday, from 10AM – 4PM. Guided tours, overnight camping for youth groups, and naval reunions are a few of the extras visitors can enjoy by scheduling their visit in advance and asking about the boat’s availability for special events.

Maintained by the Destroyer Escort Historical Foundation, this ship offers adults and children the opportunity to see what the inner workings of one of the most important lightweight ships from WWII look like.

Finished in 1899 under Governor Theodore Roosevelt’s leadership (there’s a name you’ll recognize!), the Capitol building’s cornerstone was laid in 1871. Five architects, $25 million dollars, and 32 years of effort went into the construction of this building. It was instantly hailed as one of the most extravagant, unique, and beautiful pieces of American architecture, but also of excess.

The Capitol in 1900. Photo via wikipedia.

In 1979, the Capitol was named a National Historic Landmark for its fascinating appearance and history. Repeatedly restored following a roof collapse (the vaulted ceiling in the Assembly Chamber was in jeopardy of collapsing, indicated by small pieces of stone and dust falling from the ceiling- it never actually collapsed) only ten years after the initial construction and a fire in 1911, the building is now under renovation again (completed last summer). 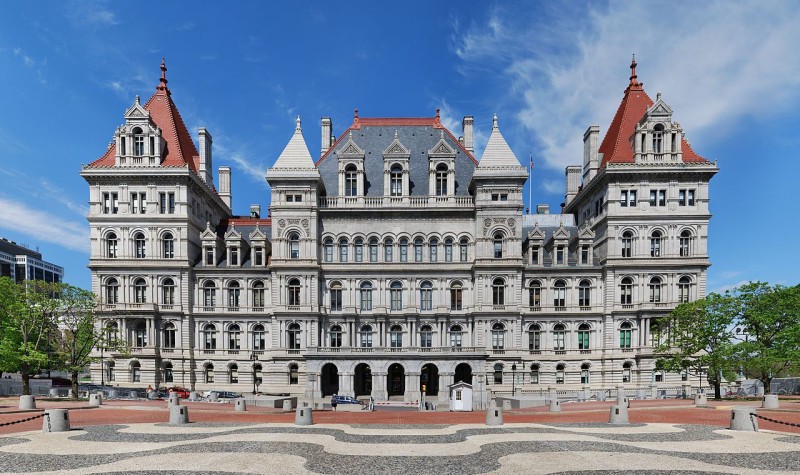 Resembling a European palace, the fascinating architecture of this building is worth a visit. Guided tours of the facility are available Monday through Friday at 10 am, 12pm, 2pm, and 3 pm, but must be scheduled in advance. Be sure to see the amazing, “million dollar staircase” which actually cost 1.5 million.

Dining and Great Grub in Albany

We’ve tracked down two of the best places to dine in Albany and Saratoga Springs for your enjoyment. A few added pluses to these restaurants are their emphasis on eating locally sourced foods, and their gluten free menu options:

Forget the oysters…they’re good, but the best part about this restaurant is the steak selection. From succulent filet mignon to a prime New York strip steak that will leave you full but begging for more, Jack’s is fine dining done right. The Berkshire blue cheese crust adds a ton of flavor to the steaks offered here, and I’m personally aching for a bite of Jack’s classic crème brulee. If you’ve got little ones along for the ride, check out the strawberry cotton candy for a fun finish to their meal.

Offering twelve in-house brews, a full menu, and a sizable side of history, this pump station once delivered over 7 billion gallons of water to meet the needs of Albany’s residents. Two gigantic (and operational) cranes remain in the building from its days as a pump station, and assisted in the installation of fermenting and serving tanks for the brewery now found on-site.

The Evans Brewing Company has been around for a while, too. They operated a brewery continuously in Hudson, NY from 1786 through 1920, when the Prohibition closed the brewery’s doors. Historic memorabilia from the Evans family’s history in the brewing business and the pump station’s origins decorate the halls of this establishment.

For more information on a visit to Albany and Saratoga Springs visit iloveny.com

I'm a fan of honest words, clarity, and impact. A writer, editor, and translator, I spend my days guzzling coffee like a champ, living the expat dream, and being mom to world's sweetest preschooler. I’m co-owner and copywriting head at Rusmexus Writers, a history buff, and have a background in international relations.
0 POST COMMENT
NEXT ARTICLE
Buffalo and Niagara Falls: Come for the Food. Stay for the Beauty.
November 20, 2014 - 3:26 pm
PREVIOUS ARTICLE
Flagstaff, Arizona: Astronomy to Gastronomy
November 6, 2014 - 3:40 pm