While America was at war with itself, an old fashioned athleticism took the forefront in Saratoga. The Battle of Gettysburg littered fields with American soldiers only a month before the first thoroughbred horse race at Saratoga—yet the races brought together thousands of Southern tourists and locals alike. After seeing how horses could bring people (and money) together in one place, The Saratoga Association formed and began to construct a racing empire that is celebrating 150 years of horses. 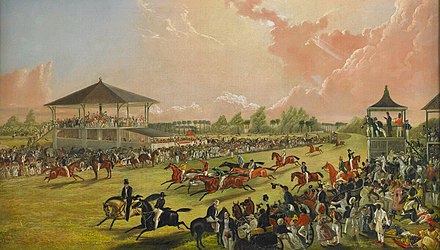 This race in Jacksonville Alabama was a precursor of the popularity that graced the Saratoga Race Track. Photocredit: Wikipedia.com.

Horse racing was already popular in the South, so when rich Southerners came to vacation in Saratoga it was only natural to see the finest thoroughbreds in America race for the finish line. While competition was fierce, I would imagine that a place like Saratoga was a haven; a place where people could witness collaboration among trainers and horses to achieve the best possible athletes. Saratoga was a place where visitors could perch in the stands of The Graveyard of Champions and watch Man of War lose to Upset— to breathe, to feel the waters of the springs, to feel hearts pounding with hooves and allow the turmoil that raged in the broken South to fade from thought. 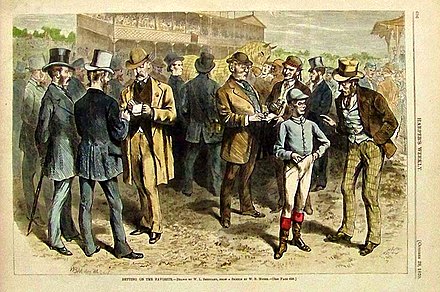 This 1870 portrait depicts a common scene at any race track back in the day: the boasting jockey, the betting gentlemen, and a horse raring to race. Photocredit: Wikipedia.com.

In 1950 the National Museum of Racing and Hall of Fame was constructed to honor the best horses, trainers and jockeys that this country had ever seen. In its halls you can find everything from trophies to paintings to films that honor the centuries-old art of thoroughbred racing. One current exhibition, Hall of Fame Heroes, honors horses, jockeys, trainers and Pillars of the Turf: those that were enthusiasts of racing that left an indelible mark on its culture. And who says that art and sport can’t combine? An art historian would be pleased to find collections of both Charles H. Theirot and W. Smithson Broadhead, two masters of sporting painting.

This is a memorial for Seabiscuit, one of the most accomplished race horses of all time. Photocredit: Wikipedia.com.

There you have it, the trifecta: health, history and horses. A visit to the museum will cost $7 with a discounted $5 price for seniors and student. Kiddies under five get in free!

Keep an eye out for even more facts here at the blog before joining us Saturday. Let’s explore Albany and Saratoga on Travel Thru History!