It’s night, and the odor of sulfur hangs heavy in the air. Your feet are hot, and little flashes of blue are dancing around the rocks in front of you. The sneakers on your feet are melting, and the road beneath you is split and cracked. Vents spewing toxic carbon monoxide fumes protrude through what was once a peaceful highway.

You aren’t in a horror movie, although the town of Silent Hill was based off the remains of this once-idyllic locale.

You’re someplace where the terror is real. Just ask Todd Domboski. In 1981, when he was 12, he spent his Valentine’s Day desperately clinging to a tree branch while his feet dangled into an abyss in his grandmother’s yard. He was playing when the pit opened under his feet, almost swallowing him. The fumes from the pit contained 30 times more carbon monoxide than what the federal government considers a safe amount.

Todd’s cousin saved him, but the hole is still there.

This isn’t the doorstep of hell. 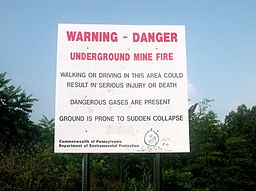 A warning sign outside Centralia, posted by the government of Pennsylvania.

The mine fire that makes this town stink like rotten eggs still burns today. Eventually, it could engulf 3,700 acres of anthracite coal deposit, open sink holes around the area, and cost hundreds of millions of dollars to contain. It’s not the only hell-town on the map, however. There are more than 200 coal mine fires burning actively in 14 states. And this massive coal fire in PA isn’t the only mine disaster in a city by the same name. One of the deadliest coal mine disasters since 1940 took place in Centralia, IL on March 25, 1947, killing 111 people. 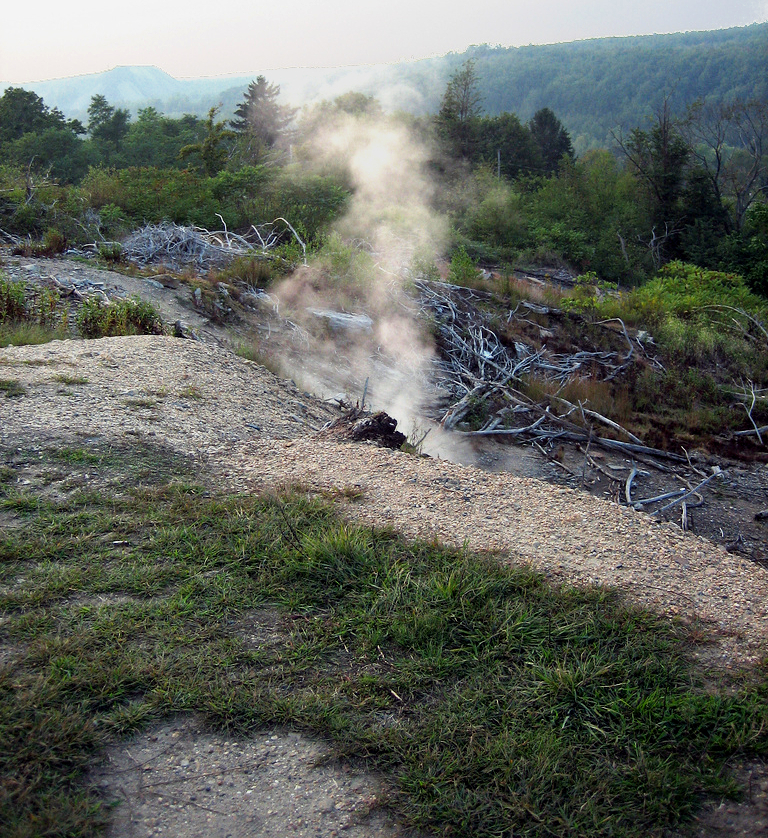 Toxic gas rising from the ground. Photo via Wikipedia.

Around the globe, thousands of mine fires rage. They leak toxic fumes into nearby settlements, open sinkholes, and contribute to global warming. They also claim hundreds of lives each year. Luckily, in the United States, the number of deaths per year from coal mining accidents is quickly dropping, and averages 45 per year. Just a few years ago, that number was closer to 1,000 yearly deaths.

Where the road ends…Route 61 terminates due to the mine fire. Photo via Wikipedia.

Centralia’s mine fire didn’t claim the lives of any miners working in the pits. They were already closed, thanks to decreased demand for anthracite. Economically and emotionally, however, it caused significant damage. Today, the town dwindles on the edge of extinction, with tourists and the occasional passerby stopping to see what remains. The state of Pennsylvania discourages visitors, warning that the area is dangerous and noxious gas poisoning, low oxygen levels, and mine collapse are real threats to those who do stop by.

The Future of Centralia, PA 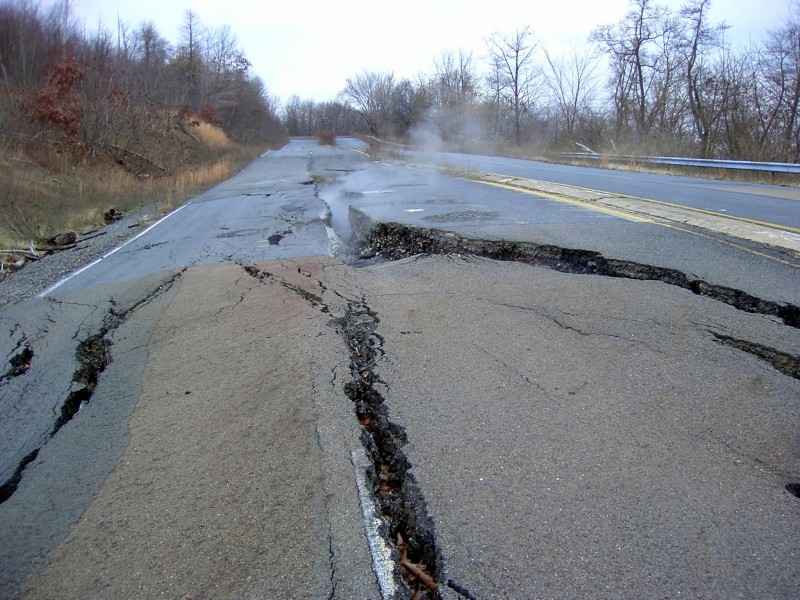 A highway outside Centralia buckles and cracks open as the fire rages below it.

Who would want to live in a town that could be described as the gateway to hell? You’d be surprised.

Until 1980, the population remained over 1,000. Die-hard Centralians with a passion for their community and their homes fought hard against the eminent domain proceedings that led to their evictions. The population dropped off sharply as it became apparent that the town was dying – in 1990, only 63 residents remained. Centralians weren’t happy to leave. They fought a hard battle in court, and a few residents still cling to their homes in the town. Centralia, sulfuric smell and all, is beloved.

Once a quaint coal town, Centralia’s anthracite mines were of little use after the 1950s shuttered most hard coal mines in the U.S. The old mines pits were used for dumping trash, and like many small coal towns around the country, residents knew mine fires were a real risk. On either May 27th or June 25th, 1962, depending on whose story you believe, the Centralia mine fire began in an old garbage pit outside of town.

Most sources agree that a controlled burn was the source;” and that improper preparation for and management of the fire eventually caused the demise of Centralia, Byrnesville, and at some point in the future, potentially Ashland, PA. The fire led to the eventual government takeover of the former town of Centralia, which lost its zip code in 2002. After lengthy court battles and public campaigns, a handful of residents were given permission to stay in Centralia until they die, when their homes will become the property of the state (and probably be demolished).

Nearby Byrnesville is already gone. The town was razed after the Centralia mine fire made it uninhabitable. Not too far away, Ashland sits waiting for its own turn to face the underground blaze. The city is now home to many former Centralia residents, the majority of which are skeptical or disapprove of the government’s handling of the fire. Some believe the government simply wants ownership of the vast anthracite deposits below what once was their town, while others disapprove of how the fire itself was (and is) addressed.

No matter how the fire is handled, it looks like Centralia will either remain a ghost town or be razed to the ground, while the fire underneath continues to burn for what some estimates claim will be another  250 years.

How the Centralia, PA Mine Fire Grew Out of Control 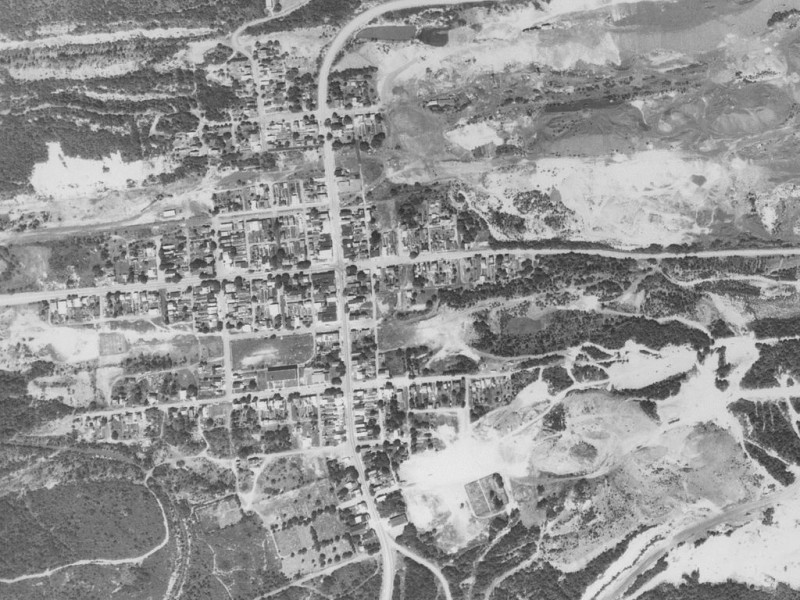 Centralia, PA in 1971, 9 years after the fire started burning.

A controlled burn doesn’t sound that bad. Firefighters were on the scene of the original pit burns that most likely led to the infamous mine fire. It shouldn’t have been too hard to keep conditions under control and prevent this disaster…so what happened?

In Centralia, the blame doesn’t rest on one person. Dozens of mistakes led to the end of this town.

Most likely, the fire started when controlled burns in the old open mine pits got out of control. There’s no excuse for that, since PA law had outlawed old mine pit fires in the 1950s due to the risks of coal seam fires, and underground fires had already caused damage in neighboring towns, some just a few miles away.

When the raging underground blaze was discovered, it wasn’t exactly handled well – at the local level, proposals that might have worked and involved measuring the distance the fire had already traveled were rejected, and rough estimates were used instead. Ooops – looks like they didn’t get those estimates correct.

On the state and federal level, the amount needed to put out the blaze was estimated at $663 million in 1983, so the US Congress put a little over $40 million towards relocating residents instead. In essence, they let the town be destroyed. To date, roughly $50 million has been spent on fire control and resident relocation through property condemnation and forced eviction.

Underground, the fire still rages. Smoke billows out from ventilation pipes, poisoning the atmosphere and anyone who is unfortunate enough to be hiking nearby. Like thousands of other mines fires around the globe, Centralia burns out of control and almost forgotten. The site has become a popular stop for photographers, film crews, and creative adventurers of all types.

It might be the closest thing to hell on Earth, but to the town’s former residents, Centralia is still home.

I'm a fan of honest words, clarity, and impact. A writer, editor, and translator, I spend my days guzzling coffee like a champ, living the expat dream, and being mom to world's sweetest preschooler. I’m co-owner and copywriting head at Rusmexus Writers, a history buff, and have a background in international relations.
0 POST COMMENT
NEXT ARTICLE
Manila, Philippines: Razed and rebuilt
September 16, 2015 - 3:48 pm
PREVIOUS ARTICLE
Tradition At Its Finest: Tokyo, Japan
September 12, 2015 - 4:07 pm