/ Attractions / Washington D.C.; The Capital of the World

Washington D.C. is filled with many sites that tell a story about the history of our great country. Whether you are traveling with a group or going solo, Washington D.C. is an exciting, one-of-a-kind destination to visit year round.
Brandon Speakman on December 24, 2018 - 2:44 pm in Attractions, Featured Cities, Historical, Places to visit

Things to do in Washington D.C.

Washington D.C. was founded on July 16, 1790 and was decreed the official capital of the United States by the Constitution. Washington D.C. has been involved in “political maneuvering, sectional conflicts and issues of race, national identity, compromise and, of course, power.” President George Washington himself decided on the land where Washington D.C. currently sits upon; along the Potomac and Anacostia Rivers.

Unfortunately, Washington D.C. was almost completely demolished by armed forces of Great Britain during The War of 1812. Many buildings were set on fire and burned to the ground including The White House, the Capitol, The Library of Congress, and its inventory of books. In 1815, Thomas Jefferson was able to replace the contents of The Library of Congress by selling his entire library for $23,950. 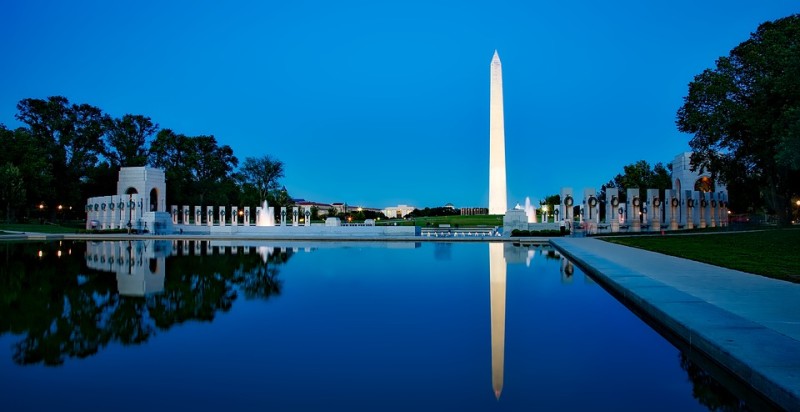 On April 16, 1862, all slaves owned in Washington D.C. were emancipated (nine months before The Emancipation Proclamation granted freedom to all slaves that lived in Confederate States.) Washington D.C.  quickly became populated with many freed slaves and eventually was largely occupied by African Americans, including Frederick Douglass. Today, Washington D.C. is known as a “culturally diverse city” filled with an abundance of history, museums and great restaurants. You’ll never have a dull moment during your visit to the Nation’s Capital. 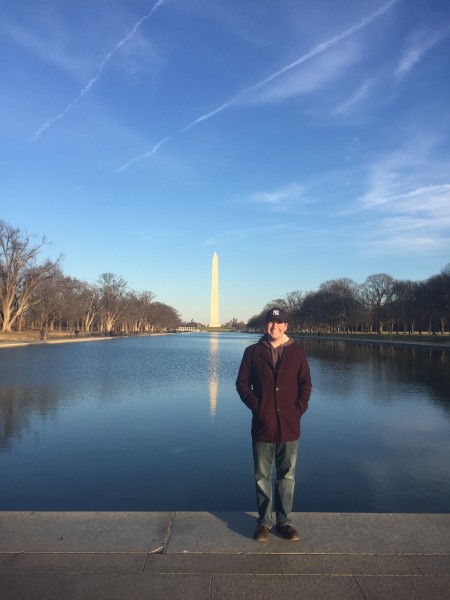 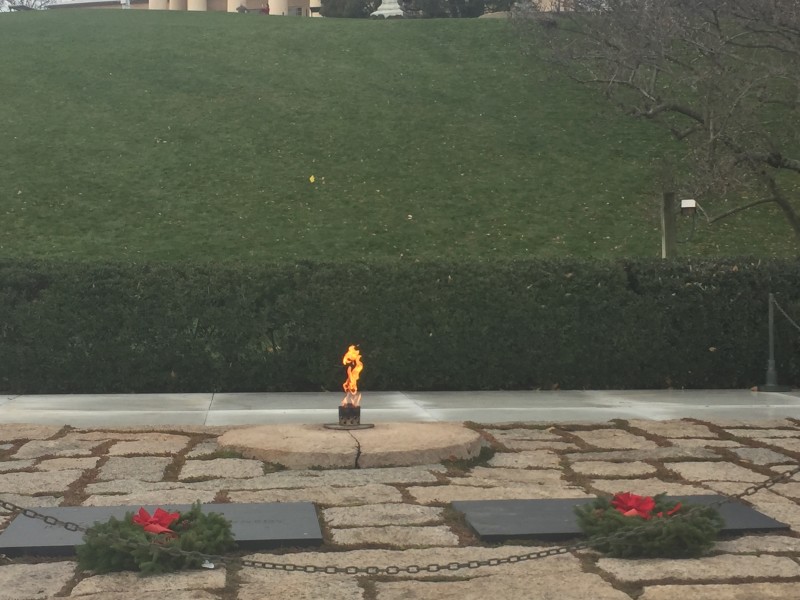 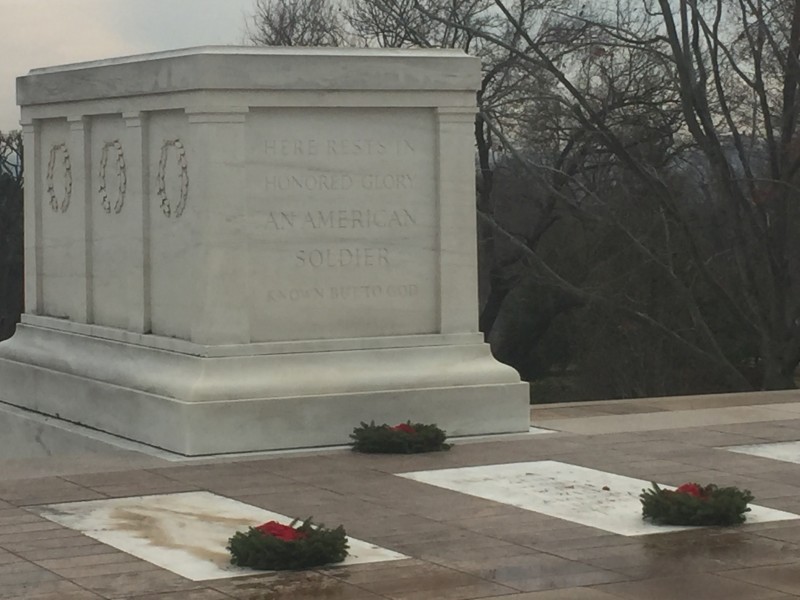 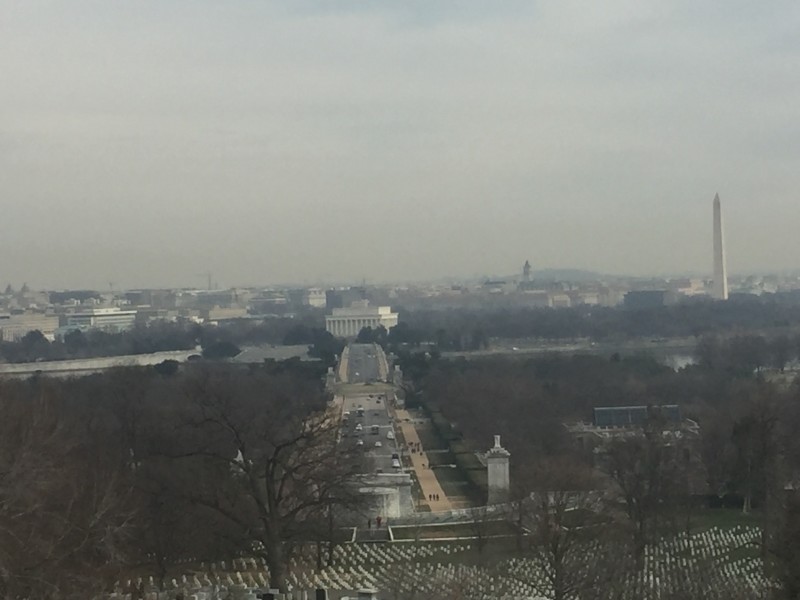 The view of Washington D.C. from Arlington National Cemetery

The Food of Washington D.C.

The Pig in Washington D.C. is a must-visit for lovers of all things pork. The Pig takes a sophisticated and fancy approach to bacon, which is something more states need, a fancy bacon-based restaurant. The official website of The Pig gives a more than accurate manifesto that reads; “The Pig is a celebration of pork and the whole animal. Our menu is dedicated to uniquely crafted, seasonal, and local food. Our menu is paired with American crafted cocktails, beer, and wine. We welcome our guests with great hospitality in a comfortable setting. Explore & enjoy the experience.”

The menu at The Pig is split up between Firsts, Mains and Sides. The first item listed on the Firsts section of the menu is an appetizer that was calling my name; Face Bacon, which is described on The Pig’s menu as a “fatty cut with rosemary maple and cognac mustard.” This bacon is exquisite. The fatty bacon slab is everything a piece of bacon should be. It’s crispy on the outside, but also melts in your mouth. The bacon is served atop the rosemary maple and cognac mustard, giving you a chance to coat your bite of bacon in the drizzle, before taking a bite. When that piece of bacon is equipped with the rosemary maple and cognac mustard and you take that first bite, it’s like heaven in your mouth. This bacon appetizer is a true work of art and I hope that all bacon lovers have a chance to taste it someday. 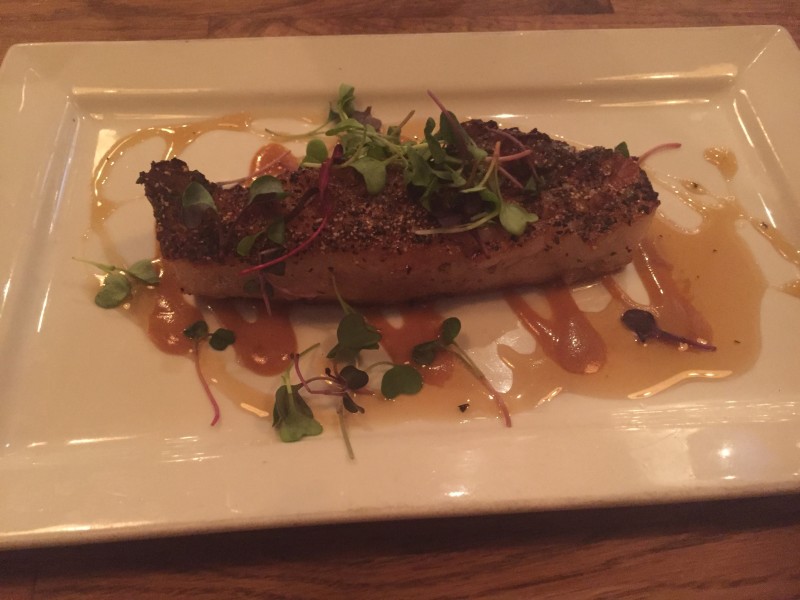 The ever so heavenly “Face Bacon” Photo Courtesy of Brandon Speakman

A notable item on the Mains section of the menu is the porchetta; sausage wrapped in pork belly with a crispy slice of bacon wrapped around the top of the pork belly, which sits on top bok choy and a wasabi potato puree and pork jus. The porchetta is a tasty main dish at The Pig. When eating at The Pig, everything seems like a treat, since it has something to do with bacon or another pork-based product, which makes the dining experience at The Pig a magical one. 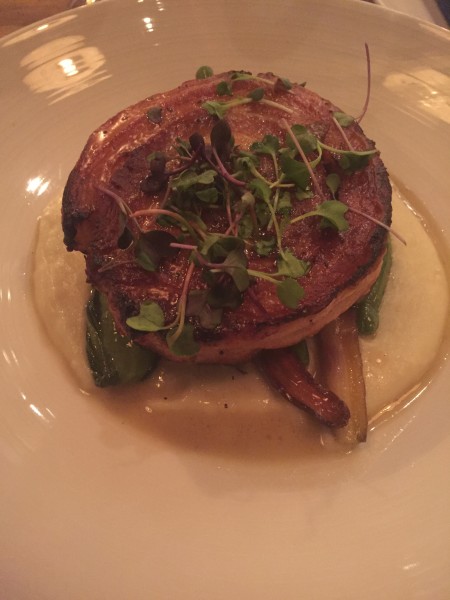 Porchetta at The Pig Photo Courtesy of Brandon Speakman

The Pig offers a lively ambience and is a great place to go if you’re looking for a unique dining experience in D.C. Or maybe you are just a die hard bacon fanatic, either one works.

I was searching for breakfast one morning in D.C. and a friend of mine recommended I try The Florida Avenue Grill. I don’t think I’ve ever had a quality, hot, delicious, filling breakfast for $6. All it took were Two World Famous Hot Cakes topped with cinnamon and sugar and a cup of coffee. Not only is the food top-notch, the breakfast prices are unbeatable.

The Florida Avenue Grill started as a dream for Lacey C. Wilson Sr., a shoeshine man living in Washington D.C. Wilson Sr. desired to open up a restaurant that “felt like home.” He wanted his restaurant to be a place where everyone who came to visit was friends with each other. Wilson Sr. dreamed to serve up a home-cooked, soul food meal at a cheap price. Most importantly, Wilson Sr. wanted to give African-Americans a place where they could sit down and enjoy a meal, without being harassed or discriminated against because of their skin color. In addition, Wilson Sr. wanted to create a restaurant where people with different economic backgrounds, religious beliefs and heritage could all come together and enjoy a meal with the company of those of a different walk of life.

In 2005, Imar Hutchins, an attorney and entrepreneur, purchased The Grill from Wilson Jr. Although Hutchins made some changes, he wanted frequent visitors of The Grill to know that it will always hold the same “loveable charm” as it did when Wilson Jr. owned it. Hutchins built a monument as a way to praise The Wilsons and “the historical significance of The Grill.” The monument that celebrates The Wilsons is the Lacey Condominiums, “an award winning 26-unit building designed by Ali Honarkar of “Divisions of Architects.” The Lacey Condominiums were built respectively on the Florida Avenue Grill’s former parking lot. It was important to Hutchins that The Grill and the Lacey “co exist together.” “Most developers would have wanted to tear down the Grill to get another couple of units, but to me it was important to preserve a critical part of DC history.”

While The Grill has seen its share of hardships, it has always been able to stay in business and serve its loyal D.C. customers for years. The Florida Avenue Grill has been able to “survive everything from natural disasters and recessions to the crack epidemic, crime waves and gentrification.” The Florida Avenue Grill is currently the oldest soul food restaurant in the world and continues to put a smile on the faces of every customer that passes through.

Visiting The Capital Grille on Pennsylvania Avenue in Washington D.C. is a delightful experience. While the menu at The Capital Grille can be a little pricey, there are still sections of the menu that offer cheaper selections, such as New England Clam Chowder, Soy Glazed Brussels Sprouts with Bacon, Au Gratin Potatoes, Parmesan Truffle Pies, Roasted Chicken or the Caesar Salad.

The Capital Grille also offers a full dessert menu that includes Crème Brûlée, a Flourless Chocolate Espresso Cake, Warm Fuji Apple Crostata with Vanilla Ice Cream, Chef’s Seasonal Fruit Sorbet and much more. The Capital Grille in Washington D.C. is a fun and delicious experience. You may want to call ahead to beat the dinner crowds, but other than that, bon appétit.

Washington D.C. offers tours of The White House, The U.S. Capitol, Bureau of Engraving and Printing, FBI Headquarters, Kennedy Center, Library of Congress, Supreme Court and State Department. Tours can be booked on the official website of the government branch/agency you would like to visit. 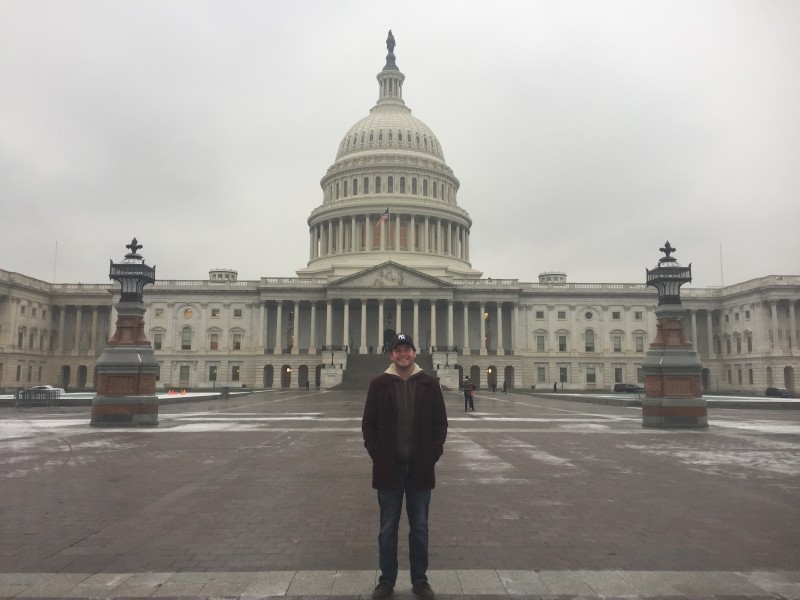 During my trip to Washington DC I had the opportunity to tour The White House, The U.S. Capitol and Kennedy Center. Seeing The White House all decked out for the holidays is a rare treat that I hope everyone can enjoy someday. Yes, it was very, very cold outside, but the decorations were all very tasteful and it was fun counting the hundreds of Christmas Trees that were sprinkled throughout The White House. 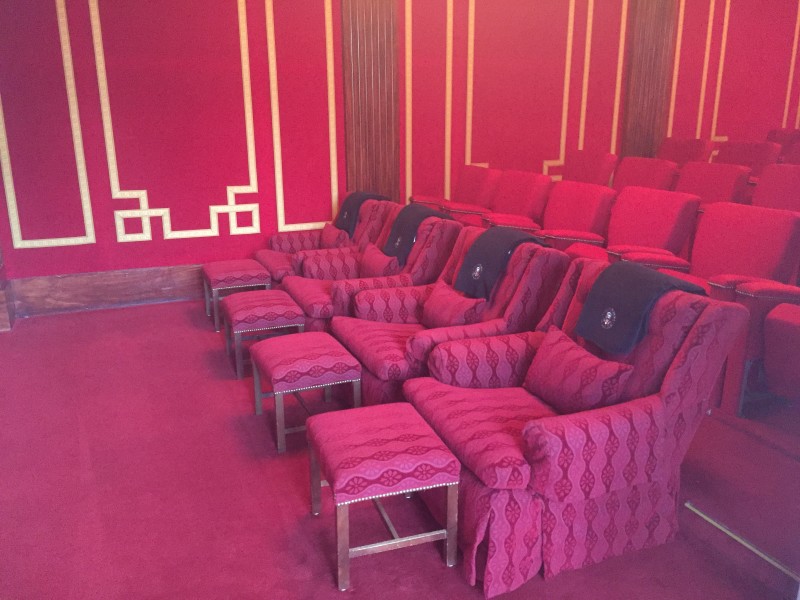 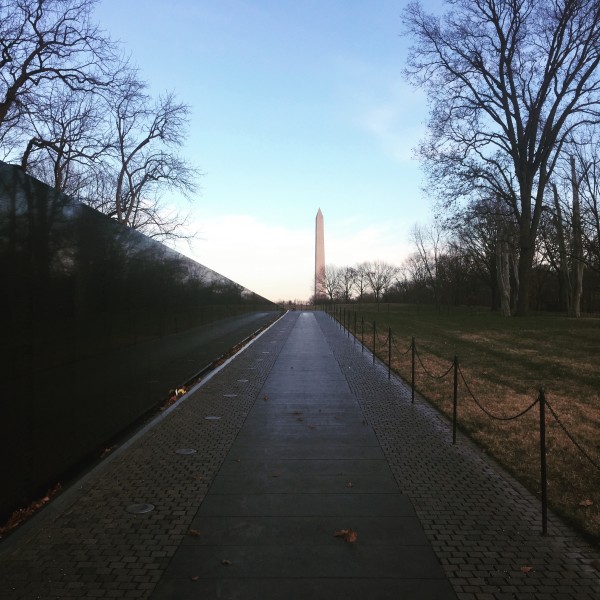 As a first-time visitor, Washington D.C. was hands down one of the most exciting places I’ve ever had the pleasure to visit and I cannot wait to go back, as I hear spring in D.C. is delightful. Touring The White House and seeing Arlington National Cemetery all decorated for Christmas was an added bonus and really added some charm as I walked through this marvelous city. To learn more about Washing D.C., check out the official tourism board website.