We don’t really know that much about the planet we live on. It’s been around for billions of years, but we didn’t realize it was more than a few thousand years old until the late 1700s. There’s one man who did as much for teaching us about the earth beneath our feet as finding out the world was round did for our thirst to explore. This is his story.

Born the son of a blacksmith and raised by his uncle, a farmer, perhaps it’s not really that surprising that William Smith grew up with a passion for the earth and the things that come out of it. As a kid, he was obsessed with fossils, and his love for them led to his discoveries about the strata beneath our feet.

Smith’s England was a strange place. He was a young boy when the United States declared its independence, and although that meant less money from the colonies for Great Britain, it was still an exciting time to be alive. For someone of Smith’s background, it was more exciting than most. He learned geometry and drawing among other subjects at his village school and then set out to make a living.

Smith became the apprentice of Edward Webb, an influential land surveyor, when he turned 18. In 1791, he set up his own surveying business. Smith was ready to make his mark on the world. The Industrial Revolution was just beginning. Life was about to change in a very radical way. 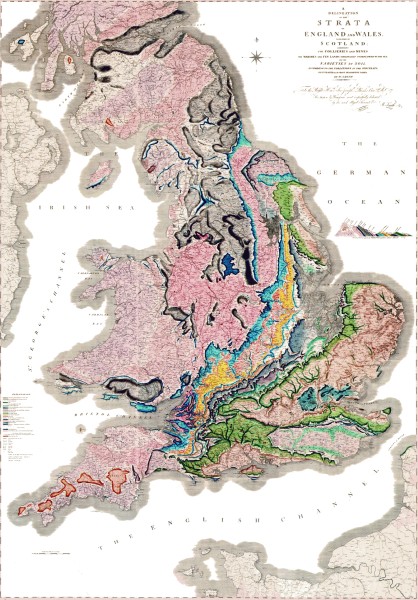 One of William “Strata” Smith’s maps.

By the time William Smith was a young man, he’d gathered more skills related to playing in the dirt. He was a trained surveyor, a decent artist, and good with geometry and mapping. He was also interested in the supervision of canal construction. That was a strong asset – as factory machines churned out products in unheard of quantities, they begged for one thing. Coal power. To find and transport that coal around England, surveyors were needed to identify coal deposits and canal construction. Smith had the right skills to get the job done.

In 1794, Smith toured all of England and eventually supervised the digging of the Somerset Canal in southwest England. It was a 6 year job that required Smith to closely examine the rocks where the canal was being dug. Smith was in heaven, paid to play with the dirt and study the different layers, or ‘strata.’ He made a major discovery while looking at the different fossils in those layers – that the same types of fossils were found in the same type of layer. That held true not just in Somerset, but in much of England. Singlehandedly, he changed how geologists examined layers of sediment…although it would take a few years before the Geological Society would accept his findings and give him the credit he was due.

Two years into his dream job supervising canal construction, Smith was elected to the agricultural society at Bath. He probed his idea of fossil-based layers, and found support for it among his colleagues. When “Strata” Smith, as he’s often called, finished his job supervising the canal construction in Somerset, he spent years walking thousands of miles to create a detailed geological map of England and parts of Wales using his new system of fossil strata. That map looks a lot like the one in use today.

William “Strata” Smith started as a boy with a love for dirt and the things he found in it. He went on to create the first version of modern stratigraphic maps – tools geologists still use actively to understand the earth beneath our feet.  Oh, and in his spare time he was also a biologist…

I'm a fan of honest words, clarity, and impact. A writer, editor, and translator, I spend my days guzzling coffee like a champ, living the expat dream, and being mom to world's sweetest preschooler. I’m co-owner and copywriting head at Rusmexus Writers, a history buff, and have a background in international relations.
0 POST COMMENT
NEXT ARTICLE
San Diego, CA: History of Paradise
November 25, 2015 - 9:52 am
PREVIOUS ARTICLE
The SS Edmund Fitzgerald and the Witch of November
November 11, 2015 - 5:47 pm