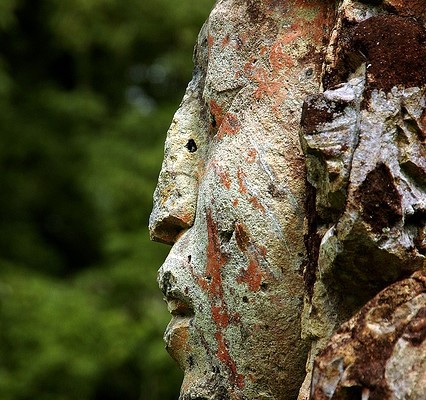 A visit to the best Mayan ruins in Central America including: Xunantunich, Copan, Chichen Itza, Lamanai and Tikal.
Joe Dorsey on March 20, 2014 - 3:34 pm in Historical, Places to visit

Want to see some of the best Mayan ruins?  Grab an antidiarrheal and let’s hit the old dusty trail.

The Ancient Mayan people were sophisticated beyond comprehension for their time, but sadly are most commonly associated with their “doomsday” prediction – which everyone knew was total bull. Either way, it came and went in 2012, and luckily for us, you can still see their amazing ruins to this day, and forget all about the horrible, horrible film.

The Mayans mainly occupied Central America, sometimes called Mesoamerica, around 2600 BC. That’s not “before Columbus” by the way – but it might as well be. You may be surprised to know that despite actually meeting Europeans, millions of Maya still live to this day and speak the language fluently. Much of the contemporary rural population of the Yucatán Peninsula, Chiapas (both in Mexico), Guatemala, and Belize is Maya by descent and in primary language.

If you’ve come looking for the best Mayan ruins, you’ve probably come for two things – incredibly high pyramids and carved stone slabs called stellae – which depict the rulers with their accomplishments (mostly blood letting).  Jade artifacts can be viewed in museums as well, showing signs of sophisticated tool work – which  maybe means deBeers swindled them too.

The Maya people existed before Spanish conquistadors arrived in the New World, but it is not widely understood why their agriculturally based civilization, which had produced written language, a calendar, art, and astronomy – collapsed.  Foreign invasion (white people?), exhaustion of resources, or drought may have been the cause. Severe drought may have caused this mostly peaceful culture to become a warring one. One study believes “a prolonged period of drought between 1020 and 1100 CE was ultimately fatal.”

So, here’s a list of the best ancient Mayan ruins to gawk at, and wonder how it’s possible a society so ancient can construct such massive and elaborate structures.

Fun fact: the Mayans understood a lot about medicine, and used enemas for more rapid absorption of drugs into the body.

My stomach gurgles just talking about this stuff. 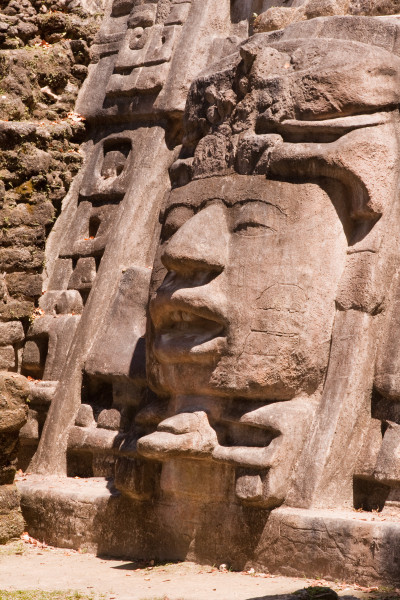 Where is it?: Northern Belize. Flights to Belize City.
What is it?: You can actually see this one in our Belize episode. Known as “Submerged Crocodile” Lamanai is accessible by 26 mile airboat ride through what archaeologist’s call an “epic crap-ton” of mosquitos.
Best known for: High Temple, Jaguar Temple, Mask Temple and a ball court where Mayans may have played soccer with human heads (maybe…maybe not.)
How do I get there?: Lamanai is accessible to tourists by organized day boat trips from Orange Walk Town along the New River, or by dirt and gravel road through the Mennonite area of Shipyard (yes, Belize has a Mennonite population). What’s up with that? 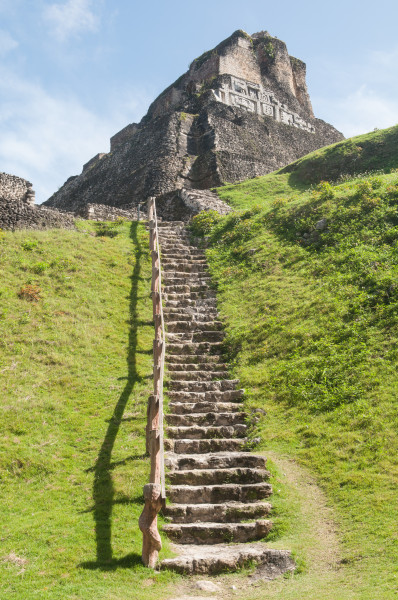 Where is it?:  80 miles west of Belize City, Belize.
What is it?: Translates to “Stone Woman” named after the ghost that supposedly inhabits the place.  Let’s not go at night and find out how “real” she is. Xunantunich is the most visited Mayan site in Belize.
Best known for: El Castillo, the second tallest structure in Belize (131 ft), is a pyramid which contains a “frieze” which depicts the birth of a god. Suck wind and see the Guatemalan border and jungle from the top.
How do I get there?: By tour, by bus, or by horseback (ride sidesaddle to impress the locals).

Where is it?: 25 miles south of Xunantunich, Belize. Flights into Belize City or Belmopan, Belize.
What is it?: “Snail shell,” Caracol is known as one of the most important regional political centers of the Mayan world.  It was over 125 miles wide and had a population bigger than modern day Belize City. Pretty wild when you think about it.
Best known for: 23 different stellae, 24 altars and 2 ball courts. Caana (“sky-palace”) is the largest building at Caracol. It remains one of the largest man-made structures in Belize.
How do I get there?: 4 Wheeler tour. Bring some aspirin. 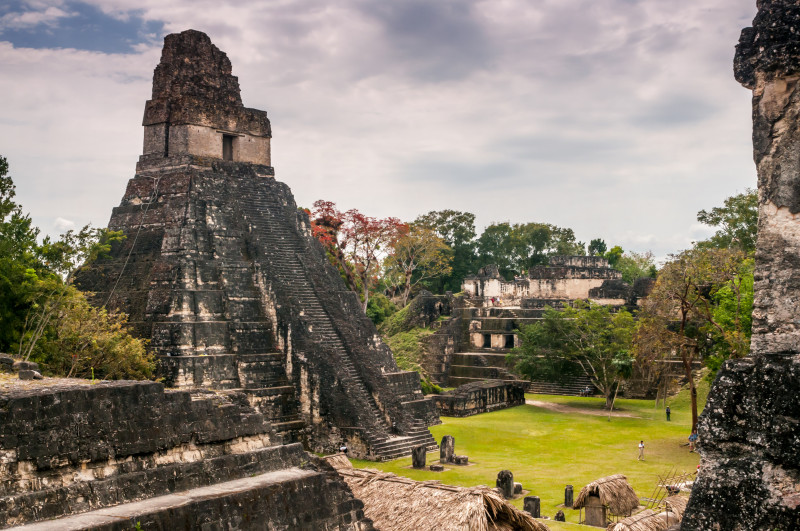 Where is it?: Northern Guatemala. Flights into Guatemala City.
What is it?: The capital of one of the most powerful ancient Mayan kingdoms. Tikal temple is 154 ft tall, and is probably what you think of when you think “mayan temple.”
Best known for: The giant Tikal temple, plus 70 stellae. George Lucas used Tikal as a backdrop for a scene in Stars Wars IV: More Deet.
How do I get there?: Tours galore.  Kalimaaaa….Kalimaaaa!

Where is it?: Western Honduras near the Guatemalan border. Fly into San Pedro Sula, Honduras.
What is it?:  If the Maya had a Paris, this is it. It’s clear that Copan is where the Mayan artist’s resided, as the artifacts here are more ornate and even colorful.
Best known for:  Some of the most highly detailed stellae, the jaguar heads, the hieroglyphic staircase, and the Rosalila temple – one of the most complete Mayan structures ever recovered. See the monkeys that just run along the ground.
How do I get there?: Take a tour or a bus.  The small town of Copan Ruinas is walkable. We stayed here while filming a production in Honduras, and it’s a great little town. It may even take your mind off the fact that you just came from the most violent city in the world. 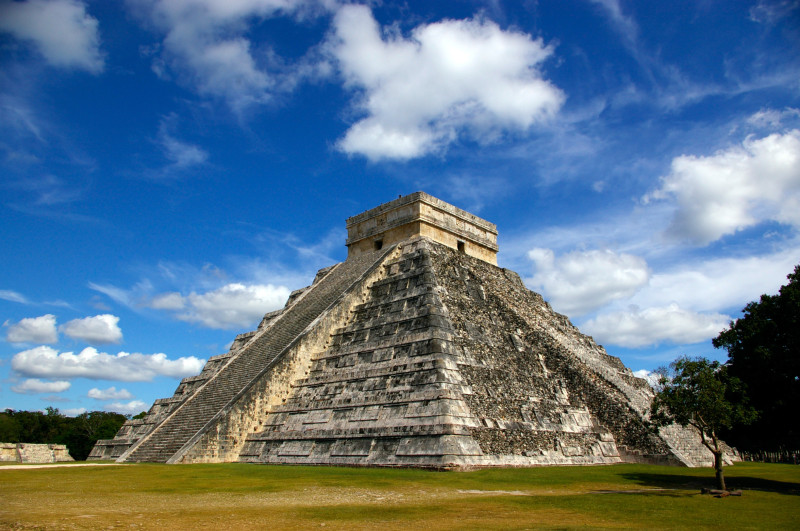 Where is it?: Yucatán Peninsula, Mexico. Flights or cruises into Cancún.
What is it?: “Mouth of the Well of Itza” – One of the largest Mayan cities which may be why the architecture is so diverse.  Chichen Itza was along a water route, so it was able to import non-local goods. The Spanish conquistadors encountered a thriving population near Chichen Itza when they arrived. And as conquistadors do, they eventually conquered the entirety of the Yucatán and established a capital there.
Best known for: Tons of tourists. El Castillo, the high pyramid. See the columns in the Temple of a thousand warriors.
How do I get there?: Tour bus, or stumble drunk from your cruise.  WOOOO, CANCUN!!!

So, there you have it. Some of the best mayan ruins sites of Central America.  Are there more? Tons more. This is just the tip of the spear with a beating heart on the end of it – so to speak.