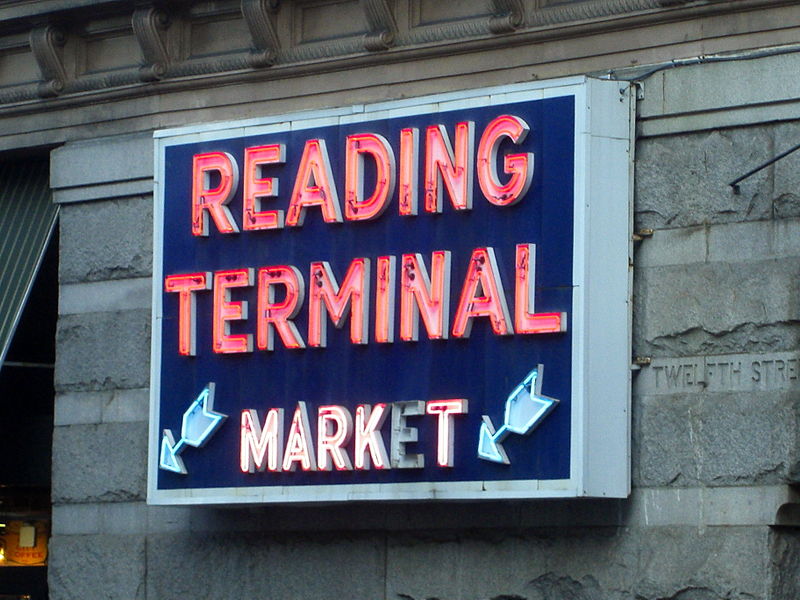 Today, Reading Terminal Market is a popular place that Philadelphia locals and tourists visit often. Every week, one hundred thousand Philadelphians and tourists make their way through the market to enjoy all the different products, history and people that the market has to offer. The Reading Terminal Market especially gets heavy foot traffic during the holidays. The market is home to over 80 merchants that sell local produce, fresh eggs, milk, meats, poultry, seafood, handmade crafts, jewelry, and clothing.

Tommy DiNic’s was named “The Best Sandwhich in America” by Adam Richman on his first episode of Best Sandwich in America (where it was up against Pittsburgh’s Primanti Bros. and New York City’s Katz’s Delicatessen) and is listed as the number one sandwich on “Philadelphia’s Sandwich Hall of Fame.”

It all started in 1918 when a man named Gaetano opened up a butcher shop in South Philadelphia called “Nicolosi’s.” Gaetano’s family lived above the butcher shop and eventually he raised his five sons to work with him in their family business. By the 1950’s, Gaetano had let his sons take over the business. Gaetano had been using a large oven, that was located in a garage behind his shop, to cook specialty roasts for his customers. In 1954, Gaetano’s four sons had the idea to sell roast pork and beef sandwiches out of the garage. These sandwiches received high praise from the neighborhood locals and quickly became in high demand.

In the early 1970’s, Tommy Nicolosi, one of Gaetano’s grandsons, decided to open up a sandwich shop with his cousin, Franky DiClaudio, at 10th & Oregon. They combined their last names to come up with the name Tommy DiNic’s. Business thrived for the cousins during this time and by 1980 they decided to split up. Franky opened up a location at 10th & Reed, while Tommy opened up a shop inside Reading Terminal Market. Tommy DiNic’s at Reading Terminal Market is in its fourth generation. Tommy still owns and runs the shop with his son, Joey.

Tommy DiNic’s is a sandwich you don’t want to miss out on when visiting Philadelphia. These tasty sandwiches have become well known for the close attention to detail and a commitment to using only quality ingredients and making everything from scratch. Whether you go for the roast pork, roast beef, the Italian sausage, hand-carved Italian pulled pork or the hand-carved brisket of beef, you won’t be disappointed. Tommy DiNic’s has received an abundance of praise from customers and the media and is always a hot spot during lunchtime. Tommy DiNic’s is open from 9a-6p Tuesday-Saturday and from 9a-4p on Sunday and Monday. 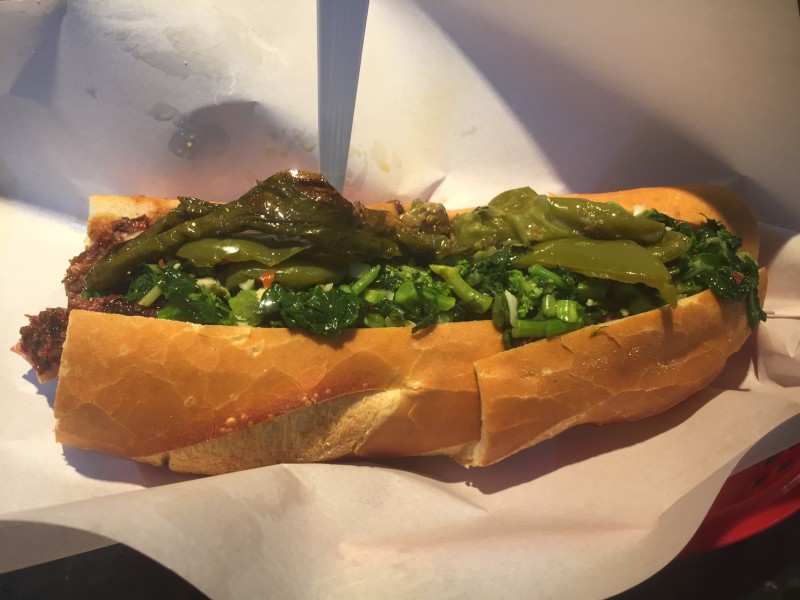 Hand-carved brisket sandwich, with the works (Provolone cheese, broccoli rabe and a mix of sweet and spicy peppers). Photo via Brandon Speakman

Wursthaus offers a wide variety of sausages such as, weisswurst, bratwurst and kielbasa, which all come with a side of potato salad, red cabbage and sauerkraut. Along with the traditional German cuisine of sausages and kraut, you can also try Wursthaus’ “hard-to-find cooked and cured meats” such as “leberkäse, gelbwurst, German-style bologna, and landjäger,” which Wursthaus describes as “smoky, snappy sausages.” 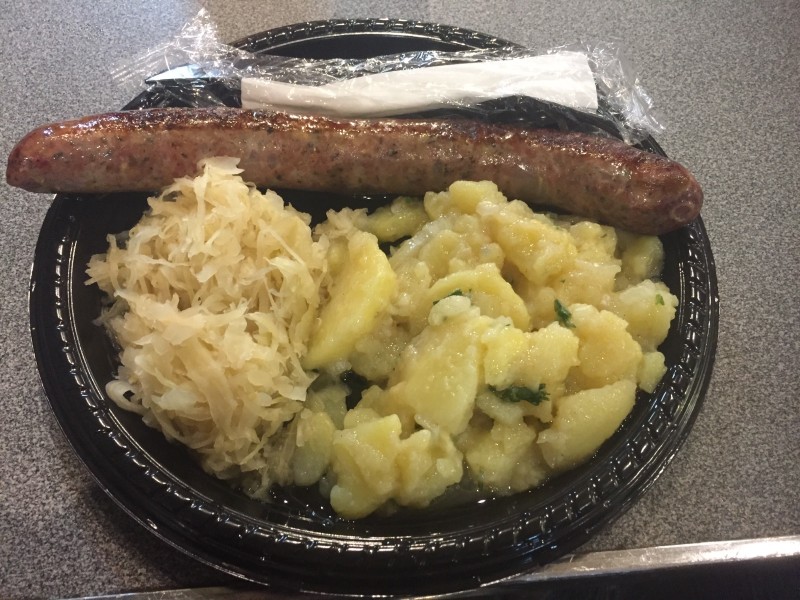 If you aren’t much of a sausage conisseruer, WurstHuas also offers an assortment of sandwich platters that “feature hot, crispy pork or chicken schnitzel, different sausages and meats and currywurst, which is pork sausage and curry ketchup, a popular Berlin street snack.” WurstHaus is also proud to sell their imported ingredients of smoked fish, various mustards and vinegars, as well as Haribo gummy candies and assorted chocolates.

Beiler’s Donuts and Salads is a popular Amish doughnut joint that prides itself on serving fresh and tasty doughnuts every day. You can’t go wrong with their diverse selection of flavors.

Beiler’s Doughnuts began over 30 years ago at Reading Terminal Market. Alvin Beiler (“an Amish-raised farmer from Lancaster County who married the Mennonite daughter of the first Pennsylvania Dutch merchant in the Reading Terminal Market”) has been cited as the mastermind behind this treasured bakery and even created the unique doughnut flavors that are in high demand daily by locals and tourist alike. Beiler’s Donuts “is still owned and operated by multiple generations of the same Pennsylvania Dutch family, who pride themselves on using recipes and baking techniques that have been passed down for hundreds of years.”

The menu at Beiler’s Bakery Photo via Brandon Speakman 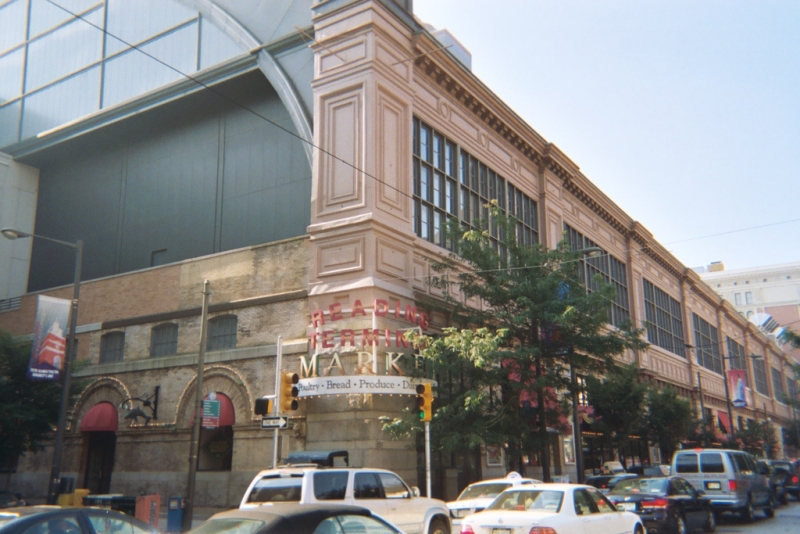