A look at the not-so-famous wars of American history you may have never heard.
Joe Dorsey on February 11, 2014 - 6:59 pm in Quick History

We’re all aware of the “popular” wars America has been involved with e.g. Vietnam, Korea, the World Wars, but the US has been in constant conflict around the world since 1776 (and before that if you count the French and Indian War.)

Let me also say that sadly the US government was in constant struggle with the Native Americans, and there’s SO many wars, I couldn’t list them all.  I spotlit a few below, but it doesn’t do it justice.

So, here’s a crash course on some of lesser known American conflicts you may not know about.

The Quasi-War (US vs. French Republic)

The Quasi-War was an undeclared war fought mostly at sea between the United States and the French Republic from 1798 to 1800. In the United States, the conflict was sometimes also referred to as the Undeclared War With France, the Pirate Wars and the Half-War. The US stops paying its American Revolutionary debt to the new French republic, saying they owed it to the crown, not the new nation. French privateers start attacking American merchant ships. 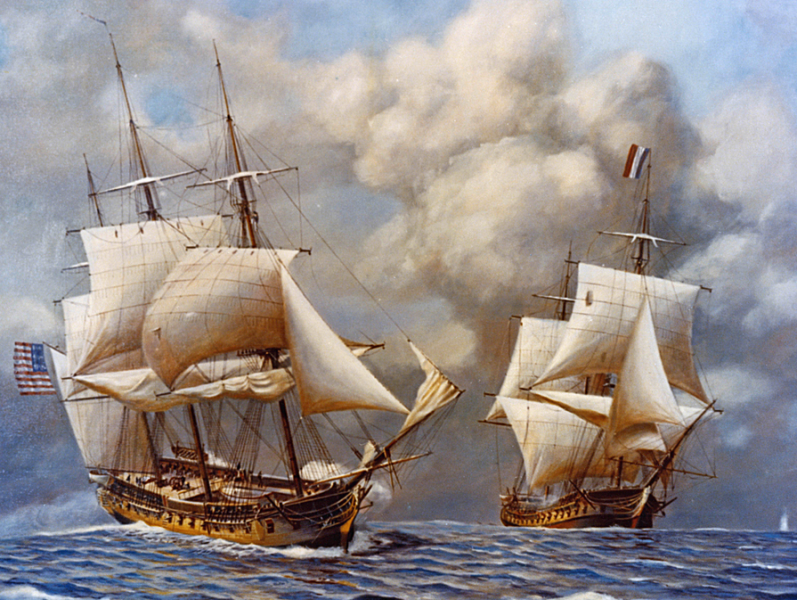 Sacreblue! The Quasi War was between the US and the New French Republic

Barbary Wars or Algerian War (US vs. Barbary States/Ottoman Empire)

The First Barbary War (1801–1805), also known as the Tripolitan War or the Barbary Coast War, was the first of two wars fought between the United States and the Northwest African Berber Muslim states known collectively as the Barbary States, nominally under the rule of the Ottoman Empire.[1] These were Tripoli, Algiers, and Tunis, which were quasi-independent entities nominally belonging to the Ottoman Empire, and the independent Sultanate of Morocco. The war was fought because U.S. President Thomas Jefferson refused to pay the high tributes demanded by the Barbary states and because they were seizing American merchant ships and enslaving the crews for high ransoms. It was the first declared war the United States fought on foreign land and seas.

The Seminole or Florida Wars (US vs. Florida Native Americans)

The Seminole Wars, also known as the Florida Wars, were three conflicts in Florida between the Seminole — the collective name given to the amalgamation of various groups of native Americans and the blacks who settled in Florida in the early 18th century — and the United States Army. The First Seminole War was from 1814 to 1819 (although sources differ), the Second Seminole War from 1835 to 1842, and the Third Seminole War from 1855 to 1858. They were the largest conflicts in the United States between the War of 1812 and the American Civil War.
The first conflict with the Seminoles arose out of tensions relating to General Andrew Jackson’s attack and destruction of Negro Fort in Florida in 1816. Jackson also attacked the Spanish at Pensacola. Ultimately, the Spanish Crown ceded the colony to United States rule. 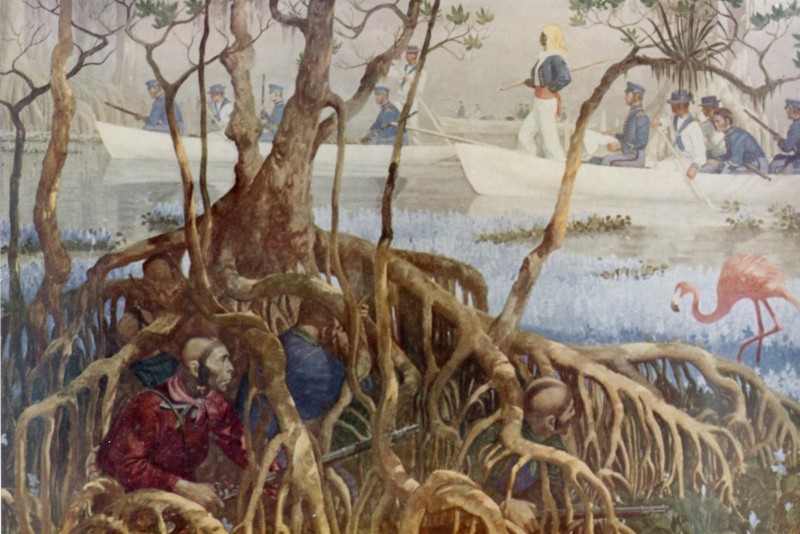 US Marines searching for Seminoles, plus a flamingo

The Mexican-American War (US vs. Centralist Republic of Mexico)

The Mexican–American War, was an armed conflict between the United States of America and the Centralist Republic of Mexico from 1846 to 1848 in the wake of the 1845 U.S. annexation of Texas, which Mexico considered part of its territory despite the 1836 Texas Revolution.

Combat operations lasted a year and a half, from the Spring of 1846 to the Fall of 1847. American forces quickly occupied New Mexico and California, then invaded parts of Northeastern Mexico and Northwest Mexico. The war ended in a victory for the United States.

The Treaty of Guadalupe Hidalgo ended the war: forced Mexican Cession of the territories of Alta California and New Mexico to the United States in exchange for $15 million. In addition, the United States assumed $3.25 million of debt owed by the Mexican government to U.S. citizens. Mexico accepted the loss of Texas and thereafter cited the Rio Grande as its national border.

The Cayuse War (US vs. Cayuse Tribe)

The Cayuse War was an armed conflict that took place in the Northwestern United States from 1847 to 1855 between the Cayuse people of the region and the United States Government and local Euro-American settlers. Caused in part by the influx of disease and settlers to the region, the immediate start of the conflict occurred in 1847 when the Whitman Massacre took place at the Whitman Mission near present day Walla Walla, Washington when fourteen people were killed in and around the mission. Over the next few years the Provisional Government of Oregon and later the United States Army battled the Native American peoples east of the Cascades. This was the first of several wars between the original inhabitants and Euro-American settlers in that region that would lead to the negotiations between the United States and Native people of the Columbia Plateau, creating a number of Indian reservations.

Utah War or Mormon War (US vs. Mormon Settlers of Utah)

The Utah War, was an armed confrontation between Mormon settlers in the Utah Territory and the armed forces of the United States government. The confrontation lasted from May 1857-July 1858 during a time of deep mistrust between the Mormon settlers the federal government. There were some casualties, mostly non-Mormon civilians, and the war had few notable battles, generally being resolved through negotiation.

Spanish-American War (US vs. Spain)

The Spanish–American War was a conflict in 1898 between Spain and the United States, the result of American intervention in the Cuban War of Independence. American attacks on Spain’s Pacific possessions led to involvement in the Philippine Revolution and ultimately to the Philippine–American War.

The result was the 1898 Treaty of Paris, negotiated on terms favorable to the U.S., which allowed temporary American control of Cuba, ceded indefinite colonial authority over Puerto Rico, Guam and the Philippine islands from Spain. The defeat and collapse of the Spanish Empire was a profound shock to Spain’s national psyche, and provoked a thoroughgoing philosophical and artistic reevaluation of Spanish society known as the Generation of ’98. The United States gained several island possessions spanning the globe and a rancorous new debate over the wisdom of expansionism.

First Marine Battalion lands on Guantanamo Bay, Cuba. Everything “Guantanamo” goes smoothly from here on out.

Not really a war, but worth noting. The Puerto Rican Nationalist Party Revolts of the 1950s were a series of coordinated armed protests for the independence of Puerto Rico led by the president of the Puerto Rican Nationalist Party, Don Pedro Albizu Campos, against the United States Government rule on the Island. The Party repudiated the “Free Associated State” (Estado Libre Asociado) status that had been enacted in 1950 and which the Nationalists considered a continuation of colonialism.

The Party organized a series of uprisings to take place in various Puerto Rican cities on October 30, 1950. The uprisings were suppressed by strong ground and air military force under the command of Puerto Rico National Guard Major General Luis R. Esteves.

In a related event, on November 1st of that year, two Nationalists from New York City attempted  to assassinate U.S. President Harry S. Truman, who supported the Puerto Rican government effort to draft a constitution that would rename the local government as a commonwealth of the United States and provide some limited local autonomy. The incident described as “the biggest gunfight in Secret Service history.” Truman later went to Puerto Rico where he made a speech absolving the island nation of any blame.

Co-creator of the Travel Thru History television series. Executive Producer at Infrared Creative.
0 POST COMMENT
NEXT ARTICLE
A Burning Desire to Visit Pompeii, Italy
February 13, 2014 - 7:25 pm
PREVIOUS ARTICLE
Asheville, North Carolina: History Any Way You Like it
February 7, 2014 - 8:21 am