/ Historical / Asheville, North Carolina: History Any Way You Like it

Asheville, North Carolina: History Any Way You Like it

What to do, where to stay, what to eat in Asheville, North Carolina: A history lover's guide.
Joe Dorsey on February 7, 2014 - 8:21 am in Historical, Places to visit

My family and I got a chance last year to visit Asheville, North Carolina.  The city made our radar upon hearing about its eclectic culture, local food scene, and nature hikes.  It’s got a reputation as that of the Portland of the East Coast.  It was a very cheap, short flight from our home in Orlando. So, that basically sealed the deal, because traveling with kids makes me anxious.

Asheville definitely lived up to the hype.  It’s got a great, little, vibrant, downtown that attracts major music acts.  Its culinary achievements are starting to become as recognized as those other Southern food heavyweights like Savannah and New Orleans.  The food, the drink, the nature, and the history is what we loved about Asheville.

Let’s get this out of the way.  You can’t talk about Asheville without mentioning the Biltmore, and frankly, that’s a good thing, because the Biltmore is amazing. As a fan of history, I knew we were doing this tour.  The Biltmore is the largest private home in the United States. To call it a mansion is not doing it justice.  It’s 178,926 square feet, has 250 rooms, a 70,000 gallon swimming pool, and an 8,000 acre backyard.  Built in 1889 by George Washington Vanderbilt II in chateauesque style, he called it his “mountain escape,” because he loved Asheville’s climate and terrain so much. During the depression, the home was opened to the public to bolster the families financial position, and it remains open to this day.  Over a million visitors per year visit the Biltmore, and we were one of them.  Photos and video are not permitted on the grounds (which is going to make taping an episode of Travel Thru History: Asheville, interesting), but A&E got in there, so you can watch their episode at least.  I did find some images on google though.

My family and I, with stroller in tow, battled the 250 rooms each with our own audio tour walkie talkie thing. The most impressive parts, for me, were the servants quarters.  For whatever reason, seeing how “the help” kept the home operating was fascinating. After fighting the stroller through one impossibly lavish room after another – which my kid could care less about (thank God for my iPhone) – we then toured the gardens. They’re beautiful and serene. Walking through the gardens is a chance to escape the “million man march” that is the procession through the home.

There’s so much to do here, check the Biltmore website for the details, but we wound up exploring the Antler Hill Village.  It’s got a winery, restaurants, and farmyard.  My wife drew the shortest straw and was the designated driver. So, I got to do the wine tasting, which was nice.  It’s not Napa Valley quality yet, but it’ll do.  The petting zoo was a hit with the kid, and by now, all I wanted to do was get back to our cozy airbnb home rental. Wine does that to me. Which leads me to…

Where to Stay in Asheville

My family and I stayed in a 3 bedroom rental home south of downtown that was awesome.  It was so nice to travel and have a separate bedroom from my son.  Asheville has a ton of full homes for rent at ridiculously low rates. We set up the video monitor, and with a full kitchen and two bathrooms, it felt like home.  We used a site called airbnb.com to do this – and this trip turned out lovely – but buyer beware with that site.  It’s like the ebay of vacation properties.  We’ve been burned before. Read reviews.  Singles might want to stay downtown for the bar hopping atmosphere. There’s some major brewery action going on downtown. Families will most likely settle just outside of downtown.

But you’re in Asheville so forget the traditional hotel and go old school.  Rent a real historic cabin in the woods, complete with flat screen TV, or stay in a historic bed and breakfast – you know – the type where the stairs probably creek, and maybe there’s a creepy door leading somewhere you’re not going to explore.

One of the most important parts of any trip with my family is the food. I know most people don’t give it a single thought, but we cherish the opportunity to explore the local food culture. Asheville is a big proponent of the locavore movement i.e. sourcing all your ingredients locally to preserve freshness and support the community. The restaurateurs have successfully combined their Southern heritage with farm-to-table philosophy, and birthed some amazing places to eat.

For breakfast we chose the Tupelo Honey Cafe.  I highly recommend you check this place out.  It’s kid friendly and crazy good.  THC’s claim to fame is one large buttermilk pancake flavored with cinnamon and sweet potatoes, topped with whipped peach butter and spiced pecans. My wife liked her meal so much, she bought the cookbook.

Downtown is where the the culinary scene is most vibrant.  For lunch we chose Chai Pani, a highly rated, all natural, hormone free, locally sourced, sometimes vegan, sometimes gluten free, yada yada Indian restaurant.  Yes, we took the child, and no, he’s not really into spicy food, but we packed something else for him, and again the iPhone, because I want you to enjoy your meal too.  You’re welcome.  It was some of the best Indian food we’ve ever tasted.

My wife is from Spain (Andalucia to be exact), so we love finding Spanish Tapas bars.  Asheville has them, so we went to Cúrate for dinner.  We sampled many things on the menu as one does at a tapas bar.  It was not pretentious at all, and my son even made a friend there.  Gambas al ajillo, patatas bravas, and setas al Jerez were all standouts.

Get Out for a Drive on the Blue Ridge Parkway

One cool thing we did was drive the Blue Ridge Parkway.  It’s crazy that one of most visited parks in the National Park System is a road, but you’ll understand it when you’re on it.  There are information centers along the road, as well as short hikes.  Check the website for road condition information though. While we were there, major sections were blocked off due to ice.  There’s a nice video on the official website and there’s even an app. If you’d rather not make the drive, this guy videotaped it with his camera hanging out of the window.

If scenic drives to noted geological hotspots are your thing (and we’ve established it’s mine), take the hour and a half drive out to Grandfather Mountain.  I went there when I was a kid, and I was psyched to be returning.

Grandfather Mountain at 5,946 feet is the highest peak on the eastern side of the Blue Ridge Mountains, a major piece of the Appalachians. There’s some unverified reports that the mountain has received some of the highest wind speeds ever recorded, over 200mph.

When I was a kid, I got car sick on the switch back roads headed up the mountain.  I wish I could find the photo. It’s the epitome of misery. This time I was driving, and my wife got nauseous instead of me. Secretly, I took this as a minor victory in my quest of overcoming previous embarrassments. Either way, once everyone was settled at the top, it was beautiful.  We had a picnic lunch at one of the rest stops up the mountain (again with an audio tour), and we walked across their new suspension bridge.  The old one, which I traversed as a kid, was way more scary than the new one.  In fact – looking back on it – I’m not even sure how that was legal. With the aforementioned wind speeds, a swaying bridge is not something you want to be on after your motion sick car ride and heavily mayonaise’d picnic lunch.

As a history lover, there may be more historical places to visit in North Carolina.  We’ve covered some on the show.  But Asheville offers a really nice paced vacation for the family, and a completely different climate and terrain than this Floridian is used to.  Whether you’re a jet setting newlywed couple or a “slow as molasses” family of four, Asheville’s history is there to enjoy – anyway you like it. 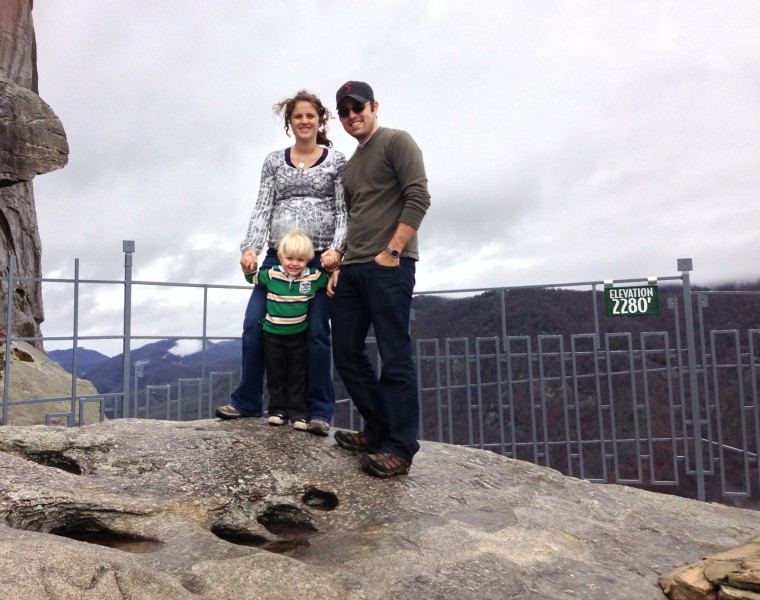 For more information on a trip to Asheville, North Carolina visit www.exploreasheville.com 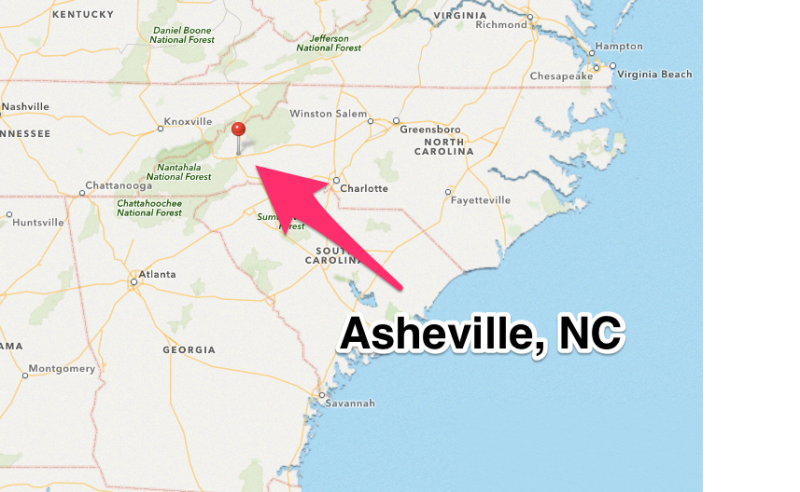 Co-creator of the Travel Thru History television series. Executive Producer at Infrared Creative.
1 POST COMMENT
NEXT ARTICLE
America's Forgotten Wars - From the Quasi War to the Puerto Rican Revolt
February 11, 2014 - 6:59 pm
PREVIOUS ARTICLE
The Miracle on the Hudson - The Incredible Story of Captain "Sully" and US Airways Flight 1549
February 6, 2014 - 7:05 pm