The full account of the Miracle on the Hudson. The expert flight of Captain Sully and the ditching of US Airways Flight 1549 - the most successful emergency landing in US aviation history.
Joe Dorsey on February 6, 2014 - 7:05 pm in Quick History

The “Miracle on the Hudson”

US Airways Flight 1549, an Airbus A320-214 was a US commercial passenger flight from LaGuardia Airport in New York City that struck a flock of Canada Geese during its initial climb, lost engine power, and ditched in the Hudson River off midtown Manhattan with no loss of life.

Here’s how it happened.

January 15th, 2009 – US airways flight 1549 from NYC to Charlotte is cleared for take off on runway 4 at LaGuardia airport.

There were 150 passengers and 5 crew members on board.

The pilot in command was 57-year-old Capt. Chesley B. “Sully” Sullenberger, a former fighter pilot who had been an airline pilot since leaving the United States Air Force in 1980. At the time of the accident, Captain Sullenberger had logged a total of 19,663 flight hours. He is also a safety expert and a glider pilot.

The first officer was Jeffrey B. Skiles, 49, who was on the last leg of his first assignment in the Airbus A320 since passing the training course to fly the type. The flight attendants were Donna Dent, Doreen Welsh and Sheila Dail.

At 3000 ft, just 3 minutes into the climb, the windshield turned dark brown and several loud thuds were heard. The engines failed.

“Hit birds. We’ve lost thrust on both engines. We’re turning back towards LaGuardia.” 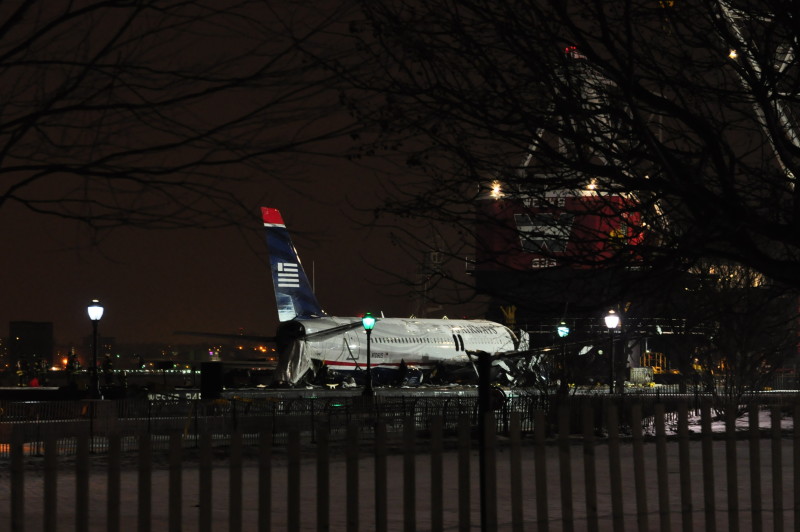 US 1549 barge at night
Photo courtesy of Karen Blumberg (Flickr)

Sullenberger then asks if he can land at New Jersey’s Teterboro airport. Air traffic gains access for him, however Sullenberger now replies “We can’t do it,” and his most infamous retort,

“We’re going to be in the Hudson.”

The aircraft passes just 900 ft above the George Washington bridge. The Captain announces..

The flight attendants chant “Brace!” to the passengers.

The plane ended its six-minute flight at 3:31 pm with an unpowered ditching at about 130 knots (150 mph) in the middle of the North River section of the Hudson River roughly near the Intrepid Sea-Air-Space Museum in Manhattan.

National Transportation Safety Board (NTSB) Board Member Kitty Higgins, the principal spokesperson for the on-scene investigation, said at a press conference the day after the accident that,

“It has to go down [as] the most successful ditching in aviation history. These people knew what they were supposed to do and they did it and as a result, no lives were lost.” – Kitty Higgins, NTSB

Immediately after the ditching, Sullenberger gave the evacuation order and the crew began evacuating the passengers onto the wings.

A panicked passenger opened a rear door which caused the aircraft to sink more rapidly. A crew member was not able to reseal the door.

Sullenberger twice walked the length of the cabin to confirm that no one remained inside after the plane had been evacuated.

The last passenger off, Dave Sanderson, who had assisted others in evacuating the craft, found no more room on the wing. Having no alternative, Sanderson jumped into the freezing river and swam to the nearest boat. The temperature was 20 degrees.

4 minutes after the ditching, ferries arrived and started rescuing passengers. The FDNY sent four marine units and rescue divers. On land, FDNY declared a level III (All Hands) emergency and mobilized their Major Emergency Response Vehicle, Logistical Support Units and had 35 ambulances ready for patients coming off the flight. 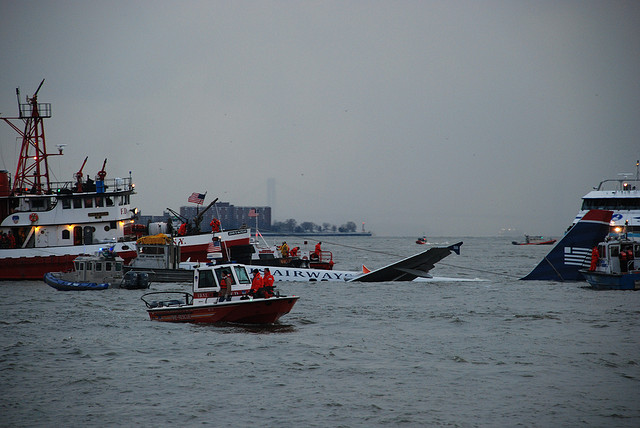 There were no casualties and generally minor injuries including lacerations and hypothermia. Panic attacks, flashbacks, and PTSD have been reported following the accident.

The passengers on the aircraft each received a letter of apology, $5,000 in compensation for lost baggage, or $5,000 more if passengers can demonstrate more than $5,000 in losses, and a refund of the ticket price. In addition, passengers reported they were offered $10,000 each not to sue US Airways for damages by American International Group (AIG), the airline’s insurance carrier.

To prevent similar incidents, officials descended on 17 locations across New York capturing and gassing 1,235 Canada Geese in June and July 2009. The Agriculture Department undertook another goose control measure by coating 1,739 eggs with corn oil, which kills developing goslings by depriving them of air.

Use of the flight number 1549 was discontinued from further use, as is the custom.

The Guild of Air Pilots and Air Navigators awarded the entire flight crew of Flight 1549 a Master’s Medal on January 22, 2009. The medal is awarded only rarely, for outstanding aviation achievements at the discretion of the Master of the Guild. The citation for the award is:

“The reactions of all members of the crew, the split second decision making and the handling of this emergency and evacuation was ‘text book’ and an example to us all. To have safely executed this emergency ditching and evacuation, with the loss of no lives, is a heroic and unique aviation achievement. It deserves the immediate recognition that has today been given by the Guild of Air Pilots and Air Navigators.”

Mayor Bloomberg gave the crew the Key to the City and the crew of flight 1549 were given a standing ovation prior to the start of Super Bowl XLIII.

The flight crew, particularly Sullenberger, were widely praise for their actions. NYC Mayor Michael Bloomberg declared it the Miracle on the Hudson. President George W. Bush and President-Elect Barack Obama expressed their gratitude and the whole crew was invited to attend his inauguration five days later.

Information from this article was sourced from Wikipedia.

miracle on the hudson Quick History us airways flight 1549

Co-creator of the Travel Thru History television series. Executive Producer at Infrared Creative.
0 POST COMMENT
NEXT ARTICLE
Asheville, North Carolina: History Any Way You Like it
February 7, 2014 - 8:21 am
PREVIOUS ARTICLE
A Quick History of the Olympic Games
February 5, 2014 - 6:36 pm