Fireworks, apple pie, barbecue…the 4th of July is one of the most popular celebrations of the year, and in the United States most of us only associate it with Independence Day. Around the world, however, July 4th is a day filled with history. You might just be surprised by some of the events that happened on this day…

Remember the movie 300? You know, the one about the insanely strong warriors called the Spartans? They got their butts kicked by the Thebans on July 4th, 362 BC in one of history’s most memorable battles. There was just one tiny problem…the Theban leader, Epaminondas (say that five time fast) was killed in the battle, so Thebes won the battle but lost the war.

Imagine how bad of a defeat it was – we’re still talking about it more than 2000 years later!

It’s not every day that you look up and the sky explodes…or every night, for that matter. In 1054, Japanese, Korean, Chinese, and Arab astronomers looked up to see a ‘guest star’ so bright that it was visible during the day for several months. The Crab Nebula was formed by this insanely powerful stellar explosion. That’s a little stronger than the fireworks display in my town; I don’t know about yours.

Some nations celebrate independence on July 4th, but others lost it on this day. The Treaty of Lancaster was signed on July 4th, 1848, and surrendered Iroquois lands to the colonial governments of Virginia and Maryland. It never hurts to remember that when someone wins, someone else loses. 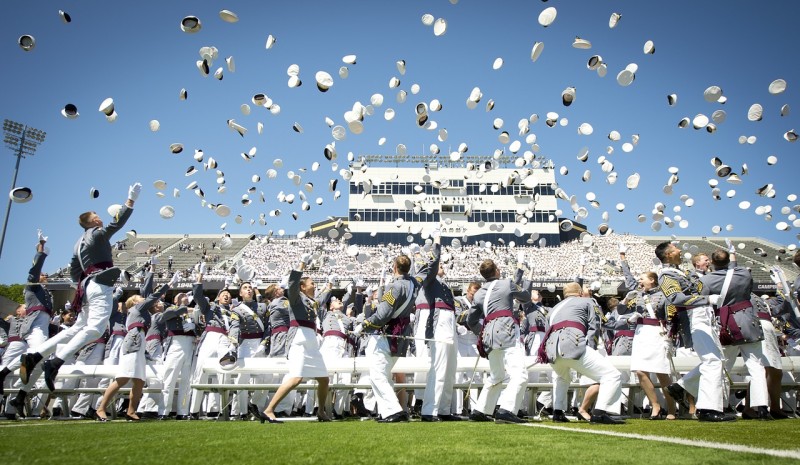 Graduation at the US Military academy, West Point, which was founded on July 4th, 1802.

One of the United States Military’s most famous academies, West Point opened its doors officially on July 4th, 1802. The school was founded by President Thomas Jefferson, based on the idea that military officers should also be well-educated “men of science” and thus “entitled to the notice of learned societies.”

When your best friends are Henry Wadsworth Longfellow and Herman Melville, chances are you’ve got a smidge of literary talent, too. Nathaniel Hawthorne wrote the book that gained as much fame for the color of a letter as Melville’s white whale gained for its own pale shade. The book was The Scarlet Letter. Of course, Hawthorne wrote other books and stories, as well, but that one book is among the most studied works in American fiction. And the author, of course, was born on the 4th of July, 1804.

Not one, not two, but THREE American presidents met their end on this day, and two in the same year. Maybe knowing that our nation had survived another year made it that much easier to rest in peace? Jefferson and Adams had more in common than their date of death and role as US presidents, however. The pair were both founding fathers and died 500 miles apart on the 50th anniversary of the signing of the Declaration of Independence, which bears both of their signatures.

This free day became that much more so in 1799, when slavery was abolished in New York. The journey to freedom wasn’t clear cut, however. The law indentured existing slaves until young adulthood and then extended their servitude until 1827. By 1840, however, there were no more slaves in New York.

8.      Alice’s Adventures in Wonderland is Created 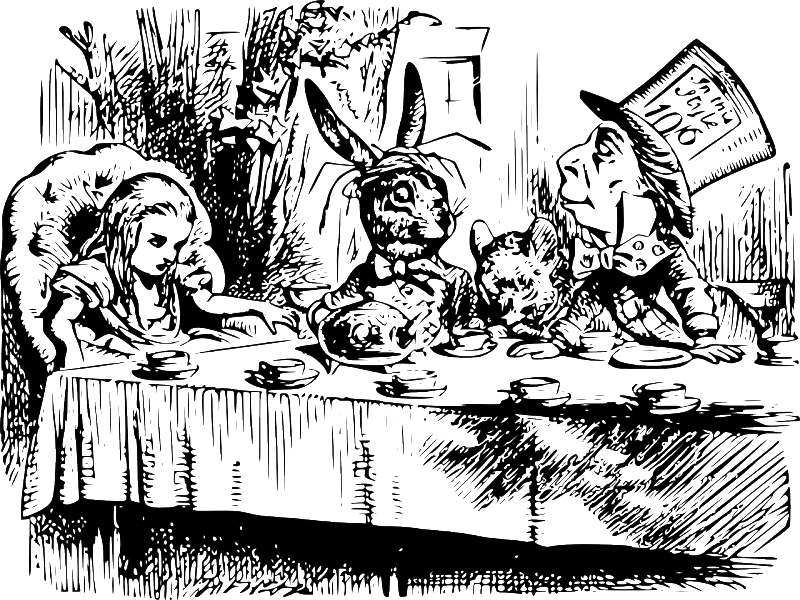 The Mad Hatter’s Tea Party in Alice’s Adventures in Wonderland.

Lewis Carroll’s most famous tale of a little girl who takes a rather startling series of adventures was first outlined on a boat trip to Godstow, on July 4th, 1862. Three years later, in the same month, it was published by Macmillan & Company. Today, you’ll find multiple movies, derivative works, and copies of the original book in homes around the world. Alice’s Adventures in Wonderland took her farther than Carroll (aka Charles Dodgson) may have ever intended.

With the authorization of House Bill 165, this famous educational institution was founded in 1881. A giant step forward for African-Americans, the institute continues to educate a racially diverse population. Its first principal was Dr. Booker T. Washington, and the school, once just for African Americans, was known as the Negro Normal School of Tuskegee, then as the Tuskegee Normal and Industrial Institute, and today as Tuskegee University. Despite its positive role in history as one of the first higher education institutions founded for African Americans, the school’s name is also marked by suffering, thanks to the unethical syphilis studies performed on the Tuskegee airmen from 1932-1972.

Thanks to Daylight Savings Time and some strange magic in the calendar, July 4th happened twice in one year for Western Samoans. There were two July 4ths and 367 days in 1892 in this island chain. A short 7 years later, part of the Samoan islands became a dependency of the US following the Treaty of Berlin.

On July 4, 1902, President Theodore (Teddy) Roosevelt declared the Philippine-American War over. That doesn’t mean the fighting ended, however. The Philippines were not keen on becoming a colony of anyone and fought hard to keep from becoming a part of the US. Fighting continued on several Philippine Islands for years after Pres. Roosevelt said the war was over.

Great careers often come to an end unnoticed, but not in Lou Gehrig’s case. He bowed out gracefully from baseball in a public goodbye on this day in 1939, just two weeks after his illness was made public.

Arguably one of the most beloved and prolific screen and stage writers, Neil Simon was born on July 4th, 1927. Simon doesn’t just write, however. He’s also an accomplished producer, and has acted and voiced roles, too. 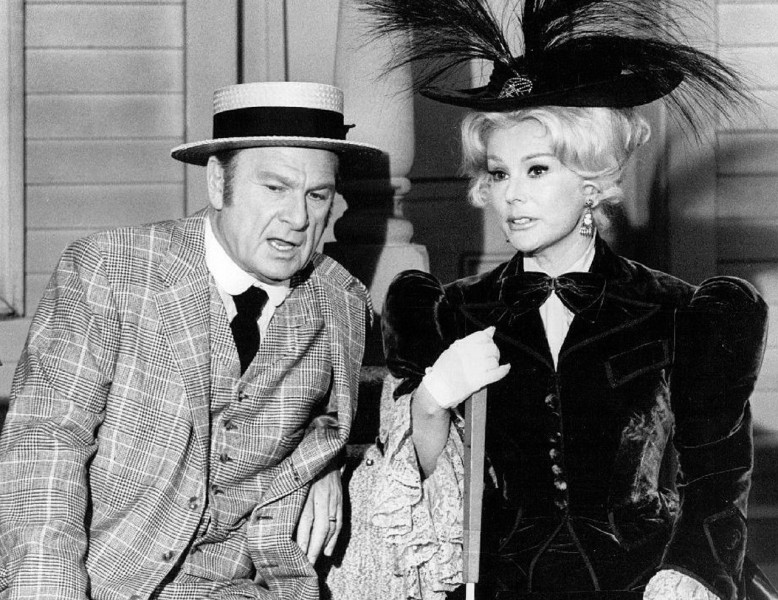 The sister of Zsa Zsa Gabor, Eva Gabor was a Hungarian-born American actress with a reputation as one of the most beautiful women in Hollywood. In film and on Broadway, she was a mega-hit, and played roles as varied as Liane from Gigi and Duchess from the Aristocats.

Eva made men drool and kids smile, but her light went out for good on July 4th, 1995.

Eva Gabor wasn’t the only celebrity to die on July 4th. Bob Ross was a legend, with his curly hair, beard, and the ability to paint anything outdoors with ease while making you feel both lousy and great by saying that you could do it, too. Sadly for those of us who’d love to learn how to effortlessly paint gorgeous landscapes, he died of lymphoma on July 4th, 1995.

Independence from taxation without representation, the British, oh, and the planet, too. At least, would-be Mars settlers would like to think that July 4th is one of the key days towards man’s potential future settlement of Mars. NASA’s Pathfinder probe landed with a well-protected thud on the nearby planet this day in 1997. Soon after, it sent pictures of the Red Planet to scientists and the space-curious of our potentially-colonizable neighbor.

17. Higgs Boson is Discovered at CERN

If you want to make a physicist giddy, mention the Higgs Boson particle. For ages, this little speck was just a theory, but on July 4th, 2012, it was finally found. Sometimes called the “God” particle, its size definitely doesn’t match the monumental impact its discovery had on the scientific community.

And not just America’s. July 4th is Liberation Day in the Northern Mariana Islands and Rwanda, and Republic Day in the Philippines. Now you know which islands to party on for the 4th!

I'm a fan of honest words, clarity, and impact. A writer, editor, and translator, I spend my days guzzling coffee like a champ, living the expat dream, and being mom to world's sweetest preschooler. I’m co-owner and copywriting head at Rusmexus Writers, a history buff, and have a background in international relations.
0 POST COMMENT
NEXT ARTICLE
5 Odd Facts About The White House
July 4, 2015 - 2:07 pm
PREVIOUS ARTICLE
7 Historical “Facts” That Might Be Fiction
June 17, 2015 - 12:59 pm