Malaysia is a hotspot for tourism thanks to its pleasant, tropical climate and fascinating culture. The city of Kuala Lumpur benefits from the tourist trade, but has a much humbler beginning. Chinese influence effortlessly blends here with modern Malaysian culture, and the result is as captivating and enchanting as it is bewildering.

A Brief History of Kuala Lumpur

A young city, Kuala Lumpur began as a tin mining settlement at the confluence of the Gombak and Klang rivers in 1857. Chinese tin prospectors and merchants settled the area slowly, and many died as a result of the difficult jungle conditions. At that point, the area was under British rule. The city was destroyed two times before 1900, by fire and civil war. In its early days, brothels, casinos, and saloons were a thriving industrial sector, as miners looked for comfort and relaxation.

Yap Ah Loy, one of the founders of modern Kuala Lumpur along with Frank Swettenham. Photo via wikipedia.

Sir Frank Swettenham played a vital role in lifting Kuala Lumpur from the status of a rough frontier town to the capital of Malaysia. Resident of Selangor, he ensured the city’s prosperity and growth, and was eventually placed in charge of the newly formed Federated Malay States in 1896.

The city was occupied in World War II by the Japanese for a little over two years. During that time, the ethnic Chinese were treated poorly and all English and Chinese schools were closed. The ethnic Malay and Indians were treated well, however. Food rationing was common during the war. After the war, the British regained control of Kuala Lumpur, but Malaysia’s independence was soon granted, with the first elections in 1952. In 1957, the Malaysian flag was flown for the first time in Kuala Lumpur’s Merdeka Square. Today, Kuala Lumpur is no longer part of the state of Selangor. It is located in the Federal Territory, and still serves as the nation’s capital. Within Kuala Lumpur, Muslims, Buddhists, and individuals of all walks of faith share the city in peace. Numerous ethnic groups and their varied histories of the city weave together to create one of Asia’s top ten cities.

What to Visit in Kuala Lumpur

Kuala Lumpur is home to many famous and notable sights, including the National Mosque of Malaysia – one of the largest in Central Asia – the KL Tower, and the Sultan Abdul Samad Building. The architecture here is an interesting blend of East and West, and there’s more than enough to see.

The three main Batu Caves are popular tourist destinations, especially for Hindu visitors. They contain Hindu shrines and temples, as well as paintings of Hindu gods. Around the caves, monkeys and other wildlife freely roam and you’ll catch a breathtaking view by taking a quick walk up a flight of 272 stairs.

One of the most popular tourist destinations in Malaysia, Kuala Lumpur’s Petronas Towers were completed in 1999 and stand an impressive 88 stories above the city. A 58.4-meter long skybridge links the two buildings at a height of 170 meters. Each tower includes 29 high-speed double-decker elevators. Traveling between 3.5 and 6 meters per second, the elevators are impressively quick. Just one hour outside of Kuala Lumpur, this massive resort complex was the result of an entrepreneur’s vision in 1965. Today, it is home to over 70 dining facilities, 5 hotels – including one that held the record as world’s largest from 2006-2013, and a 2.1-mile long cable car system that holds the title as World’s Fastest Mono Cable Car System. Known as the City of Entertainment, you’ll find 24 theme park rides, shopping, 4 performance venues, and Malaysia’s only legal land-based casino here. Views of the surrounding area are stunning, and the resort is only ten minutes away from the Chin Swee Caves Temple, which towers 4600 feet above sea level.

Opened in 1963, this museum includes four main chambers that are dedicated to the ethnographic history and national history of Malaysia. It was built on the site of the former British-controlled Selangor Museum, and the artwork on the building itself is as notable as the collections it houses. The museum grounds also house external exhibits, like an original wooden palace and the occasional temporary exhibit. 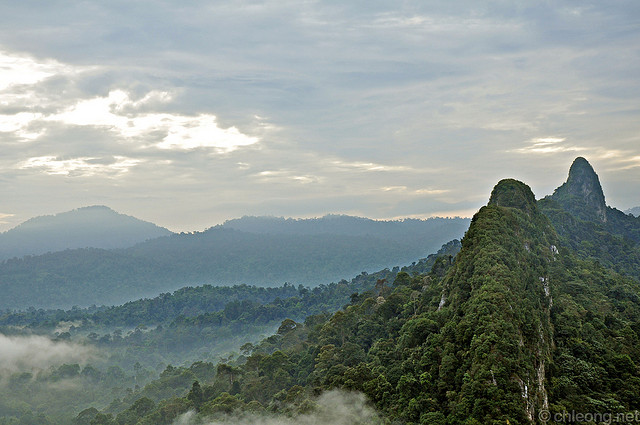 Part of the oldest quartz ridge in the world, this 500-meter-high hill is not a tough climb for experienced trekkers on the western slope, but its eastern face is difficult. Several sections are too challenging for inexperienced hikers, and fatal slips and falls aren’t anomalous in the history of this Kuala Lumpur area climb.

Why mention it if it’s so dangerous? Because the views are astounding. Situated near a large dam that supplies water for the region and with impressive vistas of both Kuala Lumpur and the nearby dam, it’s worth the trip. Just be careful, stay alert, and make sure to follow all safety procedures. It’s not a long climb (3-4 hours), but be prepared for extremely thin trails, scrabble, and ridge areas where rope is a necessity.

Where to Eat in Kuala Lumpur

The unique blend of Indian, Malay, Chinese, and British cultures that make up Kuala Lumpur create a blend of flavors that are exotic, enticing, rich, and delicious. Malaysian street food is an art form, and definitely worth trying, but if you are in the mood for a meal indoors at one of Kuala Lumpur’s many restaurants, check out these two options:

The kitchen in Precious Old China is run by Nyonya Chef John Locke, but the flavors are far from British. You’ll find a decadent blend of Malaysian and Chinese cuisines in this eatery. The ambiance is equally delightful. The restaurant is located above the historic Central Market, and is complemented by numerous cultural artifacts. Precious Old China prides itself on being a cultural refuge for the heritage of the Chinese community of Kuala Lumpur, and their lifestyle – something that is quickly disappearing.

Historically, one of the most popular street food dishes in Malaysia is Nasi Kandar, or “Rice Yoke”. This type of dish has its origins in the Indian Muslim community of the area, and is characterized by fragrant aromas, curry spice, vegetables, fried fish, chicken and beef. Its name also tells of the dish’s history – it was once carried through the streets by vendors carrying a yoke, from which hung the pots of freshly made nasi kandar. Over time, those street vendors opened stalls along the roadside, and you will still find many in business today.

If you’d like to sit down and sample Malaysia’s traditional flavors, you’ll have a hard time. Many restaurants offer a blend of flavors that is uniquely Malaysian, but not many give you the option of ordering the foods that are so wildly popular in street stalls. Of those that do, Nasi Kandar Pelita stands above the rest. It started in 1995 as a street stall, but quickly became so popular that it purchased a neighboring café, and today is one of the most popular chain dining facilities in Kuala Lumpur.

Are you going to Malaysia soon? Planning on a trip to Kuala Lumpur (or have you already been)? Tell us all about it in the comments, and don’t forget to share the article!

I'm a fan of honest words, clarity, and impact. A writer, editor, and translator, I spend my days guzzling coffee like a champ, living the expat dream, and being mom to world's sweetest preschooler. I’m co-owner and copywriting head at Rusmexus Writers, a history buff, and have a background in international relations.
0 POST COMMENT
NEXT ARTICLE
Vilnius, Lithuania - A Baltic Beauty
May 18, 2015 - 7:39 pm
PREVIOUS ARTICLE
Belgrade, Serbia: Electricity, history, and culinary delights
April 9, 2015 - 7:04 pm