We got a chance to shoot a segment at the Pinball Hall of Fame in 2013.  The segment runs in our “Odds and Ends” clip show (episode 209), because we weren’t able to get it into our Las Vegas Show (episode 102.)

Las Vegas is chock full of attractions vying for your attention, but just off the strip there is a gold mine for all those classic video game and pinball aficionados of the world. It’s called the Pinball Hall of Fame, and the collection of playable games here is outstanding. At 10,000 square feet, the Pinball Hall of Fame is the world’s largest collection of pinball machines and is a charity.

Tim Arnold is the man behind the madness.  He titles himself the “director of stuff and things.” He’s managed to bring in pinball games from the 1950s to the 1990s.  Most of the machines cost only a quarter to play, and you can amuse yourself for hours. The facility also houses some classic video games as well.  They even have some engineering models that were never supposed to see the light of day.

The History of Pinball

“In 1869, British inventor Montague Redgrave settled in the US and manufactured bagatelle tables in Cincinnati, Ohio. In 1871 Redgrave was granted US Patent #115,357 for his “Improvements in Bagatelle” another name for the spring launcher that was first introduced in billard Japonais. The game also shrank in size to fit atop a bar or counter. The balls became marbles and the wickets became small metal pins. Redgrave’s popularization of the spring launcher and innovations in game design are acknowledged as the birth of pinball in its modern form.

By the 1930s, manufacturers were producing coin-operated versions of bagatelles, now known as “marble games” or “pin games.” The table was under glass and used Billiard Japonais’s plunger device to propel the ball into the upper playfield. In 1931 David Gottlieb’s Baffle Ball became the first hit of the coin-operated era. Selling for $17.50, the game dispensed five to seven balls for a penny. The game resonated with people wanting cheap entertainment in a depression-era economy. Most drugstores and taverns in America operated pinball machines, with many locations quickly recovering the cost of the game.

In 1932, Gottlieb distributor Ray Moloney found it hard to obtain more Baffle Ball units to sell. In his frustration he founded Lion Manufacturing to produce a game of his own design, Ballyhoo, named after a popular magazine of the day. The game became a smash hit. Its larger playfield and ten pockets made it more challenging than Baffle Ball, selling 50,000 units in 7 months. Moloney eventually changed the name of his company to Bally to reflect the success of this game. These early machines were relatively small, mechanically simple and designed to sit on a counter or bar top.” [Source: Wikipedia] 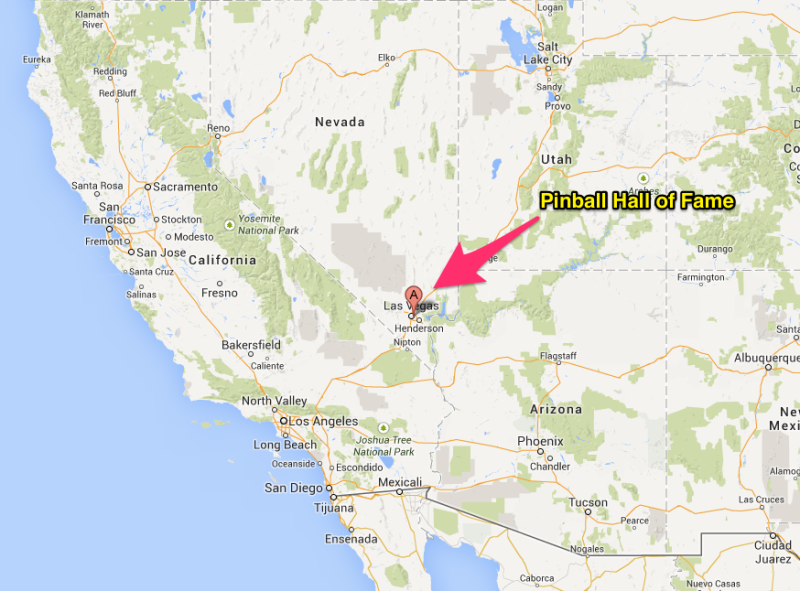 So, if you need to getaway from the bings, bongs and beeps of the slots….well maybe you should go to Hoover Dam. But if you love pinball, this is the place to visit while in Las Vegas. Bring the whole family.

For more information on the Pinball Hall of Fame visit www.pinballmuseum.org

Co-creator of the Travel Thru History television series. Executive Producer at Infrared Creative.
0 POST COMMENT
NEXT ARTICLE
And You're Off - To Louisville, Kentucky - Episode 204
January 26, 2014 - 3:25 pm
PREVIOUS ARTICLE
Bienvenido a Miami! A Historical Journey from Natives to Latinos - Episode 201
January 20, 2014 - 5:28 pm