The Discovery Continues in Missoula, Montana 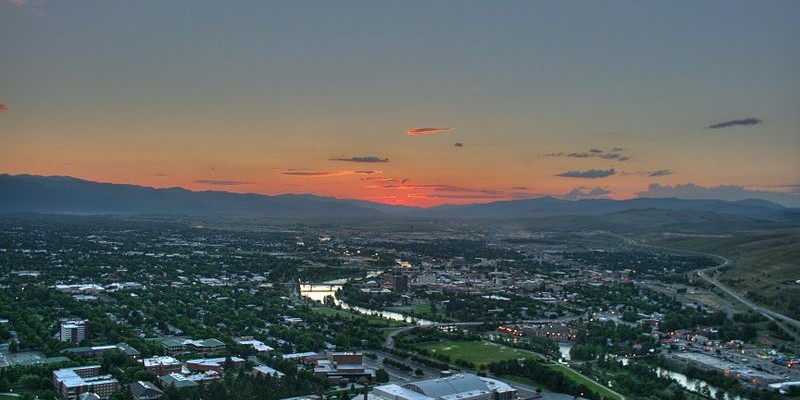 Missoula, Montana is a beautiful western city that is rich in history, full of family-friendly restaurants and home to Rocky Mountain Elk. Missoula is a fun family vacation destination to visit throughout the year.
Brandon Speakman on May 12, 2020 - 2:10 am in City Spotlight, Featured Cities, Historical

Things to do in Missoula, Montana

Missoula, Montana is a laid back city in the western United States. Missoula is home to some top-notch U.S. history and a few rather peculiar attractions. Missoula is a nifty city to explore and makes for a great summer getaway.

Missoula, Montana’s earliest settlements date back to 350 BCE (this is known by the findings of archeological artifacts.) Missoula was mainly inhabited by the Salish, Kootenai, Pend d’Oreille, Blackfeet, and Shoshone, from the 1700s until the 1850s. Missoula was traveled a lot by local and distant native tribes (as it was the meeting point for five mountain valleys), who would go to the Eastern Montana plains in search of bison. Many travelers were ambushed while passing through the narrow valley at Missoula’s eastern entrance and lots of bones were left behind after the ambushes. French fur trappers started to refer to the narrow valley as Porte de l’Enfer, which translates to “Gate of Hell.” The town was known as Hell Gate, until the name was changed to Missoula in 1866. 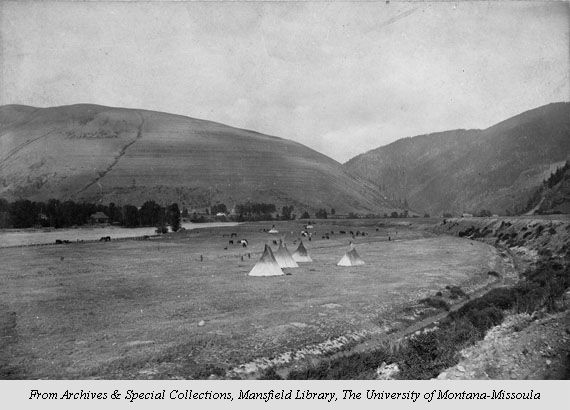 The Lewis and Clark Expedition marked the first time U.S. citizens traveled the area of Missoula. The Lewis and Clark Expedition stopped south of Missoula at Traveler’s Rest to set up camp during their westbound trip in September 1805. They returned to the area between June and July of 1806. Clark traveled south and explored along the Bitterroot River, while Lewis explored north, then east through Hellgate Canyon. While Lewis and Clark were among the first to explore Missoula, it was Christopher P. Higgins and Frank Worden who would establish Hellgate Village in 1860.

Hell Gate Village was formed 5 miles west of present-day downtown Missoula. Hell Gate Village was set up to serve as a trading post for travelers who trekked through Mullan Road, “the first wagon road to cross the Rocky Mountains to the inland of the Pacific Northwest.” Settlers eventually moved to present-day Missoula in 1864, as they were searching for a location with a more convenient water supply that would power both a lumber and flour mill. The Missoula Mills eventually became an economic powerhouse for Missoula, replacing its preceding powerhouse, Hell Gate Village. 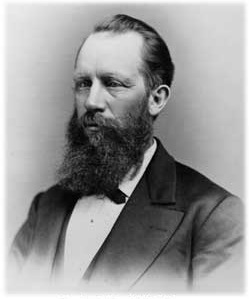 The name “Missoula” derived from the Salish name for the Clark Fork River, “nmesuletkw.” The name “nmesuletkw” roughly translates to “place of frozen water.” Fort Missoula was founded in 1877, as a way to give settlers arriving to the area protection and shelter. Missoula’s population flourished in 1883, when the Northern Pacific Railway arrived to the town. Later on in 1883, the Town of Missoula became a charter city. 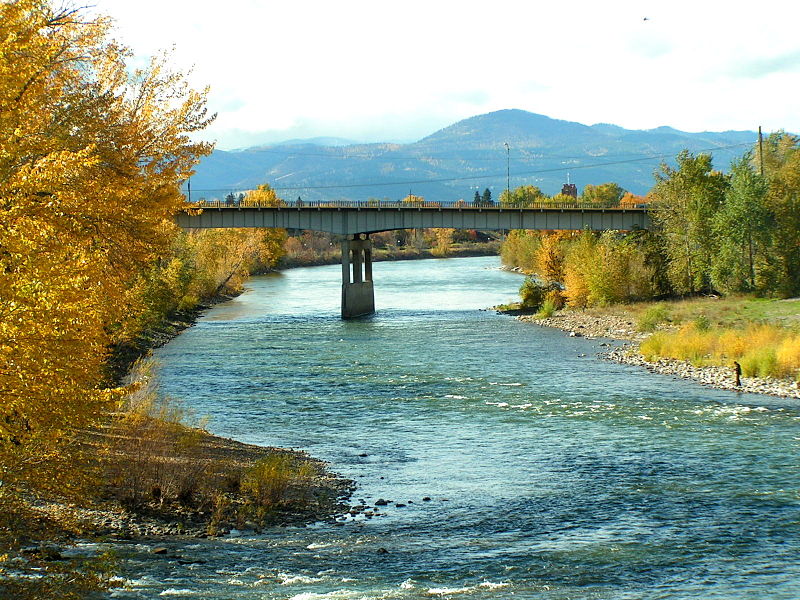 In 1893, Missoula became the home to Montana’s first university, The University of Montana. Around that time, multiple sawmills were established, in order to provide lumber for the railway and bridges being built in the area. This marked the beginning of Missoula’s lumber industry, which stood as the foundation of Missoula’s economy for the next hundred years. “The United States Forrest Service work in Missoula began in 1905.”

Logging became a crucial feature of Missoula’s economy when the Hoerner-Waldorf pulp mill was built in 1956. Although the Hoerner-Waldorf pulp mill was meant to help boost Missoula’s economy, many citizens protested the mill, as it caused a lot of air pollution and smog in the city. The smog was so apparent and thick, that many of Missoula’s citizens were forced to drive with their headlights on in the daytime. The recession of the early 1980s caused the need for lumber to decline, which forced Missoula’s economy to diversify. By the early 1990s, log yards were disappearing, which led to less pollution in Missoula’s sky. As of 2009, Missoula has two leading industries, education and heath care. Missoula, Montana is a beautiful area with lots of fresh air and beautiful outdoor sites to visit. 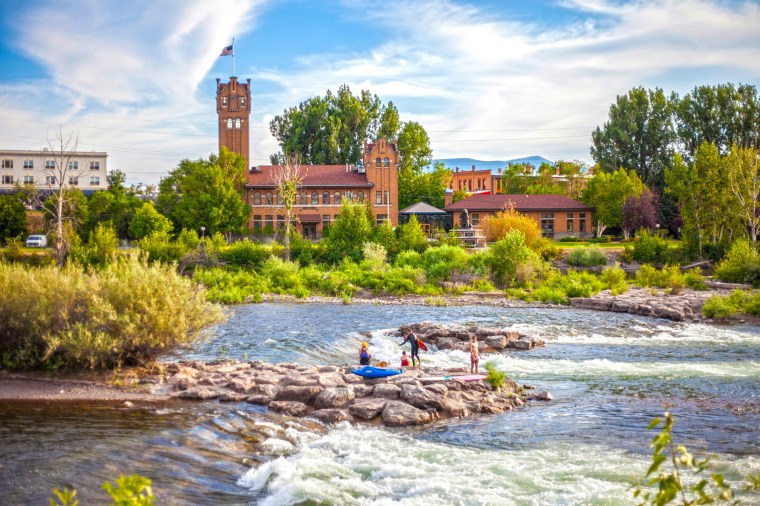 A Carousel for Missoula

A Carousel for Missoula is a volunteer-built, hand-carved carousel, located on the Clark Fork River in Caras Park in Downtown Missoula. The idea for a carousel to be created for Missoula started in 1988, when cabinetmaker Chuck Kaparich visited a carousel in Spokane, Washington, and read about Charles I. D. Looff, “a Danish immigrant who created Spokane’s now-antique carousel as a wedding present for his daughter Emma.” Kaparich was awestruck by the “beauty and craftsmanship of the ponies” and attempted to buy a horse off the carousel for himself.  Kaparich got in touch with Frederick Fried, “a carousel expert and author of ‘A Pictorial History of Carousels.'” After Kaparich explained to Frederick Fried how he wanted to buy a carousel horse, Fried replied, “It’s vultures like you who are causing the demise of the American carousel. If you want a carousel horse, don’t take it off a carousel; carve your own.” Kaparich started to carve his own horses and by August 1991, he had four ponies that he had carved himself. 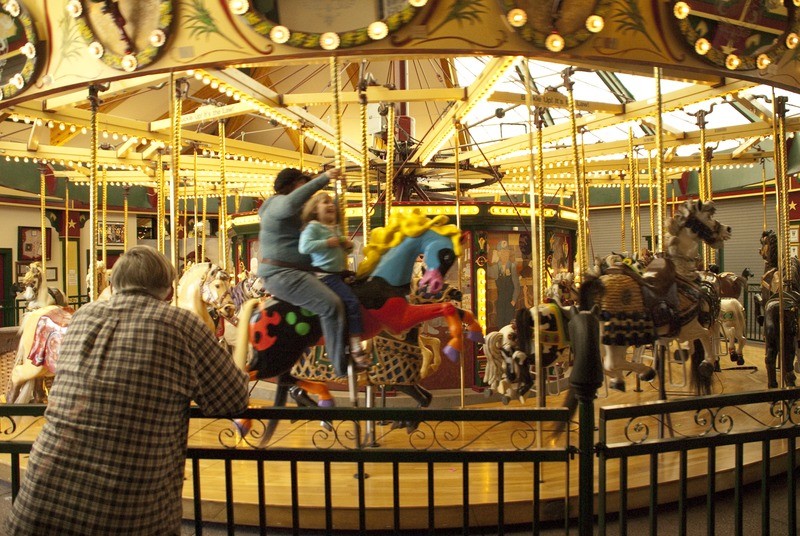 Pearl Cafe is a French restaurant located in Downtown Missoula. The menu at Pearl Cafe is filled with exquisite appetizers, entrees, desserts and wine. Pearl Cafe’s menu states: “The mission is simple: serve delicious food that guests will want to return to week after week.” What makes Pearl Cafe such a treat is their menu is filled with top choice items, but at very reasonable prices. The entrees at Pearl Cafe include Duckling with Pomegranate Cherry Sauce and Truffle Shiitaki Chevre Flan, Kurobuta Pork and Pear Mostarda, Bison Tenderloin, Idaho Trout and King Crab, Grilled Salmon with Mustard Butter, and Classic Filet Mignon. The desserts at Pearl Cafe include sorbet, ice cream sundae, butterscotch pudding, Winter Spice Cheesecake, French Apple Tartlet, Chocolate Kahlúa Mousse, and Crème Brûlée. Pearl Cafe also has an extensive list of white wine, red wine and dessert wine. It’s not difficult to understand why Pearl Cafe is TripAdvisor’s #1 recommended restaurant to dine at in Missoula.

Bob Marshall’s Biga (pronounced bee-ga) Pizza is a tasty pizza joint (also located in the Downtown area) in Missoula. All the food at Biga Pizza is prepared from scratch and is cooked in a brick oven. The menu at Biga Pizza was “inspired by classic flavor profiles.” Biga creates their pizzas, salads and sandwiches with seasonal ingredients, as a way to guarantee their guests “an unforgettable dining experience.” What makes the pizza unique at Biga Pizza is they take on an old ritual that comes from traditional bakeries in rural Italy, where the dough for a new day is started with “a bit of unsalted starter,” taken from the previous day’s dough. The starter (known as “biga”) helps create a “deeper, more complex flavor” as opposed to dough that was created with commercial yeast. The method Biga Pizza uses to make dough, “combined with the freshest produce, artisan meats and cheeses, unforgettable homemade sauces and creative toppings” is what makes the pizza at Biga Pizza so unique. Bob Marshall grew up in New Jersey and eventually moved to Missoula in 1990. He received a degree in Food Service Management and spent many years working in various restaurants. Bob Marshall opened Biga Pizza in 2006. Today, Biga Pizza is Trip Advisor’s #2 recommended restaurant to dine at in Missoula.

Iron Horse Bar and Grill is another culinary gem in Downtown Missoula, with a menu that includes an assortment of gastronomy creations that will leave your mouth watering. In addition to indoor seating, Iron Horse offers outdoor seating, so patrons can get a look at the beauty of the surrounding area of Downtown Missoula while they dine. The menu at Iron Horse Bar and Grill is full of delicious entrees that include salads and soups, but what really sets Iron Horse apart from other restaurants are their sandwiches and hamburgers that include the Tender 501 (Pan-seared beef tenderloin, crispy onions, Sriracha aioli on a parmesan hoagie), Salmon BLT (Pan-seared salmon, Daily’s bacon, tomato, greens, honey-curry mayo on Wheat Montana multigrain toast), and The Bison (1/2 lb. buffalo patty with chipotle bacon jam, Swiss cheese and crispy onions.) The Iron Horse also serves up some good old-fashioned comfort food like Grilled Cheese, Chicken Strips, and Fish Tacos. I had the opportunity to try the Ol’ Butte sandwich (Tenderized pork loin with pickle, onion, and beer mustard), which were 4 ingredients that tasted phenomenal paired together in a sandwich. While the appetizers and entrees all have their own unique twist, I personally believe the real star of the menu is located in the desserts section. The dessert I am referring to is ordinarily known as a fair food: Fried Chocolate Chip Cookie Dough. The Fried Chocolate Chip Cookie Dough (served with a scoop of Vanilla Ice Cream) at Iron Horse is done up perfectly and is a tasty finish to a great meal. Iron Horse Bar and Grill has a fun atmosphere and is a must-visit restaurant in Missoula’s Downtown District.

Missoula, Montana is great area in western Montana to visit (especially in the summer time) with family and friends. For more information about Missoula, visit a travel itinerary planner. 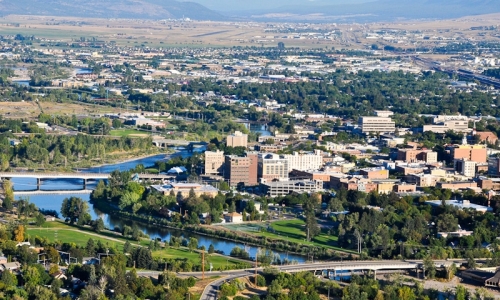